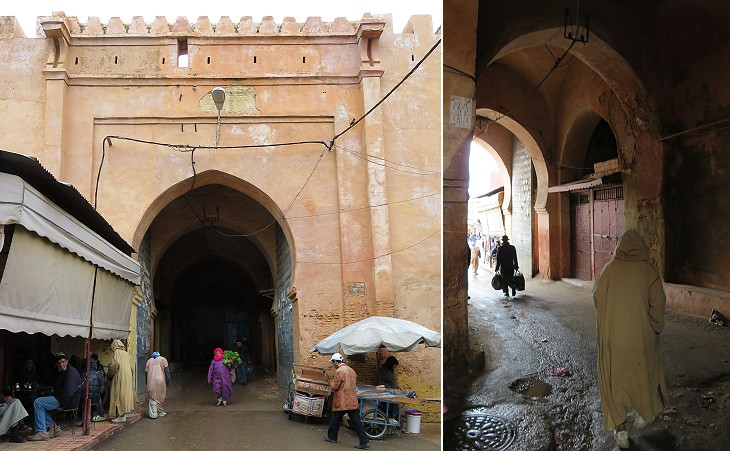 Bab Jdid, an old gate of the town which was not redesigned in the XVIIth century

This towne was so called after the name of the Mecnasites who were the founders thereof. From Fez it is 36. miles, about fiftie from Sella, and from Atlas almost 15. miles distant. It is exceeding rich, and containeth families to the number of six thousand. (..) Every monday they have a great market without the towne-walles, whereunto the bordering Arabians doe usually resort. Here are oxen, sheepe, and other such beastes to be sold: butter and wooll are here plentifull and at an easie rate. (..) This most strong and beautifull citie hath many faire streetes, whereinto by conducts from a fountaine three miles distant, is conveied most sweet and wholesome water, which serveth all the whole citie. The mils are two miles distant from the towne. The inhabitants are most valiant, warlike, liberall, and civill people, but their wits are not so refined as others: some of them are merchants, some artificers, and the residue gentlemen. (..) They are at continuall warre with the citizens of Fez; but whereupon this dissension of theirs should arise, I cannot well determine. (..) This towne is so durtie in the spring-time, that it would irke a man to walke the streetes.
Leo Africanus - The history and description of Africa: and of the notable things therein contained - 1526 - 1600 translation by John Pory 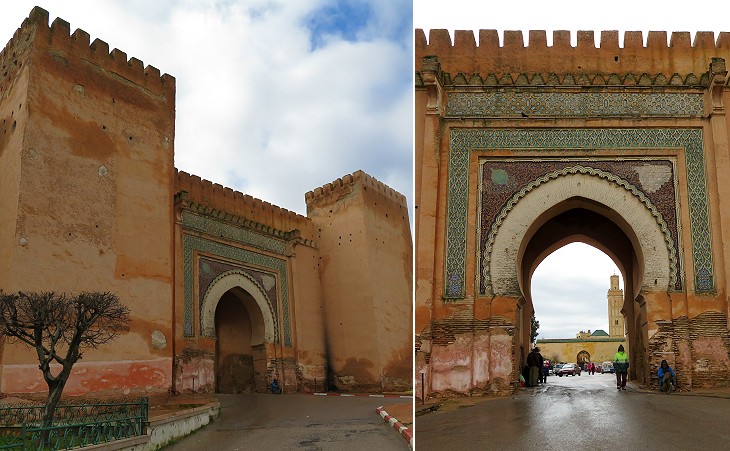 Bab Berdaine, a gate which was redesigned in the late XVIIth century

After Muley Ishmael (Sultan in 1672-1727) had united the small kingdoms which form the empire, he determined to have two imperial cities, that he might the more easily keep his people in subjection, by removing alternately from one to the other. Morocco (Marrakech) was the imperial city of the south and Mequinez, which that prince greatly embellished and enlarged, became the metropolis in the north.
Louis de Chénier - The Present State of the Empire of Morocco - 1788 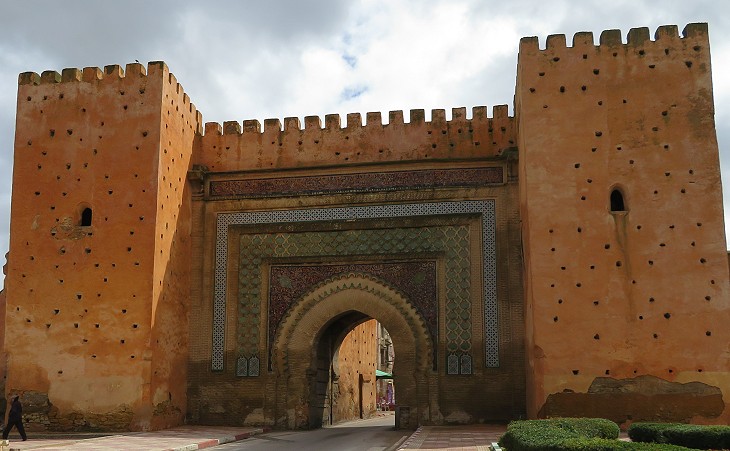 Bab el-Khemis, another of the monumental late XVIIth century gates and the icon of this section

The Historic City of Meknes (..) contains the vestiges of the Medina that bears witness to ancient socio-economic fabric and the imperial city created by the Sultan Moulay Ismail. (..) The two ensembles are surrounded by a series of ramparts that separate them from one another. (..) Behind the high defensive walls, pierced by nine monumental gates, are key monuments including twenty-five mosques, ten hammams, palaces, vast granaries, vestiges of fondouks (inns for merchants) and private houses, testimonies to the Almoravid, Marinid and Alaouite Periods. (..) In addition to its architectural interest of being built in the Hispano-Moorish style, Meknes is of particular interest as it represents the first great work of the Alaouite dynasty, reflecting the grandeur of its creator.
From the UNESCO synthesis of the universal value of Meknes which in 1996 was included in the World Heritage List.

(left) Vegetable market at Bab Berrima, a gate of the "Mellah" (Jewish Quarter); (right) a street near the Imperial City

Neere unto this towne runneth a little river: and within three miles thereof are most pleasant gardens replenished with all manner of fruits. Quinces there are of great bignes, and of a most fragrant smell; and pomegranates likewise, which being very great and most pleasant in taste, have no stones within them, and yet they are sold exceeding cheape. Likewise here are plentie of damascens, of white plums, and of the fruite called jujuba, which being dried in the sunne, they eate in the spring, and carrie a great number of them to Fez. They have likewise great store of figs and grapes, which are not to be eaten but while they are greene and new: for their figs being dried become so brittle, that they waste all to powder, and their grapes when they are made raisins, proove unsavorie. Peaches and oranges they have in so great quantitie, that they make no store of them: but their limons are waterish and unpleasant. (..) Their gentlemens wives never goe foorth of the doores but onely in the night season, and then also they must be so vailed and muffeled that no man may see them: so great is the ielousie of this people. Leo Africanus 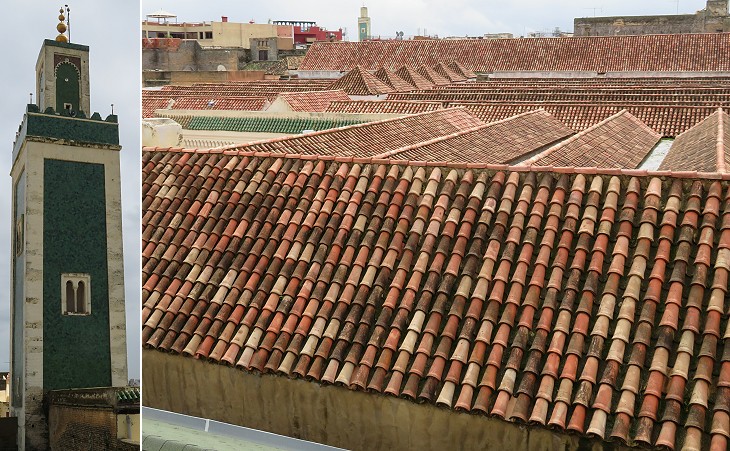 In this towne are most stately and beautifull temples, three colleges, and ten bath-stoves. Leo Africanus
Similar to the Great Mosque of Fez, that of Meknes is surrounded by small buildings and shops and its size can only be understood from a higher building. It was built in the XIth century and its minaret is typical of the pattern established by the Almohads in the late XIIth century at Seville, Rabat and Marrakech. Non-Muslims are not allowed to access the interior of mosques in Morocco. 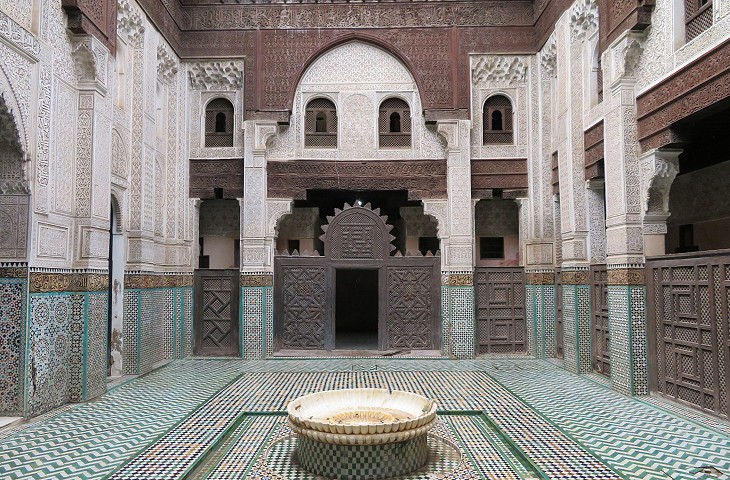 One college there is among the rest most beautifull and admirable to behold, which was erected by a certaine king called Habu Henon (Abou Inan, Sultan in 1348-1358). Leo Africanus. The sentence refers to a medrese in Fez which was built by the same sultan. Their design is very similar and it shows the existence of artistic exchanges between the court of the Marinid sultans and that of the Nasrid rulers of Granada. 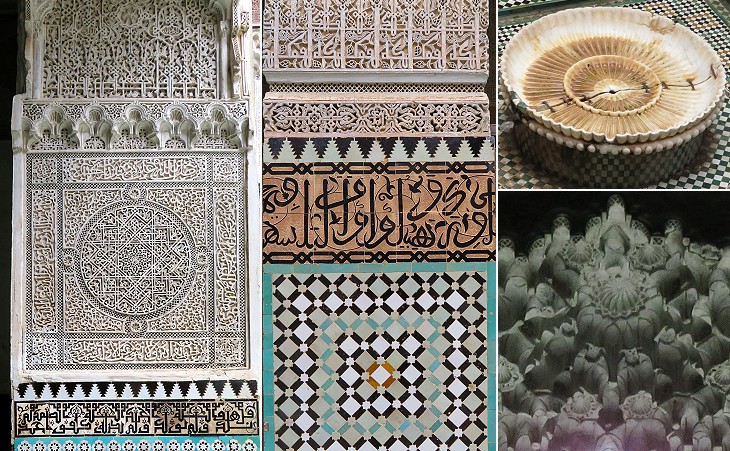 Plaster, wood, tiles and marbles were employed for the decoration of the medrese by very skilled artisans who were helped by calligraphers to develop decorative motifs which pleased the eye and at the same time had a religious significance. This decoration, aka mudéjar in Spanish, is also typical of many monuments built by the Christian kings of Spain, e.g. the Real Alcazar of Seville. 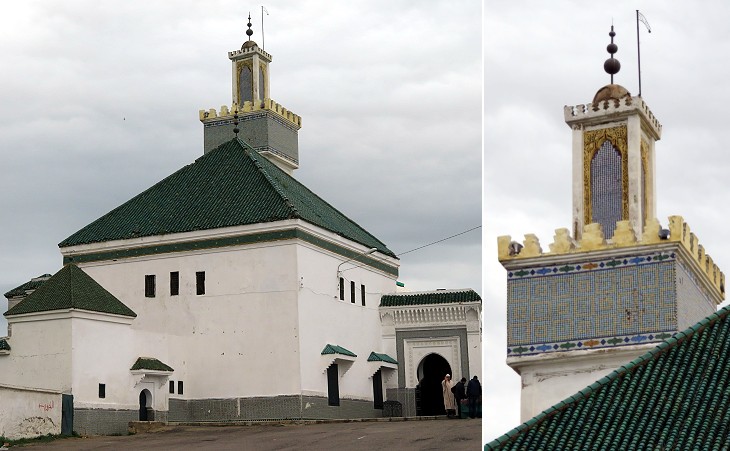 There is a sect in the south called Ben-Haissa, descendants of Joshua, who, in their wild fanatic devotion, run, leap, dance, and, extatic in this their intoxication, which becomes furious, they fall foaming upon any animal they find. A tale is related concerning a troop of these madmen, who once tore an ass in pieces with their teeth, and eat it up raw. Chénier
Moulay Ismail redesigned parts of the old town of Meknes, but the only major monument he built there was a mausoleum dedicated to Mohammed Ben Aouissa, a XVth century mystic teacher who was regarded as the patron saint (sidi means saint) of the town. It stands isolated on high ground outside Bab Jdid and every year a moussem (fair/pilgrimage) takes place in its vicinity. 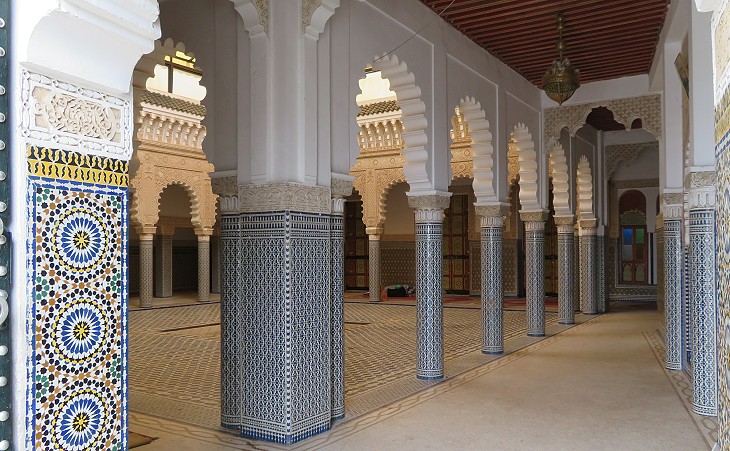 They make at Mequinez and Fez a kind of glazed tiles, similar to what we call Dutch tiles, of different colours; these they use to pave their rooms and face their walls, whence their houses have an air of coolness and neatness we do not meet with in other towns of the empire. Chénier
The image used as background for this page shows a detail of the tile decoration of a fountain. Moulay Ismail demolished a neighbourhood of the old town to create a large square from where the grand entrance to the Imperial City could be properly seen. The square was the gathering point to attend ceremonies, learn about the Sultan's decrees and also watch the punishment of culprits. It is still the place where families go for a stroll and a chat. 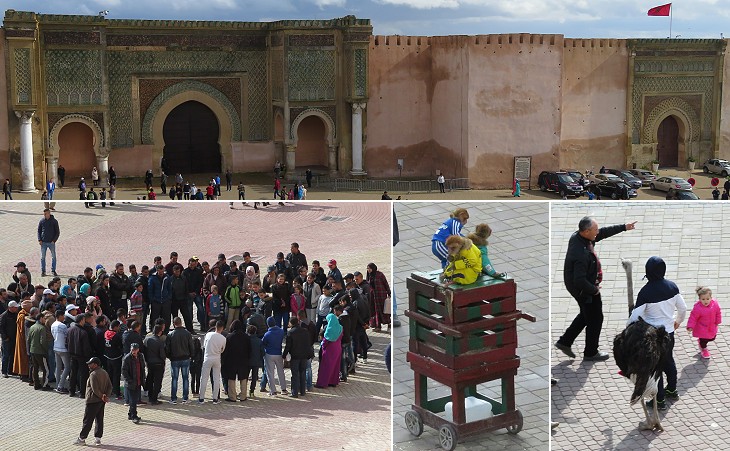 Move to Meknes - The Imperial City.