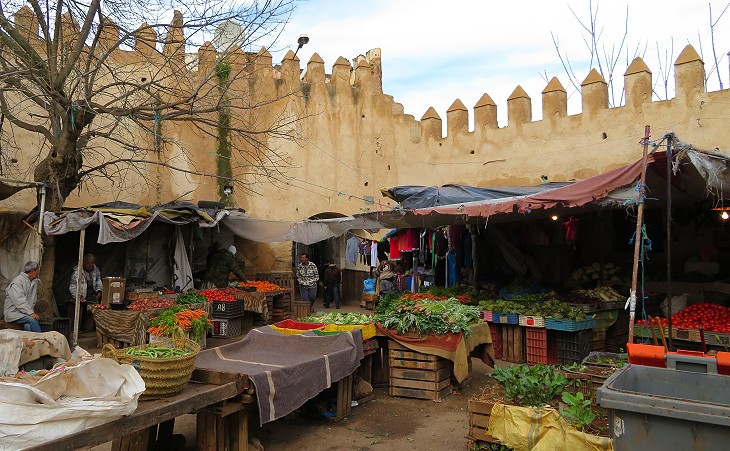 Of the towne of Sofroi. This towne being situate at the foote of mount Atlas, and standing about fifteene miles southward of Fez, almost in the way to Numidia, was built by the Africans betweene two rivers, on either sides whereof grow great abundance of grapes and all kinde of fruites. The towne for five miles compasse is environed with olive-trees: but the fieldes are apt onely for hempe and barlie.
Leo Africanus - The history and description of Africa: and of the notable things therein contained - 1526 - 1600 translation by John Pory
The economy of modern Sefrou is still based on agriculture; the town is particularly renowned for its cherries. 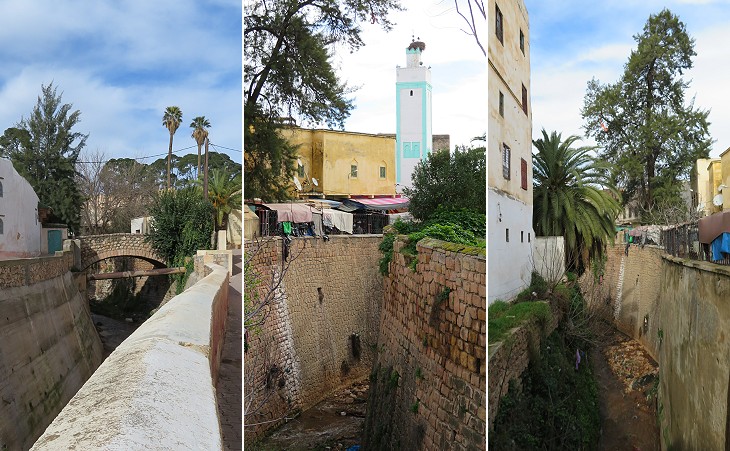 Uadi Aggai, the stream which separates the Muslim quarter from the Mellah, the Jewish one

The inhabitants are very rich, notwithstanding they goe in meane apparell, and greazie with oile, the occasion whereof is in that they carie oile unto Fez to sell. There is no memorable thing in all their towne, save onely a certaine temple, through the midst whereof runneth a large river, and at the doores standeth a fountaine of most pure water. Howbeit the greatest part of this towne is fallen to decay by the negligence of one of the kings brothers that now raigneth, and is ruined in many places. Leo Africanus 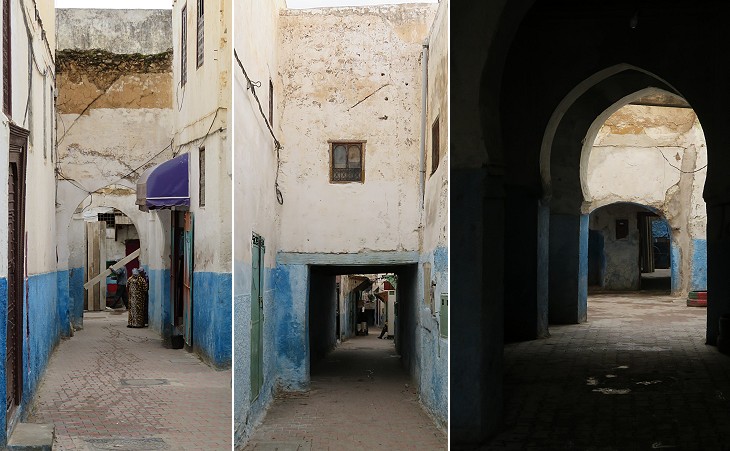 Streets in the Mellah

The presence of a large Jewish community in many Moroccan towns usually originated from a flow of Jewish refugees from Spain which began in the late XIVth century and ended after the Christian conquest of the Kingdom of Granada in 1492. In the case of Sefrou, which has a mellah almost the size of the Muslim town, it appears that a local large Jewish community already existed in the area when it was conquered by the Arabs in the VIIth century. The town is said to be older than Fez which was founded at the end of the VIIIth century. The construction of the mellah was ordered by the Marinid sultans in the XIVth century which confirms the size of the Jewish community at the time. By 1980 all the Jews had left Sefrou. 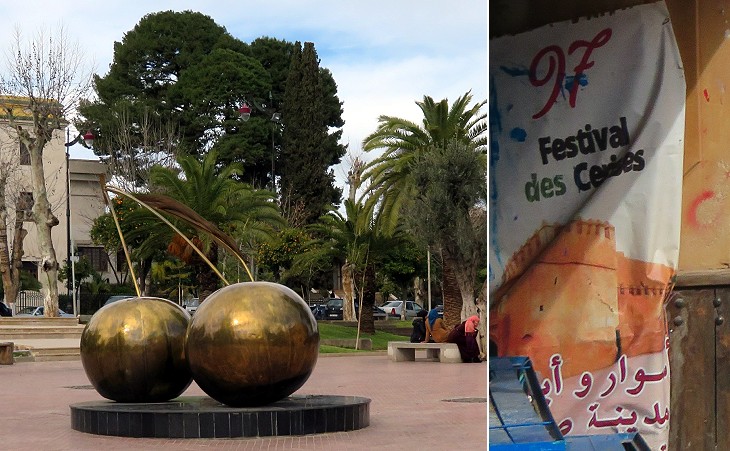 (left) Symbol of the town in the main modern square of Sefrou; (right) a poster of the 1997 Cherry Festival; for other good cherries you may visit Giresun in Turkey which gave its name to the fruit

For three days in June each year, the local population of Sefrou celebrates the natural and cultural beauty of the region, symbolized by the cherry fruit and that year's newly chosen Cherry Queen, selected during a pageant that draws competitors from the region and entire country. The highlight of the festival is a parade with performing troupes, rural and urban music, majorettes and bands, and floats featuring local producers. At the centre is the Cherry Queen, who offers cherries to onlookers while dressed ornately and surrounded by attendants. The whole population contributes to the success of the festival: craftswomen make silk buttons for traditional dresses, fruit growers supply cherries, local sports clubs participate in competitions, and music and dancing troupes animate the entire festival. The cherry festival provides an opportunity for the entire city to present its activities and achievements. The younger generation are also integrated into festival activities to ensure their sustainability. The festival is a source of pride and belonging that enhances the self-esteem of the city and its people and constitutes a fundamental contribution to their local identity.
From the brief synthesis of the rationale which led UNESCO to include the Cherry Festival of Sefrou in the Representative List of the Intangible Cultural Heritage of Humanity in 2012. 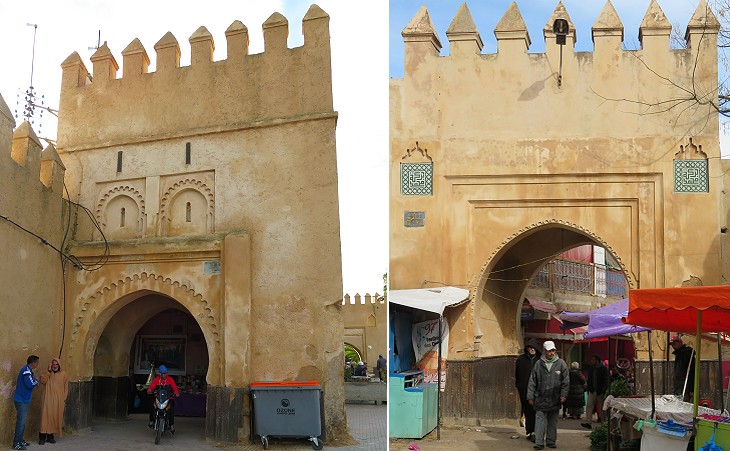 The walls were restored/redesigned in the early XIXth century. The western gate has arrow slits and the outer entrance is at an angle with the inner one. These features show it was part of a defensive structure. The southern gate is more recent and it was opened to facilitate movement between the old town and the modern one. 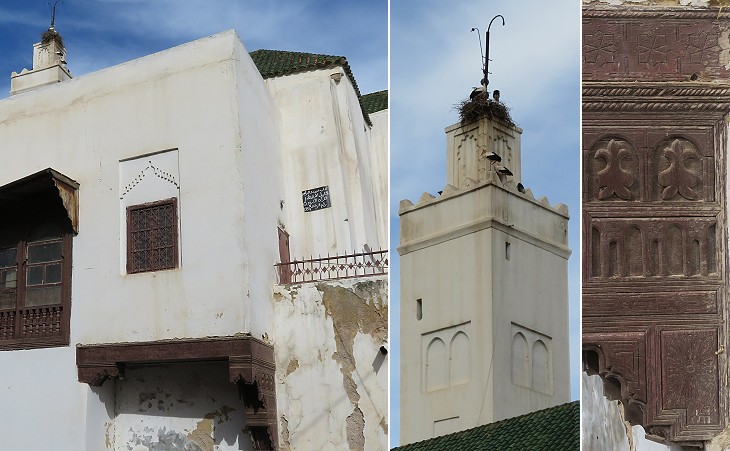 The Great Mosque stands right in the centre of the old town. It was mentioned by travellers of the XIVth century, but its minaret was built in 1662 in the usual Moroccan style which was developed during the Almohad tenure of the country when large square minarets were built at Seville, Rabat and Marrakech. The image used as background for this page shows a brass lamp at the entrance to the mosque. 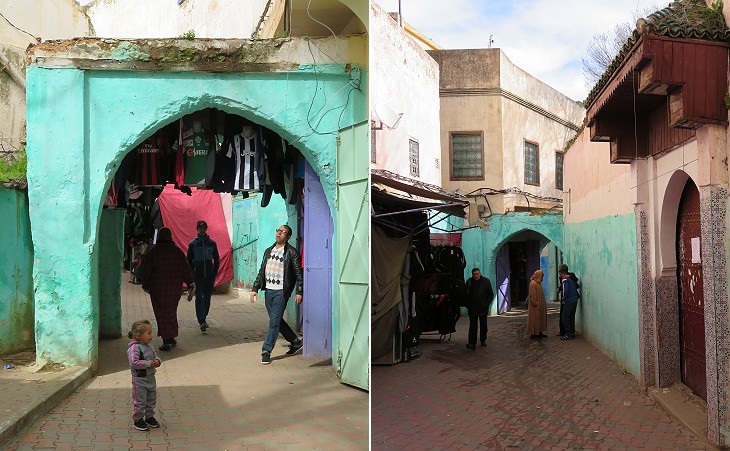 Views of the Muslim quarter

The medina of Sefrou provides the traveller with an opportunity for wandering about without being pestered by local guides offering their services as it occurs in more touristic cities. 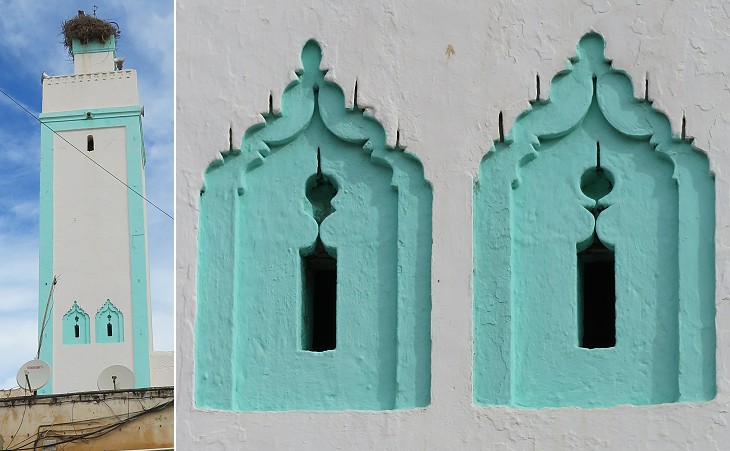 Minaret built in 1895 by the Adlun family for a zawiya (Koranic school). Storks can often be seen in Morocco: see those at Chellah