You may wish to see an introductory page to this section or a page on Sala Colonia, the Roman town which preceded Rabat and Chellah, a Marinid necropolis outside the walls of Rabat first. 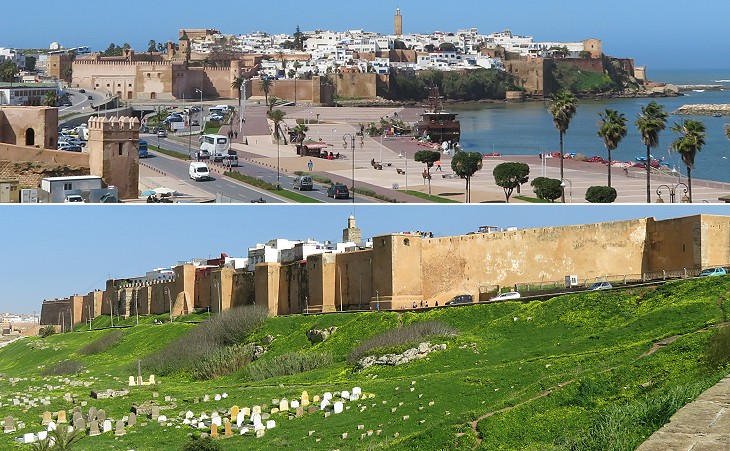 (above) Kasbah of the Udayas and the mouth of the River Bouregreg; (below) northern walls of the Kasbah

This great and famous towne was built not many yeeres agoe upon the Ocean sea shore. By the east part thereof runneth the river Buragrag, and there dischargeth it selfe into the maine sea. The rocke whereon this towne is founded, standeth neere the mouth of the said river, having the river on the one side thereof, and the sea on the other.
Leo Africanus - The history and description of Africa: and of the notable things therein contained - 1526 - 1600 translation by John Pory
The view of Rabatt on the opposite bank of the river has an extraordinary effect. It occupies the western and northern slopes of a pointed hill, crowned with picturesque buildings of considerable size, handsomely constructed with sand-stone of an Indian red colour, forming an agreeable variety and contrast to the everlasting flat-roofed, whitewashed edifices one beholds in the generality of Moorish towns. The lofty walls of these structures, whose dusky sombre aspect harmonizes well with their original design, comprehend the castle and the public prison, erected when the independent pirates of the place needed a strong place of confinement for their Christian prisoners.
Thomas Roscoe - The Tourist in Spain and Morocco - 1838 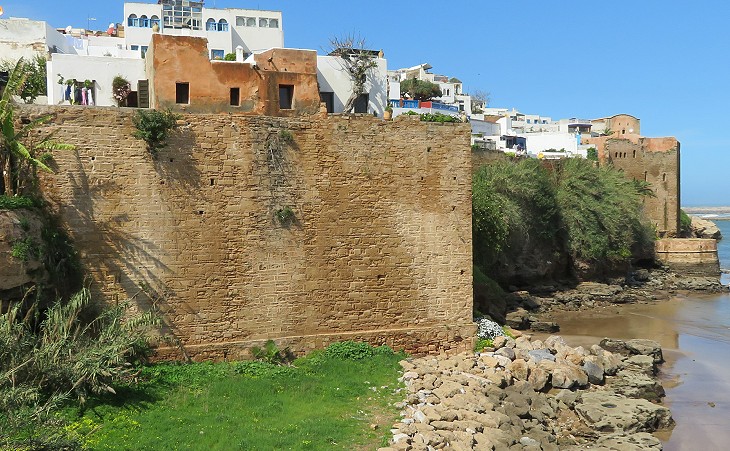 Kasbah of the Udayas: walls along the river and "Tower of the Pirates" to the right

On the south side of the river of Sallee is the town of Rabat. These two places are so near each other that they ought not to be separated. As they are united by the same interests, they for some time formed a kind of union, and were governed by the same magistrates; and it is only within these thirty years that the reigning Emperor has abolished this form of government.
Louis de Chénier - The Present State of the Empire of Morocco - 1788
The reference to the Udayas is relatively recent. The leaders of the Udaya tribe were confined to this fortress after they revolted at Fez in 1833. 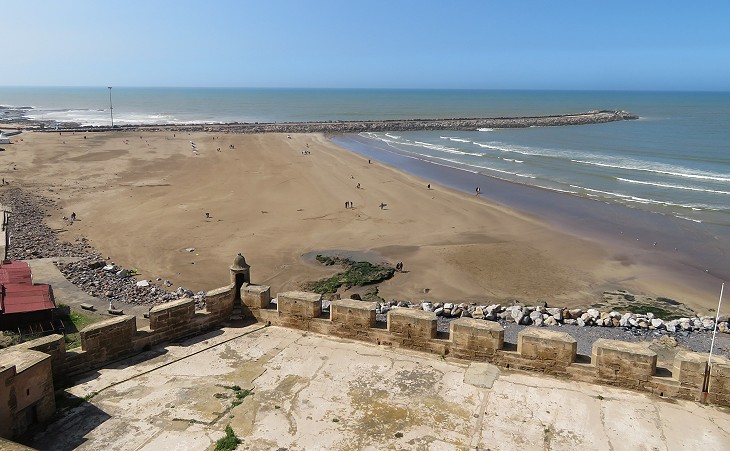 View over the Atlantic Ocean from the Kasbah

Rabat is located on the south bank of the River Bouregreg, which separates it from Salé. Rabat's name alludes to Ribat al-Fath, a fortress founded in 1150 by Abd al-Mu'min, the founder of the Almohad dynasty. During his reign the site became a small town with a mosque and a royal residence.
A ribat characterized the fortifications of several ports of Tunisia, e.g. Sousse and Monastir. Its defenders were very religious men who can be compared to monks or to knights of the Christian orders in the Crusader states. 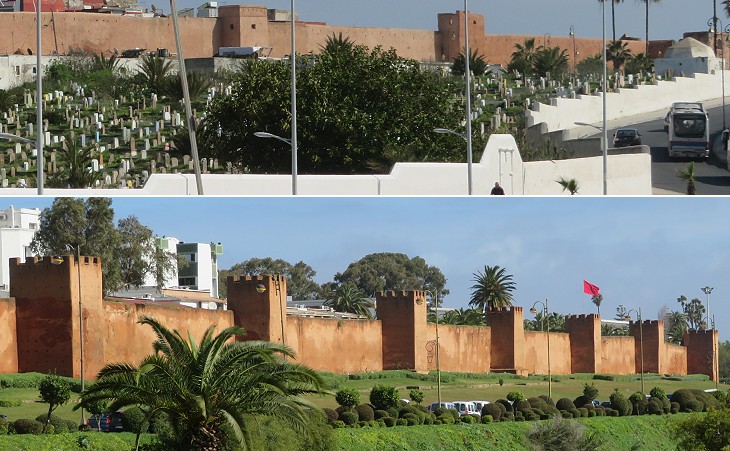 Western (above) and southern (below) Almohad walls

Jacob Almansor (Abu Yusuf Yaqub al-Mansur, Almohad Caliph in 1184-1199), being desirous to fix his residence at Rabat, and make it at the same time a place of strength, and the magazine of his arms, that he might from thence more easily pass into Spain, of which he was Sovereign, built the walls which still remain. They are near two miles round, and fortified by square towers. They enclose the castle, the town of Rabat, and a large space of ground, where that prince built beautiful palaces, and laid out delightful gardens, watered by plentiful streams which he brought from the neighbouring spring. These walls, as well as the palace and the town, were built by Spanish slaves, whom he took prisoners in his first campaign. Chénier 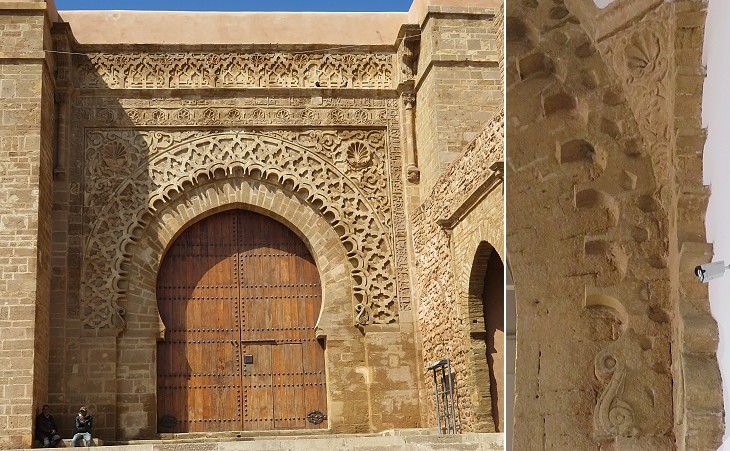 (left) Bab el-Kebir (the Great Gate) of the Kasbah; (right) detail of its interior highlighting a snake-like pattern

Morocco is indebted with the Almohad dynasty, not only for the territorial conquests in Spain, Algeria and Tunisia, but also for the imposing monuments they built which influenced Moroccan architecture in the following centuries and until the present day, in particular the gates of Rabat. Their design shows that the Almohads wanted them to celebrate the greatness of their rule and were not worried by their being not easy to defend. The horseshoe arch is a feature which was first developed in Spain by the Visigoths and then adopted by the Moors, especially in the design of the Great Mosque of Cordoba. 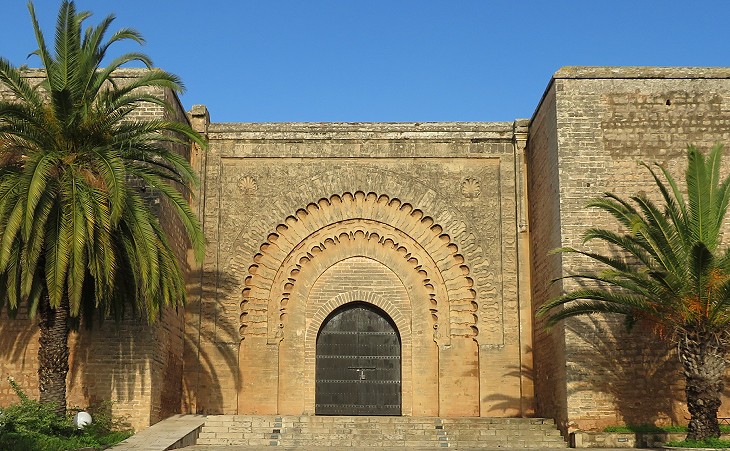 Built in 1197 by Yaqub al-Mansur, this monumental gate was the main land entrance to the town. The building comprised a series of small rooms for the activities related to the collection of duties on the goods entering the town. 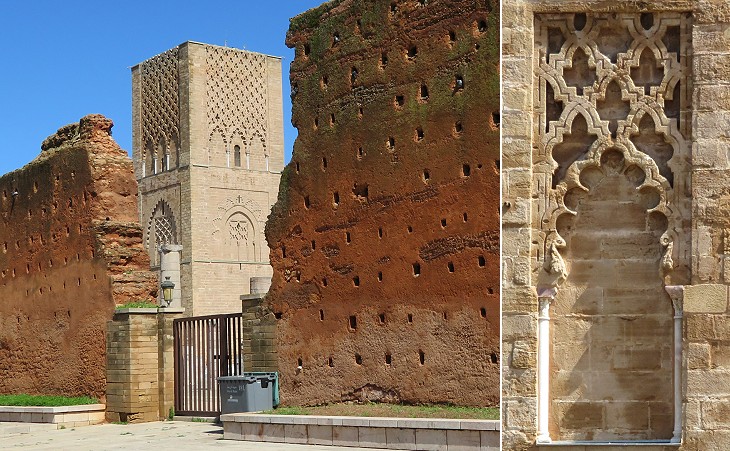 (left) Walls of the Great Mosque and Tour Hassan, its minaret; (right) detail of its decoration; the introductory page has other images of Tour Hassan

Jacob Almansor built within the same inclosure a very large mosque, the ruins of which still remain. The roof was supported by three hundred and sixty columns of rough marble. Beside the eastern front were apartments for those who had any employment in the mosque, and porticoes, which were still standing in 1773. On the opposite side was a handsome square tower, strongly built with cut stone, It is near two hundred feet high, and called the Tower of Hassen. This tower has the same form, the same ornaments the same staircase and the same proportions as those of Seville and Morocco (Marrakech); and, according to all tradition, is the work of the same architect. From this tower we have an extensive view over the sea, and ships may be discovered at a prodigious distance. This monument is in perfect preservation, not with standing the natural propensity of the Moors to destroy every things. Chénier
Right on the summit of a cliff, a little to the left of the ferry, rises a square tower, so remarkable that every traveller who visits the place must behold and admire it. Never was building more judiciously situated. (..) The whole surface of this extraordinary structure, which is justly esteemed one of the finest specimens in the world of Moorish architecture, is formed of sand-stone exquisitely carved. Roscoe 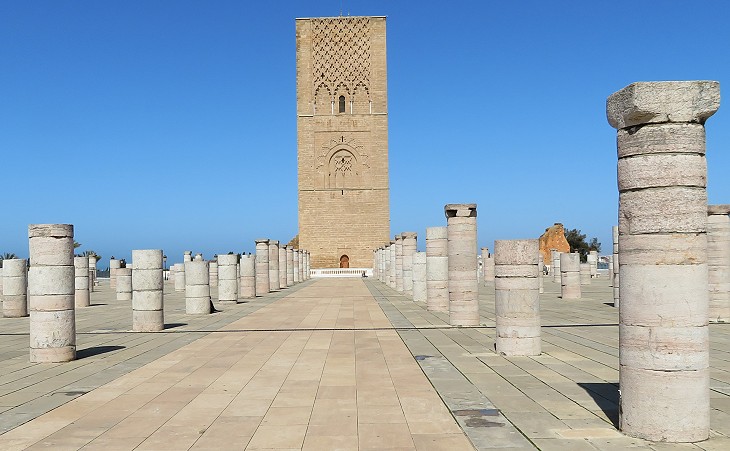 The mosque was commissioned by Yaqub al-Mansur to celebrate a victory against the King of Castile, al-Mansur meaning the Victorious. The mosque was to be one of the monuments to his victory, and it would have been one of the largest mosques in the Islamic world if fully built. The mosque was unfinished at the time of Yaqub's death in 1199, and his successors abandoned Rabat in favour of the more developed neighbouring city of Salé. The mosque was never completed.
The square minaret is another feature of the Almohad monuments which had a lasting impact on Islamic architecture. Because the Giralda of Seville was its best known example, art historians use the term Andalusian rather than Almohad for many minarets of Morocco, Algeria and Tunisia, including some very modern ones, e.g. that of the Great Mosque of Tunis. 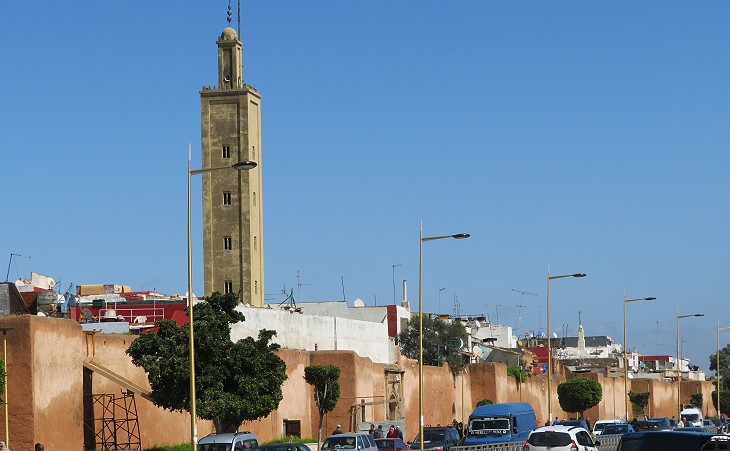 Rabat was conquered by the Marinid dynasty in 1248; the new rulers left their mark in the construction of Chellah, a necropolis on the site of Sala Colonia, an ancient Roman town. Rabat lost importance in respect to Salé until an influx of Muslim refugees from Spain gave new impulse to its economy in the XVIth century. 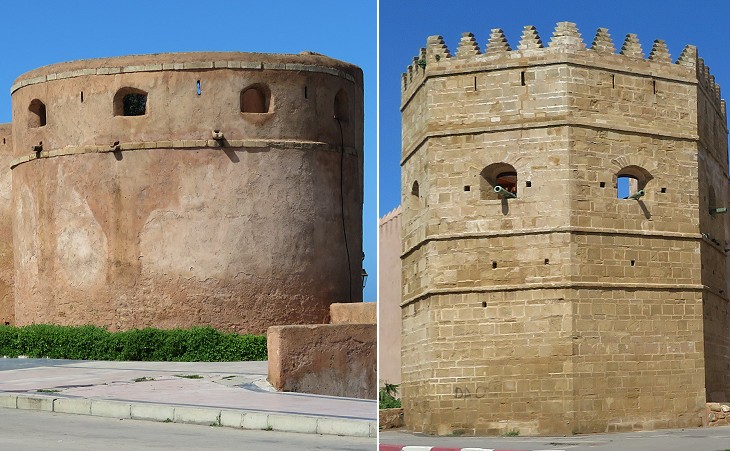 XVIIth century fortifications: (left) Borj Sidi Makhlouf at the end of the Andalusian walls; (right) a much restored tower at the Kasbah of the Udayas

Piracy was a major source of revenue for Rabat during the XVIIth/XVIIIth centuries and its fortifications were strengthened to withstand attacks from Christian fleets. 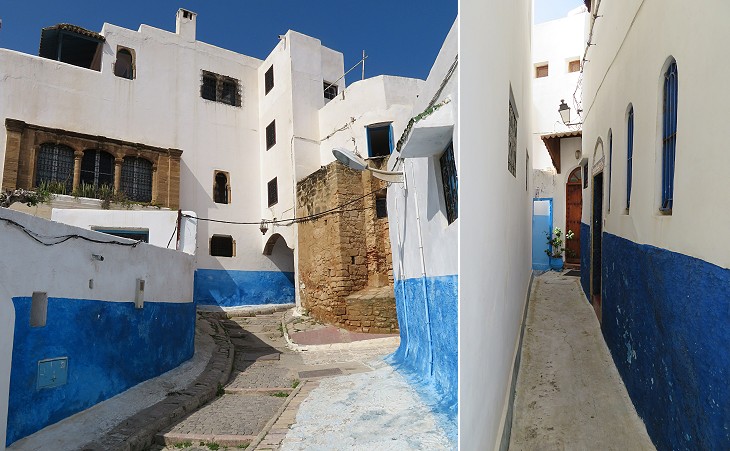 We were led by a tall fine Moor of commanding appearance to a very handsome house, which was entirely at our disposal so long as we might choose to stay. We expressed our thanks in a becoming manner, and he left us to provide, as we imagined, for ourselves. (..) A loud knocking was heard at the door, and on its being opened, our friendly Moor entered at the head of a cortege of black slaves, each bearing a covered dish upon his head. The governor, we were informed, had sent us a dinner, and requested we would believe ourselves welcome. Upon this a number of trays were placed in the dining-hall on the floor, the dishes were set beside them, and each slave falling back as he deposited his burden, the whole soon formed into a file and disappeared through the street door, with their gallant commander at their heels, almost before we could say how greatly we felt obliged for such princely hospitality. I wish I knew the names of half the dishes, of which we were not slow in making the acquaintance. Hunger might have something to do with the matter, but I certainly never tasted any thing in the shape of food that appeared so delicious. The most prominent article was, of course, kouskasou (couscous). (..) A sufficient time having been allowed us to eat and digest our dinner, a fresh troop arrived, bearing tea, coffee, eggs, milk, and whatever else the most fastidious gourmand could desire for his evening meal; and all in such profusion, that had our number been trebled, there would still have been enough and to spare. Roscoe 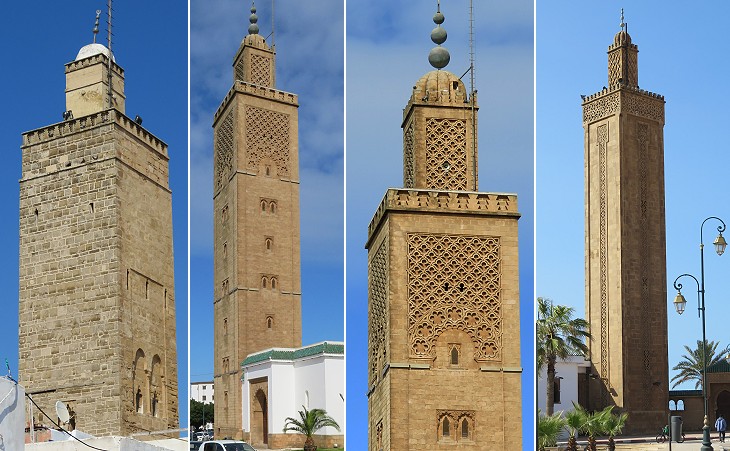 Minarets: (left) El-Atiqua in the Kasbah; (centre) As-Sounna (1785); (right) a modern minaret outside the walls opposite Bab el-Alou

We were, of course, too happy to view the city (..) and set out immediately on the expedition. The guide first took us along the ramparts, which we thought the most agreeable promenade in the world, more particularly the walls on the summit almost of the hill, from which we could look, down over the whole city, sloping beneath our feet to the margin of the Atlantic. (..) As the population amounts to seven or eight and twenty thousand, it will easily be supposed that the mosques are numerous; nevertheless, their minarets are neither lofty nor so finely constructed as some I had seen in other towns, though, relieved against the deep blue of the ocean, they had a fine effect upon the eye, surrounded as they are in many cases by clusters of tall date trees. Roscoe 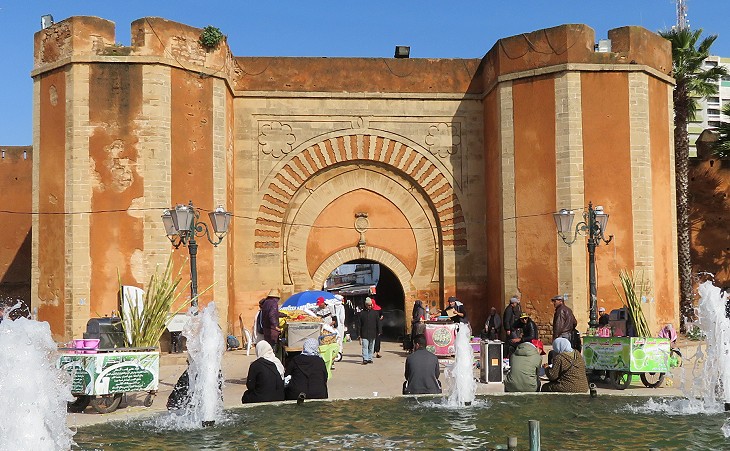 Bab el-Had, a gate of the Almohad period which was redesigned in 1814