You may wish to see an introductory page to this section or a page on the ancient town first. (above) View of the Strait of Gibraltar; (below) enlargement showing (left) the white houses of Tarifa and (right) Cape Malabata at the eastern end of the Bay of Tangier

The situation of the bay of Tangiers is, and always will be, favourable to Moorish piracy, who, from this, the narrowest part of the Strait, may easily surprise merchant ships, that are incapable of defence.
Louis de Chénier - The Present State of the Empire of Morocco - 1788
This place, is most advantageously situate in the narrowest part of the Straits of Gibraltar, at a few miles east of Cape Spartel, and thirty miles W.S.W. of Gibraltar, and has, therefore, been coveted by all the conquerors of North Africa.
James Richardson - Travels in Morocco - 1860 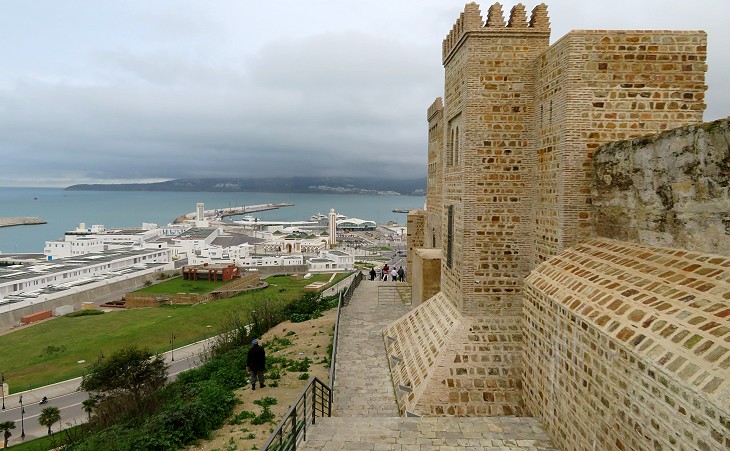 The modern Tangier is a small city, picturesquely placed on the eastern slope of a hill, which terminates in the west with its port and bay. (..) It has almost a square form, and its ramparts are a wall, flanked here and there with towers. Richardson
Today the population of Tangier is in the region of 1,000,000. The medina (walled town) and the adjoining kasbah (fortress) were not affected by the development of the modern town. 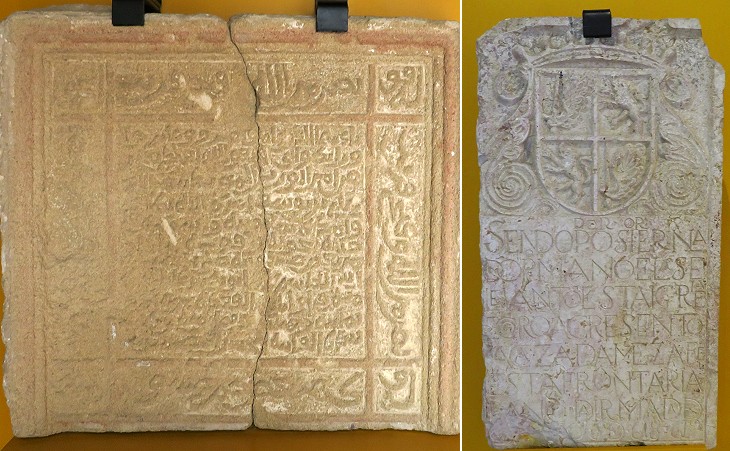 Museum of the Kasbah: (left) 1454 inscription from Porta de Ceuta at Ksar es-Seghir; (right) Portuguese gravestone from Tangier (see other Portuguese memories in the introductory page)

I left Tangier, my birthplace, on (14th June, 1325), being at that time twenty-two years of age, with the intention of making the Pilgrimage to the Holy House and the Tomb of the Prophet. I set out alone, finding no companion to cheer the way with friendly intercourse, and no party of travellers with whom to associate myself.
H. A. R. Gibb - Selection from the Travels of Ibn Battuta in 1325-1354
In the early XIVth century the Portoguese began developing a military fleet with the help of a Genoese admiral. In 1340 a Portuguese fleet was instrumental in repelling an attempt by the Marinid rulers of Morocco to invade Spain. In 1458 the Portuguese conquered Ksar es-Seghir, a small port east of Tangier from which the armies of the Moors moved to the conquest of Spain in 711. In 1471 the Portuguese strengthened their control over the Strait by conquering Tangier.
In my time Mahumet king of Fez left no meanes unattempted for the recoverie of this citie, but so great alwaies was the valour of the Portugals, that he had ever ill successe. These things were done in the yeere of the Hegeira 917, which was in the yeere of our Lord 1508.
Leo Africanus - The history and description of Africa: and of the notable things therein contained - 1526 - 1600 translation by John Pory
The image used as background for this page shows Portuguese tiles from Ksar es-Seghir which was abandoned by the Portuguese in 1550 after having demolished its fortifications and harbour facilities. 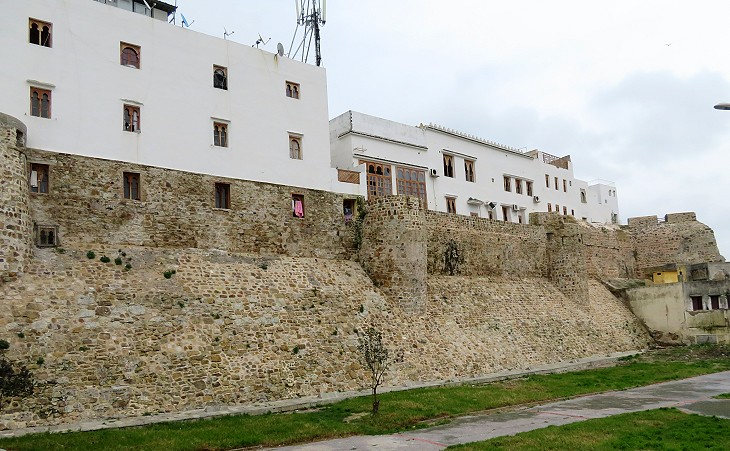 In 1662 Tangier came into the hands of the English, as a part of the dowry of Catherine, queen of Charles II.; so, whilst in our possession it was a place of considerable strength; but on its evacuation in 1684 by order of the English government, who were disgusted by the expense of its occupation, and the bootless collisions with the natives, the fortifications were demolished, and only the vestiges of them now are visible. Richardson 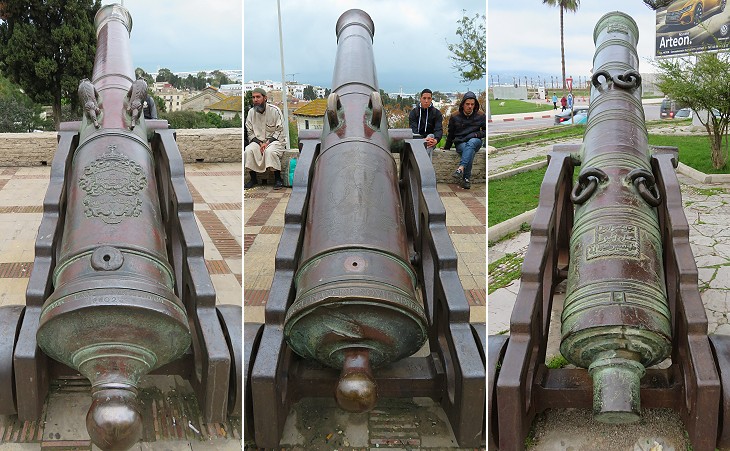 One of the bronze guns was a long thirty-two pounder Spanish gun, bearing the date of 1780. It had also a name, "Lastimoso" (the Pitiful), engraved on it. The Spaniards had a practice of naming their guns; but why this particular epithet should be given to such a destructive implement is not obvious.
Arthur Leared - Marocco and the Moors - 2nd edn. 1891
Tangier endured a series of attacks by European powers in retaliation for piratical activities. In 1790 it was shelled by the Spaniards, in 1828 by the British and in 1844 by the French. In the meantime it became a diplomatic and commercial centre for relations between Morocco and foreign countries. The United States of America opened a Legation there in 1821. 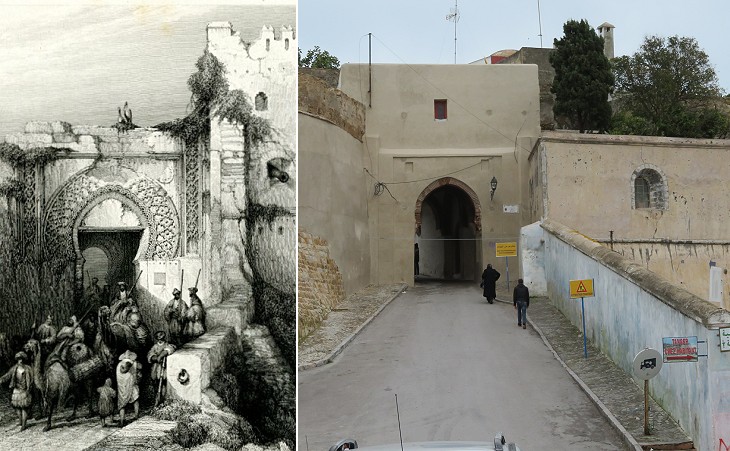 We anchored off Tangiers, in Africa. (..) It soon became evident that we had got into a world altogether new to us. The very character of the shore was different from any thing we had hitherto beheld, though it would have been difficult, perhaps, to define precisely in what that difference consisted. There was something, no doubt, in the peculiar vegetation of the climate. Palm trees, with their long pendulous branches, rose here and there upon the beach, in some places clumped into small groves, in others scattered singly; and acacias, and other trees indigenous to Africa, clothed several points of the coast with a beautiful green. But the most remarkable portion of the scene, after all, were the figures; and those were truly original, and pressed upon the eye the moment we landed. Bedouins from the desert with their camels, Negro slaves, Jews, Moors, Arabs, in every imaginable variety of costume and colour, and grouped in the most fantastic manner.
Thomas Roscoe - The Tourist in Spain and Morocco - illustrated from drawings by David Roberts - 1838 Roberts is best known for his later drawings in Egypt (it opens in another window) and the Holy Land, including Petra. His drawings and the narrative by Roscoe made Tangier a "most picturesque town" which became within easy reach of Europe after the development of steam navigation. 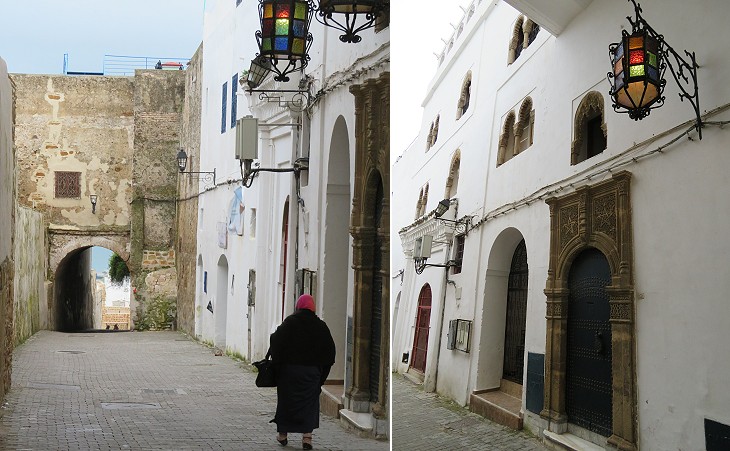 To return to the castle: our way into the interior of this building, which has never been delineated by any other European, was opened by gold, which, if possible, is still more powerful in Mohammedan countries than in our own. Our movements, however, were watched, and the officer on guard, who had not shared in the bribery, reported the case to the governor. Formerly this might have been followed by unpleasant consequences; but, fortunately for us, the governor was a man of sense and moderation, who probably also lay under some obligations to the party that accompanied us: at any rate, he offered us no molestation. This fortress, which appears to have been once a place of considerable strength, is now in a very dilapidated state. (..) But if the place has little to recommend it in a military point of view, its merits on the score of the picturesque are not a jot the less on that account. Roscoe 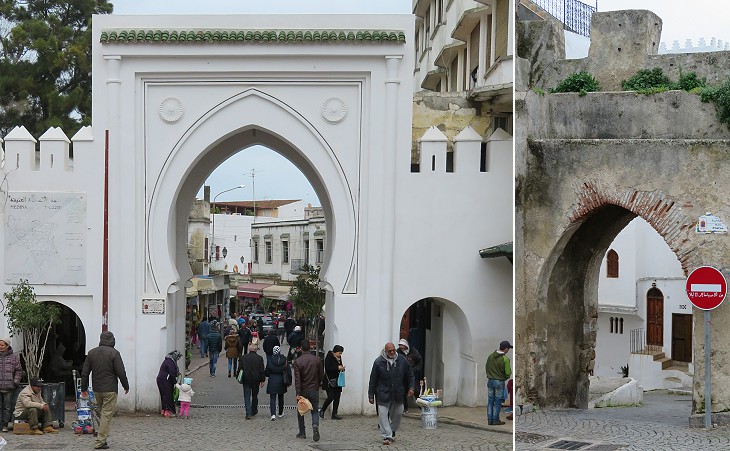 On the following morning, which was Friday, the sabbath of the Mohammedans, we strolled about, sketching the several buildings, gates, etc. that are found at Tangiers. Among these, the most remarkable are the entrance to the town from the land side, the entrance to the castle, the treasury in the interior of the castle, and the town from the sea-shore. Roscoe
We have had enough of Spain at Gibraltar for the present. Tangier is the spot we have been longing for all the time. Elsewhere we have found foreign-looking things and foreign-looking people, but always with things and people intermixed that we were familiar with before, and so the novelty of the situation lost a deal of its force. We wanted something thoroughly and uncompromisingly foreign - foreign from top to bottom - foreign from center to circumference - foreign inside and outside and all around - nothing anywhere about it to dilute its foreignness - nothing to remind us of any other people or any other land under the sun. And lo! In Tangier we have found it. Here is not the slightest thing that ever we have seen save in pictures - and we always mistrusted the pictures before. We cannot anymore. The pictures used to seem exaggerations - they seemed too weird and fanciful for reality. But behold, they were not wild enough - they were not fanciful enough - they have not told half the story. Tangier is a foreign land if ever there was one, and the true spirit of it can never be found in any book save The Arabian Nights.
Mark Twain - The Innocents Abroad - 1869 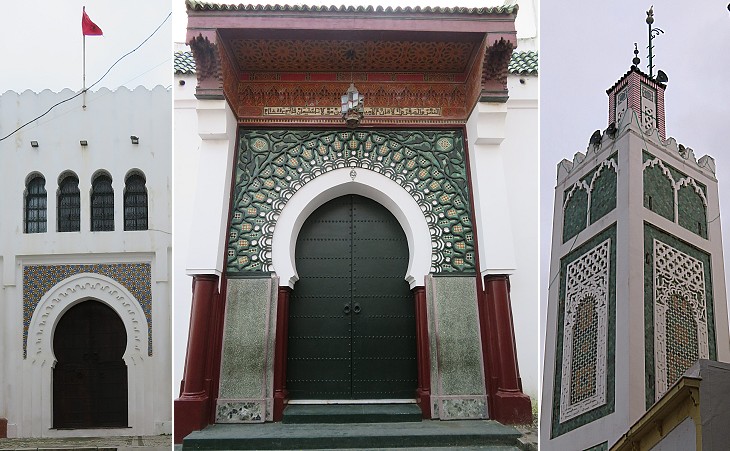 (left) Entrance to the Museum of the Kasbah (a former palace of the Sultan); (centre/right) Great Mosque and its minaret

Towering far above the private buildings we behold the square minaret, with its stone-wrought galleries, of the great mosque; and crowning the heights towards the north is the castle, which, though dilapidated, forms a striking feature in the landscape. Roscoe 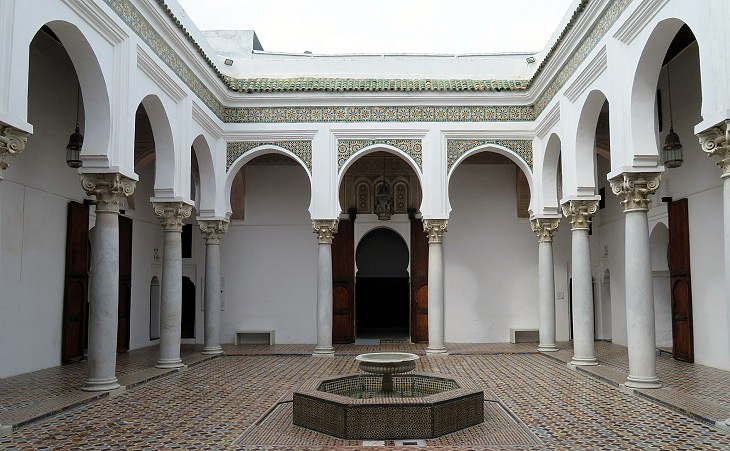 Museum of the Kasbah: courtyard

The floors are generally paved with small coloured tiles, as in the older houses of France and Holland; which renders them at once cool and gay, and facilitates the keeping of them clean. Here, as elsewhere in the East, the houses are built round a small court yard, into which all the windows open. There are seldom more stories than one, and the rooms though narrow are spacious and lofty, and fitted up in a style admirably suited to the climate. Roscoe
The doors are arched with the peculiar arch we see in Moorish pictures; the floors are laid in varicolored diamond flags; in tesselated, many-colored porcelain squares wrought in the furnaces of Fez; in red tiles and broad bricks that time cannot wear. Twain 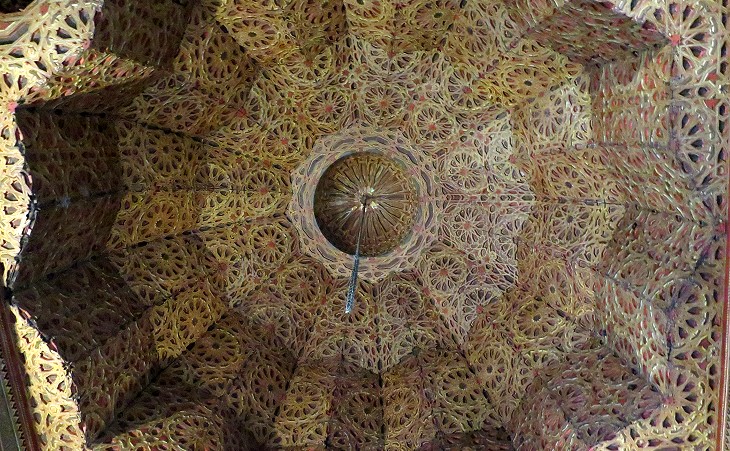 The Museum houses Navigium Veneris, a very fine Roman floor mosaic from Volubilis, in addition to exhibits from the Portoguese and Moroccan tenures of the town.
In 1912 a Spanish Protectorate was established on Northern Morocco. In 1923 Tangier acquired the status of International Zone under a joint international administration. It was reunited to Morocco in 1956. 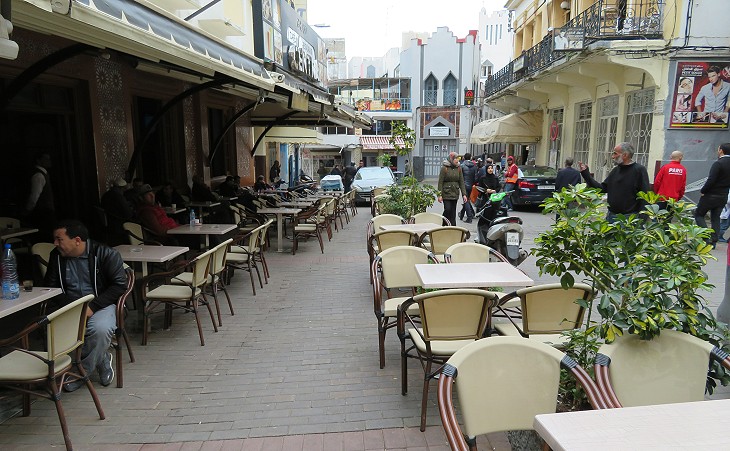 In the evening, when the sun gets low, the Sok is the resort of story-tellers and jugglers of various kinds, in whose tales and feats the Moors take great delight. There was one old fellow to whom it was always a pleasure to listen, although I never obtained more than a faint outline of his stories through an interpreter. With some of his tales we are familiar in the Arabian Nights' Entertainments; others were fables, in which the lower animals bore a leading part. A crowd of men and boys seated in a semicircle was in front of him, while the old man, with the utmost vivacity and great skill, suited his voice and movements to his stirring narratives. It was curious to observe the riveted attention, and hear the bursts of laughter of the swarthy audience. Copper coins were thrown to him pretty freely as a reward for his exertions. Snake-charmers also exhibited their feats. Leared 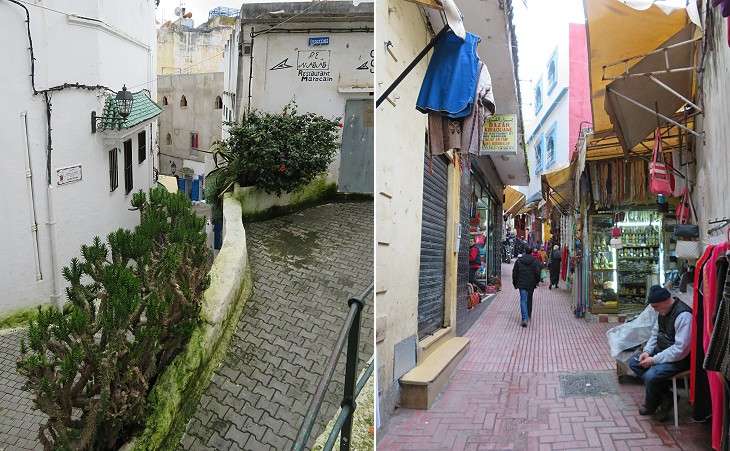 There are some Moorish coffee-houses in Tangier, and I visited one with my guide. It was a moonless night, and travelling over the uneven streets was difficult and even risky. At last, after groping our way through many winding and narrow lanes, we came to a spot where a portion of the street was covered in by a roof of interlaced boughs. Beneath this a number of men were lying about, some singing, others asleep; they were an unprepossessing set to meet in the dark. At first we could only distinguish their white turbans and teeth, but gradually their dark and stalwart forms became visible. Entering a door close at hand we found ourselves in a small room with whitewashed walls and matted floor. Men were squatting about smoking cigarettes and drinking black coffee mixed with the grounds as in Turkey. There, was the customary charcoal stove for boiling coffee; and the place, dimly lighted by an oil lamp, had a sufficiently lugubrious appearance. I could not learn that the Tangerines indulge to any great extent in the use of hashish, although it is known to them. Leared 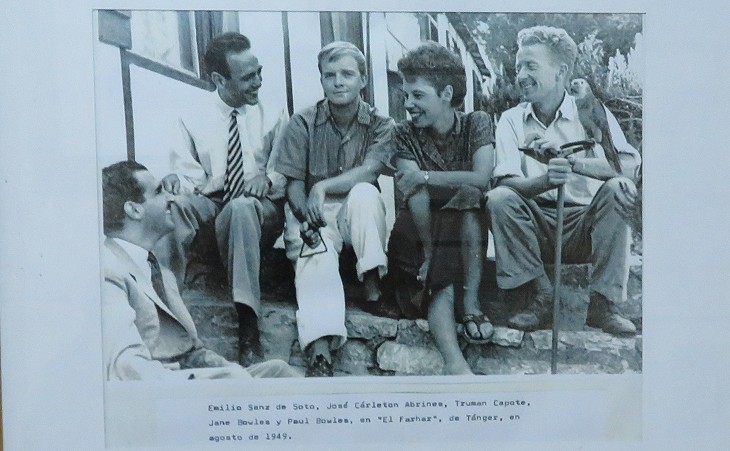 1949 Photo at the American Legation of Tangier

I must try to set down a few more impressions of Tangier. Saturday the 29th we spent mostly in resting up from the hashish experience. (..) All of the people we met in Tangier had taken hashish at one time or another.
Cristopher Isherwood - Diaries - November 1955 - Methuen 1996