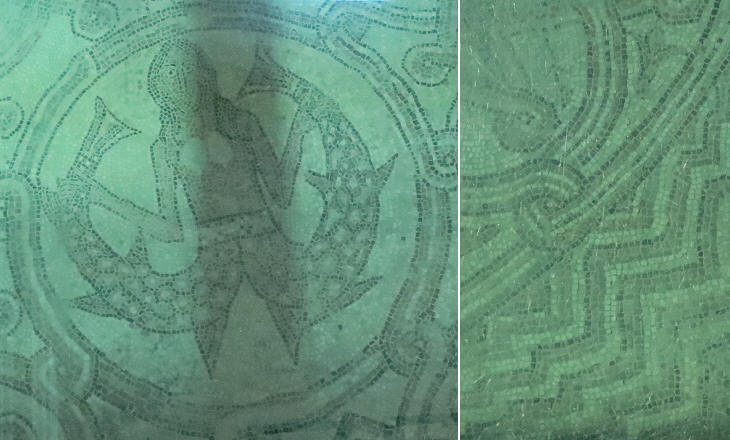 The overall square shape of today's Pesaro, some walls and the site of a domus (house) are the remaining evidence of Pisaurum, a colony the Romans founded in 184 BC at the mouth of the River Foglia, a small stream. They had to drain a coastal marsh to build the town which was crossed by Via Flaminia, an important Roman road which linked Rome to Ariminum (Rimini).
In 1866, during an almost total renovation of the interior of the Cathedral, two sets of floors decorated with mosaics came to light. The lower one belonged to a church of the IVth century, the upper one to a VIth century church renovated at the time of Emperor Justinian. The size and decoration of the floors indicate that Pisaurum was a town of some importance and wealth. The upper mosaics were modified in the XIIth century. 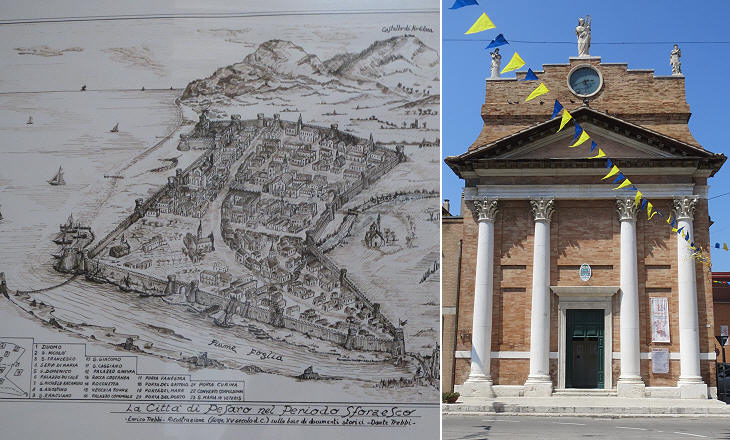 When European economy and trade grew after the year 1000, the mouth of the Foglia became a small port which provided an important resource for the economy of Pesaro. A chain between two towers on the banks of the river protected it from attacks by enemy ships. In 1857 the Foglia was diverted to allow the expansion of the town and today the former riverbed is covered by a large alley which leads to the beach. Sailors and fishermen lived in a neighbourhood on the northern bank of the river, opposite the town, and S. Maria del Porto, the small church where they attended mass, is the only remaining evidence of the old harbour. The church was founded in 1525 and renovated in 1828. 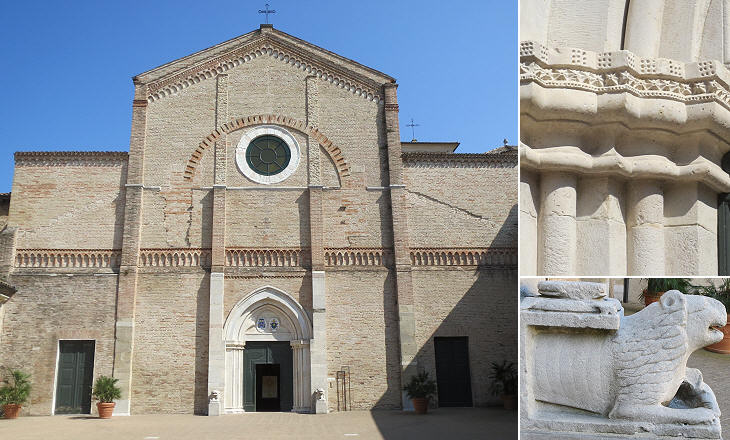 In the late XIIIth century the inhabitants of Pesaro decided to rebuild the Cathedral, because it stood at a level lower than the street. A new floor covered the mosaics. Only the façade retains the original Romanesque aspect and some of its brickwork decoration. The Gothic portal has a rather plain decoration, when compared to that of churches built in the following century. 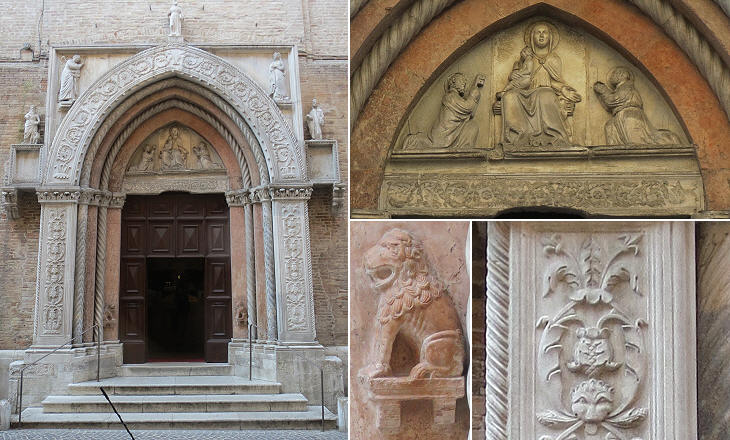 S. Francesco: Gothic portal and details of its decoration, including a lion, heraldic symbol of the Malatesta, rulers of the town from 1285 to 1445

From a religious viewpoint the XIIIth century began with the Crusade against the Cathars launched by Pope Innocent III in 1208 which ended with the almost total massacre of the heretics. At almost the same period the Church of Rome endorsed the foundation of the Franciscan and Dominican Orders and in 1244 of the Augustinian one. These three Orders had a major role in promoting a spiritual renovation of the Catholic Church and they founded monasteries in all the main towns, usually in different neighbourhoods.
In Pesaro the Franciscan, Dominican and Augustinian churches all have an elaborate Gothic portal. That of S. Francesco was built in 1356-1378. At Assisi and other Umbrian towns, the Franciscans had decorated their churches with a local pink stone (see S. Chiara in Assisi) and in Pesaro they did the same with a reddish stone quarried near Verona, but known as pietra d'Istria, because the Venetians quarried it in Istria, a peninsula in the northern Adriatic Sea. 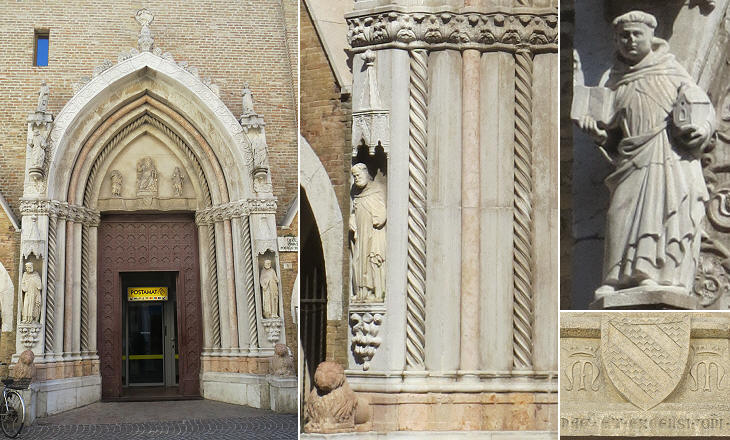 S. Domenico: Gothic portal and details of its decoration, including the coat of arms of the Malatesta

The portal of S. Domenico was built in 1395 and it has features which recall works by the Dalle Masegne, two Venetian sculptors. The portal was built by Malatesta IV Malatesta in honour of his father Pandolfo II.
In the XIXth century the Dominicans were ousted from the church and the adjoining convent and the two buildings were modified and turned into the Central Post Office. Only the portal was spared. 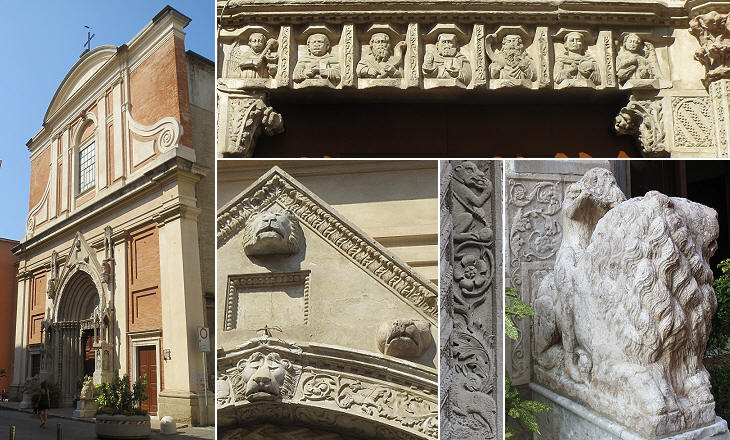 S. Agostino: (left) XVIIIth century façade which retains the Gothic portal; (centre/right) details of the portal; another detail can be seen in the image used as background for this page

The portal of S. Agostino was built in 1398-1413 and it has the richest decoration of the three. The heads of bears (It. orsi) next to heads of lions above the entrance could be a reference to Paola Orsini (who belonged to an important Roman family), mother of Malatesta IV Malatesta who built the portal.
The Malatesta were a family of condottieri and they spent most of their time fighting for who paid them best. Malatesta IV in particular did not lack job opportunities during the Great Schism as he fought for three antipopes. When he was not involved in battles he loved poetry and he is aka Malatesta dei Sonetti for the many sonnets he wrote in the style of Francesco Petrarca, who was a good friend of his father and whose sonnets were admired throughout Europe. 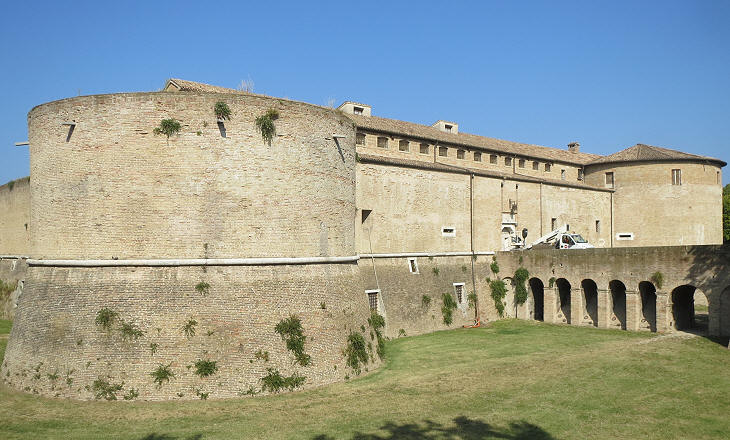 Galeazzo, the son of Malatesta IV, was the black sheep of the family, because he lacked the skill and courage a condottiere was expected to have. He ended up by recruiting mercenary troops to retain Pesaro, which his relative Sigismondo Pandolfo Malatesta of Rimini wanted to add to his possessions which included Fano, immediately south of Pesaro. Galeazzo even asked Federico da Montefeltro, the fiercest enemy of the Malatesta, for help. Eventually in 1445 he was unable to pay his soldiers and he sold Pesaro to Alessandro Sforza, brother of Francesco, one of the most celebrated condottieri who became Duke of Milan in 1450. In 1464 Alessandro acquired the fortress of Gradara midway between Pesaro and Rimini.
In 1474 Costanzo, Alessandro's son, started the construction of a fortress in the southern part of Pesaro, on the beach, probably fearing an Ottoman landing. As a matter of fact in 1480 Sultan Mehmet II made an attempt to conquer Italy and he seized Otranto in Apulia as a base for a major invasion, but he died in the following year and Otranto was retaken by the King of Naples a few months later.
The fortress was designed by Luciano Laurana, best known for the enlargement of Palazzo Ducale di Urbino. 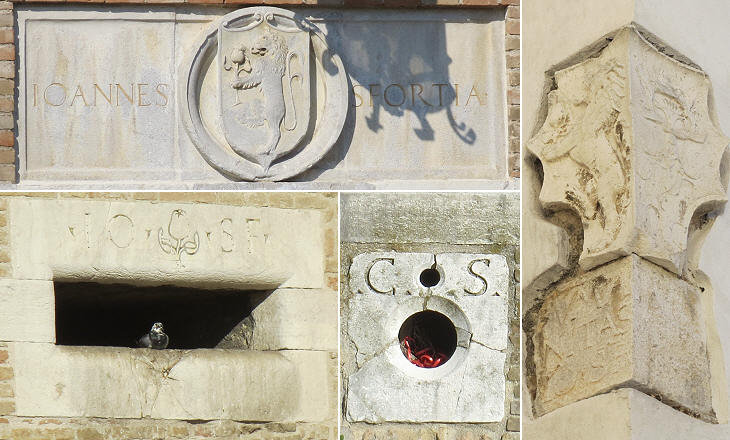 The fortress was completed by Giovanni, Costanzo's son, who is best known for having been the first husband of Lucrezia Borgia, daughter of Pope Alexander VI. The marriage was arranged in 1493 because the Pope relied on the help of the Sforza family in his fight against the French. Giovanni Sforza however was very cautious in defending the papal cause and after four years Alexander VI grew sick of his son-in-law. Giovanni was forced to declare he had not consummated the marriage, which was therefore declared null.
Move to page two.