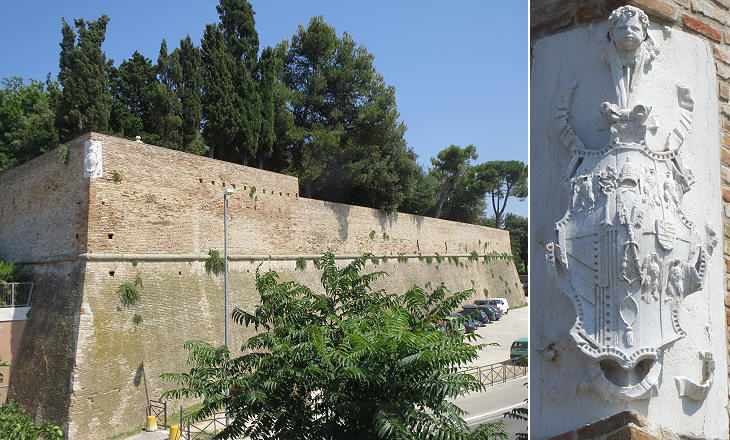 In 1497 Giovanni Sforza, ruler of Pesaro, was forced to declare he had not consummated his marriage to Lucrezia Borgia, daughter of Pope Alexander VI and a few years later he was ousted from his possessions by Cesare Borgia, his former brother-in-law. Giovanni Sforza returned to Pesaro after the death of the Pope in 1503, but in 1512 Pope Julius II assigned the town to Francesco Maria I della Rovere (his nephew) who incorporated it into the Duchy of Urbino, which he had inherited from the da Montefeltro.
The new walls built by Duke Francesco Maria I to protect Pesaro were pulled down on three sides in the early XXth century to allow the expansion of the town. A high bastion at their north-western corner was retained and turned into a public garden. In recent years an original coat of arms of the Duke and his wife was placed on it, in recognition of what the couple did for the development of Pesaro. 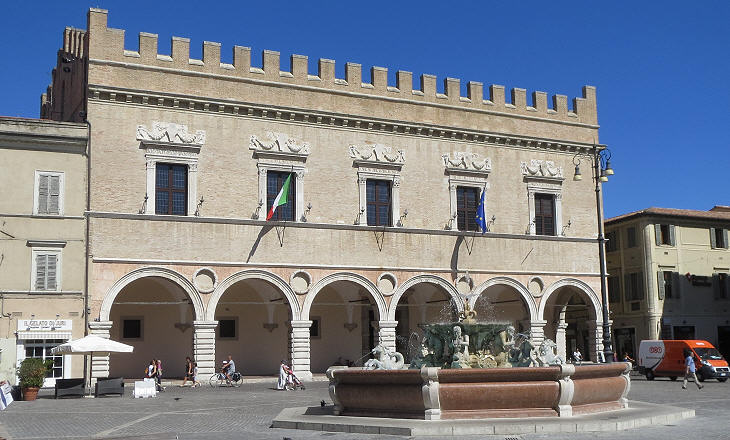 The della Rovere and in particular Duke Guidobaldo II, son of Francesco Maria I, loved to live in Pesaro rather than in their palace in cold and windy Urbino. They promoted the restoration and enlargement of a small palace built by the Malatesta and the Sforza which had been badly damaged by fire. The palace is located in a very large square in the centre of Pesaro. 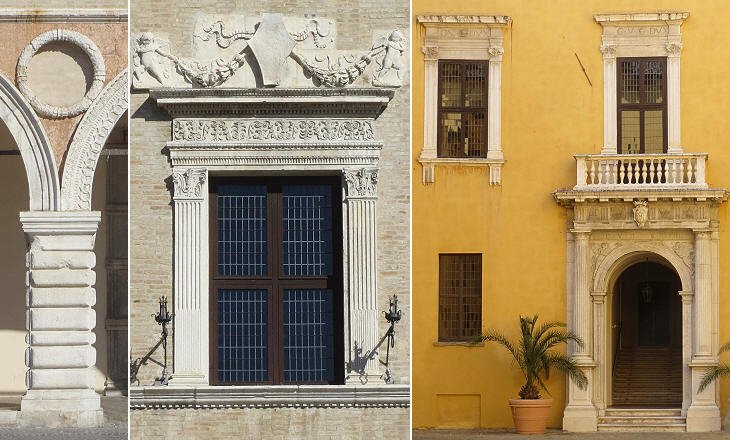 Palazzo Ducale: details including the portal in the courtyard built by Duke Guidobaldo II della Rovere

The windows are very similar to those of Palazzo Ducale di Urbino, whereas the portico (of the previous building) is similar to Tempio Malatestiano di Rimini. Quite unusually the number of windows does not match that of the portico arches. Today the palace is used as Prefettura, the residence and offices of the Prefetto, the highest representative of the Italian State at provincial level.
The image used as background for this page shows a detail of the window decoration. 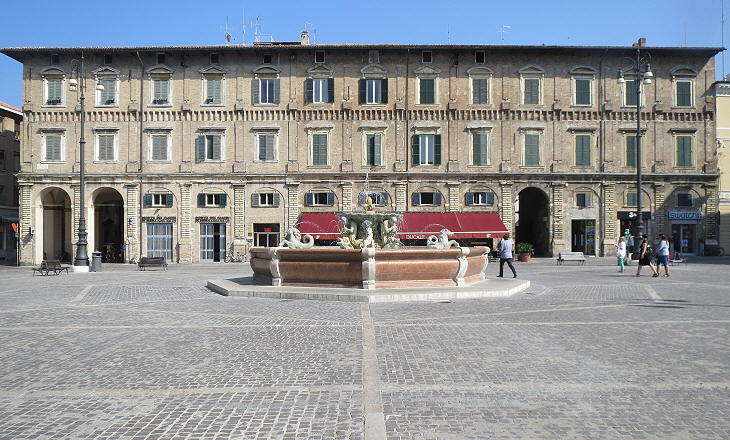 Palazzo Ducale was too small to accommodate the entire court of the della Rovere and therefore Palazzo della Paggeria (It. paggio means page in the sense of personal attendant of a person of rank) was built opposite Palazzo Ducale. The square would be a perfect example of Renaissance architecture if only its two minor sides were not occupied by out of context buildings. Guidobaldo lived in Urbino only in summer and over time his absence led to growing dissatisfaction among the inhabitants of the capital of the Duchy. He spent the rest of the year in Pesaro where he had two villas in the outskirts of the town. In the long run the Duchy was unable to support the cost of the court and the expenses Guidobaldo incurred in maintaining a lifestyle which he deemed necessary for a Renaissance prince.
In September 1572 Guidobaldo levied a tax on all sales of wine, corn and meat in order to reduce an ever increasing budget deficit. The inhabitants of Urbino reacted violently hoping in the intervention of Pope Gregory XIII, but eventually they had to surrender and ask for pardon. The leaders of the revolt were beheaded and their properties confiscated. In 1574 Guidobaldo died and he was buried in Pesaro and not in Urbino. 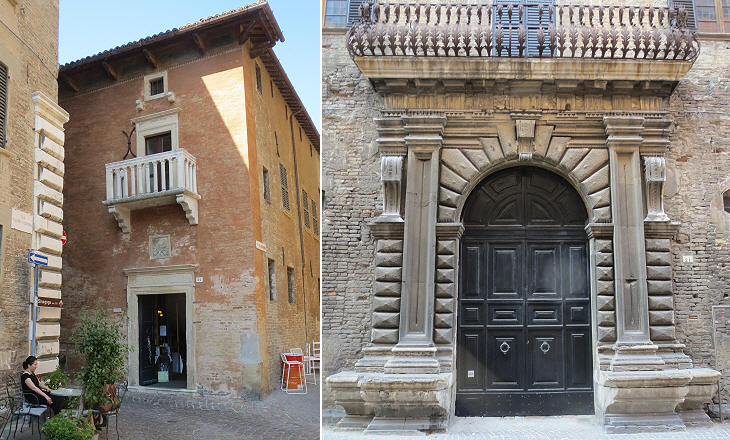 Apart from the della Rovere palaces and villas, Pesaro retains some interesting houses built by wealthy families. Casa Vaccai has a balcony in Venetian style, whereas the portal of Palazzo del Monte with its bugnato stones recalls Florentine patterns. 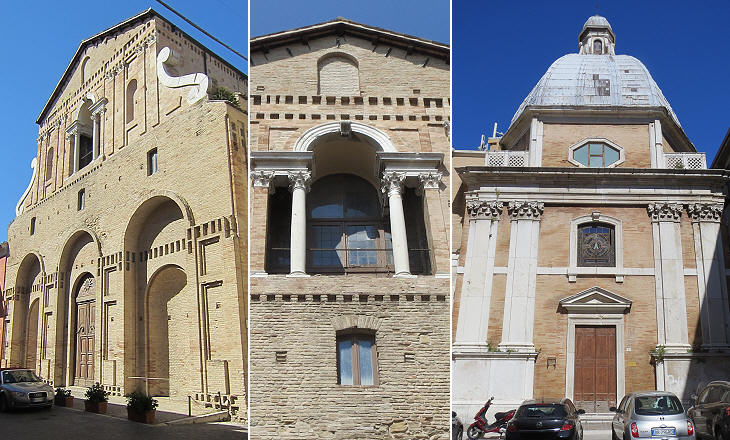 The construction of S. Giovanni Battista started in 1543. Duke Guidobaldo II wanted the new church to become the funerary chapel of the della Rovere, similar to Tempio Malatestiano at Rimini and the design of the façade recalls that of the latter. Bartolomeo Genga, the architect of the della Rovere, included in it a window which is typical of Italian Renaissance and which is called Serliana after it was described in a treatise by Sebastiano Serlio. Eventually S. Giovanni Battista never became the funerary chapel of the della Rovere.
St. Ubald is the patron saint of Gubbio, one of the most important towns of the Duchy, and Francesco Maria II, son of Guidobaldo, dedicated a church to this saint as an ex-voto for the birth of Federico Ubaldo, his first child on May 16, 1605, the feast of St. Ubald. The building houses the tombs of Guidobaldo II and Vittoria Farnese, his second wife. 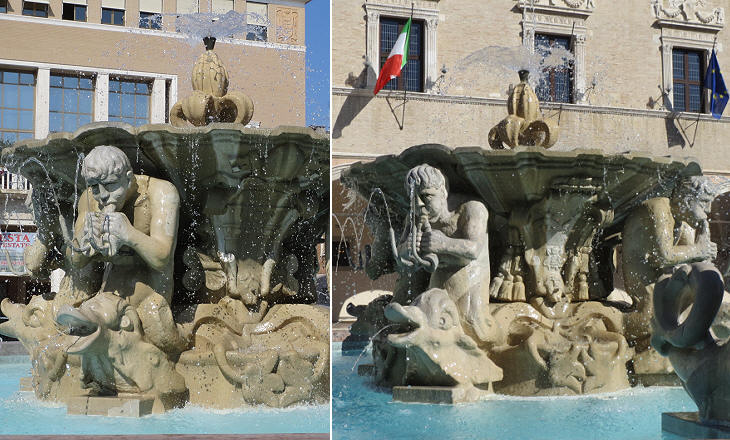 Duke Federico Ubaldo died in 1623 and his father in 1631 without leaving male heirs. The Duchy of Urbino passed to the direct administration of the Papal State. Without the della Rovere court the economy of Pesaro declined.
Cardinal Carlo Barberini, grand-nephew of Pope Urban VIII, was appointed legate (governor) of Pesaro and Urbino in 1677. Following the steps of his ancestor who built Fontana del Tritone and other fountains, decided to fill the empty square between Palazzo Ducale and Palazzo della Piaggeria with a fountain he commissioned to Lorenzo Ottoni, a Roman sculptor. The fountain was decorated with tritons, dolphins and sea horses, following a pattern very popular in Rome. The size of the fountain however is too small for the square; perhaps Cardinal Barberini had to take into consideration that Pope Innocent XI would not have approved of a larger fountain, as he was against pouring money into embellishing Rome and the other towns of the Papal State.
The fountain was reassembled in 1960 after it had been blown up by the Germans in 1944. 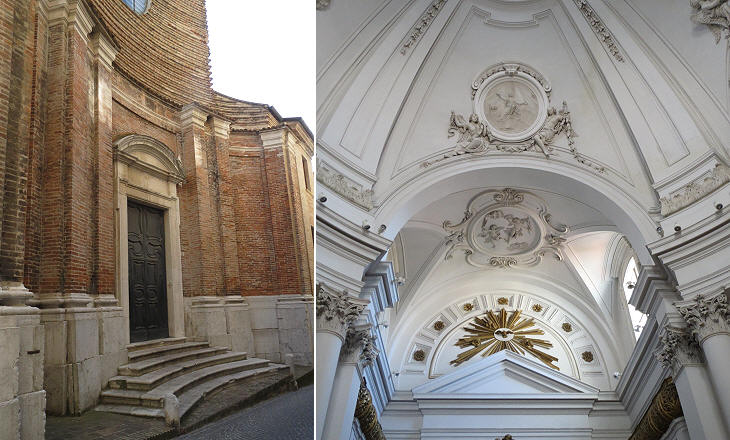 During the XVIIIth century Rome did not offer many opportunities even for talented architects. Luigi Vanvitelli accepted many commissions in provincial towns before being called by King Charles VII of Naples to design the Royal Palace of Caserta in 1751. The concave façade of Chiesa della Maddalena is typical of many Roman churches, but Vanvitelli opted for giving it a rather austere look as he did in Convento di S. Agostino in Rome. The interior instead has a very rich stucco decoration. 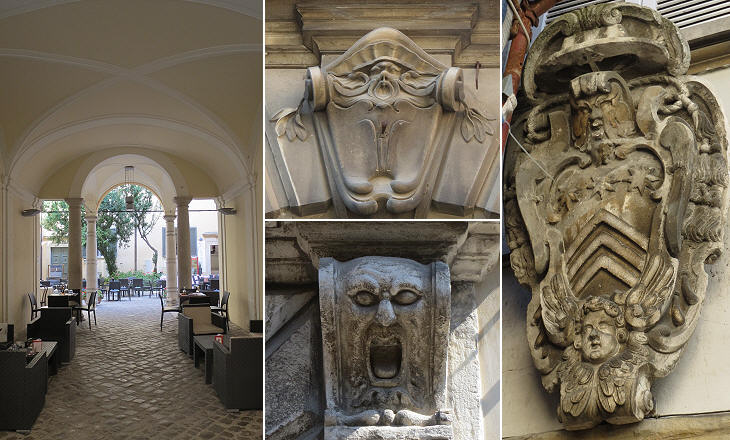 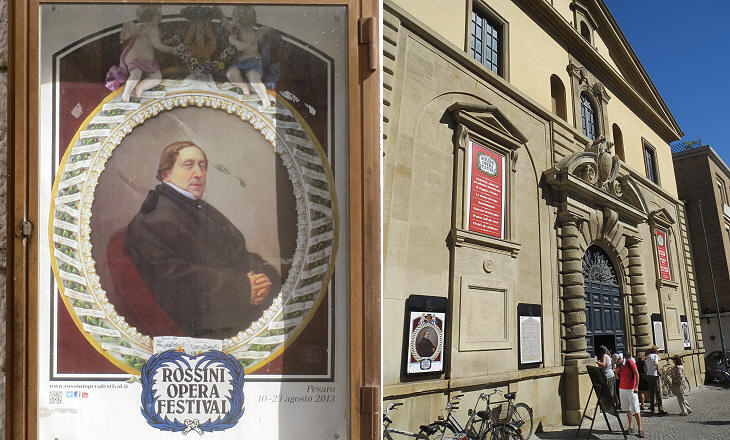 A page covering Pesaro cannot avoid mentioning Gioacchino Rossini, who was born in 1792 in a house near the Cathedral. Although the author of Il Barbiere di Siviglia and other popular operas spent only a few years in his hometown he bequeathed almost all his fortune to the City of Pesaro for the foundation of a conservatory.
Since 1980 an opera festival devoted to his works is held in Pesaro in the month of August. It has acquired a worldwide reputation for reviving some of the lesser-known operas by Rossini.
Return to page one.