- Fishbourne Palace
(Didcot Hoard at the Ashmolean Museum of Oxford)

You may wish to see an introductory page to this section or a page on nearby Noviomagus Reginorum (Chichester) first. 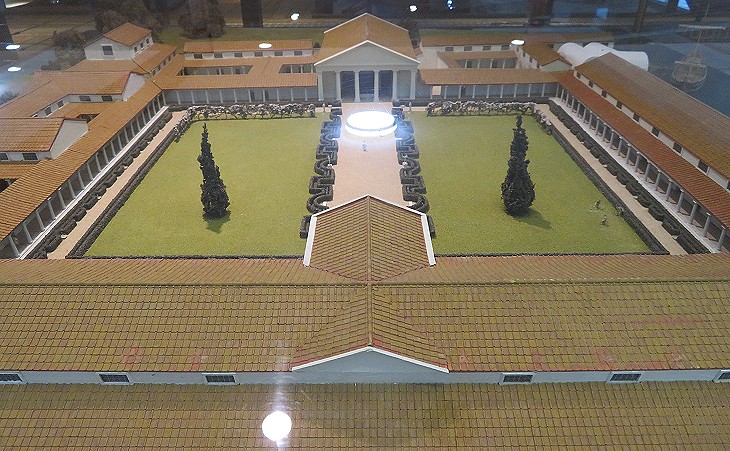 In 1960 chance excavations at Fishbourne, a village two miles west of Chichester, identified some Roman walls and floor mosaics. Archaeological campaigns by Prof. Barry Cunliffe in 1961-1968 led to the identification of the North Wing of a large palace which was designed around a central garden. Parts of the West Wing were also found, whereas the rest of the building most likely lies under the houses of the village. 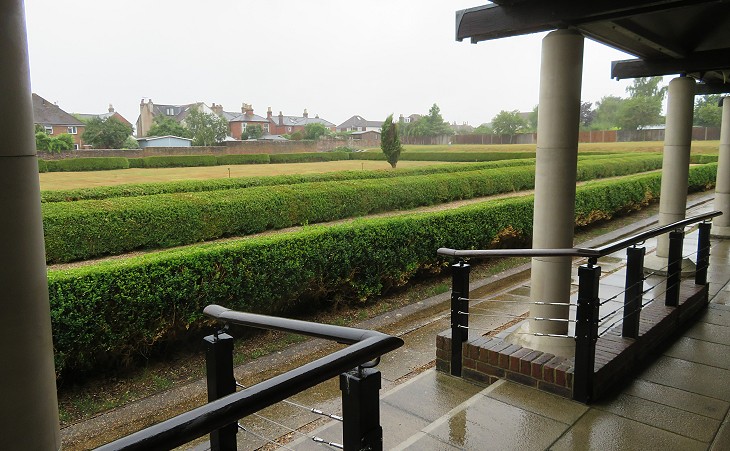 View of the garden from the North Wing

The palace is dated ca 80 AD and it replaced a smaller one which in turn was built on granaries, warehouses and other facilities which were used by the Roman legions as a logistics base for their expeditions westwards, perhaps by Vespasian in 43 AD when he was commander of Legio II Augusta. Its overall design is similar to Domus Flavia, the palace built by Emperor Domitian on the Palatine Hill. Overall view of the North Wing of Fishbourne Palace

A modern structure shelters the floor mosaics of the North Wing and some from the West Wing. They are the main (almost the only) evidence of the palace and they can be looked at under natural light and at close range (see some similar structures at Ahrweiler in Germany and at La Olmeda in Spain and the less effective arrangement at the Roman Villa of Lullingstone). 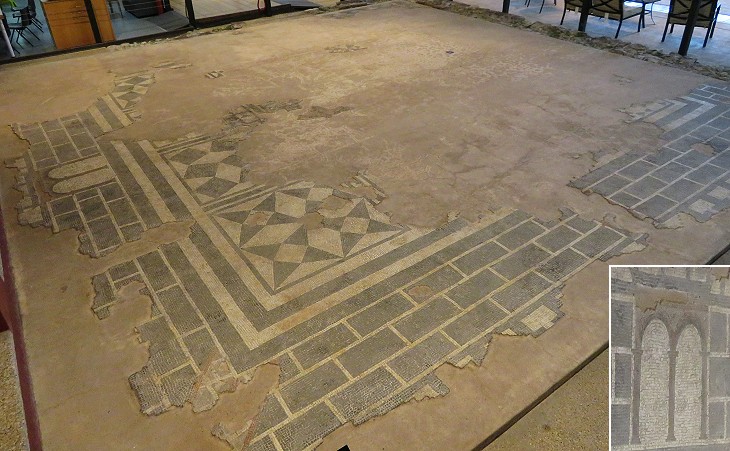 Mosaic of the Walled Town (end of the Ist century), thus named because the walls and gates of a town are depicted in its external part (see another mosaic at Italica with the same decorative motif); (inset) a gate

The palace might have been the residence of Cogidubnus, a king of a Roman client state in today's West Sussex and Hampshire. Its first floor mosaics reflected the fashion which prevailed in the City of Rome where black and white mosaics were preferred to coloured ones, e.g. at Villa di Livia. Later on tastes changed and the Mosaic of the Walled Town was replaced by a partly coloured one, i.e. the Mosaic of Cupid on the Dolphin below in this page. 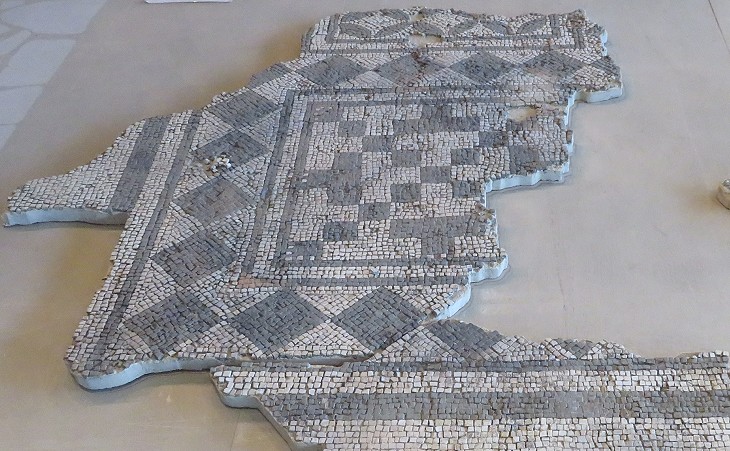 Black and white mosaics were enlivened by the depiction of a great variety of geometric patterns which very often created an optical effect as shown in another black and white mosaic of the same period in the introductory page. Those at Fishbourne Palace were rather simple; you may wish to see a more elaborate design at Villa dei Volusii near Rome. 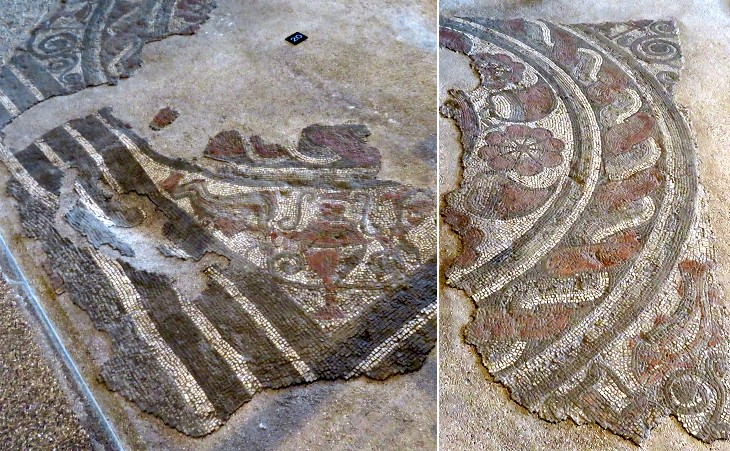 Details of a partly coloured mosaic with dolphins and "kantharos", a cup used for drinking wine

Later mosaics show the initial use of coloured pieces with a prevalence of red and grey ones and the introduction of small figures/objects (jars, dolphins, flowers, etc). Art historians, given the great similarities among Roman floor mosaics in very distant locations, have come to the conclusion that drawings of typical decorative motifs/subjects were circulated among the officinae (workshops) of mosaic-makers which were active in the provinces of the Roman Empire. 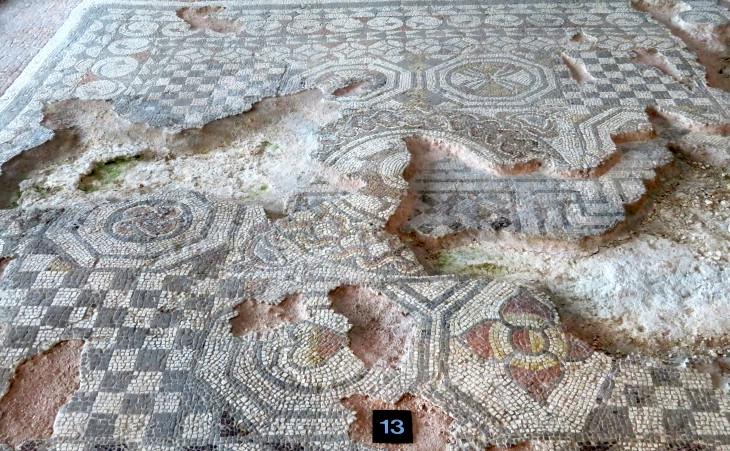 This mosaic shows another step in the history of the floor mosaics of Fishbourne Palace; it replaced a simple black and white mosaic with a more complex decoration based on octagons housing Solomon's knots, flowers, leaves. At the centre a Head of Medusa was portrayed inside a circle. This was the emblema, a medallion with figures which often decorated large floor mosaics. A better example of emblema depicting Medusa can be seen at the Roman Villa of Bignor, not to mention an impressive one at the Archaeological Museum of Sousse. This approach eventually led to multiplying the emblema by depicting the Four Seasons or the Nine Muses inside medallions. 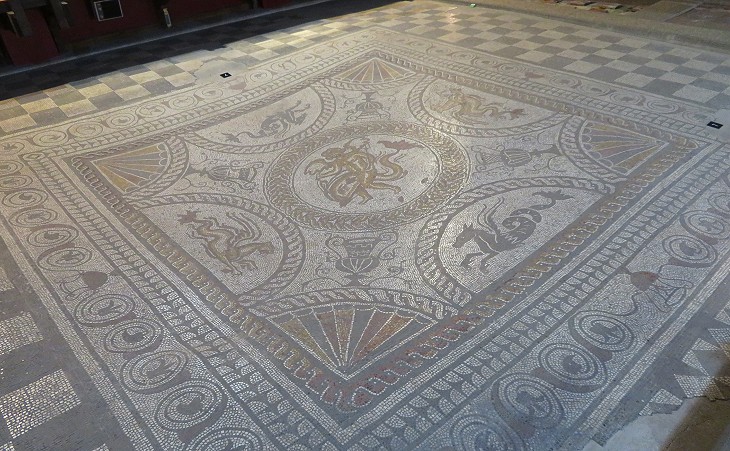 We do not know who lived at Fishbourne Palace in the IInd and IIIrd centuries, but it is likely he had a penchant for the traditional black and white mosaics because even the new ones which were in line with the latest trends retained a black and white structure. Sea monsters were a very popular subject for floor mosaics and they offered the opportunity for some very spectacular compositions, e.g. at Terme di Nettuno at Ostia, but the landlord who commissioned this mosaic preferred to see them inside frames and an overall geometric decoration. 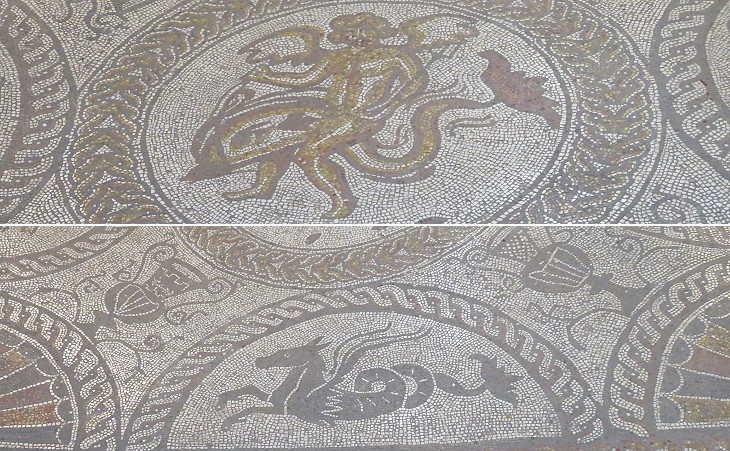 Details of the Mosaic of Cupid on the Dolphin

Cupids were another popular subject in Roman Britain and they were portrayed in two other very interesting floor mosaics at Bignor and at Camulodunum. The latter one has also sea monsters. A floor mosaic with the same structure and sea monsters was found at Corinium (Cirencester). For a very fine depiction of Cupids riding a dolphin you may wish to see a mosaic at Bulla Regia. Mosaic of the Shell with perhaps a peacock in the middle (IIIrd century) (see another restored mosaic depicting a shell at the Verulamium Museum at St. Albans)

The floor mosaics of Fishbourne Palace are not dated beyond the IIIrd century. There is evidence that the structure was destroyed by fire in the second half of that century, a turbulent period in the history of the Roman Empire. In 259-74 and in 286-296 Britain was ruled by generals who established separate empires which included also Gaul. It is possible that the landlord of Fishbourne Palace stood on the wrong side of the conflict between those who were loyal to the official emperor and those who supported the split with Rome. 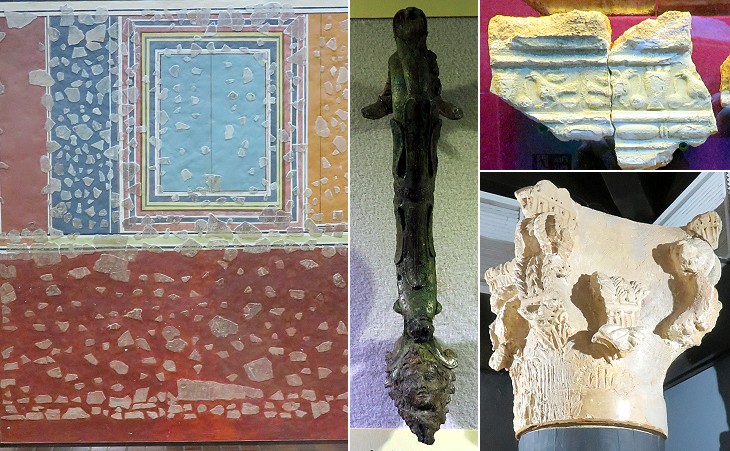 Museum at Fishbourne Palace: exhibits showing some fragments of paintings, architectural elements and bronze decorations which were found in the site

The image used as background for this page shows a detail of a mosaic depicting a Solomon's knot.