- Side: 3. The Theatre Quarter
(theatrical masks at Myra)

You may wish to see an introduction to this section or page one (The Walls of Side) first.

It would have been gratifying to have prolonged our stay at Side; the profusion of interesting objects which arrested the eye at every step, could only be considered as an index to the richer harvest that was likely to reward a more diligent search both above and under ground: but the great length of coast yet to be explored would admit of no unnecessary delay.
Francis Beaufort, Captain of HMS Frederikssteen, a frigate of 32 guns: Karamania; or a brief description of the South Coast of Asia Minor, and of the Remains of Antiquity collected during a survey of that coast, under the orders of the Lords Commissioners of the Admiralty, in the years 1811 & 1812 - Published in 1817
April 10th. I this morning paid a visit of some hours to the ruins of Side, which were about a mile from the spot where my tent was pitched last night; they are far inferior in scale, date, and age to any I have before seen.
Charles Fellows - Journal Written during an Excursion in Asia Minor in 1838.
Fellows visited Side a few days after having seen Sagalassos, Perge and Aspendos. (From the land gate) a paved street, with high kerbstones, leads to a square, of about 180 feet in diameter. The bases remain of a double row of columns, by which this square, or Agora, was surrounded; and in the centre there is a large ruined pedestal as if for a colossal statue. Beaufort
Similar to the agora of Perge, that of Side consisted of a large square surrounded by porticoes with a round temple at its centre. The latter is in the process of being reconstructed (you may wish to see the Commercial Agora in 2008 - it opens in another window). Another agora (State Agora) was situated at the south-eastern end of the Harbour Quarter. 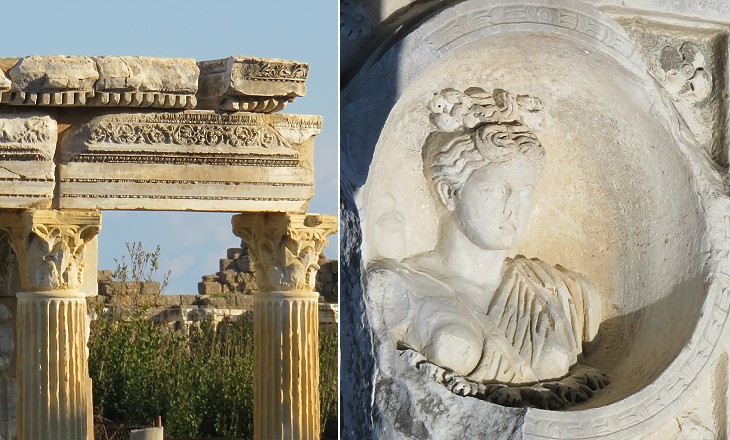 Commercial Agora: (left) a detail of the temple at its centre; (right) fragment of a ceiling coffer with a relief portraying Artemis/Diana

We were attracted towards (a site) at no great distance from the front of the theatre, by some large slabs of marble which lay on the ground. They seemed to have been the ceiling of a small circular edifice, in some manner dedicated to astronomy; for the under surface of the outer ring of stones is cut into deep soffits, each of which contains a star; and on the sector-shaped stones there is a zone of sculptured compartments, comprising a series of figures. Beaufort
The circular building has been identified as a Temple to Tyche, a goddess who was regarded as a guardian of towns because she wore a crown resembling the walls of a town. She continued to be portrayed, if not worshipped, in Christian times (see a mosaic at Scythopolis, today's Bet She'an in Israel). (The Agora communicated) with the front of a magnificent theatre: and as it is by far the largest and the best preserved of any that came under our observation in Asia Minor, a short account of its form and dimensions may be acceptable to the reader, who will, it is hoped, excuse any want of perspicuity in details which are so foreign to the general pursuits of a seaman. Beaufort
The theatre has been fine, but is now in ruin, except the seats, which are in tolerable preservation. The whole of the area and lower parts being filled with a wood of trees, it is difficult to judge of the size, but I should think it smaller than three or four which I have seen within the last few weeks. Fellows 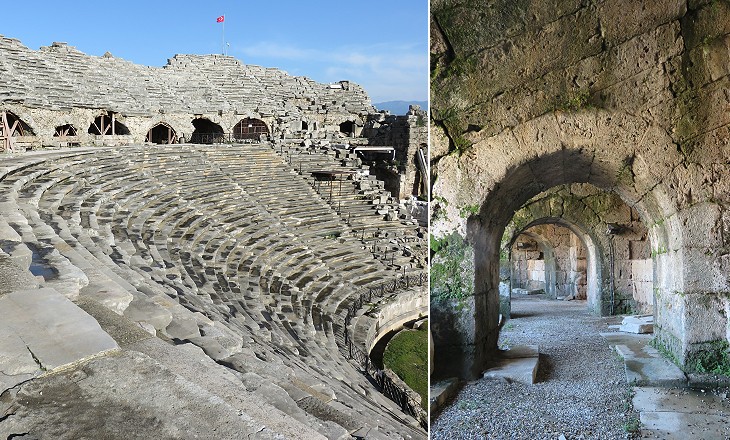 Now supposing that the ancients sat as we do, with the legs pendent, and not crossed under them like the modern Greeks and Turks, and therefore taking eighteen inches as sufficient for each person to occupy (a seat), this theatre would contain 13,370 persons, when regularly seated; but, in crowded exhibitions, many could sit on the flights of small steps, or could stand on the upper platform; these may be estimated at 1,870 more, and would altogether, make the enormous aggregate of 15,240 spectators. Beaufort
The calculations made by Beaufort have been endorsed by archaeologists. The cavea was divided into two sectors and it was supported by a system of arches which strengthened its resistance to earthquakes. 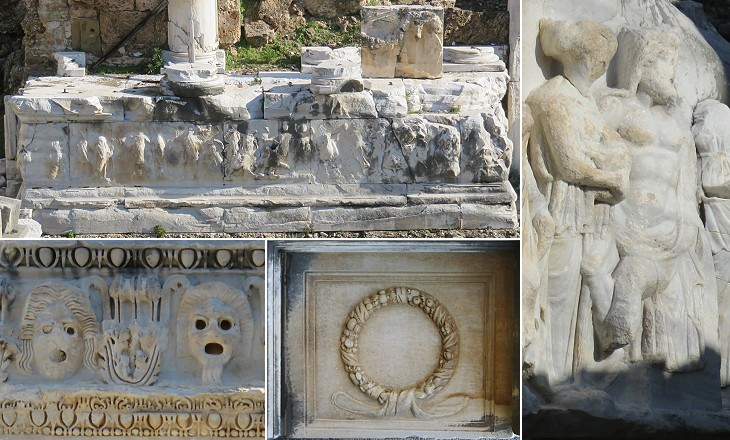 Theatre: reliefs decorating the stage. The image used as background for this page shows a relief depicting a Winged Victory

This edifice, as far as it has been described, is in a very perfect state; few of the seats have been disturbed, and even the stairs are, in general, passable; but the Proscenium has suffered considerably, the columns have been broken down, the decorations destroyed, and a part only of the walls is left standing. Beaufort
Scaenae frons, the building behind the stage, was a narrow and long construction and its stability was lesser than that of the cavea. Its collapse entailed that of its decorated portico. The damage to statues and reliefs was partly caused by the rage of the Early Christians towards symbols of the past religion, such as the Dionysiac scene depicted in a long relief on the stage podium. The main theatre of Athens as well as that of Aspendos were dedicated to Dionysus, the god of Drama and a small temple to him has been found near the entrance to the theatre of Side. 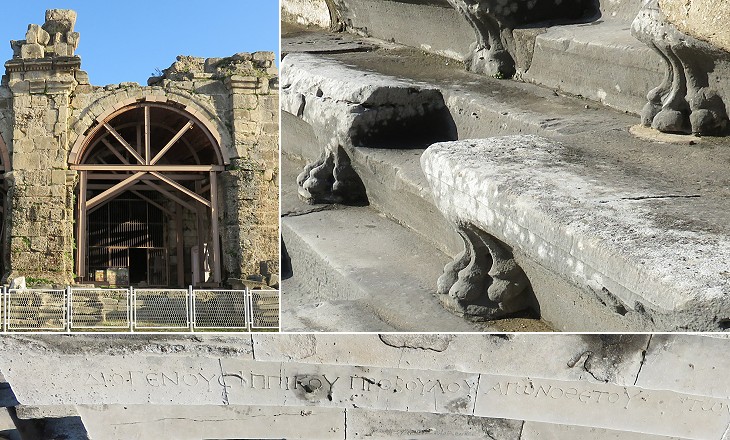 Theatre: (above-left) exterior; (above-right) decoration of the stone benches with lion paws (similar to that at the theatre of the Asklepion of Pergamum); (below) inscriptions on the benches (similar to those at the Southern Theatre of Jerash, in today's Jordan)

The glowing colours in which this town is described in the "Modern Traveller*", as quoted from Captain Beaufort's admirable survey, show how essential it is to know upon what standard a description is formed. It would have given Captain Beaufort much pleasure to have gone inland for a few miles, and to have seen theatres and towns in perfect preservation as compared with Side, and of so much finer architecture. From the account which he gives I was led to expect that this would form the climax of the many cities of Asia Minor I saw, but I found its remains among the least interesting. Fellows
Fellows tended to despise all which could not be associated with classic Greek architecture and sculpture, however many of the monuments of Aspendos, Perge and Sagalassos which he entusiastically described in his book were built in Roman time.
*The Modern Traveller; or a Popular Description, Geographical, Historical, and Topographical, of the various Countries of the Globe. Published in Monthly Parts at 2s. 6d. (in the 1830s) 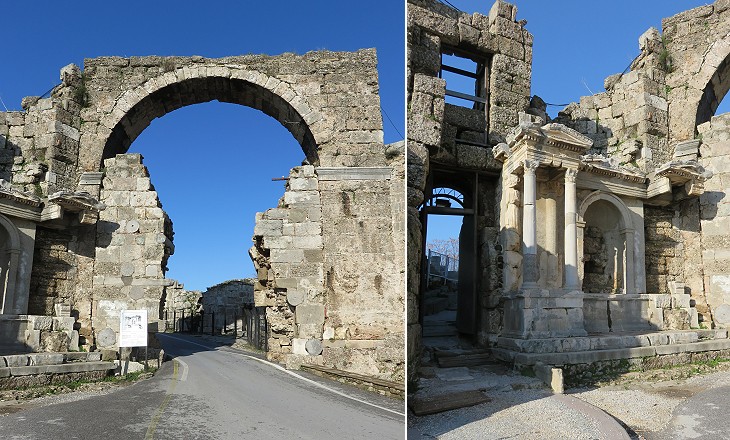 Standing on the highest part of the peninsula, from whence the ground falls towards the isthmus, its commanding situation would seem better calculated for security from assault, than that on which the more extensive ramparts of the city were originally placed. Accordingly, in latter times, when theatrical exhibitions were probably disused and security became the chief object, the theatre appears to have been converted into a great bulwark; the proscenium was closed up and walls with towers and gates, but low and of inferior work, were continued from the wings on each side, to the sea-shore. Beaufort
A triumphal arch erected at the side of the theatre and across the street leading from the land gate to the harbour was walled up in Byzantine times. Archaeologists have unearthed a small monument/fountain to Emperor Vespasian which had been incorporated into the new fortifications to the left of the arch. 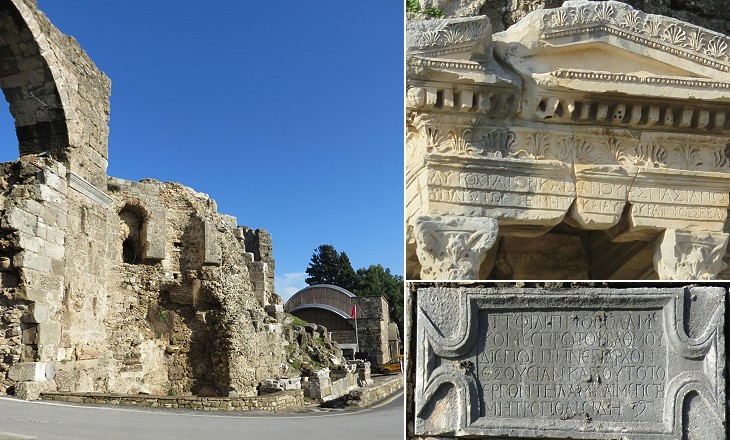 (left) Nymphaeum on the other side of the Great Arch and behind it the baths which house the Archaeological Museum of Side; (right-above) entablature of the Monument to Vespasian with dedication to the Emperor; (right-below) inscription in a typically Roman frame on the outer side of the Nymphaeum

The street was flanked by the aqueduct which supplied water to large baths and to a nymphaeum with three niches. By and large inscriptions at Side were written in Greek. One of them indicated that the theatre had been turned into an open air Christian church. 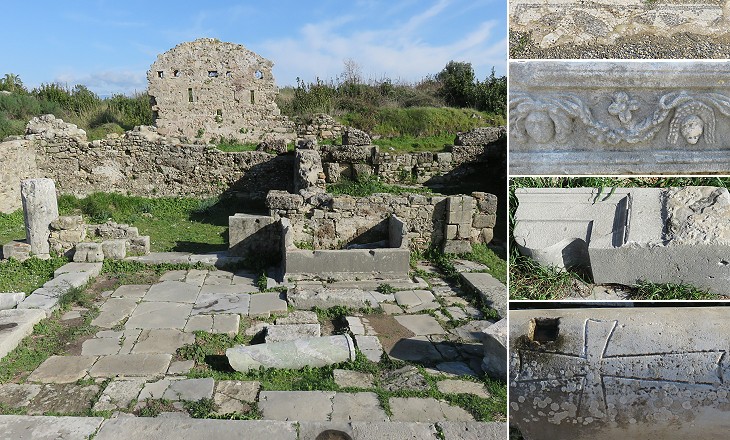 (left) House with a small peristyle and a fountain; (right - from the top) fragment of mosaic, decorative relief, console and cross near the house

Archaeologists have uncovered a group of two storey houses near the Commercial Agora. They were relatively small in size, but they had access to the aqueduct and were decorated with floor mosaics and some reliefs.
At Side, as well as in many other ancient towns, there is an imbalance between the size of the monuments and that of the quarters for ordinary people which have been unearthed by excavations. It could be that the poorer classes lived in mud and/or timber houses outside the walls which have entirely disappeared. 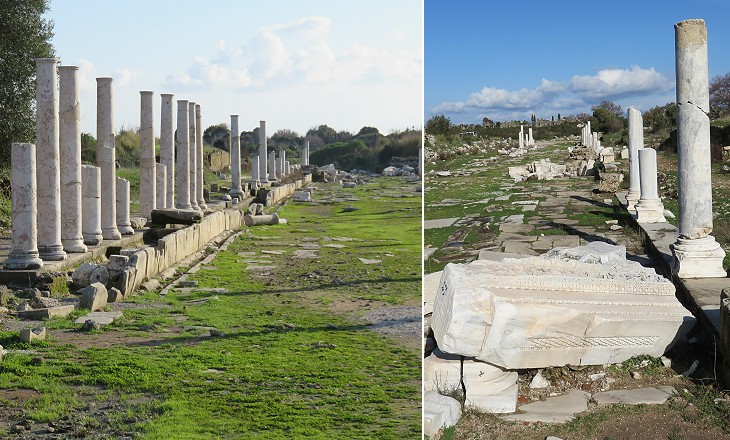 Colonnaded Street leading to the eastern part of the town

The main colonnaded street crossed the whole town from the land gate to the harbour. Part of it is now under the houses built after 1895 when Side was repopulated with Muslim refugees from Crete and part is covered by a modern road. It was not the only colonnaded street of the town and archaeologists have in part reconstructed that which linked this street with the Eastern Gate. 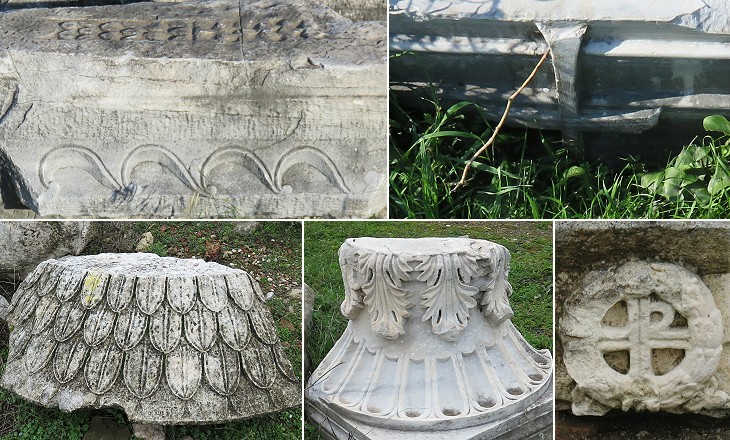 Crosses and decorative motifs along or near the Colonnaded Street

Move to 1. The Walls or to 2. The Harbour Quarter or to 4. The Archaeological Museum.