Afterwards I walked with the dragoman (interpreter) and a janizary (guard) to the Aga's (Governor's) house whence I had a good view of the mosque of Omer said to be built on the site of Solomon's Temple on Mount Moriah in the south east corner of the city.
William Turner - Journal of a Tour in the Levant - 1820
The mighty Mosque of Omar, and the paved court around it, occupy a fourth part of Jerusalem. They are upon Mount Moriah, where King Solomon's Temple stood. This Mosque is the holiest place the Mohammedan knows, outside of Mecca.
Mark Twain - The Pilgrims Abroad - 1869 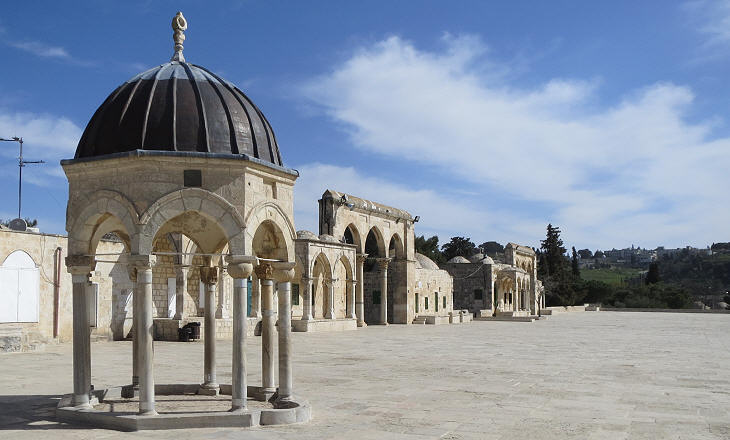 The large terrace where the Temple stood became a Muslim holy site in the VIIth century when Caliph Omar, after having conquered Jerusalem, built two mosques there: one was a shrine surrounding a rock from which the Prophet ascended to Heaven, the other was a mosque on the site where the Prophet prayed after a nocturnal journey. Both buildings were wooden. Today the whole terrace and its monuments are managed by a Muslim institution. It is the only large space in the Old City where children and old people can gather. 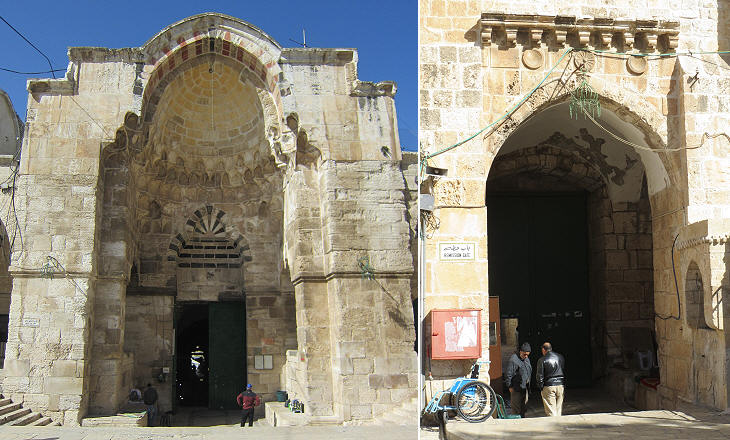 Haram esh-Sheriff is separated from the rest of the city by high walls where the Mamelukes, who ruled Jerusalem from 1249 to 1516, opened imposing gates. Muslims can access Haram esh-Sheriff through any of these gates, but non-Muslims can do that only through a special passage subject to tight security controls. Orthodox Jews do not visit Haram esh-Sheriff and pray at the Wailing Wall outside it. 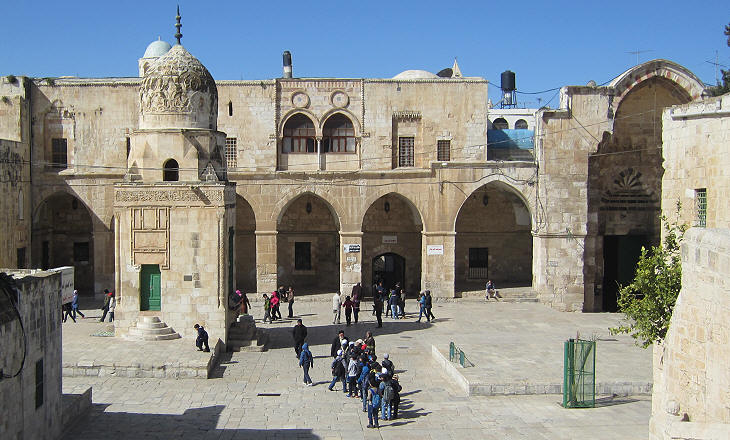 The western and northern sides of the terrace are surrounded by buildings, mainly Koranic schools and other religious bodies of the Mameluke period. On the eastern and southern side the walls of Haram esh-Sheriff coincide with those of the town. In 1487 Sultan Qait Bey built al-Ashrafiya Medrese and a sebil, a kiosk where passers-by could drink a glass of water. The small building is topped by a tall dome which is typical of Mameluke architecture in Egypt (you may wish to see a detail of an 1840 view of Cairo by David Roberts - it opens in a separate page - or a fortress Qait Bey built at Alexandria). 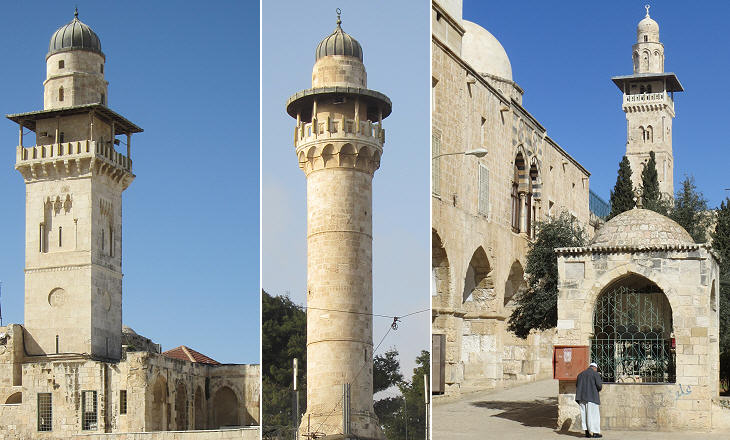 Minarets were built by the Mamelukes near the main entrances to Haram esh-Sheriff. They resemble those at Damascus (of which the finest one was built by Qait Bey), although their decoration is rather plain. Until the late XVIIIth century they were the main features of the skyline of Jerusalem, as Christians were not allowed to build tall bell towers. The small lead domes are Ottoman additions. 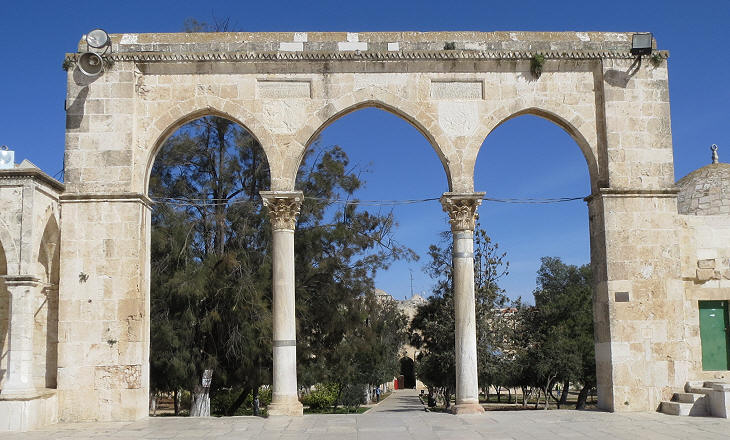 I saw three separate rows of arches supported by columns each row having three arches of which the middle one is supported by two columns. W. Turner
The centre of Haram esh-Sheriff houses a raised platform which is accessed via a series of arches built with ancient columns and capitals. These were not part of the Temple, but of the buildings of Aelia Capitolina, the town founded by Emperor Hadrian.
According to a Muslim tradition, on the Day of Judgement sins and deeds of human beings will be weighed on balances hanging from these arches. 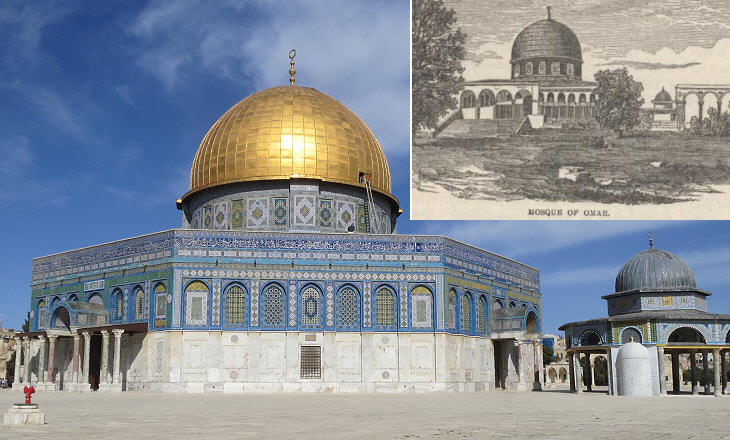 Qubbet es-Sakhra (Dome of the Rock - left) and Qubbet el-Silsileh (Dome of the Chain - right); (inset) illustration from "The Pilgrims Abroad"; at that time the dome was covered with lead

It stands in a large grassy square sparingly planted with large spreading trees. The mosque itself is very handsome and the largest I have seen out of Constantinople. Its dome was built by Sultan Solyman the first. It is by far the prettiest and most elegantly adorned building in Jerusalem or perhaps of Turkey. W. Turner
The remark by Turner on the size of the Dome of the Rock requires an explanation, because the building is by no means a large one. In his tour of the Levant Turner reached the Holy Land without visiting Damascus or Aleppo or other locations with large mosques and he had not seen Cairo yet.
I need not speak of the wonderful beauty and the exquisite grace and symmetry that have made this Mosque so celebrated - because I did not see them. One can not see such things at an instant glance - one frequently only finds out how really beautiful a really beautiful woman is after considerable acquaintance with her; and the rule applies to Niagara Falls, to majestic mountains and to mosques - especially to mosques. The great feature of the Mosque of Omar is the prodigious rock in the centre of its rotunda. It was upon this rock that Abraham came so near offering up his son Isaac - this, at least, is authentic - it is very much more to be relied on than most of the traditions, at any rate. On this rock, also, the angel stood and threatened Jerusalem, and David persuaded him to spare the city. Mahomet was well acquainted with this stone. From it he ascended to heaven. The stone tried to follow him, and if the angel Gabriel had not happened by the merest good luck to be there to seize it, it would have done it. Very few people have a grip like Gabriel. M. Twain
Because of earthquakes, wars, pillages and modern refurbishments the building retains only the octagonal shape of the original one dated late VIIth century. The current aspect of its exterior (only Muslims are admitted inside) is by and large a result of the Ottoman restoration ordered by Sultan Suleyman I. In Turkey all buildings erected during the reign of Sultan Suleyman are attributed to Mimar Sinan, the great Ottoman architect. Suleyman Turbesi, the tomb of the sultan designed by Sinan has features similar to the Dome of the Rock. 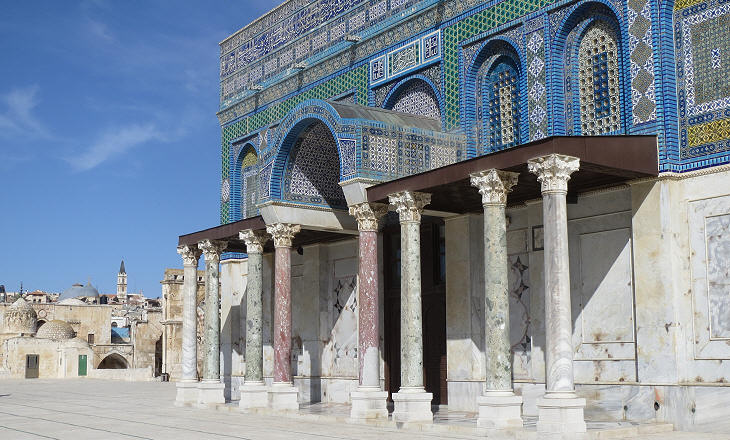 Qubbet es-Sakhra: one of the entrances

No Christian is allowed to visit its interior. It is said that an English traveller of distinction many years ago entered with his servants by means of an express firman (authorization), but the Turks, saying that the firman said nothing of his coming out, again offered him the usual alternative of death or Islamism and he chose the former. The mosques are painted of different colours, but the prevailing one is a Dutch tile blue. W. Turner
Up to within a year or two past, no Christian could gain admission to it or its court for love or money. But the prohibition has been removed, and we entered freely for bucksheesh. M. Twain
In the 1960s the original Ottoman tiles were widely replaced by copies made in Italy. The portals have been redesigned; in the XIXth century they had a distinct Ottoman appearance with a large roof projecting from the walls, as it can be seen in some late Ottoman buildings in Constantinople such as Tophane Cesmesi. 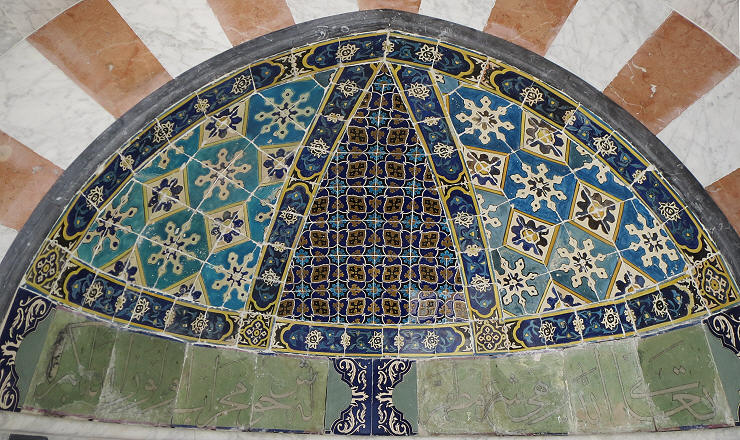 Qubbet el-Silsileh: Ottoman tiles, another tile can be seen in the image used as background for this page (you may wish to see those which decorate Rustem Pacha Camii at Constantinople)

Round the two mosques are several fountains and small buildings with little domes. In one of these to the right of the mosque the dragoman shewed me a window at which he assured me very gravely Solomon used to sit. W. Turner
Just outside the mosque is a miniature temple, which marks the spot where David and Goliah used to sit and judge the people (a pilgrim informs me that it was not David and Goliah, but David and Saul. I stick to my own statement - the guide told me, and he ought to know). M. Twain Qubbet e-Silsileh (Dome of the Chain) is a small building which puzzles art historians and archaeologists for its location and design. It is thought it was built before Qubbet es-Sakhra to mark the exact centre of the terrace. It is associated with the site where David hung a chain that could not be grasped or touched by anyone deceitful, unjust or wicked. It is also said that this is the place where Solomon administered justice.
The building has a hexagonal drum, but its portico, which rests on ancient columns and capitals, has eleven sides, a most unusual number in architecture. 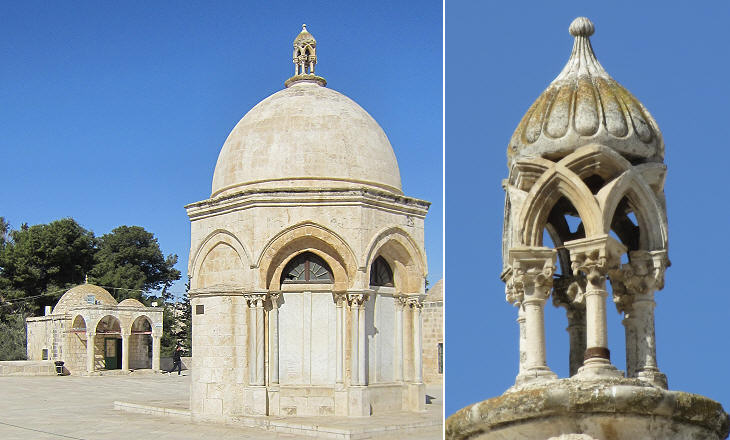 (left) Qubbet el-Miraj (Dome of the Ascension); (right) detail of its dome which shows a Gothic design

This small building stands on the site where the Prophet prayed before his Ascension to Heaven. It is not very clear whether it existed when the Crusaders conquered Jerusalem in 1099 and turned it (perhaps) into a baptistery or it was built by them. Other similar small buildings were built at a later period: Qubbet al-Arwah (Dome of the Souls - 1628 - first image of the page) marks the place where the souls of the believers would be summoned to after their resurrection. 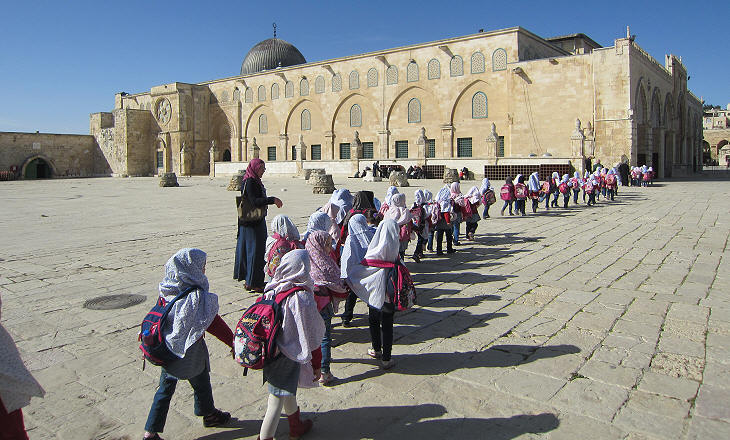 El-Aqsa Mosque (the Furthest One - from Mecca)

Near it is another mosque of which the dome and indeed the whole building is much smaller. W. Turner. The remark by Turner is puzzling, because while the dome of el-Aqsa might be smaller than that of the Dome of the Rock, the whole building is larger.
The mosque was built in the late VIIth century, but it was largely modified in the following centuries. During the Crusader period it was used as a royal palace. Major changes were made in 1938. It is the mosque where all adult male Muslims of Jerusalem are expected to gather for the main Friday prayer. 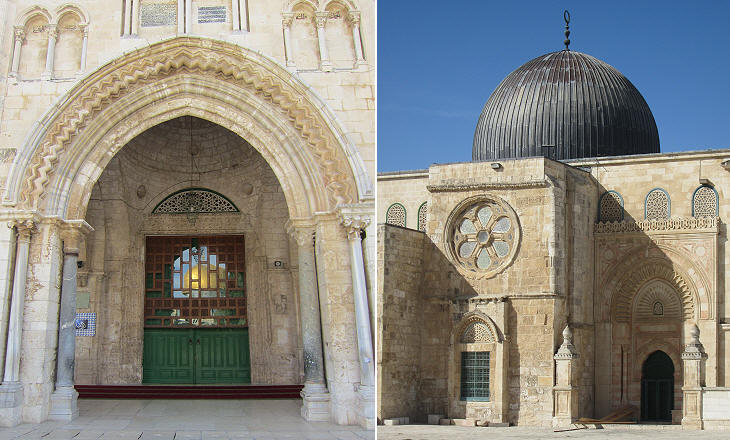