The first section of ancient Via Aurelia was built in the IIIrd century BC to ensure good communication with Cosa (today Ansedonia, a few miles north of Montalto di Castro), a town founded by the Romans to control Etruscan territories they had just conquered. It was named after a member of gens (family) Aurelia who promoted the initiative. It had two starting points in Rome: Porta Aurelia (Porta S. Pancrazio) and the site where later on Mausoleo di Adriano was built. 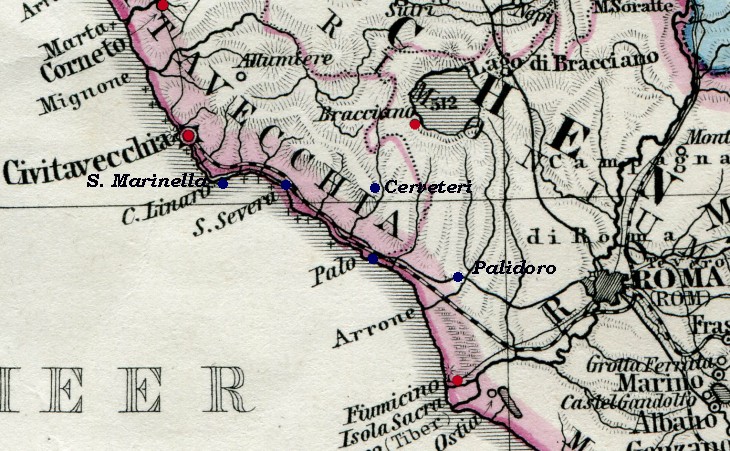 1866 German map showing the locations covered in this section (blue dots); the locations with a red dot, i.e. Corneto/Tarquinia, Civitavecchia, Bracciano and Fiumicino/Porto are covered in other sections 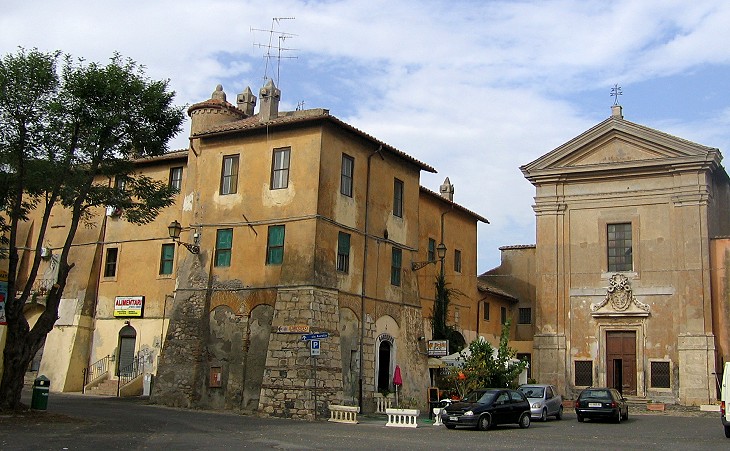 A Roman road was not just the actual engineering work: it also meant a complex logistic system: a statio, at approximately every 15 miles, provided travellers with accommodation, food, stables, horses, etc. Many towns throughout western Europe grew out of a Roman statio.
The current hamlet of Palidoro was ancient statio Baebiana: it became a fortified farm in the XVth century shortly after having been bought by Ospedale di S. Spirito. It has a rectangular shape (similar to that of S. Maria di Galeria) with two small entrances: the church was relocated outside the farm in 1783 by Pope Pius VI, who placed an unusually large coat of arms on its façade.

Via Aurelia comes close to the sea near the castle of Palo which was built in the XVth century during the pontificate of Pope Pius II; soon after it was acquired by the Orsini who in 1687 sold it to Livio Erba Odescalchi, nephew of Pope Innocent XI. The castle still belongs to the Odescalchi who rent it for special events; next to it a former annex to the castle was recently turned into an upscale countryside resort. 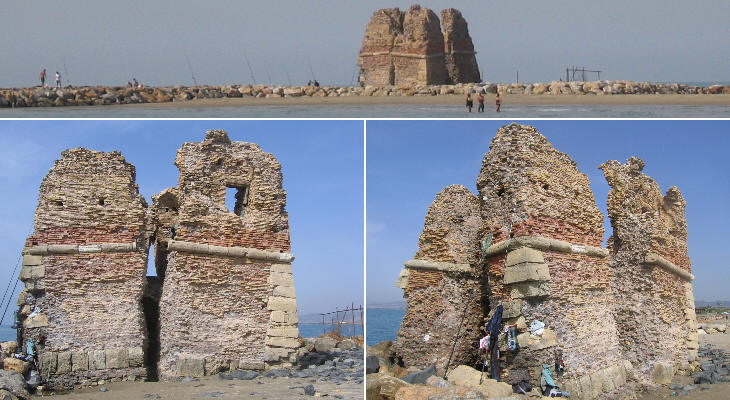 The Orsini were the lords of the area for more than two centuries until they sold most of their possessions, including the castle of Bracciano, to the Odescalchi. Their name or to be more precise that of Cardinal Flavio Orsini (1532-1581) is still associated with the ruins of a tower which is located a few miles north of Palo; the coastline receded and the tower ended up by having to bear the direct impact of the sea. Its leaning aspect reminds the viewer of the leaning house another Orsini built at Bomarzo. See Tor S. Michele, another coastal tower which was built near Ostia approximately at the same time as Torre Flavia. Cardinal Orsini founded Monteflavio in the mountains of Sabina. 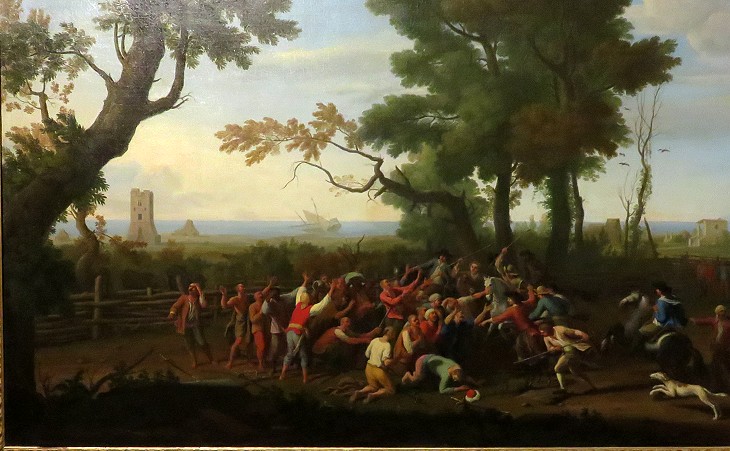 Museo di Roma a Palazzo Braschi: detail of a painting by Adrien Manglard depicting the surrender of Ottoman corsairs at Maccarese near Palo in 1748 Gate and coats of arms of Pope Urban VIII and of other members of the Barberini family above the symbol of Ospedale di S. Spirito

In the IIIrd century BC the Romans built a fortified settlement on the site of Pyrgi, the harbour of Kysry (today's Cerveteri), a powerful Etruscan town; they were at war with Carthage and they wanted to protect the coast near Rome. After the fall of the Roman Empire the site was abandoned; towards the year 1000 a section of Pyrgi was fortified and renamed Santa Severa, after a IIIrd century martyr who was killed there. For a time it was a possession of Abbazia di Farfa. In 1482 it was acquired by Ospedale di S. Spirito.

Ancient Pyrgi: (left to right) a) ancient polygonal walls; b) site of a Roman gate: a stone still shows the resting place of the pivot; c) excavations have found older Etruscan walls made of red tufa blocks upon which the Romans built their own walls

The Etruscan town had an important shrine dedicated to Astarte, a Phoenician goddess whom the Greeks regarded as an Eastern Aphrodite: excavations have found three golden leaves (it opens in another window) with dedicatory inscriptions in both Etruscan and Punic (the Phoenician language spoken at Carthage), which are on display at Museo Nazionale Etrusco di Villa Giulia.

S. Severa: (left): 1792 fountain; (centre) square of the hamlet inside the castle; (right) coat of arms of a cardinal Della Rovere (the family of Popes Sixtus IV and Julius II), "Commendatore" of Ospedale di S. Spirito

The hamlet belonged to Ospedale di S. Spirito until 1982 when it was acquired by local authorities and opened to the public. 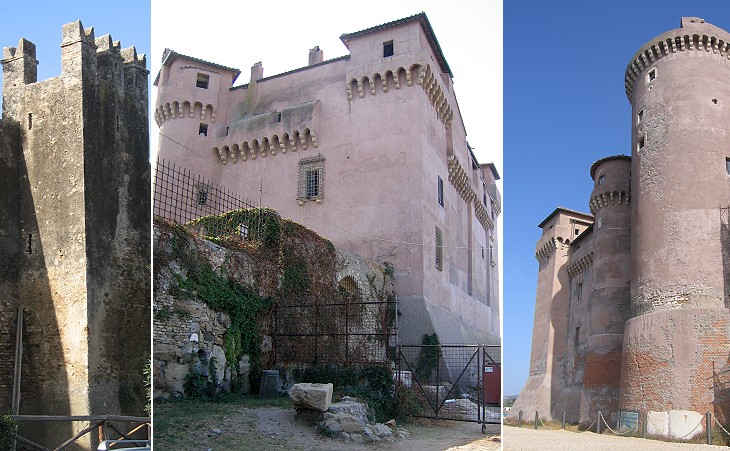 S. Severa: (left): a tower of the external walls; (centre) eastern side of the castle; (right) sea front showing the old tower and the castle

On the sea front S. Severa was protected by a XVIth century castle built next to an existing tall tower.

The growth of the Roman territories led Emperor Augustus to extend Via Aurelia to the current border between Italy and France; Emperor Antoninus Pius promoted a major maintenance effort which was completed by Emperors Septimius Severus and Caracalla; three bridges of the ancient road and a long inscription celebrating the restoration of a fourth one can be seen in the section of Via Aurelia between S. Severa and S. Marinella. 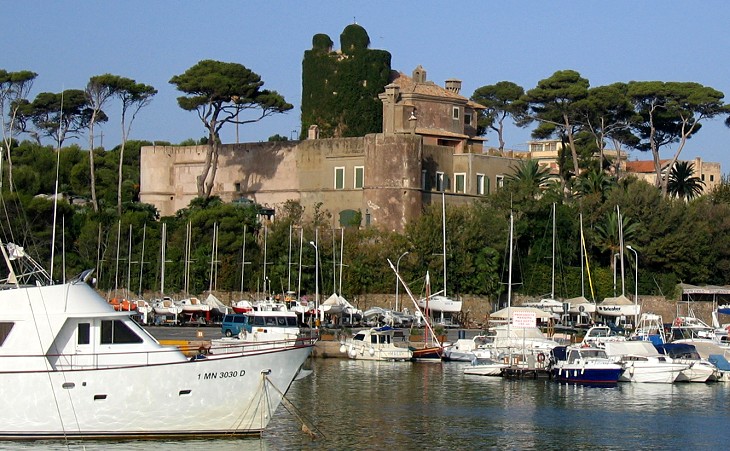 S. Marinella was a small Etruscan port (Punicum) where Ulpian, an advisor to Emperor Septimius Severus and his heirs, built a large villa. In the Middle Ages parts of the villa were turned into a small castle, which was reshaped by the Barberini in the XVIIth century: later on it was acquired by Ospedale di S. Spirito: eventually in 1887 the Odescalchi bought it (they still own it).

Move to Cerveteri and see its necropolis or continue your journey along Via Aurelia by visiting Civitavecchia and Corneto (Tarquinia).