You may wish to see an introductory page to this section or a page on ancient Byblos first. 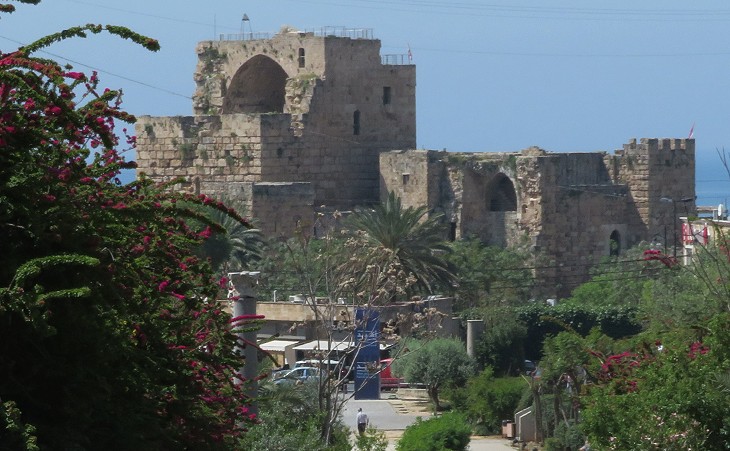 There are very few inhabitants in the town, but many ruinous houses are standing, which show that it has been well inhabited, and probably within two or three ages past. This town was taken by the Christians in the time of the holy war, and followed the fate of Tyre, and other cities of this coast.
Richard Pococke - A Description of the East and Some Other Countries - 1745
There is a small castle here in which the Emir Beshir keeps about forty men.
Johann Ludwig Burckhardt - Travels in Syria and the Holy Land - 1822
Pococke wrote Tyre, but most likely he meant Tripoli, the nearest large town and the capital of the County of Tripoli, a Crusader State which included Byblos, then known as Gibelet. 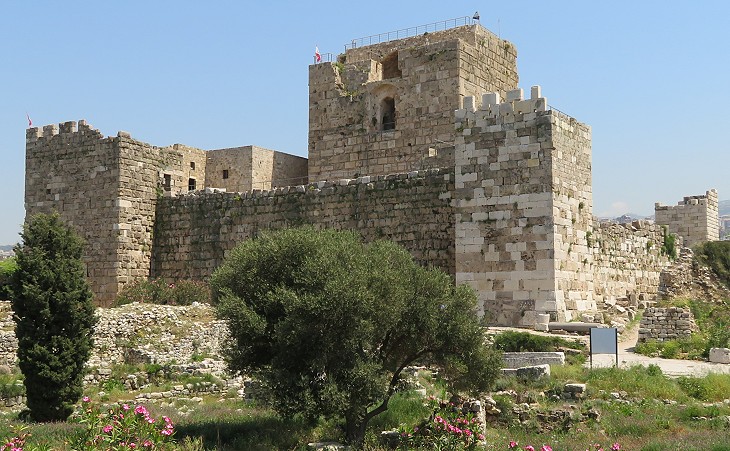 Gibelet was assigned to Guglielmo Embriaco, commander of the Genoese fleet, in return for his help in the siege and conquest of Jerusalem.

Yet now the forts and towers from whence they fought
Were framed by a cunning architect,
William, of all the Genoese lord and guide.
Which late ruled all the seas from side to side.

Torquato Tasso - Jerusalem Delivered - Canto XVIII - Translation by Edward Fairfax - London 1600.
The Embriaco were known after their fiefdom and this usage continued also on Cyprus where they moved in ca 1300 and became one of the most influential families of the island. The castle was built on the site of the acropolis of the ancient town. 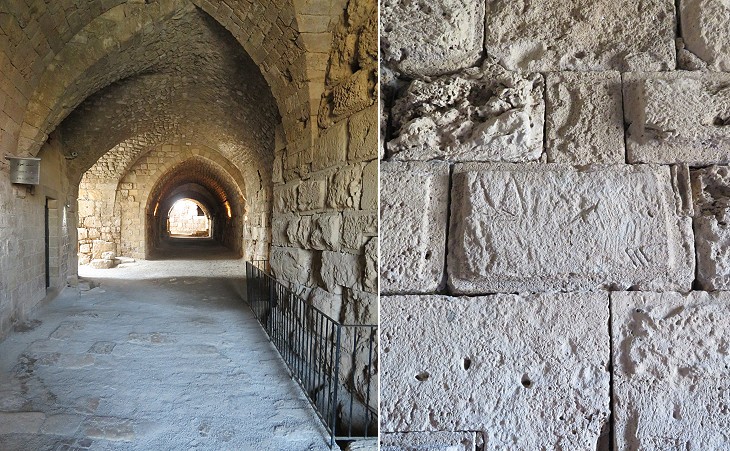 (left) Entrance to the castle with part of an original wall to the right; (right) ancient stones with carved letters

Today the castle is at the centre of the excavations carried out by French archaeologists mainly in the 1921-1940 period. The excavations were aimed at finding the earliest evidence of the town, but French authorities had also an interest in emphasizing the historical presence of the Crusaders in Syria and Lebanon, countries which they controlled owing to a mandate of the League of Nations. This because the main leaders of the Crusades were French. The castle was redesigned to give it a French medieval aspect (this occurred also at Krak des Chevaliers, another castle in the County of Tripoli). 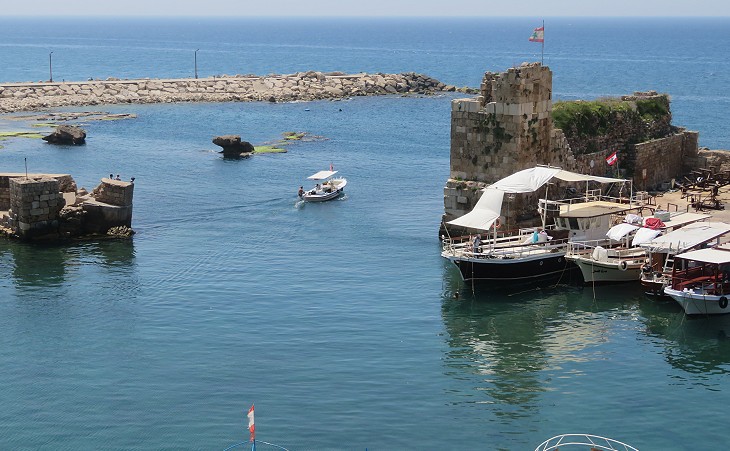 The old harbour is still used by the fishermen of Jbeil and it houses also an assortment of small boats. It stands on the site of the ancient one and is characterized by a small castle, which, similar to the main one, was built using ancient stones. Most likely a chain was lifted between this fortification and the opposite pier to block the access of enemy ships, similar to what can be seen in many other historical harbours, e.g. at Kyrenia/Girne on Cyprus. After having conquered Jerusalem in 1187 Saladin seized Gibelet. The Embriaco were able to regain possession of their fiefdom during the "Crusade of 1197" which is not listed as one of the Nine Crusades because its leader, German Emperor Henry VI died at Messina before sailing for the Holy Land. The German knights who were already in the Levant managed to seize a number of towns between Acre and Tripoli before returning home. 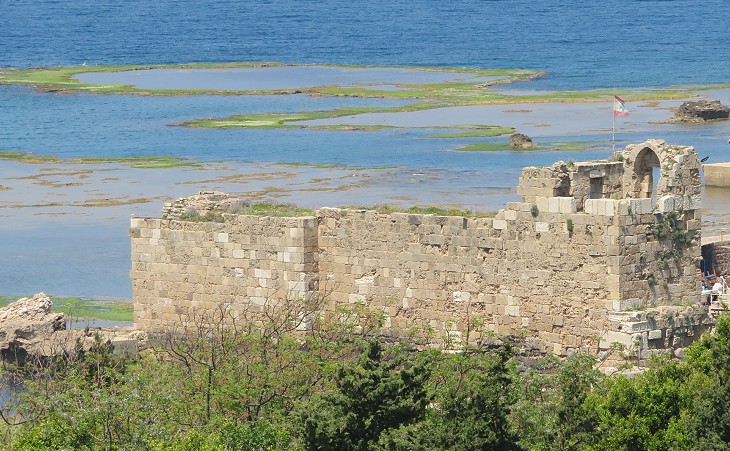 Some archaeologists have highlighted that the size of the harbour does not appear consistent with the loading of ships carrying cedar wood in the form of long beams, a trade for which ancient Byblos was renowned. They suggest that the ships anchored among a series of reefs some of which show evidence of human modifications. 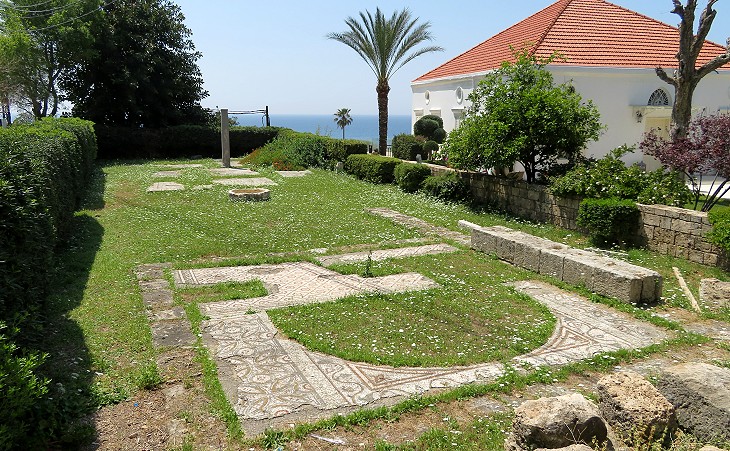 The historical centre of Jbeil retains some of its medieval charm. The fact that in 1984 the town was included in the UNESCO World Heritage List has led local authorities to properly maintain the remains of an early Christian church with a fine floor mosaic. 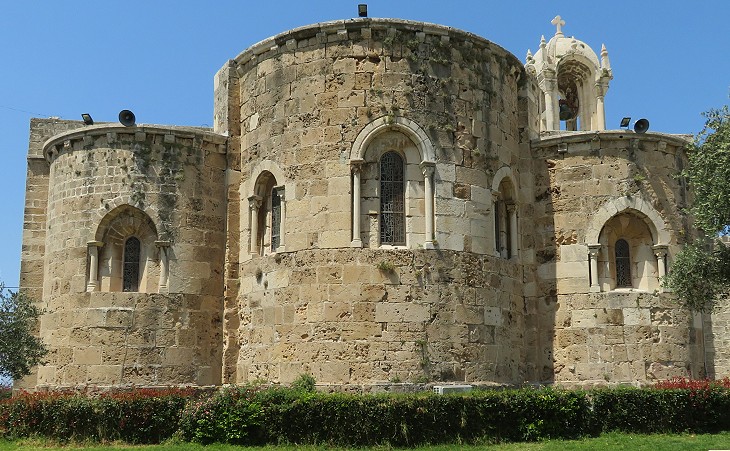 St. John-Mark Cathedral: view of the apses which are similar to those of the former Church of St. John Baptist at Beirut

The main monument of the Crusader period is the Cathedral which was built in 1115 and was dedicated to St. John Baptist. It is now dedicated to St. John-Mark, said to be the first Bishop of Byblos and who is mentioned in Apostles 15:37-38 King James Version:
And some days after Paul said unto Barnabas, Let us go again and visit our brethren in every city where we have preached the word of the Lord, and see how they do. And Barnabas determined to take with them John, whose surname was Mark.
Apart from St. John-Mark, early bishops of Byblos are recorded between 304 and 553. The town was greatly damaged by the Beirut earthquake which occurred in 551. 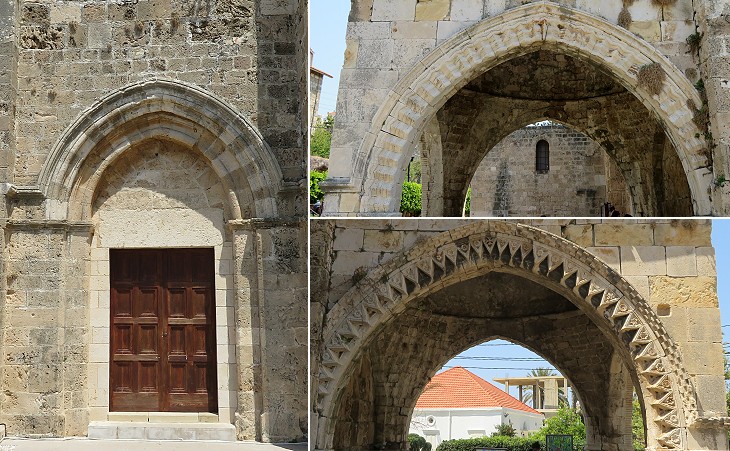 St. John-Mark Cathedral: (left) one of the portals; (right) arches of a baptistery attached to the church; the image used as background for this page shows a detail of another portal

In 1840 Byblos was bombed by a British fleet in the context of a conflict between the Sultan and Muhammad Ali Pacha in which European powers intervened. The front of the church was destroyed, but the apses, the sides and a very original external baptistery were spared.

The inhabitants of Byblos are mainly Maronites and Kesrouan, the region south of the town and north of Beirut, is overwhelmingly Maronite. You may wish to see a section on some Christian communities in Syria. 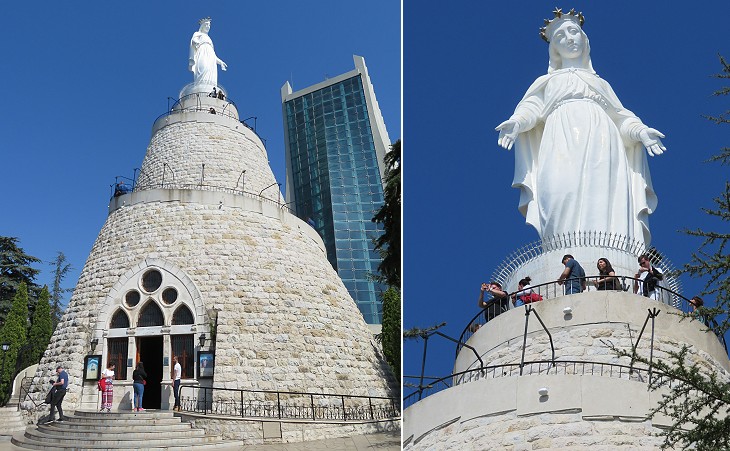 Shrine of Our Lady of Lebanon at Harissa; the statue was made in France and it was erected in 1907

The satisfaction of inhabiting the neighbourhood of places of sanctity, of hearing church bells which are found in no other part of Syria and of being able to give a loose to religious feelings and to rival the Mussulmans in fanatism are the chief attractions that have peopled Kesrouan with Christians. Burckhardt
We went on that evening two miles south to Arissa, to the new-built convent of the Holy Sepulchre. It is most pleasantly situated on a high hill, over the plain which is by the sea shore. Pococke 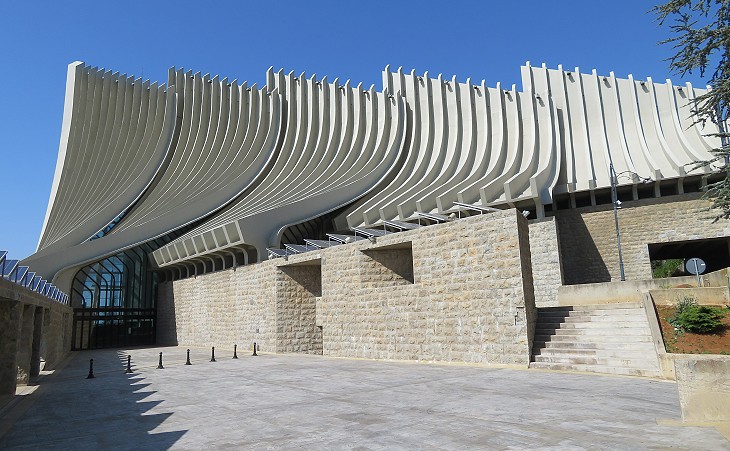 Our Lady of Lebanon - Maronite Cathedral designed by Pierre el-Khoury, a Lebanese architect

At five hours and a quarter is Ghafer Djouni (today's Jounieh), a market place with a number of shops built on the sea side where there is a landing place for small boats. (..) On the top of the mountain is the convent of Harissa belonging to the Franciscans of Terra Santa and inhabited at present by a single Piedmontese monk. (..) Harissa is a well built large convent capable of receiving upwards of twenty monks. Near it is a miserable village of the same name. The view from the terrace of the convent over the bay of Kesrouan and the country as far as Djebail (Byblos) on one side and down to Beirout on the other is extremely beautiful. (..) The district of Kesrouan which is about three hours and a half in length from N to S and from two to three hours in breadth across the mountains is exclusively inhabited by Christians; neither Turks nor Druses reside in it. Burckhardt 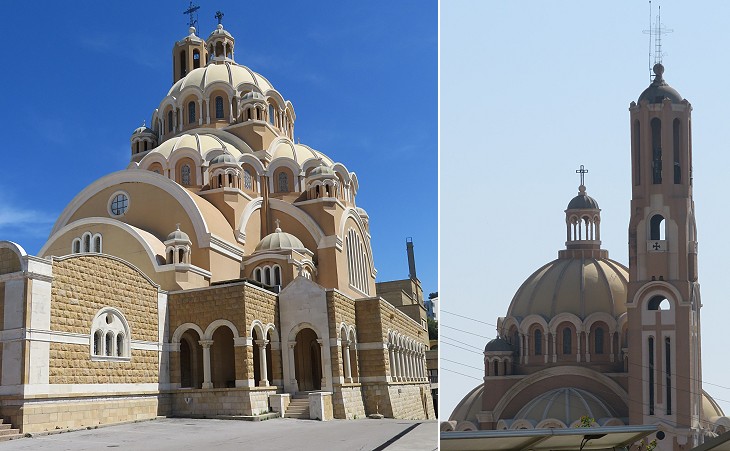 The priests are the most happy part of the population of Kesrouan; they are under no anxiety for their own support, they are looked upon by the people as superior beings and their repose is interrupted only by the intrigues of the convents and by the mutual hostilities of the bishops. Burckhardt
We reached the Apostolick convent in Antura (..) from the window I enjoyed an extensive prospect of the mountains. A few convents were scattered on the hills around, and the stillness of the scene was disturbed only by their bells lightly sounding at long intervals, and by the trickling of the water into the valleys. (..) At eleven we left Antura (..) At a quarter past one we passed to our left the small convent of Harissa.
William Turner - Journal of a Tour in the Levant - 1820
The monasteries and churches of Kesrouan which were visited by Pococke, Burckhardt and Turner were perhaps similar to Saint Anthony of Qozhaya. 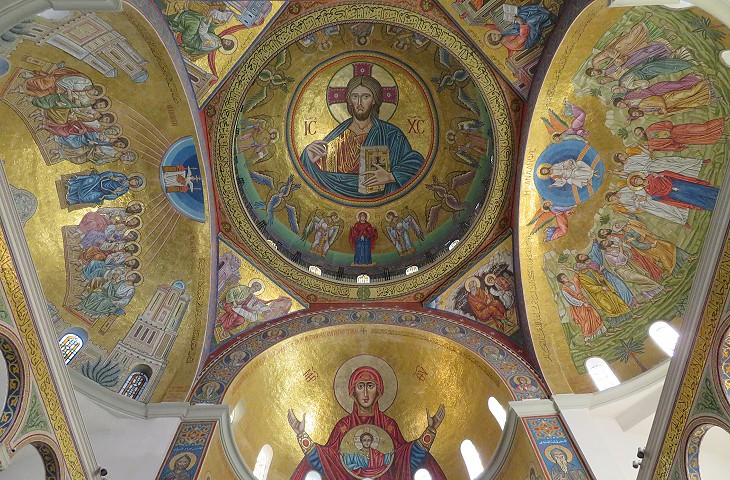