Narni took advantage of the absence of the popes from Rome to increase its self-government, but failed to gain the de facto independence acquired by the Tuscan Comuni (town states), which benefited from the fact that their region was claimed both by the pope and the emperor.
Narni and Umbria were an uncontested possession of the pope and his authority was restored in the 1353-67 period by Cardinal Albornoz. 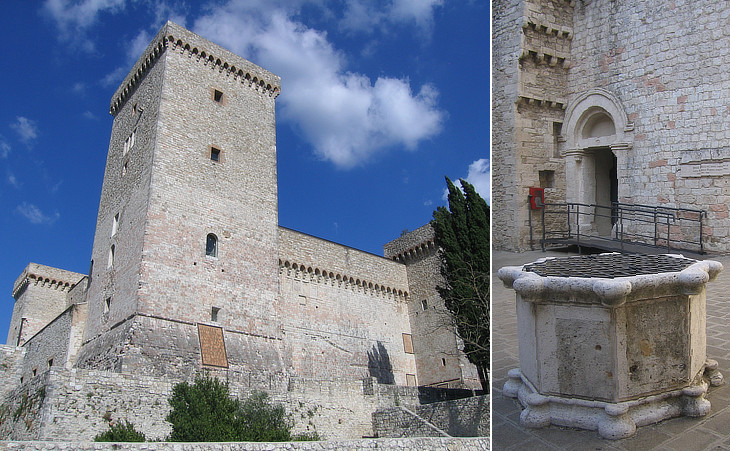 Cardinal Gil de Albornoz built on a commanding position a fortress which was not meant to protect the town from external enemies, but to allow a small garrison to impose the will of the papal government. La Rocca as the fortress is called, was strengthened in the XVth century by several popes including Pope Pius II, whose coat of arms appears in the image used as a background for this page. Where Via Flaminia eventually reached the end of the Nera gorge the Romans founded Narnia, on the site of a previous town they had conquered in 299 BC. The location of the Roman town is visible in the right part of the photo shown above while the left part of the image shows the medieval expansion of the town on a nearby hill. 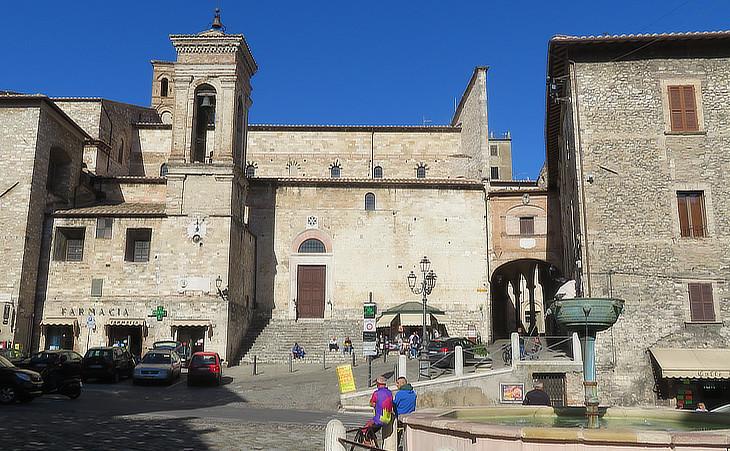 Medieval Narni expanded beyond the boundaries of the ancient Roman town: its cathedral had two accesses (and two bell towers): one from the old town and one (shown above) from its medieval expansion. This new quarter has no monuments or churches: the only exception being S. Margherita, the church of a monastery built in the XVIIth century. 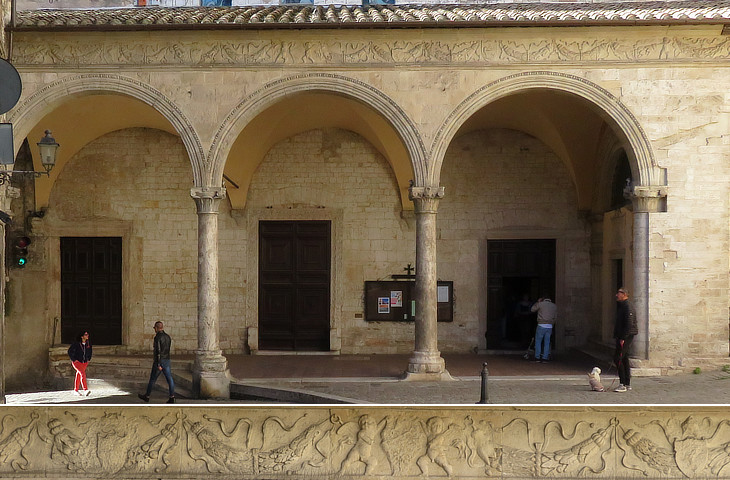 The main entrance to the cathedral was embellished in 1497 by an elegant Renaissance portal decorated by a fine frieze. 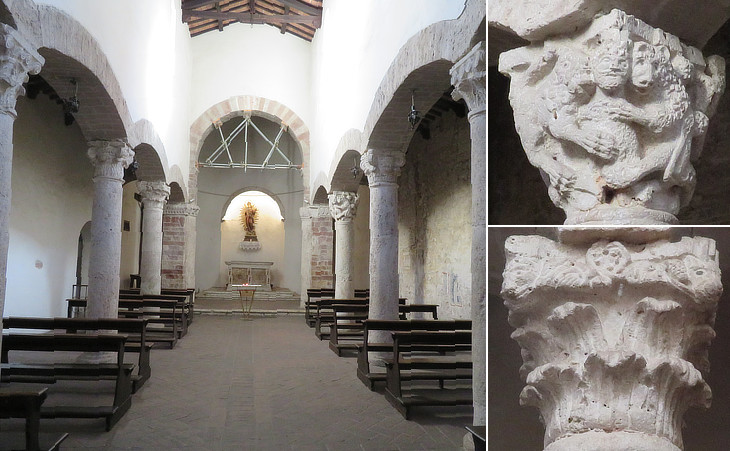 The churches and streets of Narni are decorated by many frescoes; they were not painted by famous artists, but nonetheless they show the characteristic peacefulness of the Umbrian school. 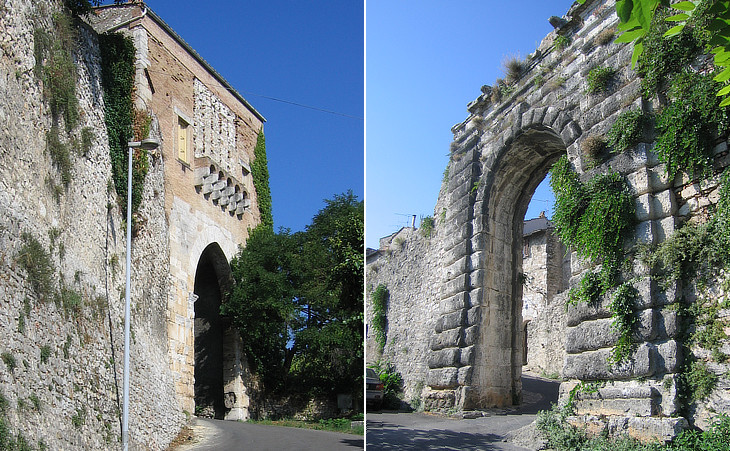 The bus which links the railway station to Narni reaches the town by a modern road: the old road was much steeper and by walking up it, one learns an episode of the town's history. Porta della Fiera is a medieval gate on the ancient Via Flaminia; once you have crossed it you find no evidence of the town; after two or three turns of the road you reach Porta Nuova, an imposing Renaissance gate, behind which you eventually see houses and urban streets: this is because in 1527 the Landsknechts, the mercenary troops of Emperor Charles V who sacked Rome, did the same to Narni, on their way back to Germany. They set fire to an entire quarter of the town, which was never rebuilt: some thirty years later the design of the wall was modified and a new gate was built. 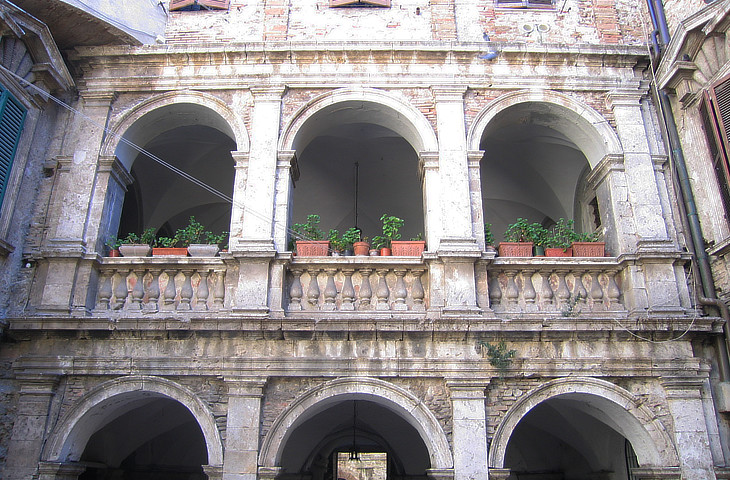 During the Renaissance the medieval appearance of Narni did not change a lot, but the richest families improved their quality of life by building fine courtyards and secret gardens. 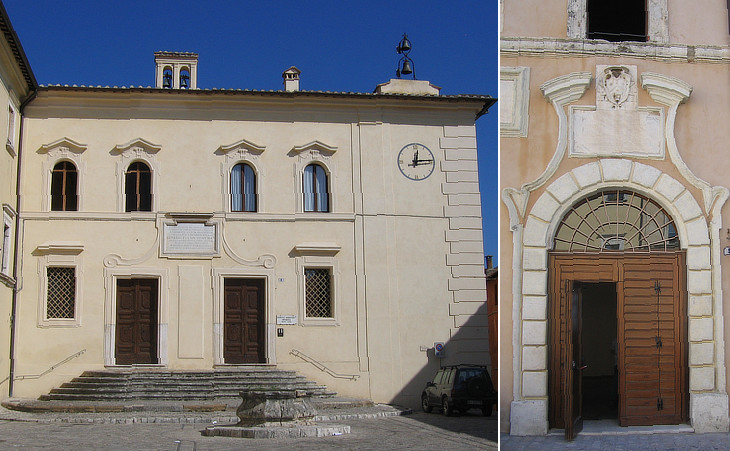 According to President de Brosses who lived in Rome in 1739, a quarter of its inhabitants lived off charitable institutions; this most likely was true also for Narni because the only new buildings completed in the XVIIIth century were orphanages and hospices.

Return to page one or move on to Terni.