You may wish to read an introduction to this section or a page on the history and location of the Abbey first. 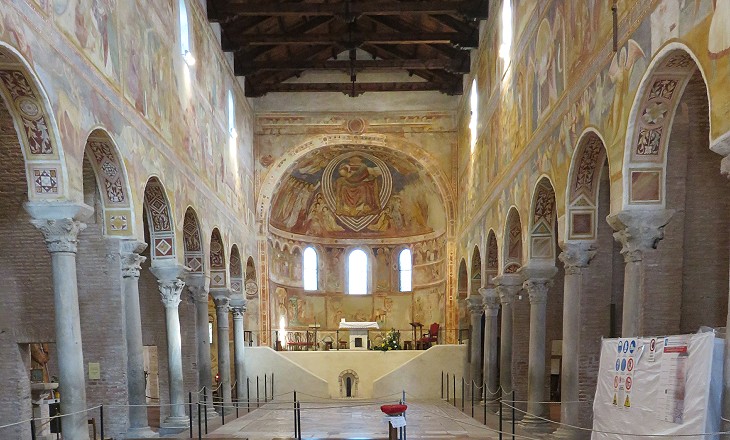 The interior of the church belongs to different periods. Columns and capitals most likely came from abandoned churches of Ravenna and Classe, its former harbour. They were employed to build a church having the same design as S. Apollinare Nuovo and S. Apollinare in Classe. In the IXth century the structure of the building was strengthened with brick pillars. The mosaic floor of the main nave is dated XIIth century, whereas the frescoes were added in the XIVth century and they replaced a previous decoration. 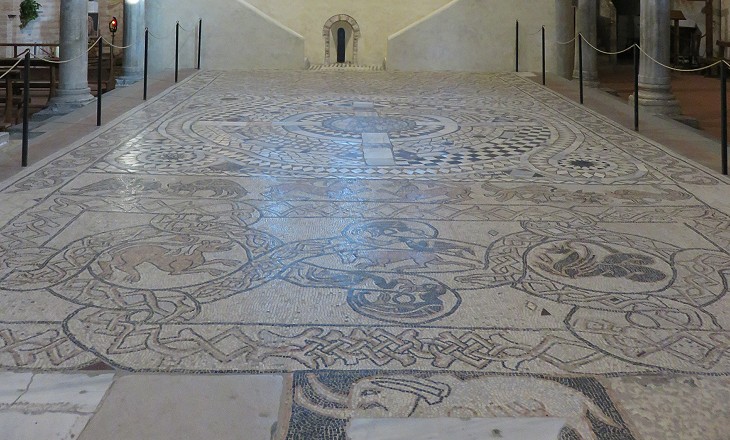 The decoration of the floor is very interesting as it marks the move from the traditional mosaics of the Roman and Early Christian tradition to a new type of decoration based on the use of small pieces of marble or other stones, rather than glass paste, to form geometric patterns. 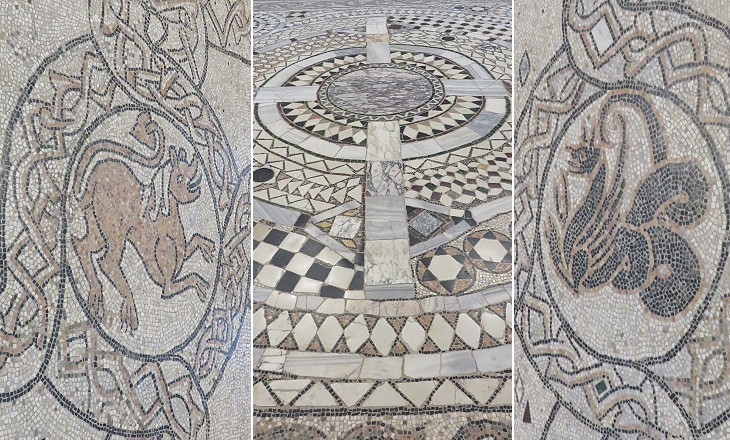 Interior: details of the floor

The traditional mosaic panels mainly portray fantastic or exotic animals which apparently do not seem to have any religious content. The area covered with the new method was designed around a central round slab of coloured marble. Eventually this pattern developed into what art historians call opus alexandrinum or Cosmati work, which is characterized by large porphyry discs. 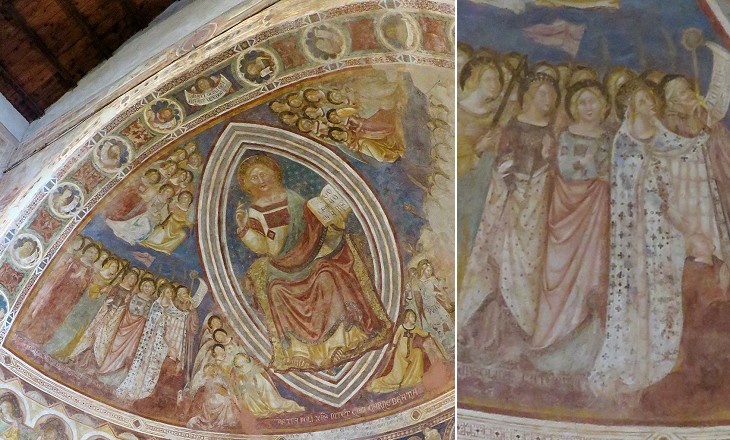 Interior: decoration of the apse (1351-1361) and detail showing a procession of female saints

The frescoes of the church are attributed to painters from Bologna. They were most likely requested to portray Jesus in a very traditional way inside a mandorla (almond nut) shape, because this medieval pattern was used to emphasize the holiness of Jesus (you may wish to see a fresco with a mandorla at St. Saviour in Chora in Constantinople). The procession of female saints is interesting because their embroidered robes form a repertory of Italian luxury silk clothes and Bologna was one of the centres of this industry. 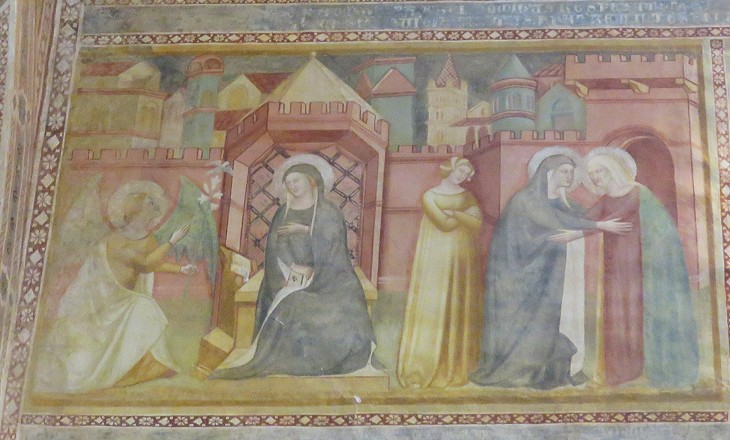 Interior: The Annunciation and the Visitation of Mary to Elizabeth

The dating of the frescoes is based on the fact that in some scenes they depict the Abbot in charge or the Archbishop of Ravenna at the time and chronological lists of them are available. From a stylistic viewpoint they show the developments in Italian art which were brought about by Giotto at the beginning of the XIVth century. 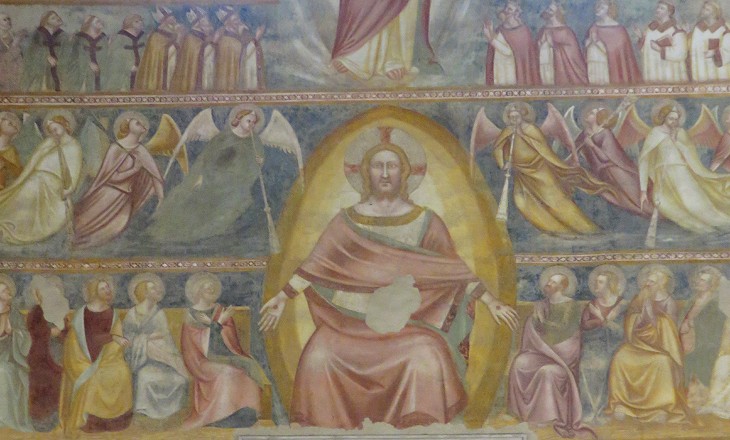 The depiction of the Last Judgement was essential to the purpose of the decoration of a medieval church. It was most often placed on the rear façade so that the faithful would see it on their way out of the church. The scenes depicting episodes of the Old and New Testament had a generic educative purpose, but the Last Judgement was a powerful reminder of the duties of the believers (you may wish to see the Last Judgement at the Greek Orthodox Meteora Monastery of Agios Nikolaos Anapafsas). 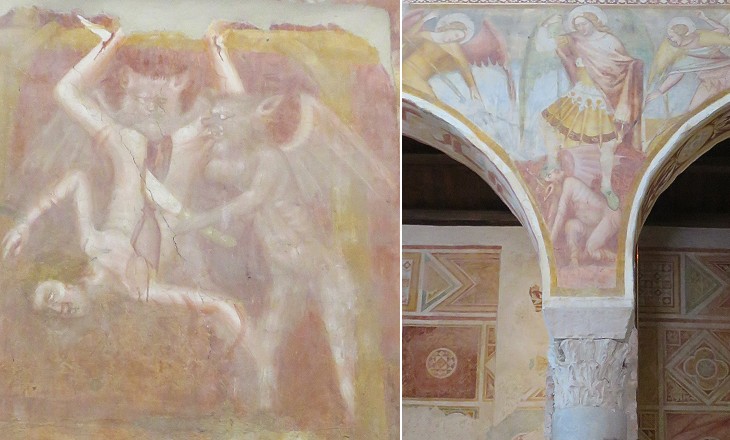 Painters were invited to portray the punishment of the wicked in Hell in the most terrifying and gruesome way. The rule adopted by Dante in his depiction of Hell and Purgatory was based on contrappasso (what you did is done to you), a concept he borrowed from theologians (e.g. St. Thomas Aquinas) and popular medieval "visions" of Hell.
There is a devil behind who tears us cruelly like this, reapplying his sword blade to each of this crowd, when they have wandered round the sad road, since the wounds heal before any reach him again.
Dante - Hell - Canto XXVIII - Prose translation by A. S. Kline.
This Canto deals with the sowers of schism. They divided the body of the faithful so their bodies are cut into pieces. 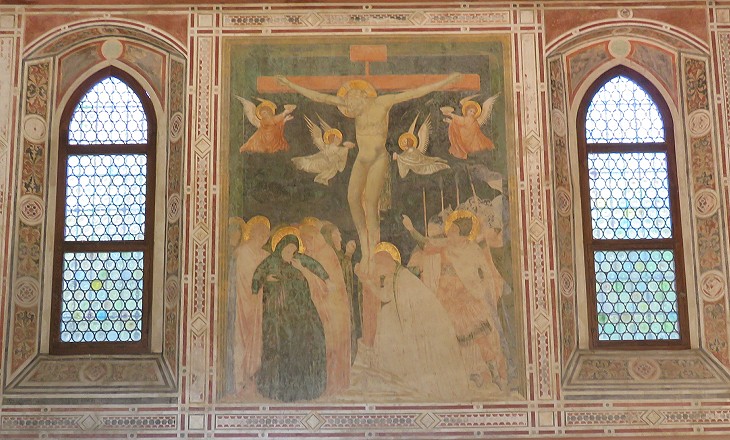 Art historians have debated at length whether the decoration of the Capitular Hall could be attributed to Giotto who at that time was decorating a chapel in Padua, which is not very far from Pomposa. Evidence of the presence of the master has not been found, but no doubt the painter had seen works by Giotto (you may wish to see The Crucifixion by Giotto at Padua - it opens in another window). 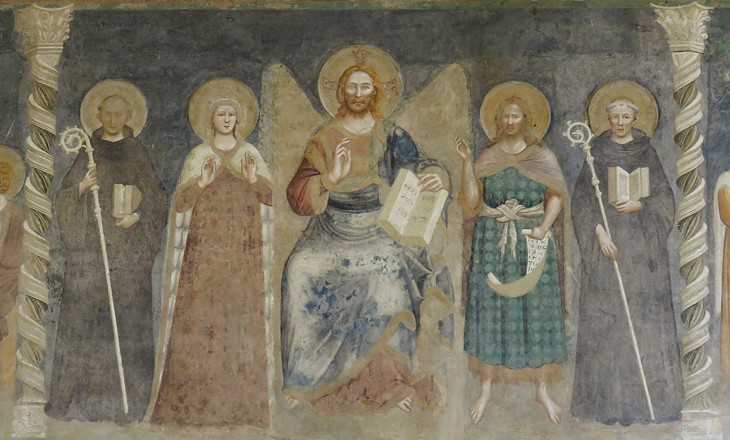 Refectory (1316-1320): Jesus Christ between the Virgin Mary and St. John the Baptist with St. Benedict and St. Guido, Abbot of Pomposa in 1008-1046. Another fresco of the Refectory can be seen in the introductory page

The refectory where the monks had their meals was painted slightly after the Capitular Hall and its frescoes are attributed to Pietro Da Rimini, the likely author of the decoration of a large chapel at Tolentino. The hall includes frescoes with decorative patterns, one of which can be seen in the image used as background for this page. 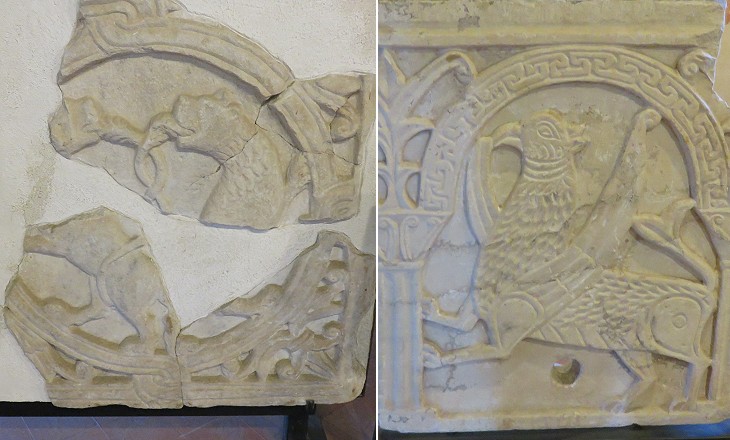 Museum: reliefs belonging to the earliest phase of the Abbey

The XVth century saw the decline of Pomposa which in 1496 was listed among the properties of another monastery. In 1652 Pope Innocent X ordered the closure of the Abbey and the last monks left a few years later.