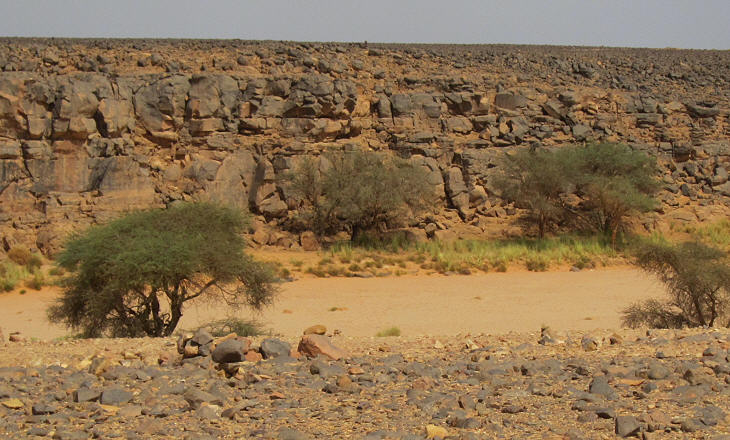 Uadi Mathendush is the dry bed of an ancient river which breaks the flatness of Messak Settafet (White Mountains), a tableland south of Garama in the Libyan region of Fezzan. Occasionally the uadi is rapidly filled with water when the Western African Monsoon reaches these latitudes, otherwise its dry bed is a very useful landmark for those who cross the desert. 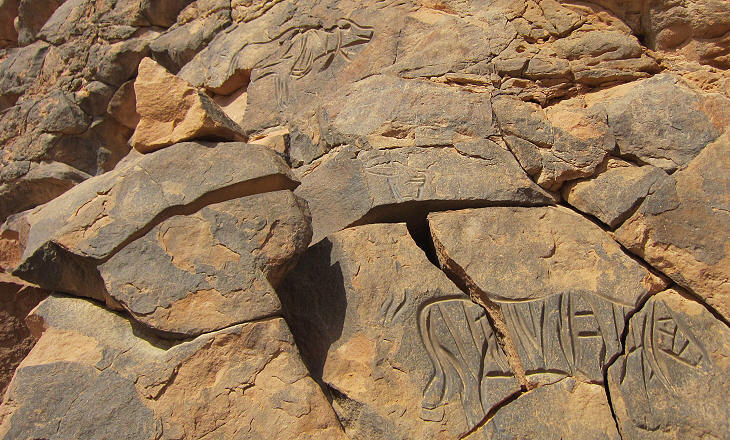 Archaeologists have identified hundreds of carvings along the southern bank of the ancient river; the area of the carvings spans several miles; they were cut by hunters who came to the river to catch, by surprise, animals which were busy drinking; this occurred at the dawn of civilization maybe 12,000 years ago. The purpose of the carvings was most likely a propitiatory one; by representing the animals which made up their main source of food the hunters hoped to attract them to the river. 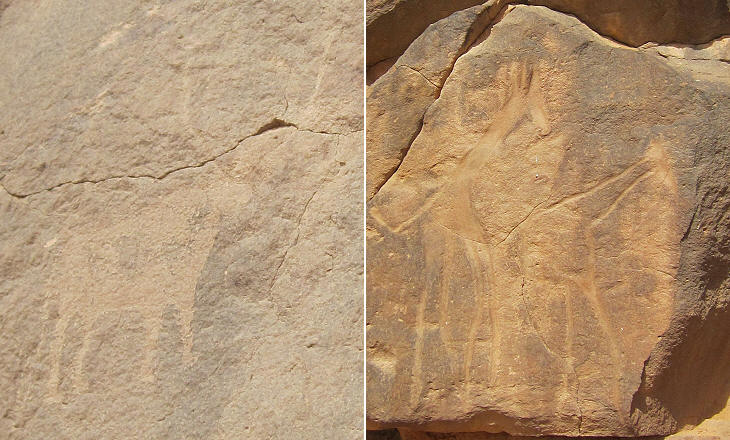 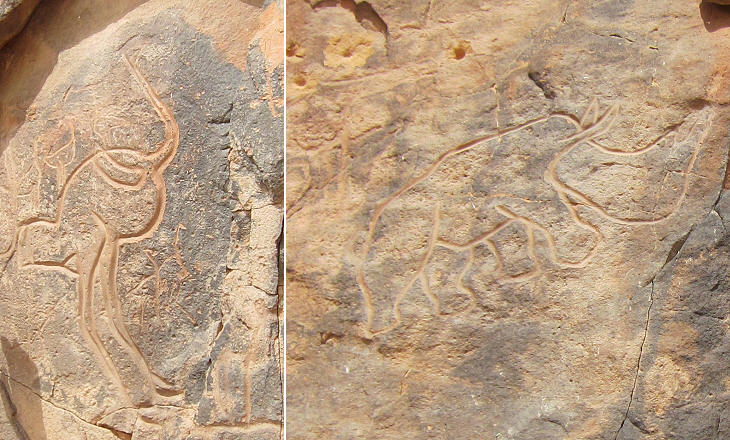 The animals depicted are clear evidence that the ecosystem of the region was that of savannahs which today can be found at very much lower latitudes; it was marked by extended grasslands with small woods; this ecosystem allowed the development of very large mammals such as rhinoceroses and elephants. 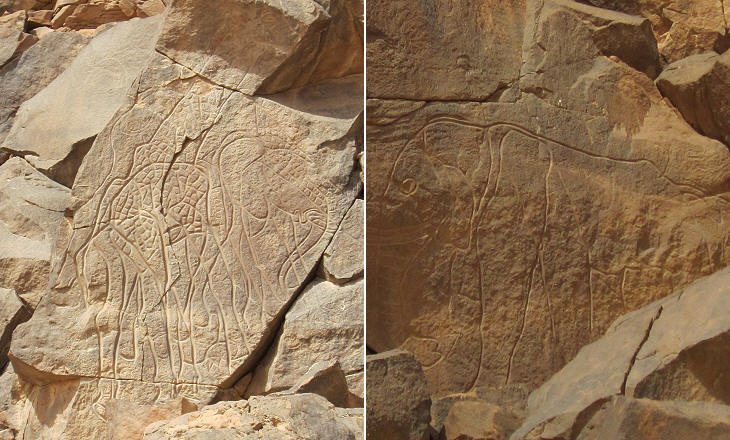 Some of the carvings show an artistic talent in the depiction of some details such as the elephant's trunk or the imposing solemnity of this mammal; it is likely that it was regarded as the king of the animals (instead of the lion). 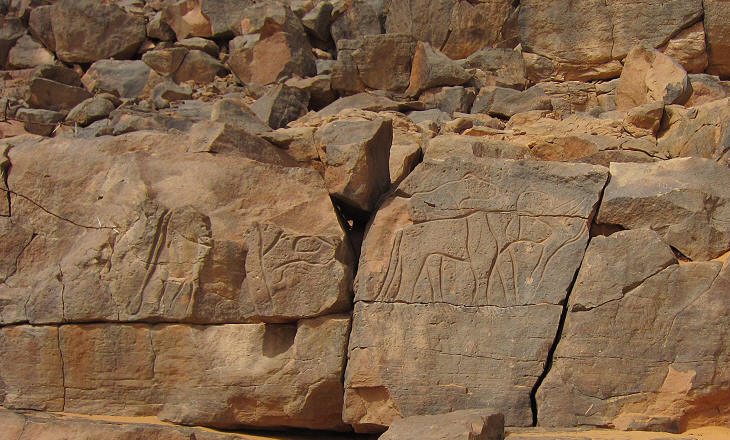 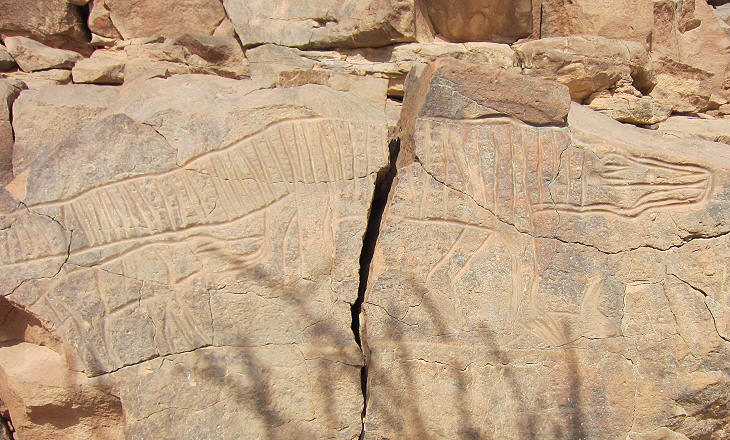 Crocodile with its baby

Some carvings seem to respond to more elaborate religious needs; the crocodile could have been a symbol of the river itself; in Ancient Egypt Sobek, the god who first came out of chaos, was portrayed as a crocodile and this representation probably can be traced back to prehistoric beliefs.
The fact that at Uadi Mathendush the crocodile was portrayed with its baby is probably another indication that it was worshipped. 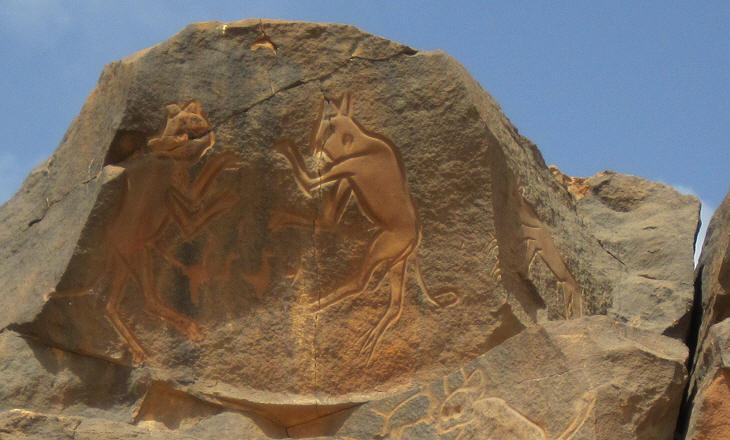 More than one god of the Egyptian pantheon was represented as a cat or had some cat features; the best known carving of Uadi Mathendush portrays two cats; it was cut into a rock at the top of the river bank and because of its size and location it could be easily seen by a small crowd attending ceremonies in the area below; the concept of symmetry is deeply linked with the first development of art and therefore this carving is thought to have been cut later than the other ones and to indicate a step towards civilization. You may wish to see a page on Qobustan, a region of the Republic of Azerbaijan which retains many ancient reliefs which were carved on the rock. 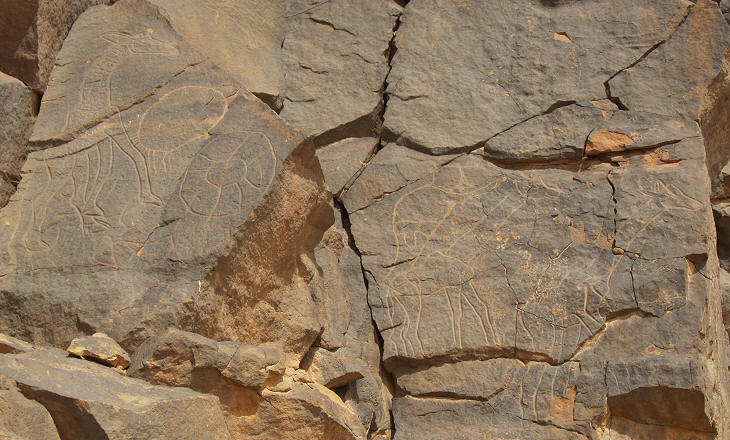 Some carvings or additions to existing carvings belong to more recent times; unfortunately representations of human beings were added in recent years, perhaps with the objective of making the carvings more interesting; Uadi Mathendush is protected only by its remoteness and vandals (or just fools) exist everywhere.