by Girolamo Francino
(an illustration of the guide showing - left to right - the coat of arms of Pope Sixtus V, a generic fountain having some resemblance with that near SS. Venanzio e Ansovino and a personification of the City of Rome)

Mirabilia Urbis Romae (important/marvellous things to see in the City of Rome) was the title of the very first guides to Rome which in the Middle Ages gave a short description of its monuments.
Indulgentiae Ecclesiarum Urbis Romae were guides which started to appear after the First Jubilee (1300); they were aimed at the pilgrims who came to the Eternal City to gain indulgences i.e. the total or partial remission of the time to be spent in Purgatory by their souls or those of their relatives. They gave information on the indulgences granted in the seven main churches and in some cases there were references to other churches where holy relics were kept.
Towards the end of the XVth century German printers established themselves in Rome and started publishing guides which covered both Mirabilia and Indulgentiae: these books had some illustrations made by wood-engraving.
In 1552 the great architect Andrea Palladio wrote a description of the monuments of Ancient Rome. This section was reprinted at the end of a new guide published in 1588 by Girolamo Francino, a Venetian bookseller who opened a shop in Rome. The guide was published at a very key moment: Pope Sixtus V was in the process of introducing significant changes to the urban landscape of Rome (to the point that many scholars regard him as the founder of Modern Rome). The title of the guide made reference to the obelisks (Guglie) the Pope placed near four important churches and to Acqua Felice, the first aqueduct to be built after the ancient ones were destroyed during the Greek-Gothic War. The illustration of the frontispiece showed the coat of arms of Pope Sixtus V, the obelisks, the aqueduct and a personification of the City of Rome; the aqueduct ends at Mostra dell'Acqua Felice, a monumental fountain.
Francino's guide is regarded as the first illustrated guide to Rome, because the description of the churches is accompanied by ninety small wood-engravings. These illustrations are sketchy and in some instances they do not seem to be based on actual observation of their subject, yet they provide an interesting overview of the churches of Rome before the changes introduced during the Baroque period.

The first chapter of the guide deals with the "Sette Chiese", the seven major churches of Rome.
Pope Leo X underestimated the importance of the Reformation. His successor Pope Adrian VI did not have time to deal with the theological issues raised by Martin Luther. Pope Clement VII personally felt the loss of authority of the Roman Church in 1527 when Lutheran mercenaries sacked Rome, yet he mainly believed in political alliances to stamp out the heresy. It was only during the pontificate of Pope Paul III that initial steps were taken to fix the Catholic Church doctrine.
This process lost impetus in 1550 with the election of Pope Julius III whose lifestyle and interests were very mundane. As a reaction to this new moral climate Filippo Neri, a Florentine preacher who had just been ordained, on the Thursday before Lent in 1552, invited the Romans to join him on a pilgrimage to the Seven Churches, instead of attending the Roman Carnival. The pilgrims stopped at the churches to listen to sermons and during the procession they chanted: Vanity of Vanities! All is Vanity! The initiative met with great success and over the years it became a must for the pilgrims who came to Rome. In 1575 Antoine Lafréry printed a map of the City highlighting the location of the churches (all of which are designated as basilicas). The map was engraved by Etienne Dupérac. 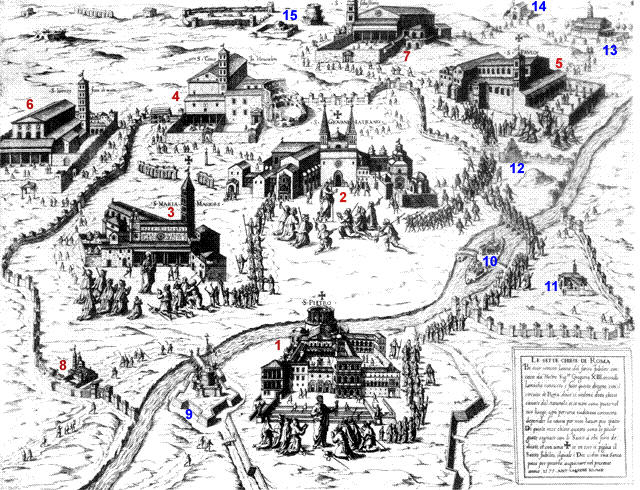 Lafrery's work served as a reference for some illustrations of the guide. The visit to the Seven Churches attracted the interest of lay travellers too, including not Roman Catholic ones: Now being to describe the antiquities of Rome, I will first set downe out of order the seven Churches, famous for the indulgences of Popes, which they say were built by the Emperour Constantine the Great. (..) The first day being to visit these seven Churches, by reason of their distance, and the hast we made, I and my consorts hired each of us a mule, each man for two paoli, and we never found our errour till the evening, when we demanding the way of a man of meane sort, he replied thus with some anger; What doe you ride to heaven, and we poore wretches goe on foote without shooes to visit these holy Churches. By this we found our errour, and were glad that we had passed that day without further danger.
Fynes Moryson - An Itinerary: Containing His Ten Years Travel Through .. Italy (in 1594)
We have not forgotten how Philip Neri frequently, by way of duty, made a visit to the seven principal churches of Rome, thereby manifesting the fervour of his devotion. It must here, however, be remarked that a pilgrimage to these seven churches is demanded of every pilgrim who comes hither to the Jubilee; and seeing the visit must be paid in one day, and that the churches stand at a wide distance from each other, the visit may well be regarded as another fatiguing journey.
J. W. Goethe - Italian Journey - Translation by Charles Nisbeth 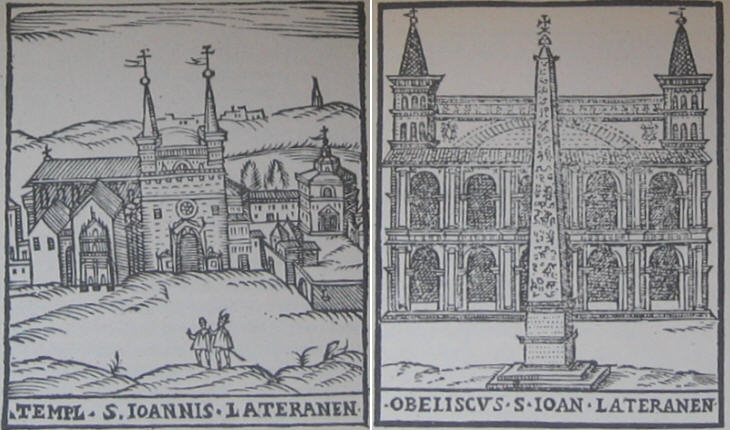 S. Giovanni in Laterano: (left) before the changes introduced by Pope Sixtus V; (right) after the changes

S. Giovanni in Laterano is the first church described in the guide; two aspects in particular were covered in great detail: a) the indulgences granted to those who visited the church (they varied according to the day, the largest indulgences being granted on those dedicated to St. John the Baptist and to St. John the Evangelist); b) the relics which were kept in the basilica and which were shown to the public on Easter Day. The guide reports the traditional account that Emperor Constantine was baptized in S. Giovanni in Laterano, while it is now thought that this occurred at Nicomedia where he lay dying.
The illustrations show the basilica before the changes introduced by Pope Sixtus V; that on the left is based on Lafrery's map and it shows the basilica including its baptistery, while that on the right is a very accurate, almost technical representation of the loggia on the side façade which was built by the Pope and of the ancient obelisk he placed in front of it.

(left) S. Pietro; (right) the obelisk placed in front of the basilica

The description of S. Pietro is again centred on indulgences and relics; by reading the guide we learn that there were days when the value of the indulgences was doubled: the list of relics is very long and it is interesting to note that the guide expands on four of them which some fifty years later were placed in the Octagon of the new basilica.
The illustration of S. Pietro (based on that by Lafrery) is almost unique because it shows both the old and the new building. The old basilica was preceded by a large courtyard; the entrance to the courtyard was flanked by a three-storey loggia from which the pope gave his blessings. The façade of the old basilica was still in place, but behind it the gigantic dome was in the process of being completed.
Pope Sixtus V moved to Piazza S. Pietro an obelisk which stood near Rotonda di S. Andrea (the round building to the left of the courtyard where the sacristy was located). The event was regarded as a step forward in engineering: it was the first time in 1,200 years that an obelisk had been safely relocated. The second illustration shows in detail the obelisk and the length of its components; the measurements are stated in Roman palms (1 palm=0,2188 m; 1 palm=0,7178 ft). 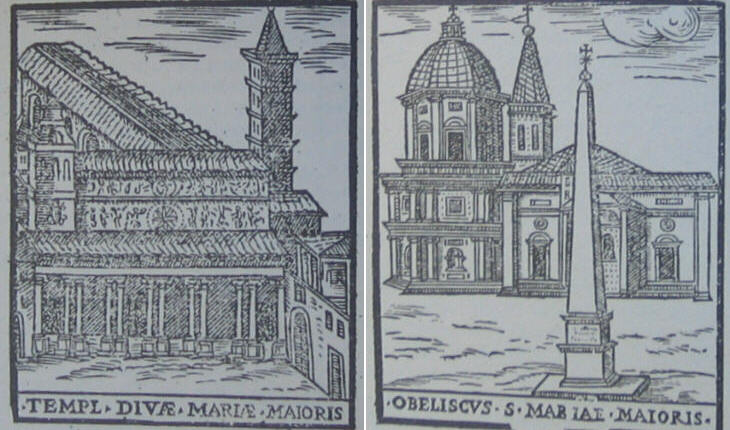 Pope Sixtus V was a great supporter of the pilgrimages to the Seven Churches and he opened several streets to facilitate the access to them and in particular to S. Maria Maggiore, the great basilica which was located near his villa.
The illustration to the left shows the original church which actually is not very different from the current one, although at first sight one would tend to think otherwise. The fact is that it has been "encapsulated" by a series of additions: two sacristies were placed to the sides of the façade which in turn was hidden behind a loggia. In the rear part of the basilica two large chapels were added and the apse was surrounded by a circular wall having on top large statues. The second illustration shows the changes introduced by Pope Sixtus V: Cappella Sistina, the first chapel to be added, and the obelisk which was placed in front of the apse. Of the two representations of the bell tower, that on the left is the more accurate one. From the guide the 1588 reader learnt that visiting S. Paolo fuori le Mura every Sunday for a whole year was equivalent in terms of indulgences to a pilgrimage to Jerusalem or to Santiago de Compostela. The illustration of this basilica is rather confusing; the drawing is a poor attempt to show all its elements. The illustration of S. Lorenzo fuori le Mura is much better and it is pretty accurate. Also this basilica had a day of the week which granted special indulgences. By visiting S. Lorenzo every Wednesday for a whole year the worshipper could free a soul from Purgatory. 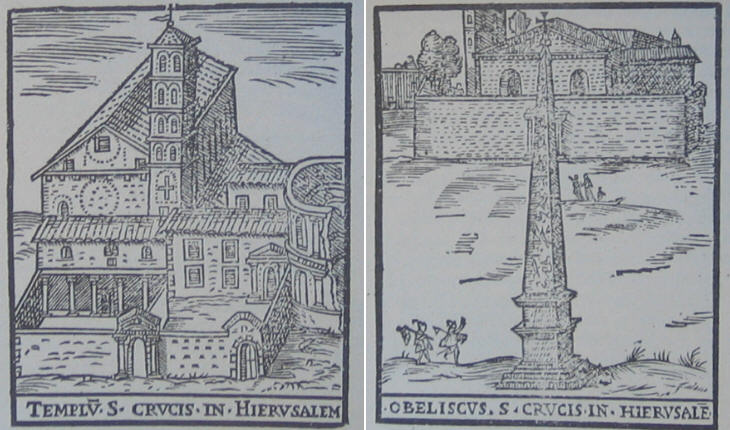 (left) S. Croce in Gerusalemme; (right) the obelisk which was expected to be placed near the basilica

The writer of the guide made some assumptions which eventually proved wrong; so an illustration showed an obelisk near S. Croce in Gerusalemme. Francino assumed that Pope Sixtus V would have, or was going to place, close to the basilica, an obelisk found in 1570 near Porta Maggiore. Probably the Pope had expressed this intention, but his death in 1590 stopped the project. This obelisk was later on acquired by Pope Urban VIII for his family palace. After having been placed for some time in Cortile della Pigna it was relocated to the Pincio Gardens. No obelisk was ever erected near S. Croce in Gerusalemme.
The basilica is shown before a new façade was built by Pope Benedict XIV. 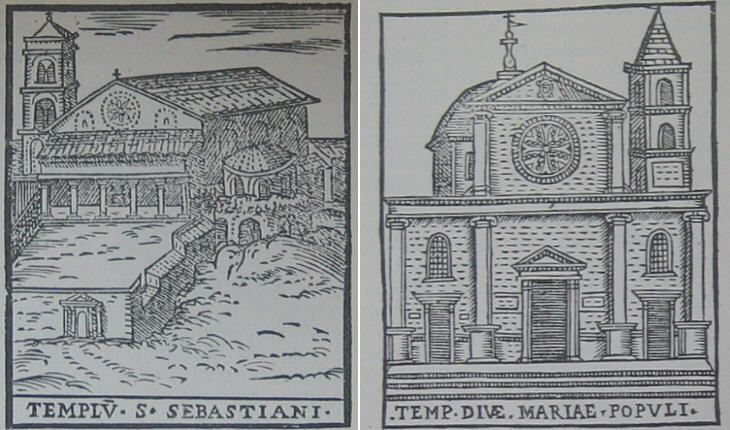 S. Sebastiano which is located along Via Appia was not within easy reach for the pilgrims of the XVIth century. For this reason Pope Sixtus V decreed that S. Maria del Popolo could replace S. Sebastiano as the seventh basilica to be visited. In order to signal the greater importance of this church he placed an obelisk in its proximity; the exact location took into account the effect the obelisk would have made on those who entered Rome by Porta del Popolo, but similar to most decisions taken by Pope Sixtus V, a religious justification supported the embellishment of the City.
The illustrations show S. Sebastiano as it was before the changes introduced in 1612 by Cardinal Scipione Borghese and the façade of S. Maria del Popolo before its restyling by Gian Lorenzo Bernini for Pope Alexander VII.