Scenes of Ordinary Life in Rome

The etchings by Giuseppe Vasi (1710-1782) and Giovan Battista Piranesi (1720-1778) dominated the Roman print market well after the death of the two artists. Their heirs continued to sell copies of their views of ancient and modern monuments, thus leaving little room for new engravings.
Bartolomeo Pinelli (1771-1835) developed a market niche of prints which portrayed the costumes and the everyday life of the Roman lower classes. He gained a reputation in this field and, when the views by Vasi and Piranesi became obsolete, he collaborated with Luigi Rossini (1790-1875) in adding figures to the new views of Rome by the latter.
Rossini gained a lot from his works and he could afford to live in Palazzo Tanari; Pinelli barely made ends meet, yet today his prints are more popular than those of Rossini. 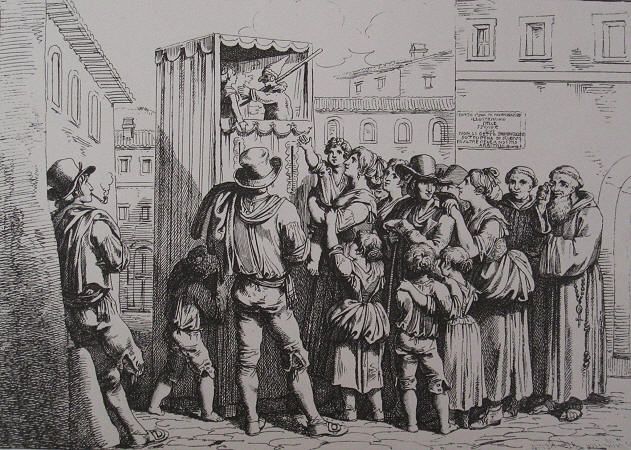 Unlike Vasi, who regarded himself as an architect, Pinelli did not pay a lot of attention to the accuracy of the buildings he depicted in his etchings; in the house shown to the right the size of the windows is not in proportion with the warning inscription below them, which Pinelli enlarged in order to make its content readable.
The focus is on the characters: the audience is made more interesting by the addition of two Franciscan monks.

Punch (It. Pulcinella) is still alive at Terrazza del Gianicolo, although one wonders for how long. The set up and the stories are those of the tradition: the show reaches its climax when the characters beat each other with a big club. 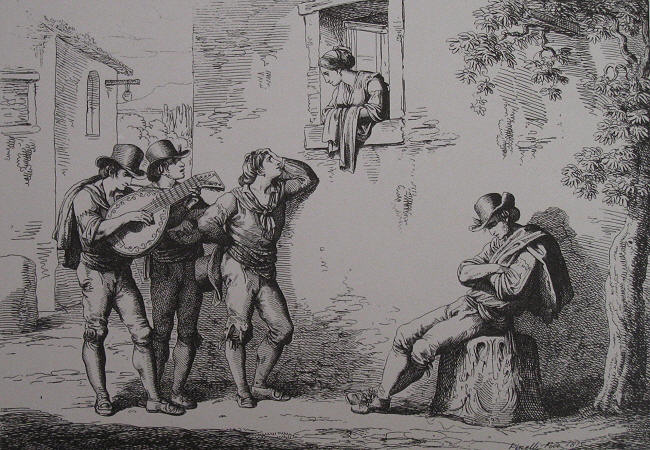 Cielo sereno in Italian means clear sky. And a clear sky is necessary when you go to sing under the window of your beloved. Usually serenades were sung and played by professional musicians on behalf of the suitor. This tradition which dates back to the Renaissance and even further is lost. Roman nights do not have enough calm and peace any longer and suitors have been replaced by boyfriends. 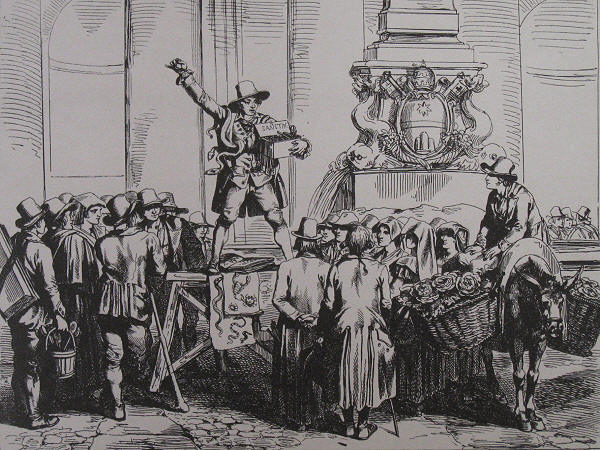 A Charlatan at Piazza della Rotonda

The building in the background of this scene is the Pantheon, but Pinelli was not interested in it. Also the representation of the coat of arms is not accurate. Pinelli's attention was focused on the group of persons around the charlatan: this was a seller of antidotes to counteract the bites of snakes, scorpions and spiders (the snakes he carried with him were meant to prove the effectiveness of his products). In the box he had some pincers, so he was also in the trade of extracting teeth.
Piazza della Rotonda was a traditional venue for this kind of charlatans and also Vasi showed a similar scene taking place there. In 1823 Pope Pius VII demolished two small buildings which housed many cheap inns; they were located to the north of the obelisk. In 1847 other steps were taken to eradicate this sort of market. 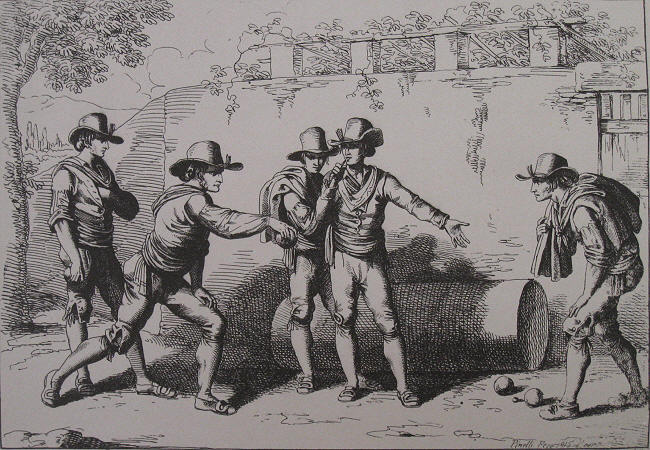 In his view of S. Sabina, Vasi portrayed a group of gentlemen playing bowls, but their XVIIIth century attire does not seem very appropriate for such a game. Pinelli's players are much more credible although, unlike Vasi, he reduces too much the distance from which bowls are thrown.

The purpose of the game is to place the large bowls closest to the jack (a smaller ball). The teams are usually composed by two members each for a total of four large bowls to throw. Vasi and Pinelli showed the players in the act of trying to knock either the jack or another ball away (bocciata). This attempt is usually made in the final stages of the game, after the members of the other team have managed to place their balls very close to the jack by carefully rolling them (accosto). The photos were taken at Bocciofila la Piramide in Testaccio, a quarter of Rome where old traditions are kept alive. 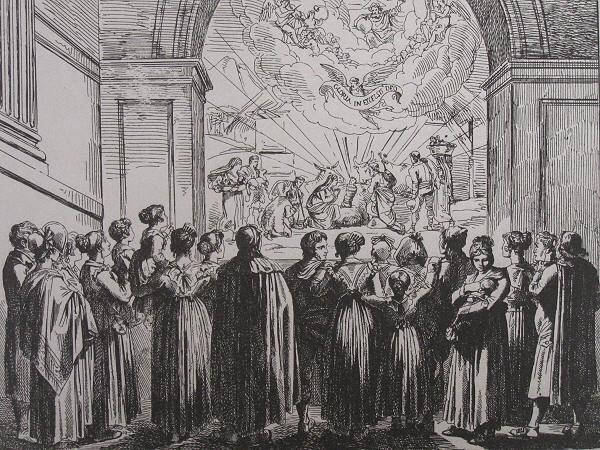 The Crib at S. Maria d'Aracoeli

In general Pinelli preferred to portray the costumes of the Roman lower classes and in particular those of the peasants which were more picturesque. For the traditional tour of the cribs which takes place at Christmas, Pinelli portrayed a more urban and middle class audience. He did not give an exact indication of the church in which he set this scene, but surely he had in mind the crib at S. Maria d'Aracoeli.
Pinelli was not very keen on performing his religious duties. In 1834 he was publicly reprimanded for not having attended Easter ceremonies. On the next year he died because of his heavy drinking.
Giuseppe Gioacchino Belli wrote a sonnet to commemorate Meo (Bartolomeo) Pinelli. 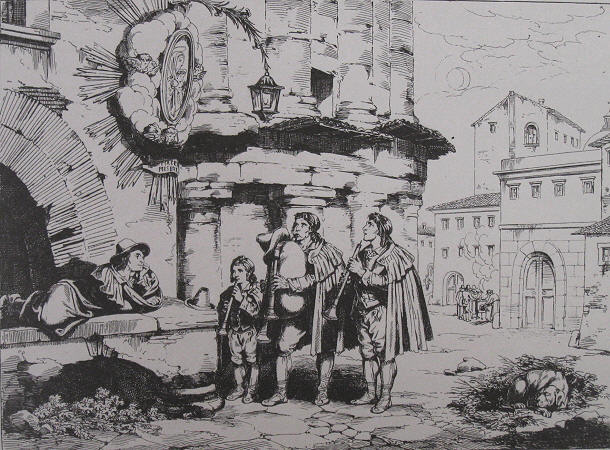 On December 13 1786 J. W. Goethe noted in his diary: Here (in Rome) you do not notice the winter. The only snow you can see is on the mountains far away to the north.. The arrival of Christmas was not announced by cold weather, but by the sound of bagpipes and shawms. Shepherds used to come to Rome to play their traditional instruments in the hope of receiving a small reward. Today the sound of bagpipes can only be heard in the shopping districts of Rome.
Pinelli shows another traditional aspect of the pre-Christmas period; the sale of hot chestnuts (the detail can be seen in the image used as a background for this page). In the past chestnuts were a staple food for many Italians living on the Apennines. Today they have become pretty expensive because picking the fruit is labour intensive.

You may wish to see more scenes of ordinary life or Bartolomeo Pinelli's Picturesque Brigands.