Seminario Romano
(Vasi at work in the Grand View of Rome)

Links to this page can be found in Book 9, Day 1 and Day 4, View C7, Rione Pigna and Rione Colonna. 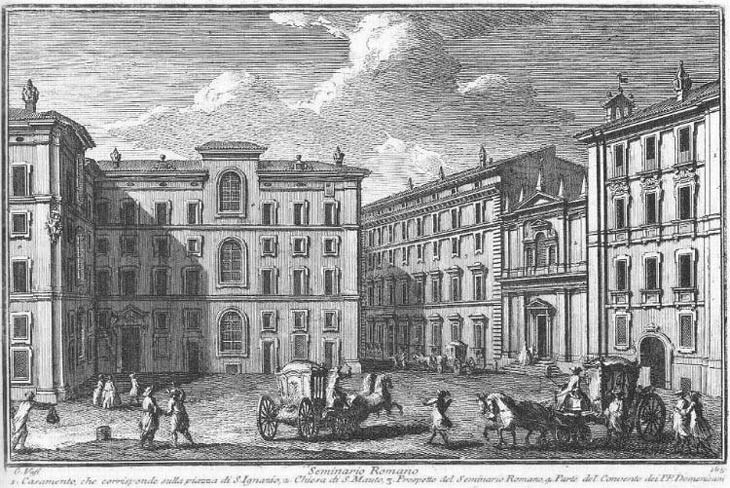 In this etching Giuseppe Vasi gave rather more relevance to Dominican Monastero della Minerva than to Seminario Romano which belonged to the Jesuits and which was almost an appendage to their nearby Collegio Romano. He probably did so because the street where Seminario Romano is located is very narrow and it does not allow a proper view of the building. Jesuits and Dominicans belonged to orders having great influence on the decisions of the popes; they apparently cooperated, but they also competed for increasing their power. In 1759, when Vasi published this etching, the Jesuits had a major role in the education of the upper classes, but many European monarchs resented their indirect influence on state matters. Seminario Romano was closed in 1772 and the Jesuit Order was suppressed in the following year by Pope Clement XIV.
The view is taken from the green dot in the 1748 map below. In the description below the plate Vasi made reference to: 1) Buildings opposite S. Ignazio; 2) S. Macuto; 3) Seminario Romano; 4) Dominican Monastery adjoining S. Maria sopra Minerva. The small map shows also: 5) Palazzo Serlupi. 1) is shown in another page. The dotted line in the small map delineates the border between Rione Colonna (upper part) and Rione Pigna (lower part). 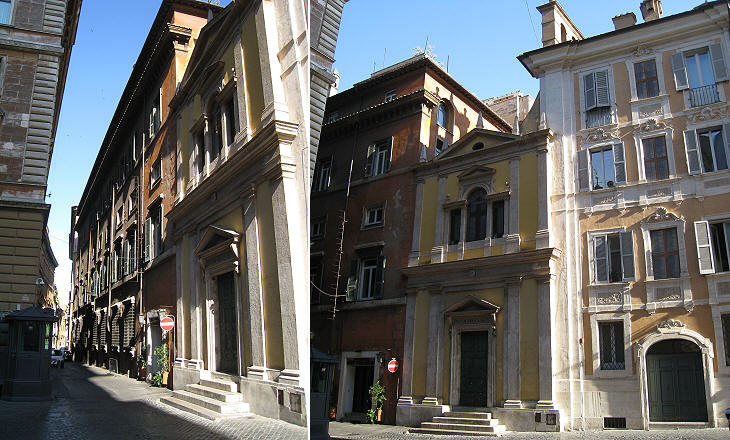 The section of the Dominican Monastery shown in the plate was confiscated after the 1870 annexation of Rome to the Kingdom of Italy and it was slightly modified. Via del Seminario, the street leading to Piazza della Rotonda is as narrow as it was at Vasi's time. 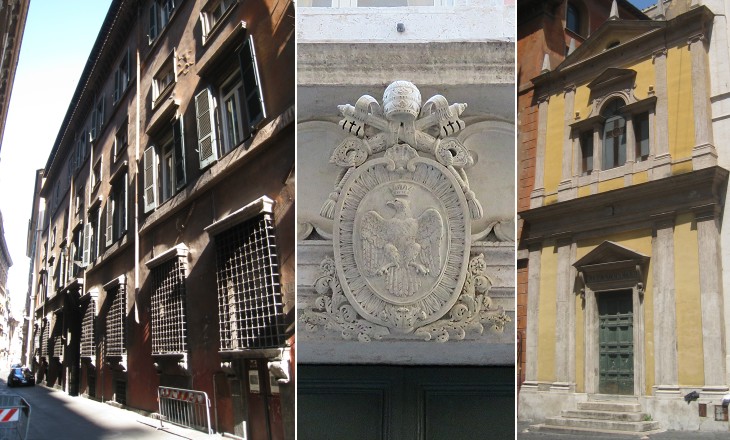 The institution of a seminary for the education of priests was promoted by Pope Pius IV and by Cardinal Carlo Borromeo, his nephew; the institution was housed in several buildings until in 1607 it was moved to an existing palace belonging to the Gabrielli family; the location was very convenient because students attended lessons at Collegio Romano. In 1824 Pope Leo XII assigned the building to the reconstituted Jesuit Order to which it still belongs; it is now known as Collegio S. Roberto Bellarmino, after a Jesuit cardinal who played a major role in the trial of Giordano Bruno, a Dominican monk, in 1600. It is currently used as a residence for Jesuit priests and brothers studying for advanced academic degrees. 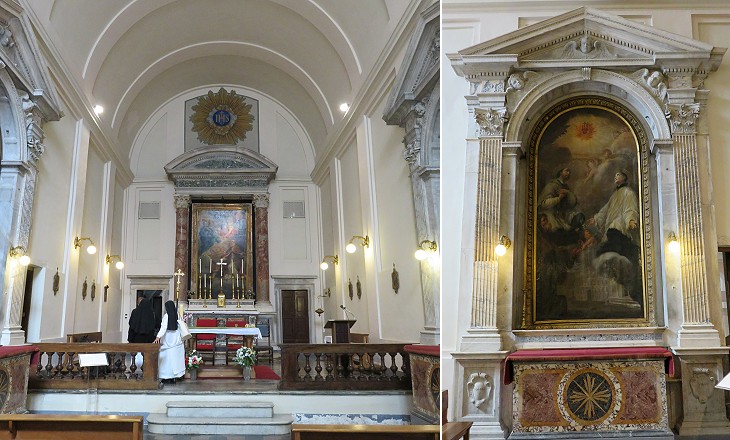 Macuto is the Italian name for St. Malo, a VIth century saint from Wales who founded a monastic settlement on the northern coast of Brittany which eventually became the town of Saint-Malo. In 1539 the small medieval church dedicated to St. Malo was assigned to the brotherhood of the inhabitants of Bergamo, a town in northern Italy; it was then dedicated to Bartholomew and Alexander, the patron saints of Bergamo; the church was rebuilt in the second half of the XVIth century (you may wish to see it in a 1588 Guide to Rome). In 1726 the brotherhood was assigned another church in Piazza Colonna and the original dedication was restored by the Jesuits who used the building as the oratory for the nearby seminary.
The façade of the church is embellished with small obelisks in memory of the obelisks found in this area, where Iseo Campense, a Temple to Isis, the Egyptian goddess, was located. 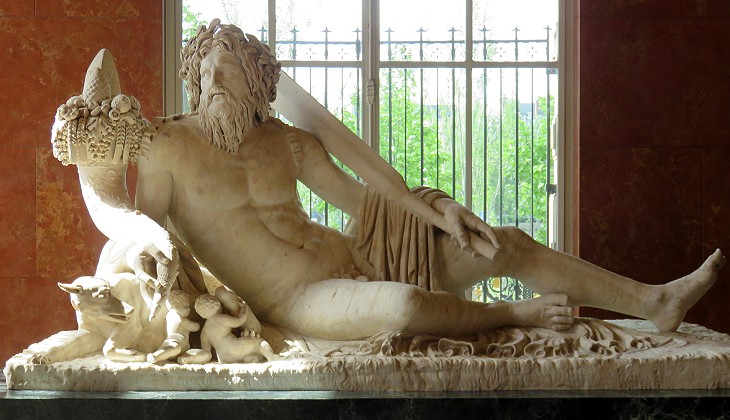 Louvre Museum in Paris: statue of the River Tiber from Iseo Campense. It was seized from the Vatican Museums by Napoleon, but eventually Pope Pius VII agreed to donate it to King Louis XVIII of France

The statue of the Tiber most likely stood opposite one depicting the Nile which has the same size.
The statues of the two rivers represented a sort of alliance between Rome and Egypt. The Roman religion was very much based on religio loci (religious sanctity of a wood, mountain, river, etc.) and thus the Romans built gigantic statues depicting river gods (you may wish to see those at Palazzo Senatorio and Marforio). These statues provided Gian Lorenzo Bernini with a pattern for Fontana dei Quattro Fiumi, in particular for the statue of the River Ganges. 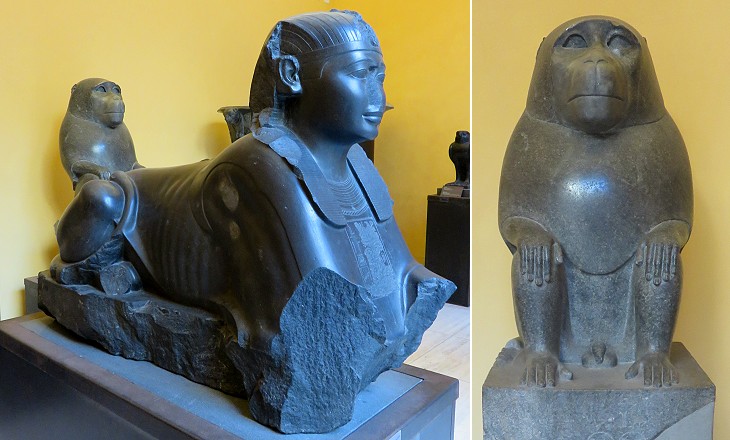 Invenit eadem Aegyptus in Aethiopia quem vocant basaniten, ferrei coloris atque duritiae, unde et nomen ei dedit. (The Egyptians also discovered in Ethiopia what is called "basanites", a stone which in colour and hardness resembles iron). Pliny the Elder - Historia Naturalis - Book XXXVI.
The Romans wanted their "Egyptian" statues to be made with a stone which was quarried in that country (see the Egyptian statues which decorated Villa Adriana). Occasionally they used dark stones for other subjects, but they were unhappy with the results. 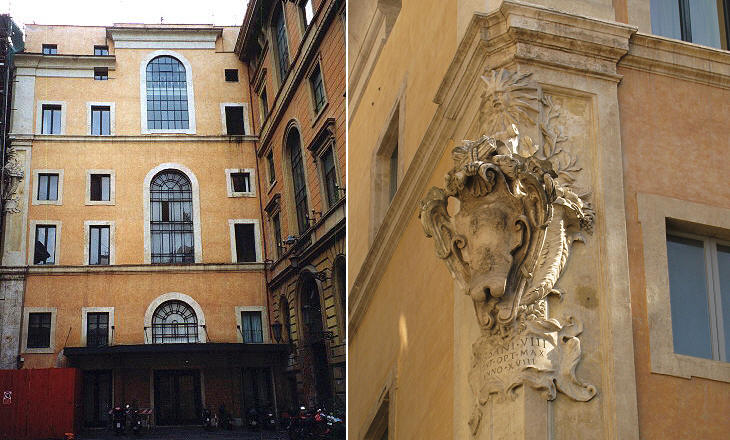 (left) A section of Monastero Domenicano della Minerva; (right) coat of arms of Pope Urban VIII and the Sun of the Barberini above it 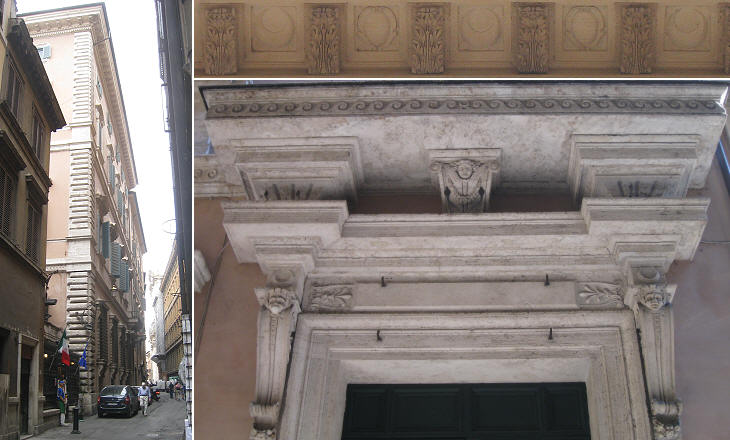 The palace was built in 1585 by Giacomo Della Porta for the Crescenzi. In 1768 it was inherited by Francesco Serlupi who added Crescenzi to his surname. The Crescenzi were a most powerful family in the XIth century when they could greatly influence papal elections.

Palazzo Serlupi Crescenzi: (left) courtyard; (centre) detail of the steps; (right) coat of arms on the first floor with a wolf (It. lupo) above the heraldic symbols, because the Serlupi claim to descend from the Lupi, a medieval noble family of north-western Italy

The palace is decorated with the crescent moon of the Crescenzi, but the heraldic symbol of the Serlupi appears in later additions, such as the richly decorated coat of arms shown above. The Serlupi had a palace in Piazza di S. Maria in Campitelli. They inherited large estates near Corneto (Tarquinia) which they sold in 1812, during the French Annexation of Rome. 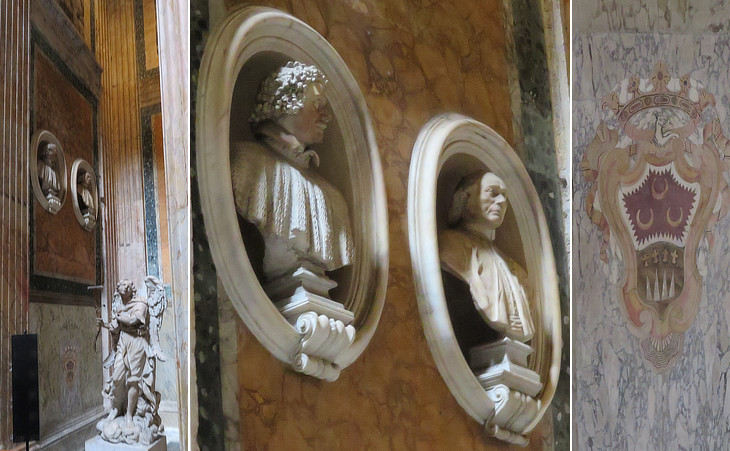 (left) Cappella Serlupi at the Pantheon; (centre) busts of members of the family; (right) coat of arms

The Serlupi had family chapels at the Pantheon, S. Maria in Aracoeli and S. Maria in Campitelli. Madonnelle (sacred images): (left-above) at Palazzo Serlupi; (left-below) enlargement of the frame showing the heraldic symbols of the Serlupi (fleurs-de-lis) and of the Crescenzi (crescents); (centre) in Via delle Paste; (right) in Via degli Orfani

The image used as background for this page shows a detail of the "madonnella" at Palazzo Serlupi. 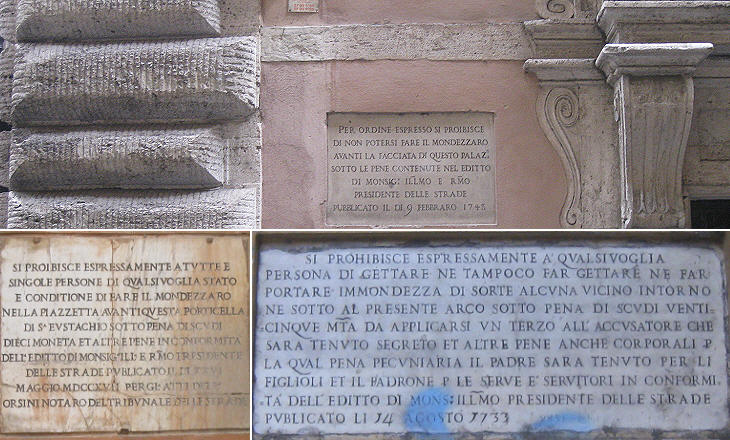 Palazzo Serlupi has an inscription forbidding "il mondezzaro" (the accumulation of garbage) below the windows of the building. The papal government was worried about the appearance and the cleanliness of the streets of Rome and many decrees were issued in the XVIIth and XVIIIth centuries; they established responsibilities, fines and corporal punishment.
Most of the inscriptions were placed during the pontificate of Pope Benedict XIV (1740-1758). He was known for walking incognito outside the papal palaces to get first-hand knowledge of what was going on in town; his repeated attempts to improve the cleanliness of the streets, show that he was not happy with what he saw.