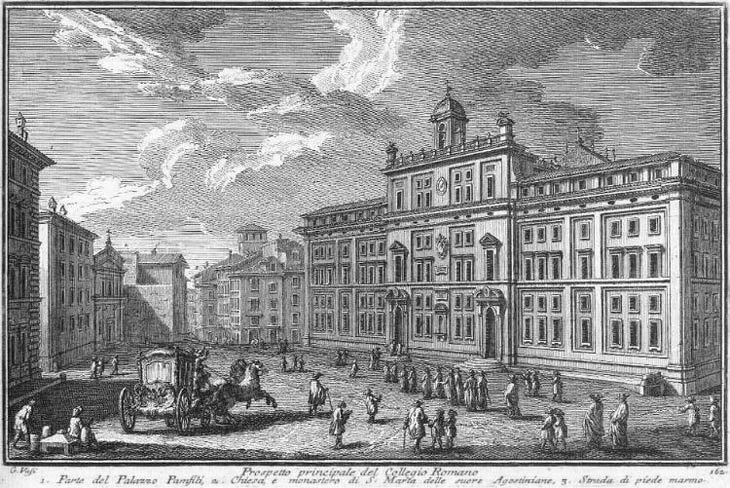 In 1754 Giuseppe Vasi showed this square in a plate covering Palazzo Pamphilj. In that plate the square was empty apart from a luxury carriage. In 1759, when he depicted Collegio Romano, which housed the largest public school of Rome, he showed a procession of pupils heading towards the entrance; they wore tricornes which were very popular at the time, because they provided protection from sun and rain.
In the plate Vasi showed the tip of the façade of S. Ignazio, a large church behind Collegio Romano; the tip of the façade cannot be seen from this square, but perhaps Vasi's aim was to highlight that the church did not have a dome. The two buildings belonged to the Jesuits, who also had a seminary a few yards away.
The view is taken from the green dot in the 1748 map below. In the description below the plate Vasi made reference to: 1) Part of Palazzo Pamphilj; 2) S. Marta; 3) Street leading to Piè di Marmo (and S. Maria sopra Minerva). 1) is shown in another page. The map shows also 4) Collegio Romano; 5) S. Stefano del Cacco; 6) Palazzo Frangipane. The only change to the square, apart from the too many parked cars, is the enlargement of the street leading to Piè di Marmo; in 1852 part of the Augustinian nunnery adjoining S. Marta was pulled down and replaced by a smaller building designed by Luigi Poletti. 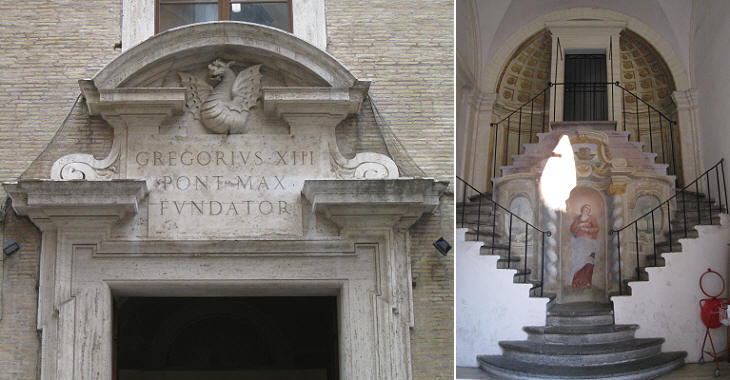 (left) Side portal in Via del Collegio Romano; (right) detail of the interior

The Counter-Reformation effort needed support from a theological/cultural viewpoint and the Society of Jesus, the order founded by St. Ignatius of Loyola, provided it through a series of educational institutions in all Catholic countries. In Rome the Jesuit schools were housed in Collegio Romano, a large building, the construction of which was promoted and completed by Pope Gregory XIII in 1582-1583. The heraldic symbol of the Pope was a dragon and this explains why dragons were placed in so many parts of the building. Many future popes and cardinals studied here, but the schools were not reserved only to those who embraced the ecclesiastical career. 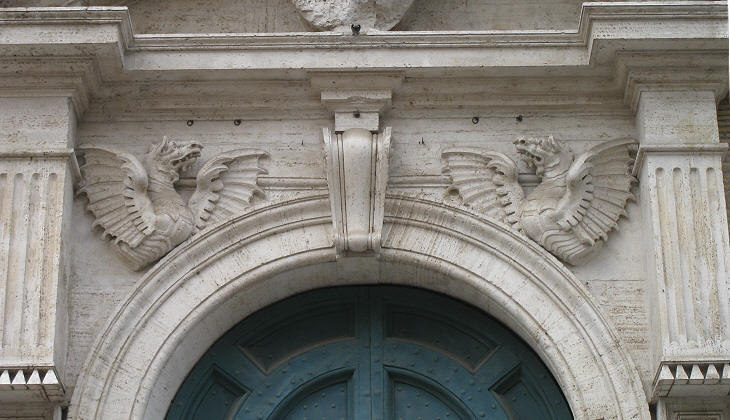 23rd November 1644. I went to the Jesuits' College again, the front whereof gives place to few for its architecture, most of its ornaments being of rich marble.
John Evelyn's Diary and Correspondence
For some time the design of Collegio Romano was attributed to Bartolomeo Ammannati, but it is now generally believed that the building was designed by Giuseppe Valeriani, a Jesuit brother. Whoever the architect, he had to deal with the unusual shape of the area chosen for the building (a trapezium); of the two portals, only one was actually needed (it leads to the large courtyard around which the palace is structured); the other one had only an aesthetic purpose. 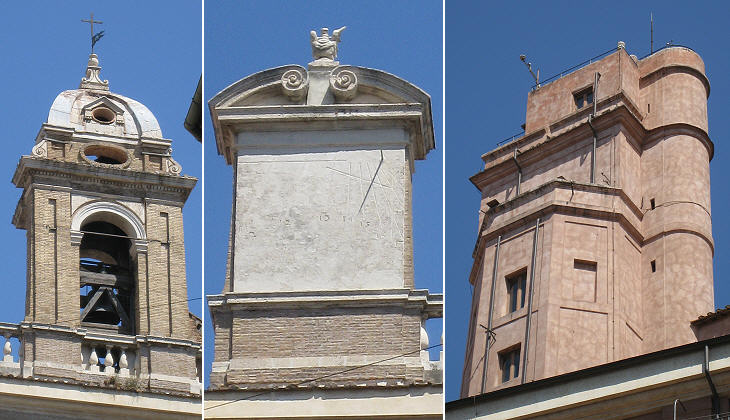 Pope Gregory XIII is known for the reformation of the calendar which established that the years at the end of the centuries are leap-years only if they can be divided by 4. So the year 20(00) was a leap-year, but the year 19(00) was not a leap-year. The commission which recommended the adoption of the new calendar was headed by Christopher Clavius, a Jesuit professor of astronomy and mathematics at Collegio Romano. The astronomers made their observations of the sky from Torre dei Venti in Palazzo del Belvedere. In 1787 a turret was built on the roof of the building to serve as the astronomical observatory, but in 1852 for stability reasons the observatory was placed exactly above the missing dome of S. Ignazio (you may wish to see it in another window). 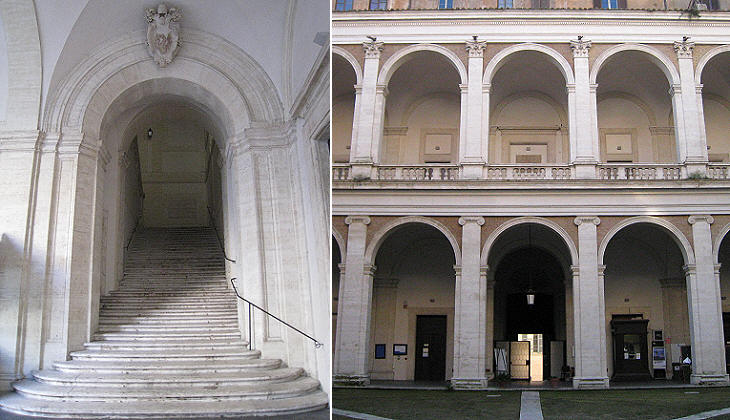 (left) Steps leading to the loggia; (right) part of the courtyard

It has within a noble portico and court, sustained by stately columns, as is the corridor over the portico, at the sides of which are the schools for arts and sciences, which are here taught as at the University. Evelyn
After the 1870 conquest of Rome by the Kingdom of Italy, the building was confiscated and in 1871 Liceo Ennio Quirino Visconti, one of the best state-funded high schools of Rome, was established in its premises. The choice to dedicate the school to Ennio Quirino Visconti was not without political significance. Visconti (1751-1818), a former student of Collegio Romano, was an antiquarian and art historian. He wrote a most comprehensive catalogue of the ancient works of art at Musei Vaticani and he was the curator of Musei Capitolini. In 1798 the French appointed him one of the five consuls who formed the government of the Roman Republic. At the end of 1799 Rome was occupied by Neapolitan troops and Visconti fled to Paris, where he held important positions at the Louvre, was appointed Chevalier of the Légion d'honneur and where he remained until his death. 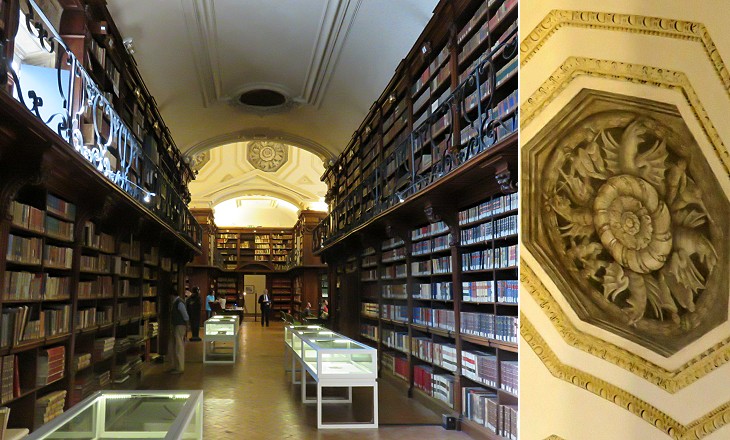 There are two noble libraries, where I was showed that famous wit and historian, Famianus Strada. Evelyn
Collegio Romano had a library of some 50,000 volumes which in 1876 were moved to the National Central Library. Today its premises house the Ministry of Cultural Heritage and Activities and Tourism which has a library of Archaeology and History of Art.
In 1927-1930 the Holy See built Pontificia Università Gregoriana which is the heir of Collegio Romano from a religious viewpoint because the majority of the professors are of the Jesuit order (it is situated a short distance from Collegio Romano). 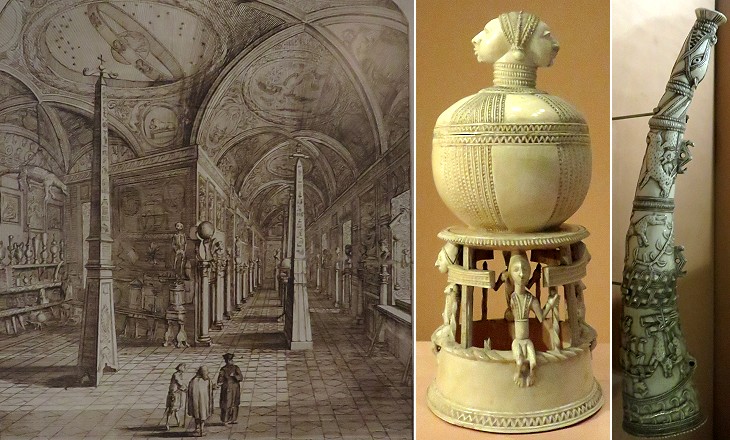 On the 8th November 1644: Father Kircher (professor of Mathematics and the oriental tongues) showed us many singular courtesies, leading us into their refectory, dispensatory, laboratory, gardens, and finally (through a hall hung round with pictures of such of their order as had been executed for their pragmatical and busy adventures) into his own study, where, with Dutch patience, he showed us his perpetual motions, catoptrics, magnetical experiments, models, and a thousand other crotchets and devices, most of them since published by himself. Evelyn
We pass into a room containing various ornaments in glass, ivory, and metal, belonging to various nations even of Asia and America. Another room contains ancient Egyptian objects in bronze, terracotta and marble. Finally a second gallery is appropriated to minerals and fossils, some of considerable interest.
Rev. Jeremiah Donovan - Rome Ancient and Modern - 1843 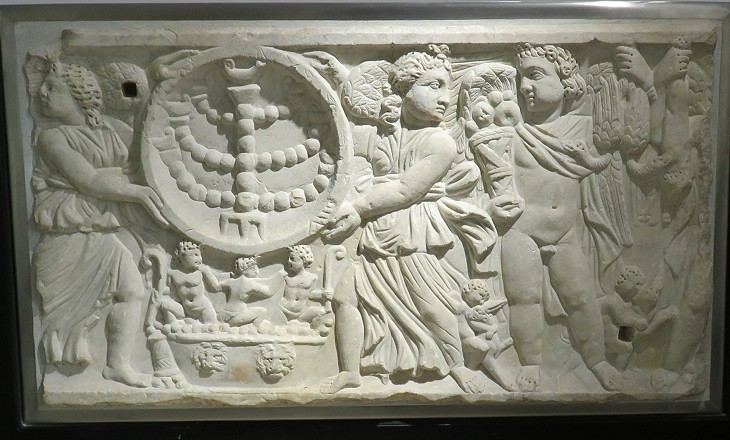 Athanasius Kircher (1602-1680) had a wide range of interests and wrote some forty treatises on a variety of subjects, including the (erroneous) decipherment of the hieroglyphs of the obelisk at S. Giovanni in Laterano. He gathered an unusual collection of "curiosities" at Collegio Romano which reflected his interests. In 1876-1915 the exhibits of Museo Kircheriano were moved to other museums which were more suited to house them. Museo Nazionale Romano - other exhibits from Museo Kircheriano: (left) cinerary urn without inscription depicting the Rape of Proserpina (IInd century AD); (right) detail of a IVth century AD sarcophagus of a boy depicting a fight between cocks (see a mosaic from Pompeii)

The Kircherian Museum consists of six rooms, the first of which contains a collection of sepulchral urns and tombstones, arranged in (the) form of a columbarium. The second room is a small vestibule containing a collection of ancient primitive Italian monies, the most copious that exists. A flight of steps leads up to the hall of the bronzes, containing a collection of various utensils, weights, measures, keys, lamps, candelabra, arms and armour, missile balls, animals, scenic masks, etc. Donovan 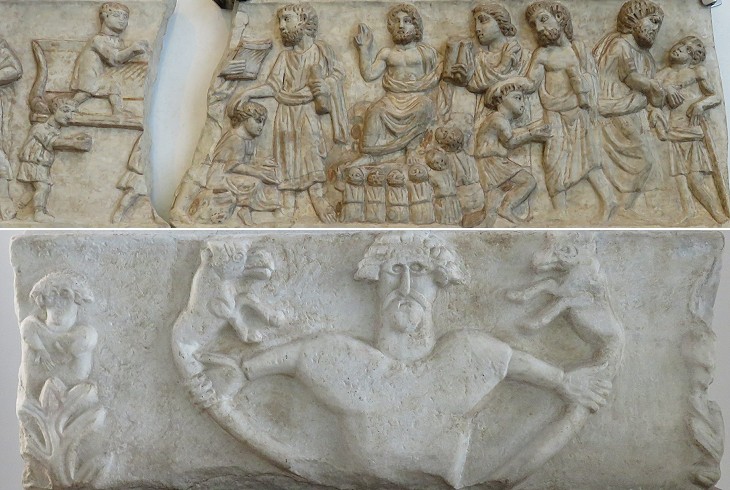 Other exhibits from Museo Kircheriano: (above) Museo Nazionale Romano: Early Christian sarcophagus, where Jesus is depicted in a typical Roman attire; (below) Museo dell'Alto Medioevo: Xth century relief depicting the Ascension of Alexander the Great 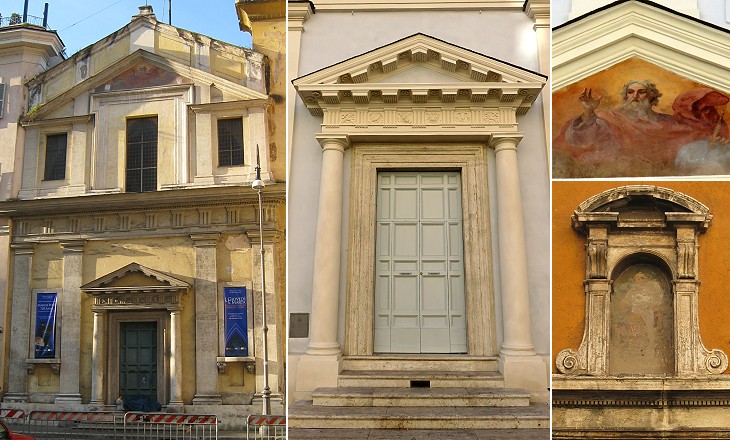 (left) Façade (before being repainted); (centre) portal; (right-above) fresco at the top of the façade; (right-below) detail of the entrance to the nunnery

S. Marta was built in the second half of the XVIIth century as part of an Augustinian nunnery; it was designed by Carlo Fontana. In 1872 it was confiscated and used for several different purposes; niches were replaced by windows and the portal was removed; in the 1960s the portal was reconstructed and the building is now used for small exhibitions.
Today the nunnery houses a police station which has jurisdiction over an area which is very critical because it includes Palazzo Chigi, the residence of the Prime Minister, and Palazzo di Montecitorio/Palazzo Madama, the Houses of Parliament. The writer of this page remembers being roughly questioned there after having voiced his views. 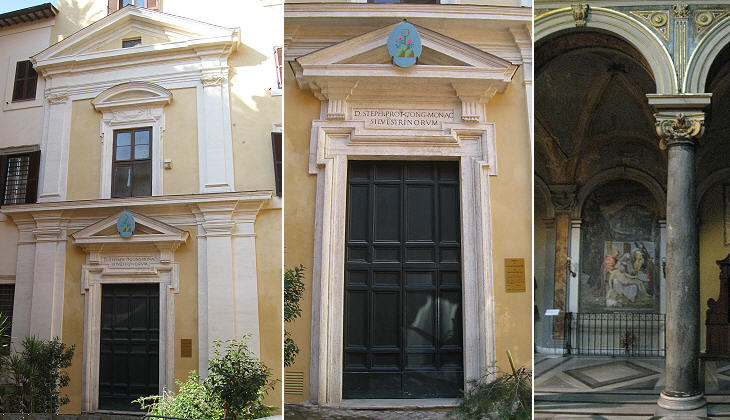 (left/centre) Façade ; (right) one of the ancient columns in the interior of the church

The Church of St. Stephen of de Cacco. The Name deriv'd from two Lion's of the black Marble called Basaltes brought from Numidia which in my Memory stood before the said Church but in the Days of Pope Pius IV' they were carry'd to the Capitol and plac'd as an Ornament at the Foot of the winding Stairs that lead to the Street of the Capitol. A few Years since, as they were digging under the Church, they came upon a Part of the ancient Temple, whose Columns of yellow Marble were still standing but as they were moving them they fell in Pieces, having been long before impair'd by Fire. Here were also found certain Pedestals or Altars formerly us'd by the Gentils, and on them were carv'd Rams, with certain Ornaments about their Necks, as was the Custom of the Heathens. (..) Nor is it to be question'd but that there are many Monuments of Antiquity bury'd under this Church, which are lost for fear of pulling it down.
Flaminius Vacca's 1594 account of discoveries of antiquities which took place in his lifetime, as quoted in "The Travels of the Learned Father Montfaucon from Paris thro' Italy - 1712"
S. Stefano del Cacco is located on the site of a Temple to Isis and Serapis which was initially built during the second triumvirate; it was surrounded by obelisks and it was decorated with statues; the complex was known as Iseo Campense; the "cat" of Palazzo Grazioli and the statue known as Madama Lucrezia come from this complex, as well as six small obelisks.
The reference to Cacco is generally thought to derive from a broken statue of an Egyptian deity which was thought to represent a macaque. Eventually some very fine statues including that of a monkey were found in the area and moved to museums.
In 1563 Pope Pius IV assigned S. Stefano del Cacco to the Silvestrini, a branch of the Benedictine order, who greatly modified the church, which had a small porch and an apse decorated with mosaics; the Silvestrini built a monastery on the back of the church. 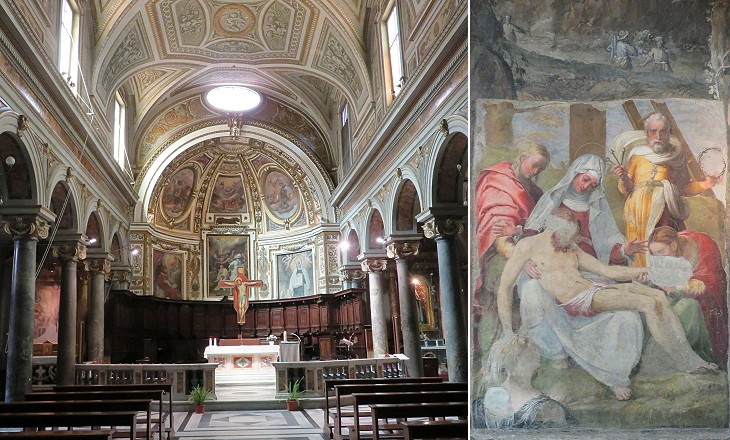 (left) Interior; (right) fresco by Perin del Vaga (early XVIth century) depicting a Deposition which brings to mind the statue by Michelangelo; see his paintings in the Papal Apartments at Castel Sant'Angelo Piè di Marmo (Marble Foot) is the name given to a marble fragment depicting the left foot of a goddess. At Vasi's time it was placed in the street by the same name; in 1878 it was moved to the beginning of the side street leading to S. Stefano del Cacco.
A small and somewhat hidden square in the nearby street leading to il Gesù is embellished by the late XVIth century portal of Palazzo Frangipane. The Frangipane family played an important role in Rome from the XIIth to the XIVth century. They had turned the Colosseo into a fortress, but in the XVIth century their influence and wealth were greatly reduced. They had their family chapel in nearby S. Marcello al Corso.