S. Maria in Via Lata
(Vasi at work in the Grand View of Rome) 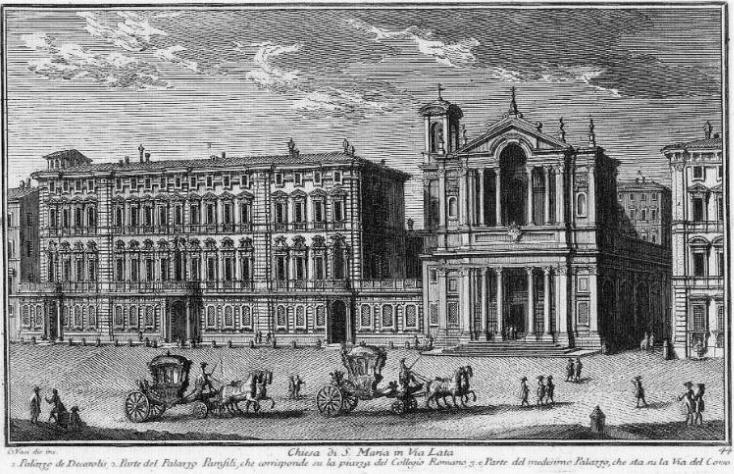 Originally Via del Corso was the urban section of Via Flaminia, a Roman road which linked the City to Ariminum (Rimini). Because of its relative width, its southern part from Piazza Venezia to S. Marcello was also known as Via Lata (wide), similar to other main streets in Italian cities (e.g. Via Larga in Florence and Milan). Giuseppe Vasi however greatly enlarged Via Lata in this 1753 etching in order to show all the architectural details of the church and of the adjoining palace. Vasi regarded himself as an architect, rather than a painter, and this plate brings to mind a technical drawing.
The view is taken from the green dot in the 1748 map below. In the description below the plate Vasi made reference to: 1) Palazzo De Carolis; 2) Palazzo Pamphilj al Collegio Romano; 3) Palazzo Pamphilj in Via del Corso. 2) is covered in another page. The small 1748 map shows also 4) S. Maria in Via Lata. The dotted line delineates the border between Rione Pigna (west of Via del Corso) and Rione Trevi (east of Via del Corso). This side of Via del Corso is unchanged, but the width of the street does not allow showing its monuments as Vasi did in the plate (and passers-by do not notice their fine design). 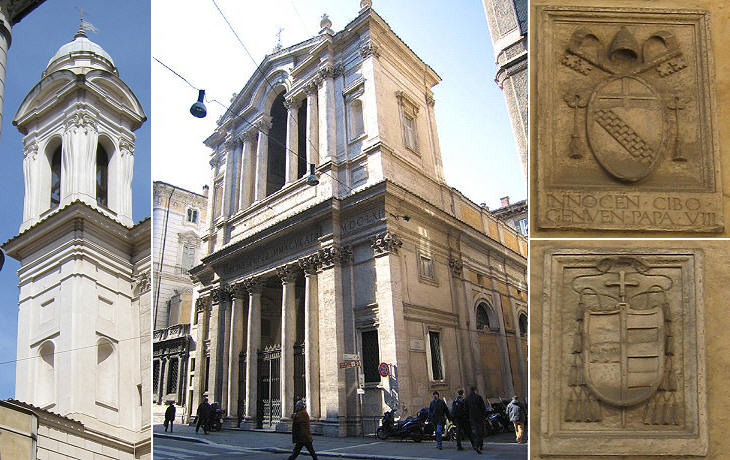 S. Maria in Via Lata is a very old church which was built making use of an ancient Roman portico; in the XIth century, because of the rise of the level of the ground, a new church was built above the old one, similar to what occurred at S. Grisogono and at S. Clemente. It was restored in the late XVth century at the initiative of Cardinal Rodrigo Borgia and Pope Innocent VIII whose coats of arms can be seen on the side wall. 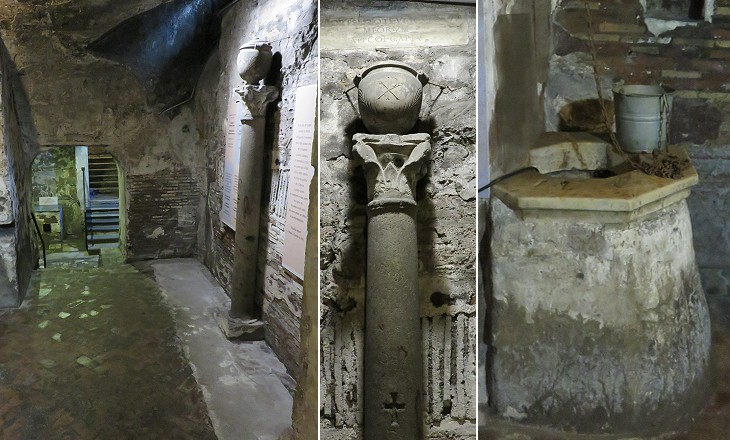 In 1658 Pietro da Cortona was asked to build a new façade by Pope Alexander VII and in 1661 the architect discovered the remains of the underground church. He turned it into a small oratory which has been closed for a very long time. According to tradition the underground church incorporated a building where St. Paul the Apostle spent two years in forced detention in his house while he waited for his trial. 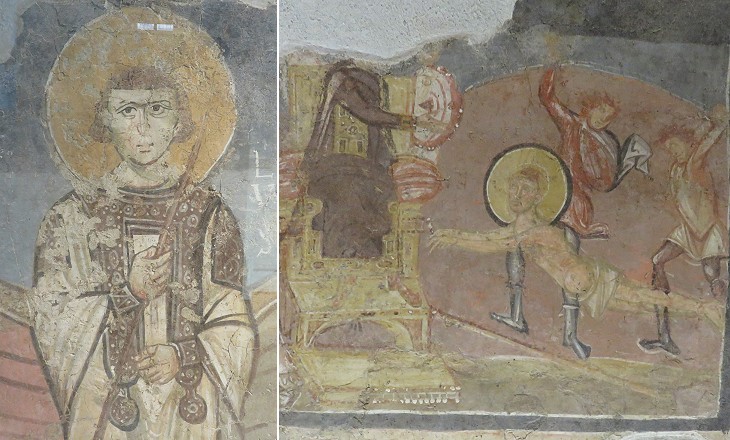 The walls of the underground church were almost entirely covered with frescoes, although only some fragments did not disappear due to humidity. When they were removed to ensure their conservation an older layer of paint was found and beneath it another one. They are dated VIIth/VIIIth century and they show that during that period frescoes were an alternative to mosaics for the decoration of Roman churches, e.g. S. Maria Antiqua was a church decorated with frescoes and S. Lorenzo fuori le mura with mosaics. The latter have proved to better withstand the ravages of time than frescoes. 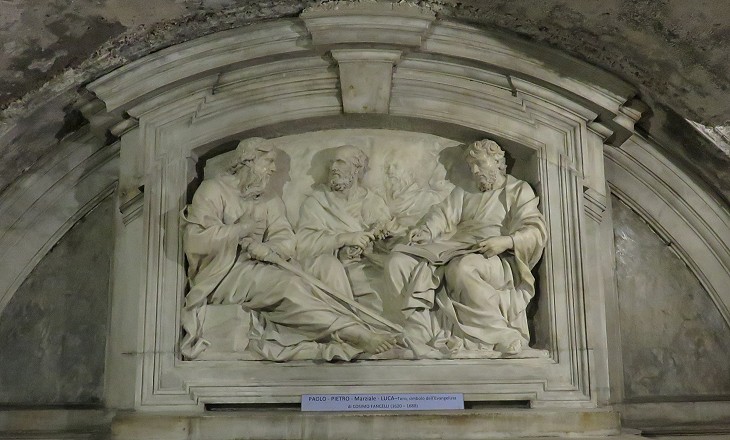 Relief by Cosimo Fancelli portraying (left to right) Sts. Paul (with the sword), Peter (with the keys) and Luke (in the act of writing his gospel) in the underground church

Pietro da Cortona designed some chapels in the underground church. According to tradition the ancient building had been used by St. Luke and St. Peter. They were portrayed together with St. Paul in a fine relief by Cosimo Fancelli. The three Apostles are clearly visible, but between Peter and Luke there is a human head. It belongs to St. Martial, a disciple of St. Peter who owned the building. The head of the bull is a reference to St. Luke.

The loggia of the façade

The new façade by Pietro da Cortona is made up of a portico and a loggia; unlike many other baroque façades it does not have a curved shape and its serliana (a sort of triumphal arch) recalls ancient Roman patterns (see an example at Ephesus) which became very popular during the XVIth century. The façade was decorated with the coat of arms and the heraldic symbols of Pope Alexander VII which you can see in a page covering this topic. 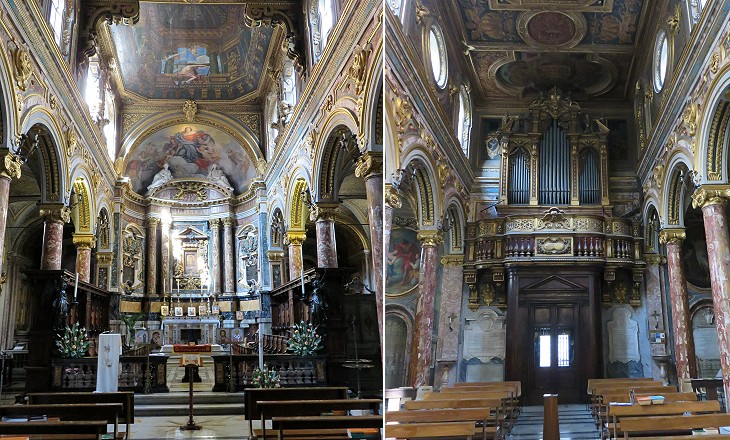 Pietro da Cortona was not involved in the redesign of the interior of the church, because this had been done in 1650 by Cosimo Fanzago (1591-1678), the leading architect in Naples. The church had ancient cipollino columns separating the main nave from the small ones; Fanzago covered them with diaspro siciliano, a very precious reddish stone. Other marble and gold decorations made the interior very colourful and S. Maria in Via Lata became one of the churches of Rome which most strike the visitor because of their lavish decoration (S. Maria della Vittoria and S. Caterina a Magnanapoli are other small churches renowned for this reason). You may wish to see a page on the use of colour in the churches of Rome. 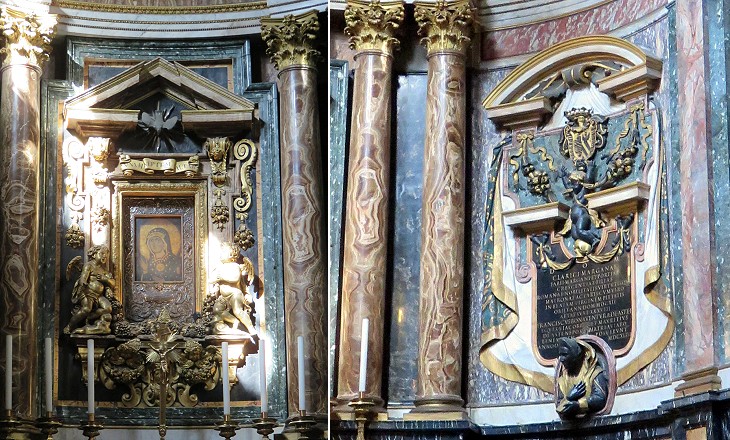 Giovanni Battista d'Aste was a wealthy banker from Albenga, near Genoa. He came to Rome in the early XVIIth century and according to Theodore Amayden, the author of a widely known treatise on the Roman noble families, he increased his fortune incredibilmente traficando in the Papal Court. The d'Aste eventually built a palace very near S. Maria in Via Lata.
Francesco d'Aste, son of Giovanni Battista, agreed to bear the cost of the redesign of the apse as long as he could place the funerary monuments of his parents at the sides of a sacred image of the Virgin Mary. In 1634-1643 Gian Lorenzo Bernini superintended the construction of the new apse and of the funerary monuments which were executed by members of his inner circle. More than twenty different marbles were used for the decoration of the apse. 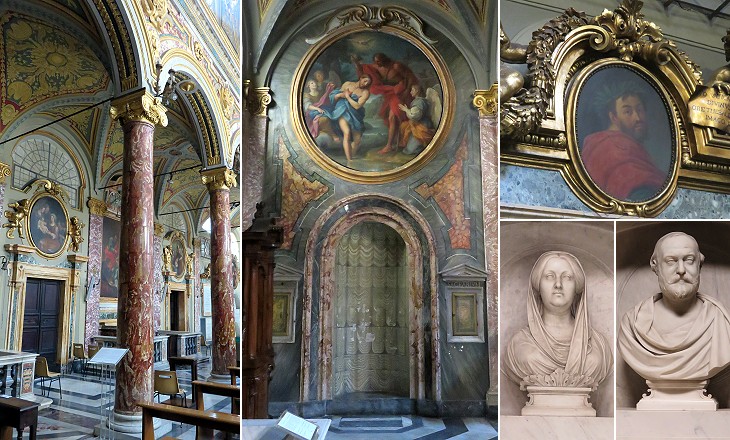 (left/centre) Other details of the interior; (right-above) XVIIIth century funerary monument to the poet Antonio Tebaldi (aka il Tebaldeo - d. 1537) based on his assumed portrait in "The Parnassus" (it opens in another window) at Stanze di Raffaello; (right-below) busts of Zenaide Bonaparte and her son Joseph (in the XIXth century the Bonaparte lived at Palazzo d'Aste) 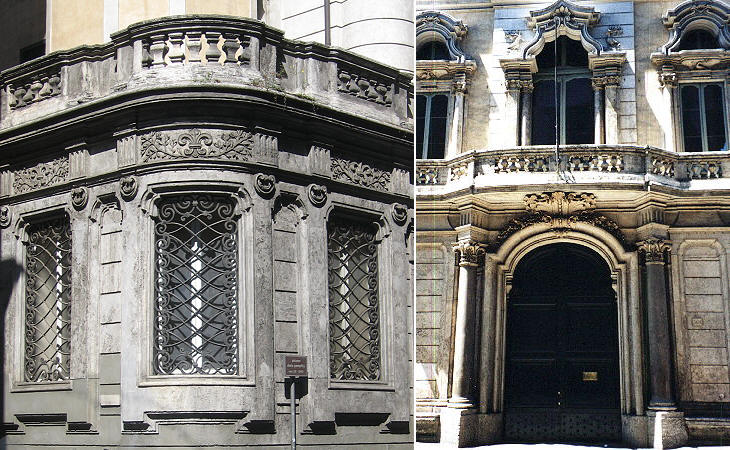 The Palace is made up of three buildings. The façade of that on Via del Corso was designed by Gabriele Valvassori in 1734. It is very innovative and today it is regarded as the finest example of Late Baroque in Rome, but initially and until the end of the XIXth century it was much criticized. The heraldic symbols of the Doria Pamphilj (fleurs-de-lys and doves holding an olive branch) provide the motifs for its decoration (a dove is portrayed in the image used as background for this page). See more of this palace in Where the Dove Flies and a monastery in Malta which was built on the basis of a project by Valvassori. 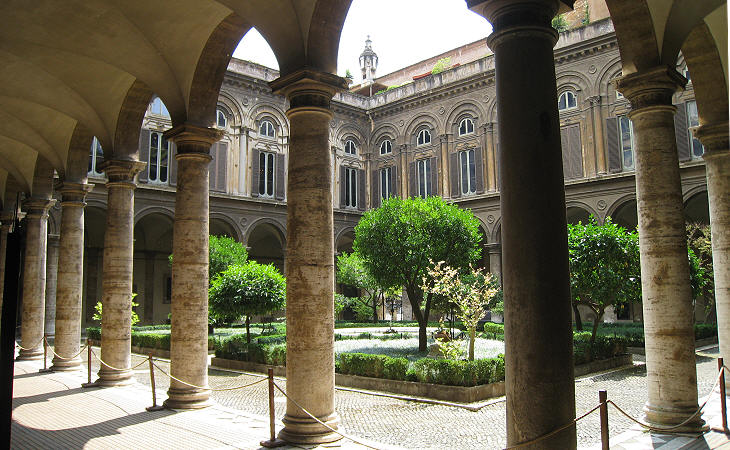 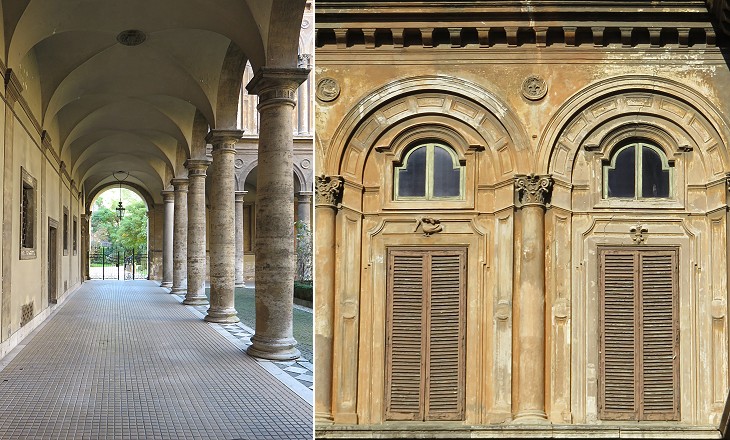 (left) Portico of the courtyard; (right) windows of the upper storey which houses the Hall of Mirrors of Galleria Doria Pamphilj 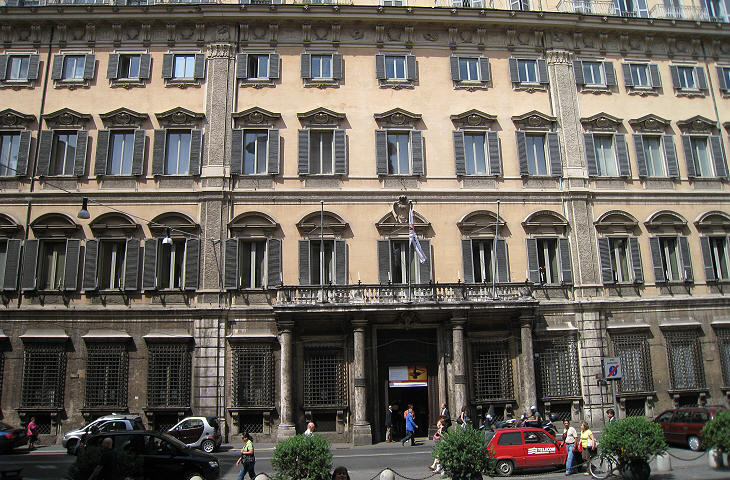 In his 1761 itinerary Vasi wrote about this palace: Questo fu eretto ... dalla famiglia di Carolis, che si estinse nel suo nascere. "It was built by the De Carolis, who were extinct in their early days". Livio De Carolis, a commoner who made a fortune in the trade of grains, bought a small fiefdom (Prossedi, near Priverno) which granted him a title of nobility and he commissioned Alessandro Specchi to build an imposing palace on the site of a series of small houses along Via del Corso. The palace was completed in 1728, but after the death of Livio De Carolis in 1733, his heirs were unable to maintain it and by 1750 they sold it together with the fiefdom. 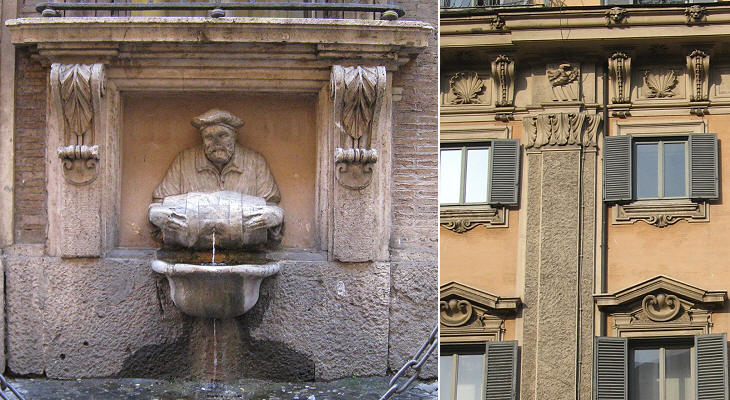 In 1833 the palace was bought by Prince Luigi Boncompagni Ludovisi who added his heraldic symbols on the cornice; his family had two popes: Pope Gregory XIII Boncompagni and Pope Gregory XV Ludovisi.
The plate by Vasi shows a small fountain located below one of the windows of Palazzo De Carolis: it is called Il Facchino (the porter) and it represents a seller of mineral water; it was probably built by the related guild in the late XVIth century. It was one of the Talking Statues of Rome. In 1872 it was relocated in the street between the palace and S. Maria in Via Lata.