You may wish to see an introductory page to this section or a page on the monuments of Gaeta which attracted the attention of the Grand Tour travellers first. 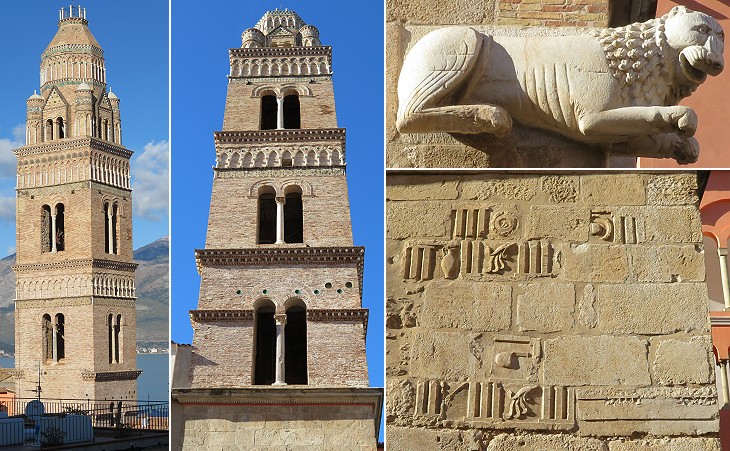 (left/centre) Bell tower of the Cathedral; (right-above) medieval lion above the rear portal which is nested inside the bell tower; (right-below) friezes and other building materials from Mausoleo Atratino which were employed in the construction of the bell tower

I measured back my steps (from La Trinità) two miles to the cathedral, which is dedicated to St. Erasmus: Frederic of Swabia adorned it with a steeple remarkably slender and lofty.
Henry Swinburne - Travels in the Two Sicilies. 1777-1780
The accounts of Grand Tour travellers did not pay much attention to medieval monuments and works of art, but Swinburne made an exception for the very tall bell tower of the Cathedral of Gaeta. The first three stories were built in 1148-1174 by Nicola di Angelo, a Roman sculptor who worked at the Easter Candelabrum of S. Paolo fuori le Mura with Pietro Vassalletto. 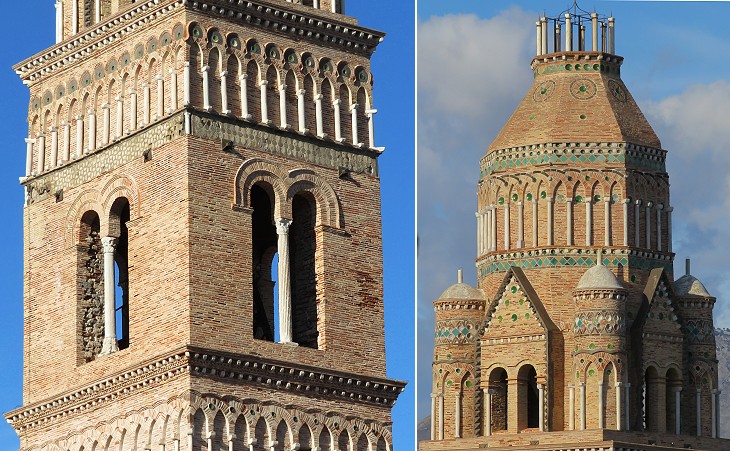 Middle (left) and top (right) sections of the bell tower; the photos were taken from the road to the fortresses

The top section was designed in 1279, perhaps after a previous one collapsed because of an earthquake in 1231. At that time Gaeta was part of the Kingdom of Sicily and this section of the bell tower brings to mind the Norman-Arab monuments of the island (e.g. the interlacing arches and the decorative use of many small columns in the Cathedral of Palermo). The bell tower had an influence on the design of that of the Cathedral of Terracina. 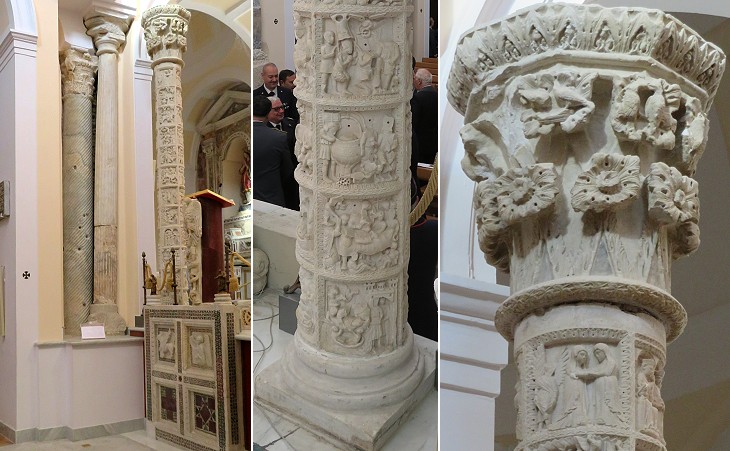 The Easter Candelabrum is dated late XIIIth century and its design did not follow the pattern of that of S. Paolo fuori le Mura. It rather built upon that of the Cathedral of Capua. They both were meant to resemble an ancient column, but this is more evident at Gaeta where the shaft of the Easter Candelabrum is not broken into sections. The location of the candelabrum changed many times because the interior of the church was repeatedly modified. 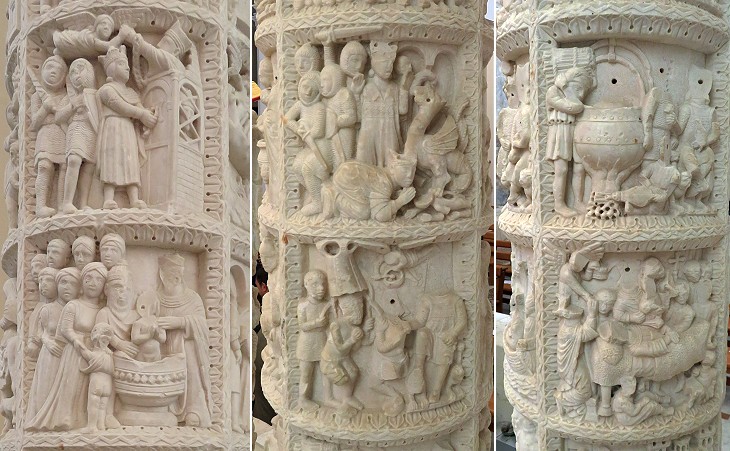 Easter Candelabrum: events from the life of St. Erasmus

Similar to what occurs on some bronze doors (e.g. at Monreale), the candelabrum was decorated with small framed reliefs. They depict scenes from the life of Jesus and of St. Erasmus of Formia. The relics of the saint were moved from a church in Castellone di Formia to Gaeta after a Saracen raid in 842. St. Erasmus, Bishop of Formiae, was executed in 303 during the persecution ordered by Emperor Diocletian. The traditional account of his miracles and sufferings includes episodes which are peculiar to the life of other saints: in the upper left relief St. Erasmus is freed from jail by an angel, similar to St. Peter. St. Erasmus is also known as St. Elmo, and, in addition to churches, also fortresses were dedicated to him, e.g. on Malta. 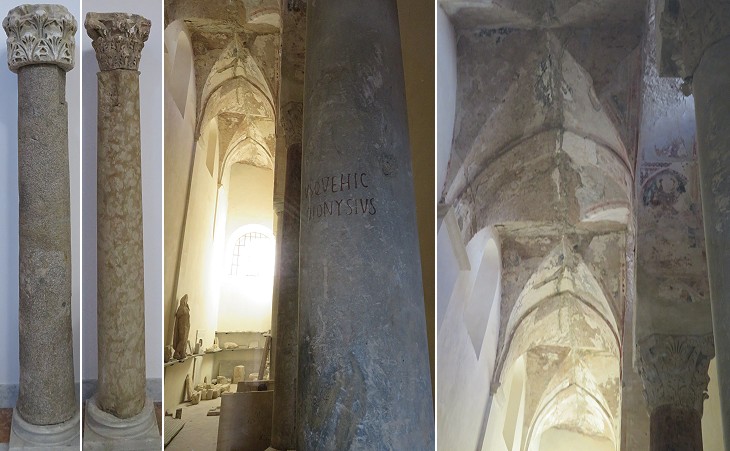 Its inside is supported by a variety of antique columns. Swinburne.
The original cathedral, which had seven aisles, was completed in 1106 and it was inaugurated by Pope Paschal II, a fact that shows the importance of the Archdiocese of Gaeta, which derived from that of Formia. In 1778 a redesign of the interior of the church reduced the number of aisles. Recent works allow the view of one of the old aisles with its medieval frescoes. 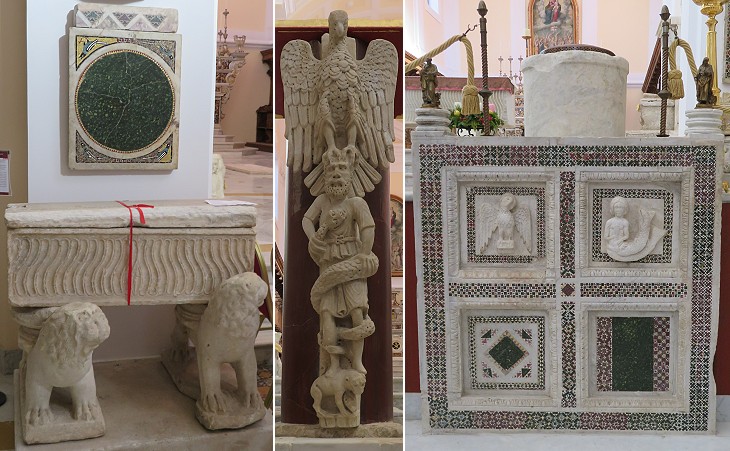 Cathedral: (left) ancient sarcophagus containing the remains of local saints; (centre) XIIth century puzzling decoration of a pulpit (see a pagan relief showing a man with the head of a lion in the coils of a snake); (right) part of a balustrade from the deconsecrated church of S. Lucia (Cosmati work - XIIIth century); the image used as background for this page shows a medieval lion in the portico

The 1778 redesign of the interior and the construction of a new façade in 1903 led to the relocation of medieval works to the portico or their storage in warehouses. Only in very recent years some of them were brought back inside the church, although not in their original position. The Archdiocese of Gaeta houses other Roman/medieval works of art in a small museum adjoining the Cathedral. 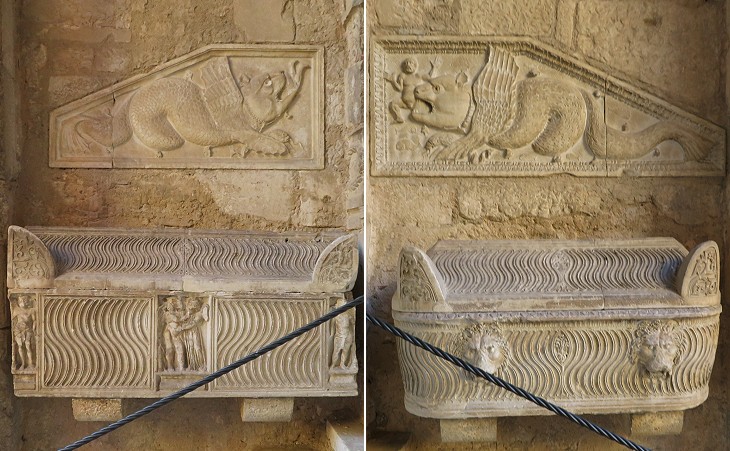 Rear entrance to the Cathedral across the bell tower: Roman sarcophagi and medieval reliefs depicting events of the life of Jonah (once in the interior of the church)

Now I apprehend that in the case of Jonah we have a fair proof of this divine power, when he comes forth from the fish's belly uninjured in both his natures - his flesh and his soul. No doubt the bowels of the whale would have had abundant time during three days for consuming and digesting Jonah's flesh, quite as effectually as a coffin, or a tomb, or the gradual decay of some quiet and concealed grave.
Tertullian - On the Resurrection of the Flesh - Chapter 32 - Jonah's Case Quoted in Illustration of God's Power - New Advent.
Depictions of Jonah and the whale were very frequent in floor mosaics of early Christian churches and sarcophagi. 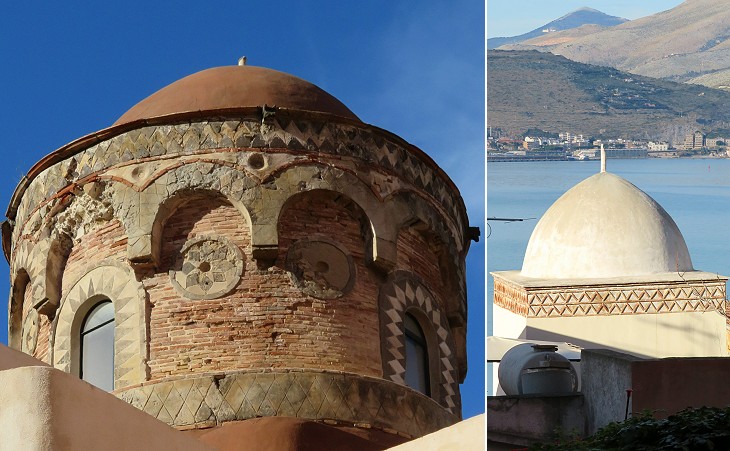 The influence of Sicilian architecture, e.g. SS. Annunziata dei Catalani at Messina, can be noticed also in some other medieval churches of Gaeta which were only partially redesigned in the following centuries. 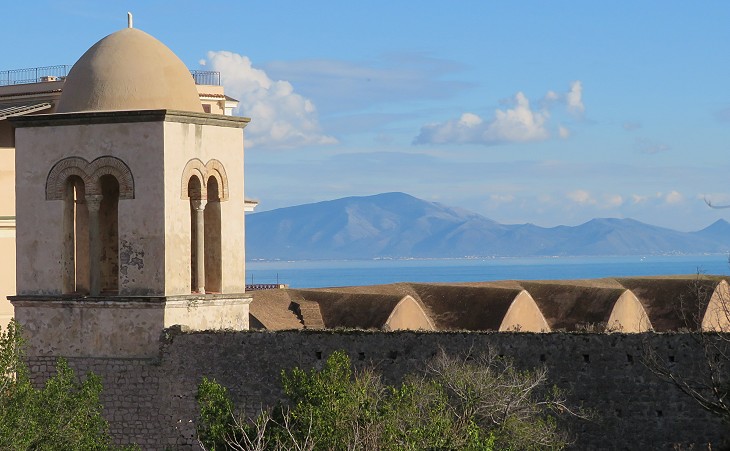 S. Domenico in the medieval quarter and behind it Mount Massico, south of "Minturnae"

The siege of Gaeta in 1860-1861 and allied bombings during WWII caused great damage to the medieval quarter of the town which stood between the Cathedral and the fortresses. This led to the move of most of its inhabitants to the neck of land between Monte Orlando and modern Formia which today is the real centre of the town. 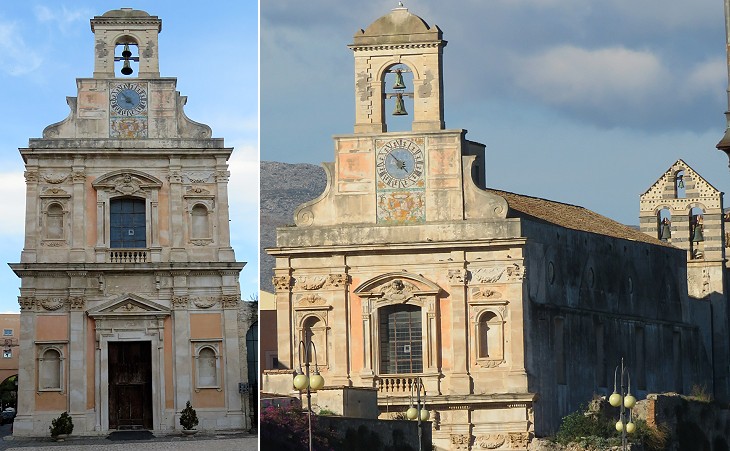 The façade of the church is a work by Andrea Lazzari from Naples. Other members of his family were involved in the overall redesign of the church which began in 1619 and lasted almost for the whole century. 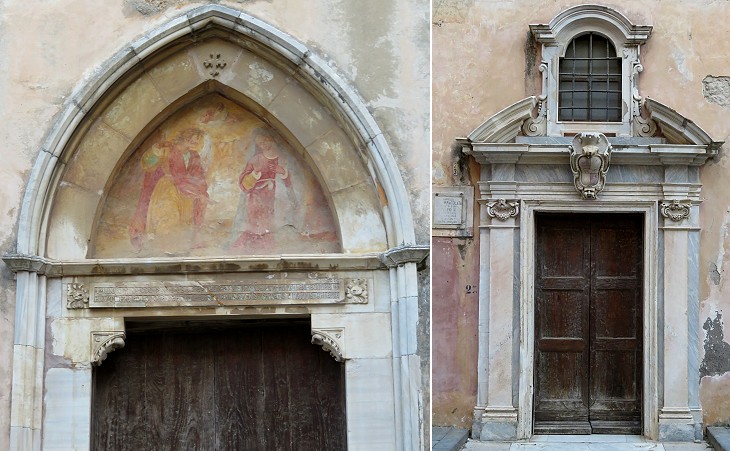 SS. Annunziata: (left) medieval side entrance with inscription stating that the church and an adjoining hospital were founded in 1320; (right) Cappella dell'Immacolata

Gaeta also afforded a retreat for two years to Pius IX, when he was forced to fly from Rome in November 1848.
Augustus J. C. Hare - Cities of Southern Italy and Sicily - 1891
Pope Pius IX fled Rome at the end of November 1848 and he chose to stay at Gaeta, rather than accepting the offer to move to Naples. He did so only in September 1849 after the French had put an end to Garibaldi's Defence of Rome. He stayed in the Royal Palace of Portici near Naples until April 1850. It is said that he developed his thoughts about the dogma of the Immaculate Conception of the Virgin Mary while praying in a chapel of SS. Annunziata. 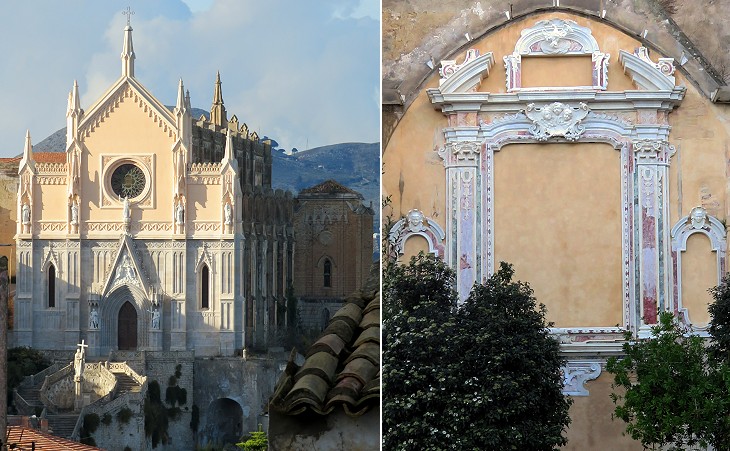 (left) S. Francesco, a medieval church which was entirely redesigned after 1850; (right) decoration of an altar of S. Biagio, a church which was demolished after having been bombed during WWII