- Monreale
(left) Temple to Hercules at Agrigento; (right) detail of the apse of Palermo's Cathedral (above) View from Monreale of Conca d'Oro, Palermo and Mount Catalfano; (below) enlargement showing the domes of S. Giuseppe dei Teatini and S. Caterina (left) and of Gesù (right)

The whole appears a magnificent garden filled with fruit trees of every species and watered by clear fountains and rivulets that form a variety of windings through this delightful plain. From the singularity of this situation, as well as from the richness of the soil, Palermo has had a great many flattering epithets bestowed upon it, particularly by the poets who have denominated it "Conca d'Oro" the Golden Shell, which is at once expressive both of its situation and richness. (..) The town and country round Monreale are greatly indebted to the liberality of Archbishop Testa; and in every corner exhibit marks of his munificence. (..) The valley at the foot of the mountain is rich and beautiful. It appears one continued orange garden for many miles, and exhibits an elegant piece of scenery; perfuming the air at the same time with the most delicious odours. We were so pleased with this little expedition, that notwithstanding the heat of the season, we could not keep in our carriage, but walked almost the whole of it.
Patrick Brydone - A Tour through Sicily and Malta in 1770.
Monreale, though a small place, is dignified with the title of an archiepiscopal city. It is built on the brow of a very high hill; lofty mountains hem it in on every side but the northern, on which a view opens over hanging woods of olive and orange trees to Palermo and the sea, a most extensive and noble scene.
Henry Swinburne - Travels in the Two Sicilies. 1777-1780 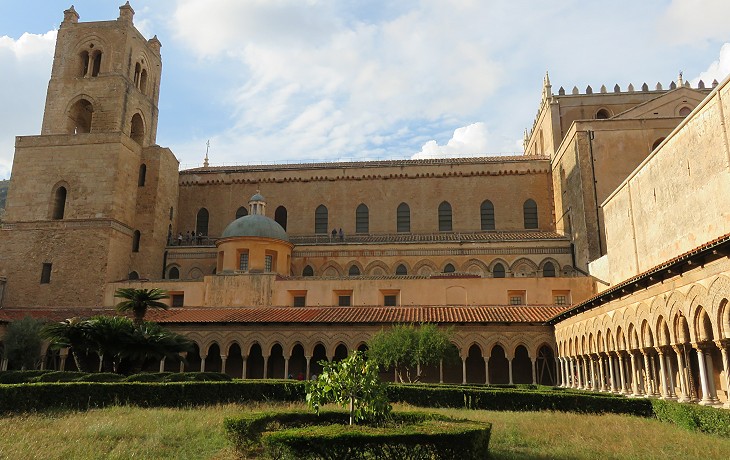 Cloister and southern side of the Cathedral of Monreale

That of Monreale (..) is the next in dignity in the island, after the cathedral of Palermo. It is nearly of the same size, and the whole is encrusted with mosaic, at an incredible expense. Brydone
Monreale, name of Mons Regalis (Royal Mountain). Hither, says the chronicler Romualdo di Salerno, in the year 1153 (..) King William II reared the great church and convent which were the crowning wonder of Sicilian architecture. The story goes that he was warned in a dream by the Virgin Mary to build a church in her honour on this spot, with a treasure which he should find there. Gravina (Domenico Benedetto Gravina, the author of a book about the Cathedral) suggests that he discovered a hoard hidden by his avaricious father. The work was begun in 1172, and in 1176, though the church was still unfinished, the first monks and the Abbot Theobald from the Benedictine abbey of La Cava were installed in the new convent.
Sir Thomas Graham Jackson - Gothic architecture in France, England, and Italy - 1915. The author (1835-1924) of this essay was one of the leading architects of his time. He extensively wrote about Byzantine, Romanesque and Gothic architecture. 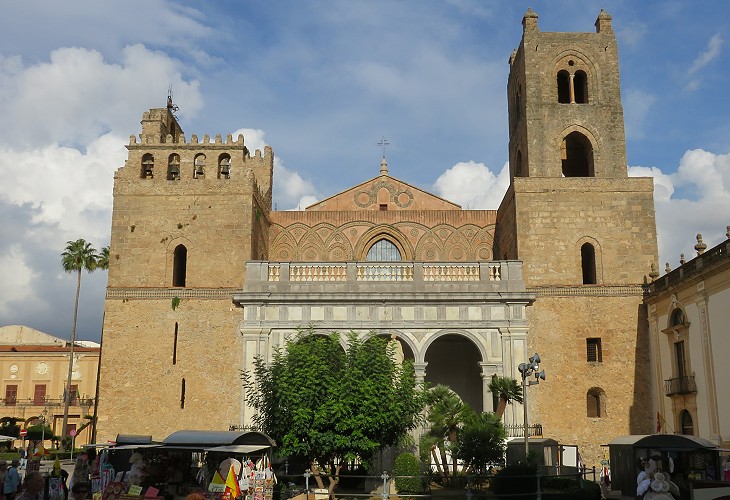 Façade of the Cathedral

The church is a basilica, transeptal, and ending in three apses, but there is no dome at the crossing. There are two western towers, standing, like those at Cefalu, in advance of the nave, with an open loggia filling the space between them, above and behind which appears the west wall of the nave, ornamented with interlacing arcading and with a large window. The south-west tower is finished with a rather later storey, and the other was never finished at all, but is semi-ruinous. The present loggia is of Renaissance work, replacing the original structure of pointed arches adorned with mosaic. T. G. Jackson 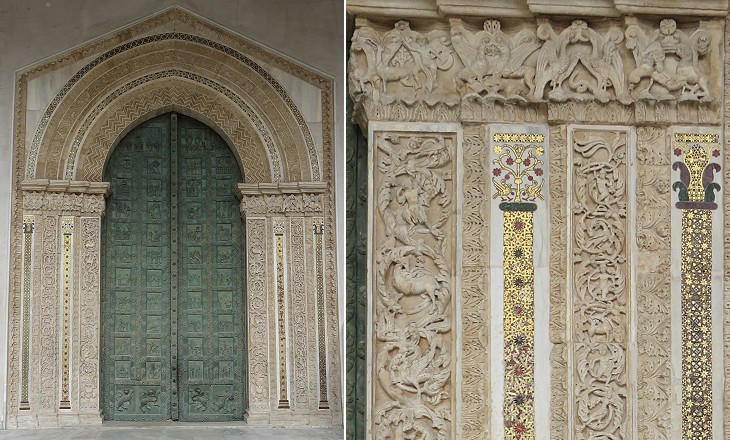 Cathedral: portal of the façade (a detail of its decoration is used as background for this page)

The western doorway is rather magnificent with Norman zigzag (aka chevron) and 12th century scroll-work, but the treatment is much flatter than it would be with us, the orders being very slightly retired within one another, and a border of mosaic is introduced among them. The bronze doors of Bonanno of Pisa, which were made in 1185, are extremely interesting. T. G. Jackson
From the very beginning, i.e. from this portal, the visitor realizes that the design and decoration of the Cathedral is the work of master masons, stonecutters and mosaic makers who had different artistic backgrounds. The simple zigzag moulding of this portal is typical of Norman architecture (see a similar one at Erice), whereas the elaborate design of the side panels recalls classical patterns with acanthus scrolls and mosaics depicting pilasters and capitals. 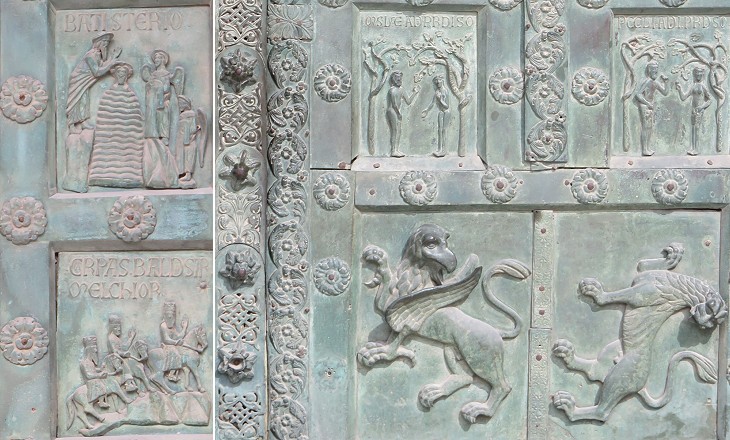 Cathedral: portal of the façade: details of the bronze panels depicting the Baptism of Jesus, Adam and Eve, the Fall of Man, the Three Magi, a gryphon and a lion

Borders of scrolls and rosettes divide them into panels. Four ramping lions occupy the foot, and the forty-six small panels above have figures of prophets and biblical groups, with their titles in Lombardic lettering. T. G. Jackson
A superb Bronze Door with a beautiful Door case reputed to be Saracenic forms one of the Entrances to the Church and is worthy of observation.
Mariana Starke - Travels in Europe for the Use of Travellers on the Continent and likewise in the Island of Sicily - 1838 Edition - based on a travel to Sicily made in 1834.
The bronze panels were made in Pisa and shipped to Monreale. The door is signed Bonanno civis pisanus; the sculptor is known also for a bronze door in the Cathedral of Pisa which he made before that of Monreale. The Maritime Republic of Pisa supported the Normans in their conquest of Sicily and afterwards in the establishment of a Norman kingdom at Mahdia and other ports of Tunisia. 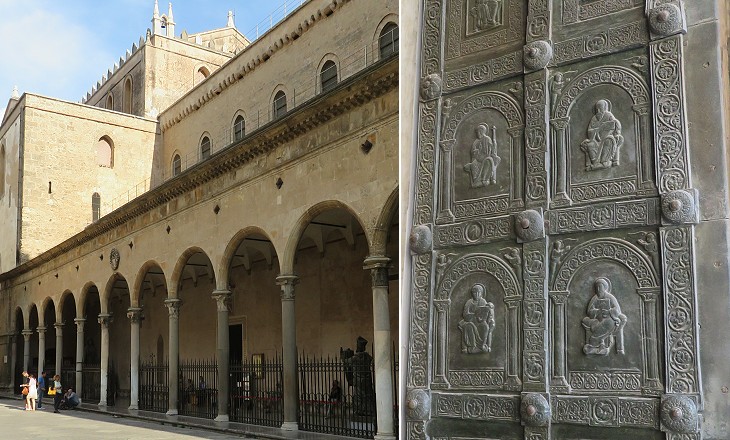 Cathedral: (left) portico of the northern side; (right) detail of its bronze door

Another doorway on the north side, surrounded by mosaic, under a loggia erected by Cardinal Alessandro Farnese in the 16th century, contains bronze doors by Barisano of Trani, which are later and less interesting than those by Bonanno. T. G. Jackson.
Barisano made this door after that for the Cathedral of his hometown in Apulia, another Norman territory. He was more of a goldsmith than a sculptor and the panels bring to mind Byzantine patterns. 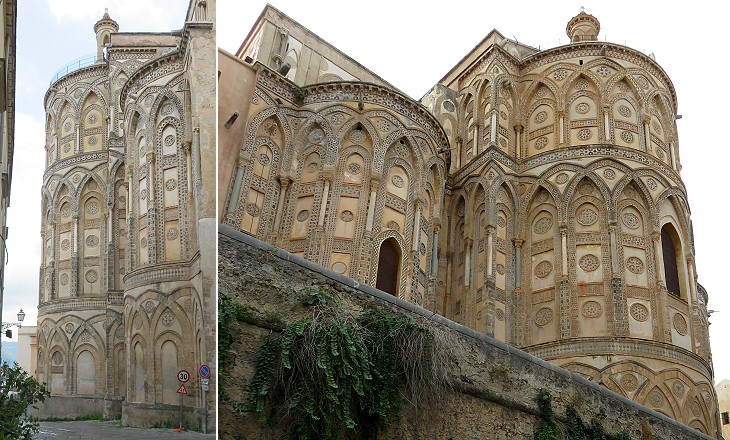 The cathedral exhibits a very disagreeable specimen of the Gothic taste. To increase its ugliness, the injudicious monks have white-washed the outside. Swinburne
The only part of the exterior which shows much attention to design is the east end, which is covered with an extraordinary, and perhaps extravagant, display of polychrome masonry and interlacing arcades of pointed arches. T. G. Jackson
The decoration of the apses is very similar to that of the Cathedral of Palermo. 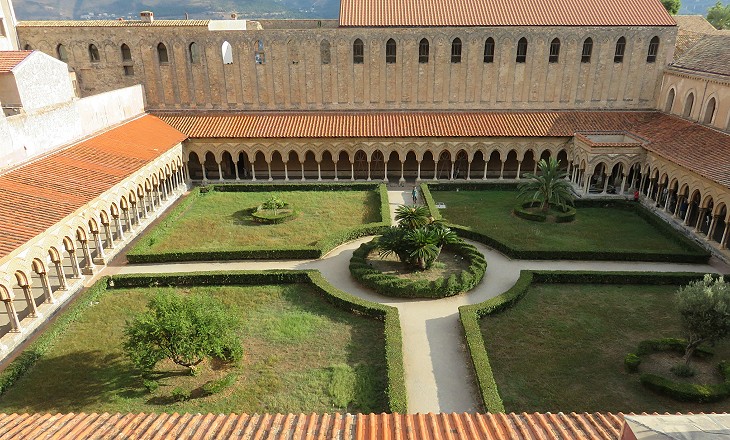 Cloister seen from the roof of the southern aisle

On the south side of the nave is the great cloister, which is singularly well preserved. The arcades are pointed and stilted, and rest on coupled columns of marble, except at the corners of the square, where is a pier composed of four columns grouped together. These angle groups have the shafts richly sculptured with arabesques: the other colonnettes are alternately plain and decorated with mosaic inlay. (..) The Sicilian pointed arch, with its high stilt, and rather obtuse curve, is oriental, and has nothing to do with that of Northern Gothic, but comes from the Saracen school in Egypt, where it had already been known and used for many centuries (you may wish to see the porticoes of the Great Mosque of Kairouan in Tunisia). T. G. Jackson
In recent years the cloister was partitioned into four gardens: Garden of Eden with a wild fig tree, Garden of Song of Songs with a wild pomegranate tree, Garden of the Gospel with a wild olive tree and Garden of the Apocalypse with a date palm. 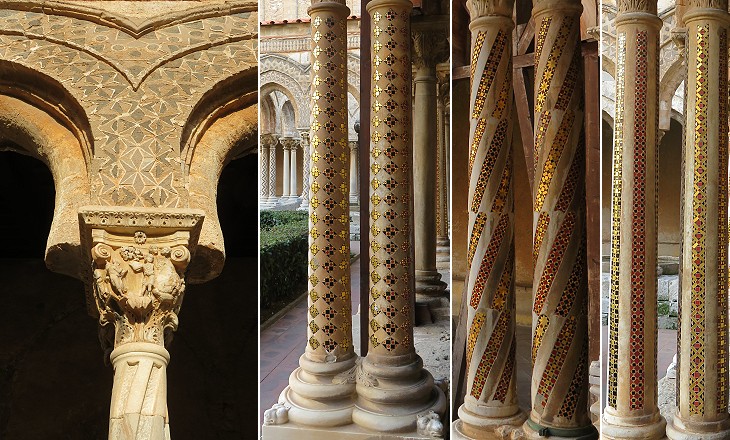 Cloister: (left) detail showing that the size of the capitals does not match that of the arch they support; (right) some decorated columns

There is a perplexing inequality in the work of this cloister. The arches are stilted and pointed, and on the outside are inlaid with intarsia of basalt, and surmounted by a band of the same work under the eaves. (..) The work is like that of the campanile of La Martorana, which was built in 1143, and is roughly executed in a rather coarse stone like that used in the cloister of the Eremiti. But the abacus of the coupled colonnettes does not take the inner order, which hangs in air unsupported, and would fall were it not worked in the solid of the outer order. The colonnettes and their capitals, unlike the arches they carry, are of the finest 12th century work, exquisitely wrought in marble; the alternate shafts are inlaid with glass mosaic, like those at the Lateran and S. Paolo in Rome, and the capitals are magnificently finished, some with foliage, others with figure subjects. (..) The only explanation I can offer is that the arches were prepared by native Sicilians, the same who built the Duomo itself, which is inlaid in the same way, and that the capitals and colonnettes were imported from Italy and worked away from the building without sufficient communication with the local men. T. G. Jackson
All art historians agree that the decoration of the cloister was made by different sculptors, but opinions about their places of origin vary greatly. 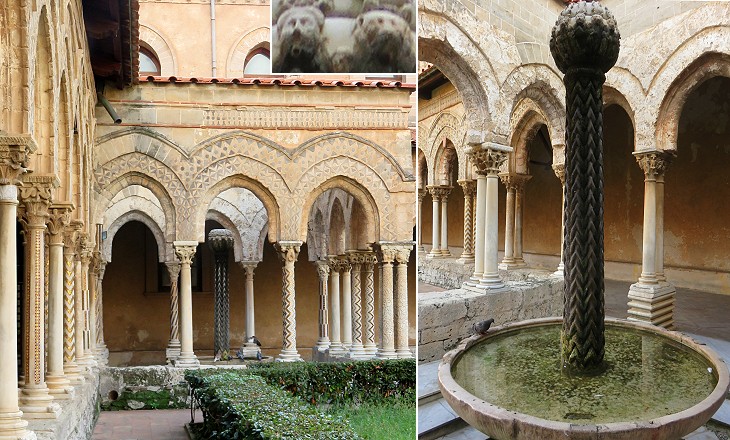 Cloister: (left) enclosure in the south-west corner; (right) its fountain; (inset) detail of the spouts

In the south-west corner of the cloister a square enclosure is formed by breaking out three arches each way to enclose a small court in which is a beautiful fountain, discharging little streams into a basin from small (human and) lions' heads. This gives a distinctly oriental touch to the whole. T. G. Jackson
The design of the fountain with its chevron pattern is so different from that of the columns and capitals that it most likely was made by someone who was not otherwise involved in the decoration of the cloister. 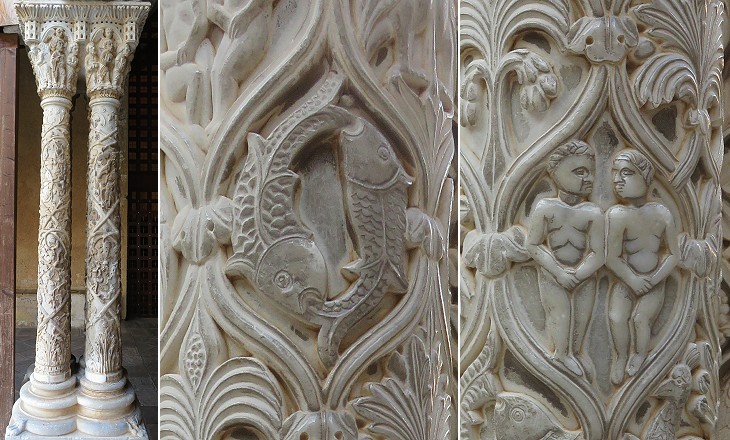 Cloister: columns of the enclosure which are decorated with zodiacal signs: Pisces and Gemini

The subjects depicted on the capitals and on a few columns were picked from illustrated medieval books: religious or historical events, months of the year and zodiacal signs together with a large number of animals, both real or imaginary ones. They are not grouped in an orderly manner and the subject of some capitals is still debated. There are many acanthus scrolls, but also reliefs depicting celandine flowers which were used as a medicament. The Benedictine monks most likely grew officinal (medicinal) plants in the cloister. 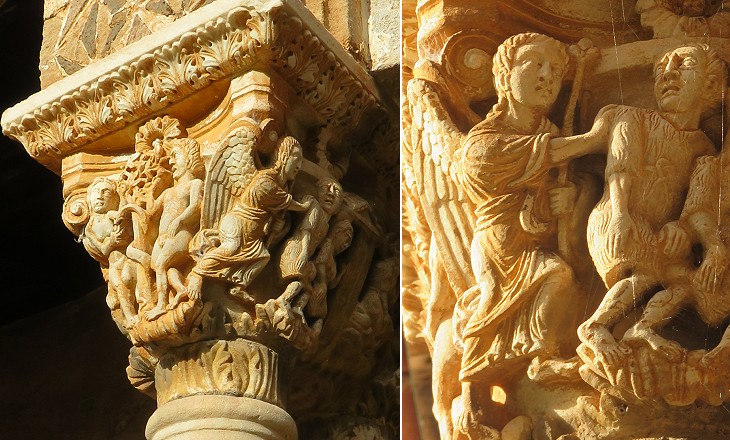 Capital depicting the Fall and Expulsion from Eden. You may wish to see the same subject in a medieval relief at Taormina

The sculpture is superior to anything else of the kind that I saw in Sicily. (..) these splendid capitals are equal to the finest examples of 12th or early 13th century work I have ever seen. T. G. Jackson 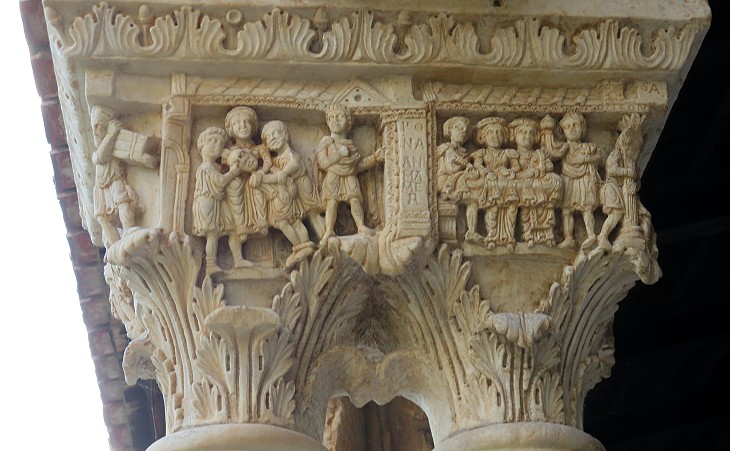 Capital depicting scenes from the life of Samson: (left) the Philistines blind Samson; (right) Samson pulls a column of a Philistine temple 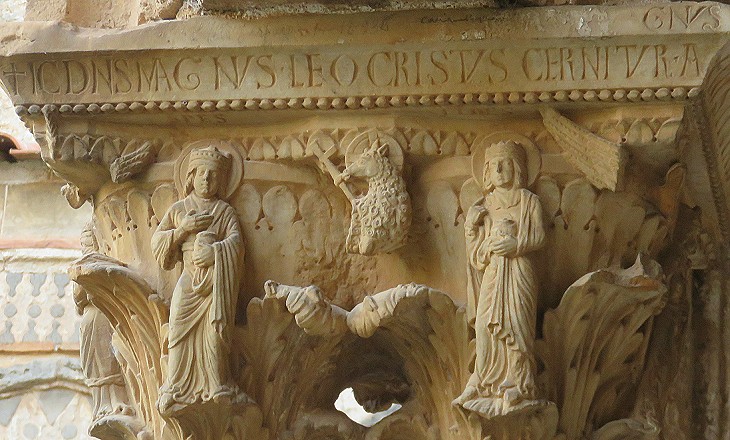 Capital portraying Constantius Chlorus and St. Helena, parents of Emperor Constantine and above it "Hic Dominus magnus leo Cristus cernitur agnus" (Here the Lord, the great lion Christ, is seen as a lamb)

The depiction of emperors and empresses or king and queens was based on the Byzantine traditional iconography at Ravenna and Constantinople where they were shown wearing crowns. 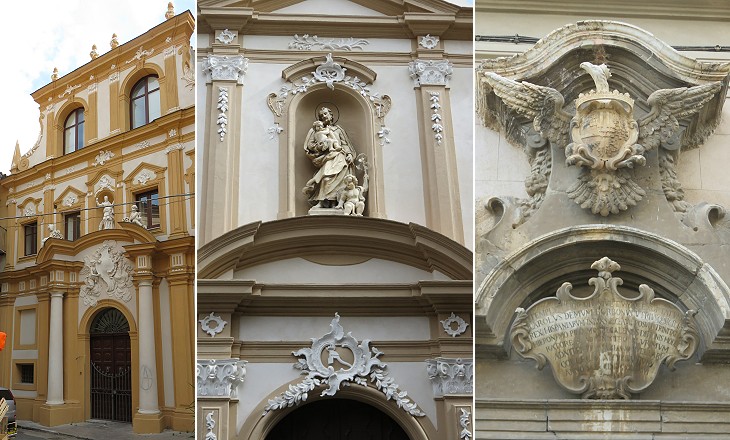 The Archbishops of Monreale could rely on substantial revenues from the estates belonging to the Cathedral and they promoted the construction of a number of mainly XVIIIth century churches and other religious buildings along the main street of the town. Monreale is still an archiepiscopal see.
Move to see the interior of the Cathedral.