- Piazza Armerina and Castelvetrano
(left) Temple to Hercules at Agrigento; (right) detail of the apse of Palermo's Cathedral 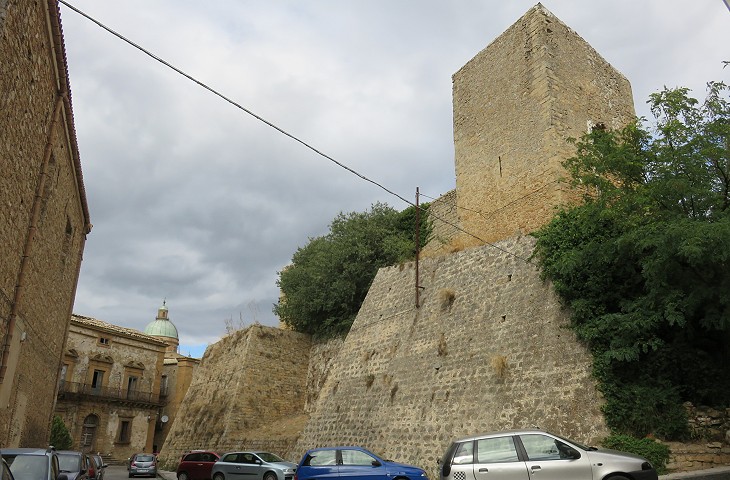 The castle which crowns the height to the S. of the cathedral, has a small square keep, with a square tower at each angle, enclosed by an outer line of battlemented wall. The keep has a pointed door and windows. It is now used as a prison, and is therefore not easily accessible to the traveller.
A Handbook for Travellers in Sicily - Murray - 1864
Thursday, June 3, 1790. I proceeded along a mountainous ridge, totally bare of trees, till I descended towards Piazza, the approach to which is highly picturesque. In the valley of Piazza, my sight, which had been wearied by so many miles of wild and dreary surface, was refreshed with the appearance of luxuriant and varied foliage. (..) The modern town is irregularly built, on the summit and declivities of an eminence. On an adjoining height are the ruins of an old castle. (..) From the slight attention paid to it by the classic writers, and the absence of any vestige of antiquity, Piazza was evidently a place of little consequence in early times.
Sir Richard Colt Hoare - A Classical Tour through Italy and Sicily - published in 1819.
Colt Hoare would have been surprised to learn that a large ancient Roman villa stood three miles south of the town. It was excavated in 1929 and archaeologists were impressed by its fine floor mosaics. Today the site (known as Villa Romana del Casale and included in 1997 by UNESCO in their World Heritage List) attracts thousands of visitors, some of whom take a look at the monuments of Piazza Armerina (Armerina was added in 1863 to distinguish the town from other Italian locations and is a reference to place-of-arms, an assembly point for soldiers).

Side view of the Cathedral with Palazzo Trigona

The Chiesa Madre is a good structure, and, indeed, the best of which it can boast. Colt Hoare
The Cathedral is a structure of the commencement of the 17th century, though on the site of a building some centuries earlier. It was raised by sums expressly bequeathed by a noble named Marco Trigona and his wife. 1864 Murray Handbook
In 1818 the Diocese of Piazza was created and Chiesa Madre (or Matrice), its main church, became the Cathedral. It stands at the top of the town and it is a summary of its history and of the architectural styles which prevailed in Sicily. 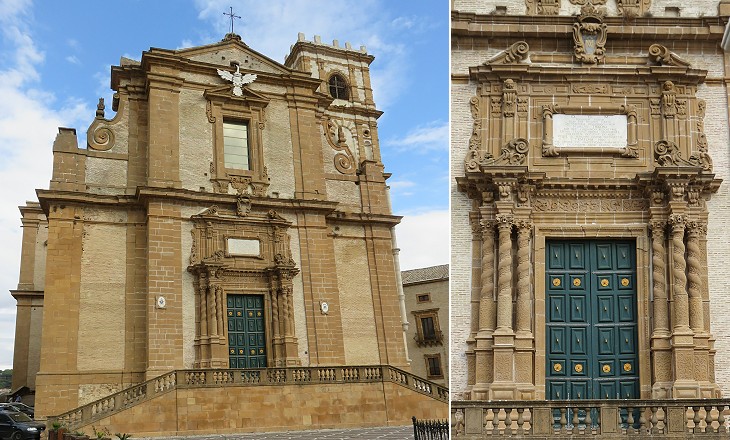 Like most of the principal edifices of Piazza it is constructed of the reddish stone of the locality; it is of Tuscan architecture, with a façade of 2 arches, and a portal of incongruous ornateness. 1864 Murray Handbook
In 1624 Innocenzo Massimo from an important Roman family was appointed Bishop of Catania. He commissioned Orazio Torriani, a Roman architect, with the design of a new façade for the Chiesa Madre. He utilized bricks for its decoration, similar to what he had done at S. Lorenzo in Miranda. The excessively decorated and oversized portal was designed by Andrea Buonamici after Torriani returned to Rome. 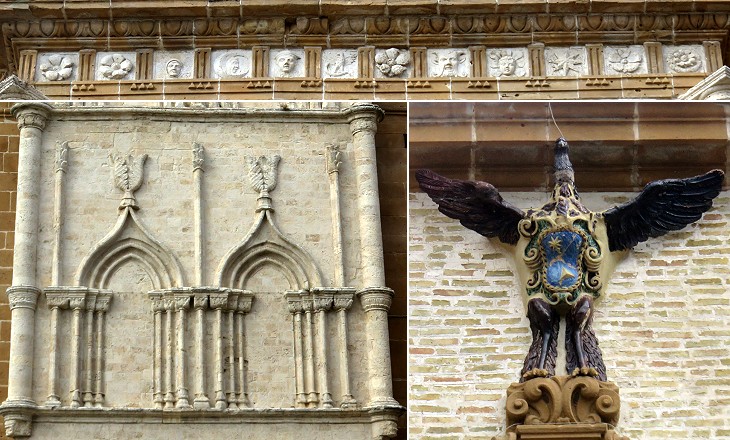 The Campanile at the S. angle of the façade, retains traces of Gothic architecture in its two lower stories. 1864 Murray Handbook
The church designed by Torriani stood on the site of a previous one which had a fine Catalan Gothic bell tower with Renaissance additions. When it was built Sicily was ruled by the Kings of Aragon (and Counts of Barcelona) and the influence of the Gothic style of Catalonia can be noticed in many monuments of the island, e.g. S. Giorgio Vecchio in Ragusa.
Palazzo Trigona was built towards the end of the XVIIth century on previous properties of the family. A large stone eagle holding the family coat of arms was placed near the cornice because there was not enough space above the portal. Similar eagles can be seen in many parts of Sicily and in particular in Palermo where that on the Viceroy's palace resembles the Trigona one. 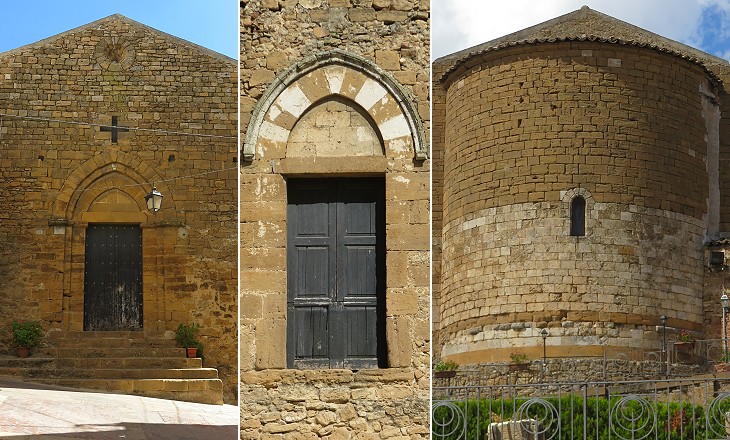 The original town, which stood 3 m. to the W., was one of the settlements of the Lombard followers of Count Roger, and was utterly destroyed in 1161 by William the Bad for the part it took in the rebellion of Bonello. That sovereign constructed the present town from its ruins. 1864 Murray Handbook
Piazza was repopulated with Lombard settlers and traces of the northern origin of the population have been found in the dialect which is spoken in the town. The small church shown above is dated XIIIth century and in 1420 it was acquired by the local representatives of the Knights of Rhodes (later on of Malta). 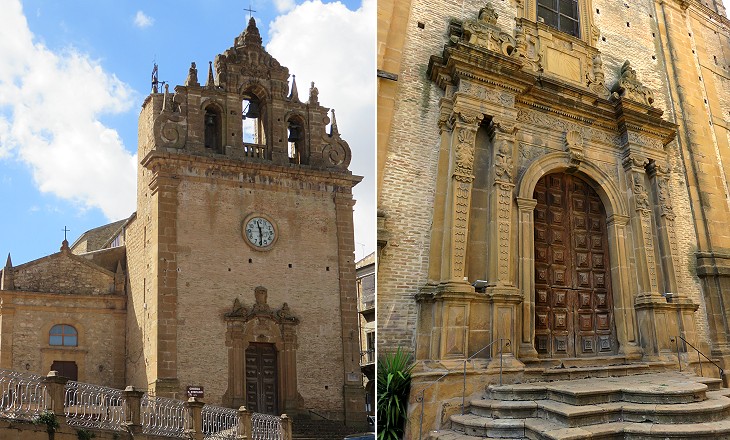 Piazza is located in the centre of the island and it was not affected by the 1693 earthquake which razed Noto to the ground and caused major damage in Syracuse and Catania. The reconstruction of these towns led to designing buildings which were less likely to fall. In many new churches the bells were placed in a central loggia above the façade rather than in a separate tall bell tower. S. Stefano was built in the late XVIth century, but when it was decided to embellish its façade a loggia for the bells was added in 1742, in a style similar to that which characterizes the Late Baroque Towns of the Val di Noto.
The portal of S. Rocco was meant to show the wealth of the adjoining Benedictine monastery. This religious order had very large nunneries and monasteries in many towns of Sicily. Nuns and monks came from the richest families. In 1770 the size and decoration of S. Nicolò l'Arena, a Benedictine monastery in Catania, impressed Patrick Brydone to the point that he compared it to Versailles.

Externally Piazza has rather a mean aspect, but, unlike most Sicilian towns, it is better than it looks. It contains some good houses and neat shops; its principal streets are well paved, and being the residence of many nobles and landed proprietors, it can boast of respectable palaces not a few. 1864 Murray Handbook 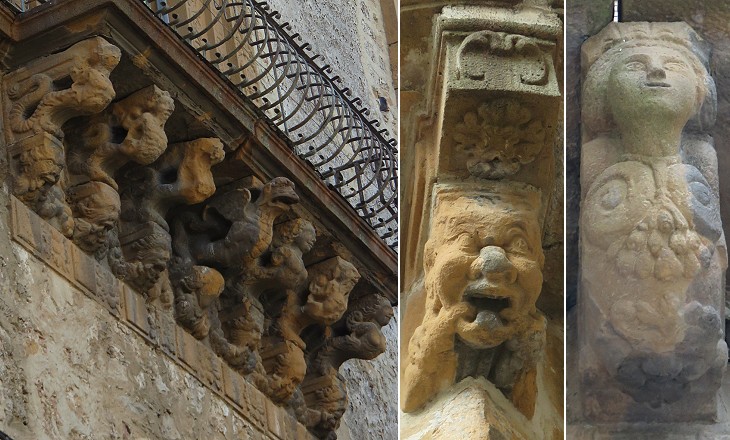 Highly decorated balconies, very often with grotesque reliefs, are another feature of the reconstruction after the earthquake of Noto, Ragusa, Palazzolo and other towns. This fashion reached Piazza, but the stone which was used was not too good; it brings to mind that of Villa Palagonia at Bagheria. 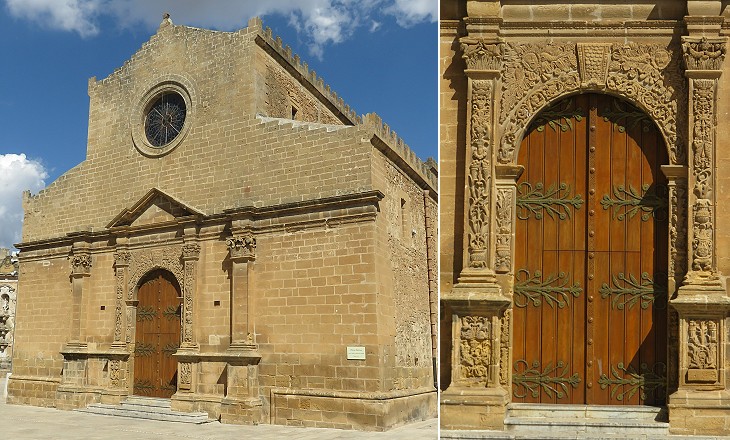 Chiesa Matrice and its portal

Wednesday, March 10, 1790. Castel Vetrano is a considerable town, though at present it contains not above a third part of its former population. Here is little to attract the attention of a stranger. (..) The view is very fine. The eye glances over the whole plain, bounded by the sea, and rests on the ruins and temples at Selinunte, while the variety of fruit-trees, and the general cultivation, exhibit the appearance of a continued garden. The soil is highly productive, and the wines are esteemed among the best in Sicily. Colt Hoare
Castelvetrano is another town which was founded during the Norman rule. It became a large settlement in the XVIth century but when Colt Hoare visited it its population had been reduced by famine.
Chiesa Matrice, the main church, is of early foundation, but was rebuilt in the XVIth century; the only decoration of the façade is a portal with somewhat Islamic carvings. 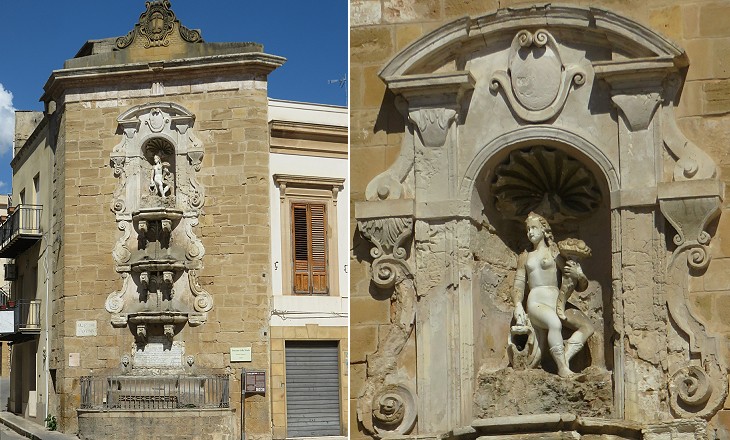 Fontana della Ninfa and detail of the statue

Given the general aspect of the town the view of this fountain comes as a surprise. It was made in 1615 by Orazio Nigrone, an hydraulic engineer from Naples and it celebrated the completion of an aqueduct. The naked statue of a nymph must have stunned the peasants of Castelvetrano whose wives, according to the 1864 Handbook, wore black veils. It was commissioned by Giovanni d'Aragona of a very important Sicilian family and Prince of Castelvetrano, who most likely praised the naked statues of Fontana Pretoria, Palermo's main fountain. 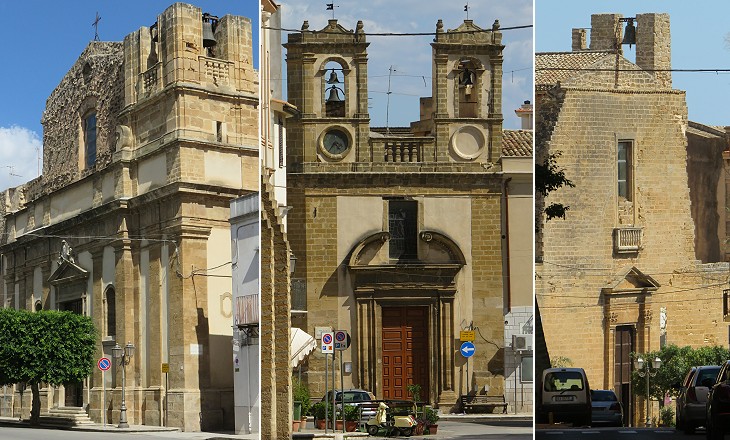 Castelvetrano has many churches; their interior is highly decorated but the façades are generally unfinished, exception made for Chiesa delle Anime del Purgatorio (see below) which has an elaborate XVIIIth century stucco decoration. 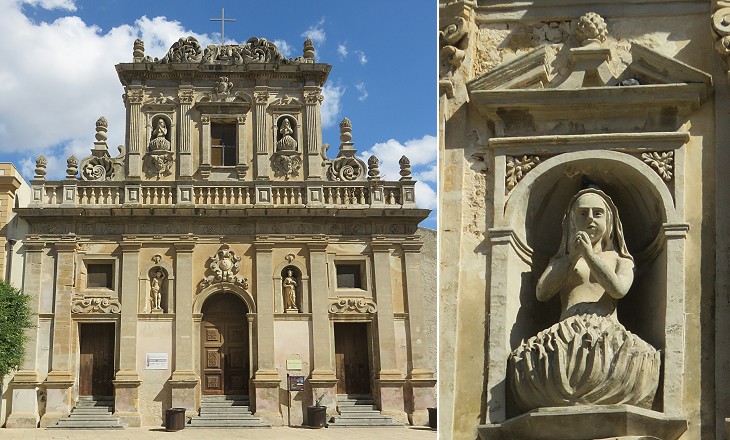 Chiesa delle Anime del Purgatorio: (left) façade; (right) a soul in Purgatory; an architectural detail of the façade is shown in the image used as background for this page

Churches to the Souls in Purgatory can be found in many Sicilian towns (e.g. in Cefalu and Ragusa) and on Malta; their stucco statues depict the souls as naked women emerging from flames.