- Rome and Malta
(detail of a statue of St. Catherine of the Wheel in the parish church of Zejtun)

Travellers from Rome find many reminders of that city on Malta. This page deals with some aspects of the historical, religious and artistic ties between Rome and Malta. There are more chances to see the statue of a pope in the streets of Malta than in those of Rome. Many towns of the former Papal State have a large statue of a pope in their main square (see that of Pope Julius III in Perugia), but in Rome the popes preferred to place their statues inside churches or in Palazzi del Campidoglio, probably because they feared they could be damaged during riots. 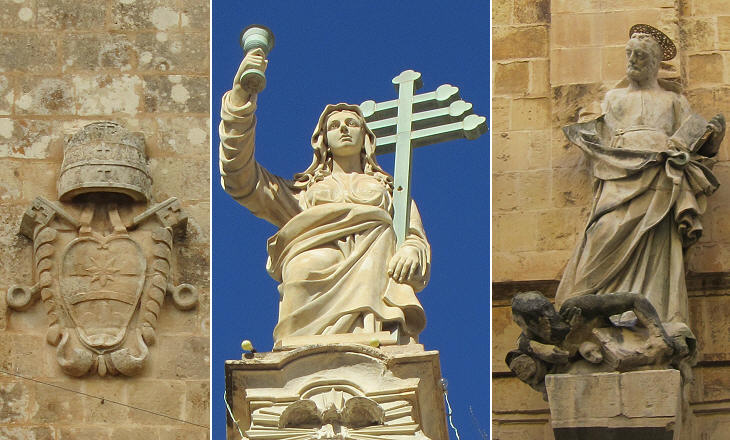 Usually the façades of Maltese churches bear the coats of arms of the Bishop and/or of the Grand Master who were in charge at the time they were built, but in some instances tribute was paid to the reigning pope by placing his coat of arms.
The statue of Religion holds a bronze cross and raises a bronze cup similar to the gigantic statues of Jesus Christ and the Apostles at the top of S. Pietro in Rome.
The statue of St. Ignatius in the Jesuit church of Valletta resembles that which decorates the façade of il Gesù in Rome. 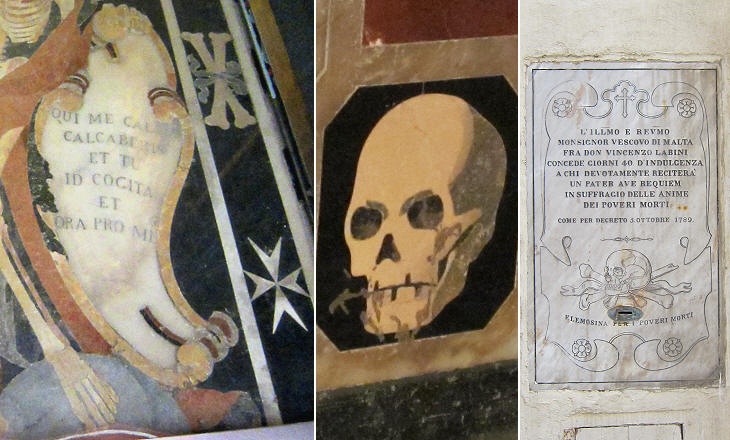 In Rome (and on Malta alike) during the XVIIth and XVIIIth century reminders of Death often decorated not only funerary monuments, but also façades of churches and alms boxes. They were often accompanied by gruesome inscriptions such as that on one of the gravestones shown above: Qui me calcas, calcaberis (he who treads on me, will be trodden). 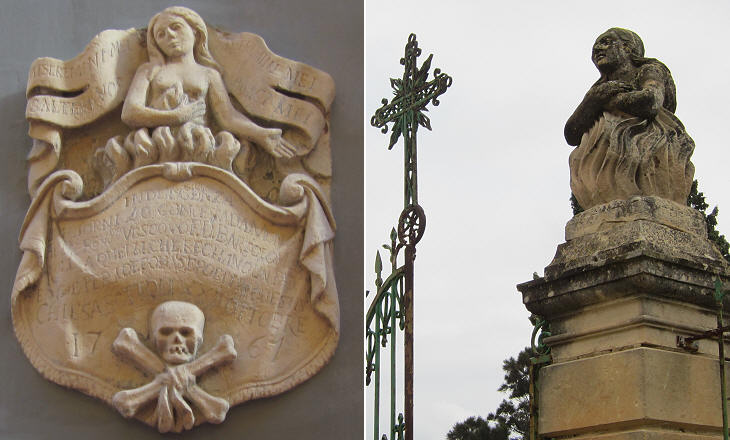 Souls in Purgatory at Valletta (left) and Zejtun (right)

The Church formulated her doctrine of faith on Purgatory especially at the Councils of Florence and Trent. The tradition of the Church, by reference to certain texts of Scripture, speaks of a cleansing fire.
Catechism of the Roman Catholic Church.
Indulgences, i.e. the remission of temporal punishments in Purgatory have a key importance for the Roman Catholic Church. Souls in Purgatory are believed to be purified by a cleansing fire. The duration of this purification process can be shortened by prayers.
There were about thirty knights in each galley, making signals all the way to their mistresses, who were weeping for their departure upon the bastions; for these gentlemen pay almost as little regard to their vows of chastity, as the priests and confessors do.
Patrick Brydone - A Tour to Sicily and Malta in 1770
It were to be wished, that a protection could be found against the dangers attendant upon sacrifices to Venus, whose priestesses flock thither from all quarters. They belong to all nations; and their abundance, which is in such whimsical opposition to one of the vows of the knights, was singularly pernicious to the crews of the vessels that frequented these seductive, but perfidious seas.
Charles Sigisbert Sonnini - Travels in Egypt in 1777
The excerpts from Brydone and Sonnini might explain why on Malta souls in Purgatory were portrayed as attractive young women surrounded by flames. 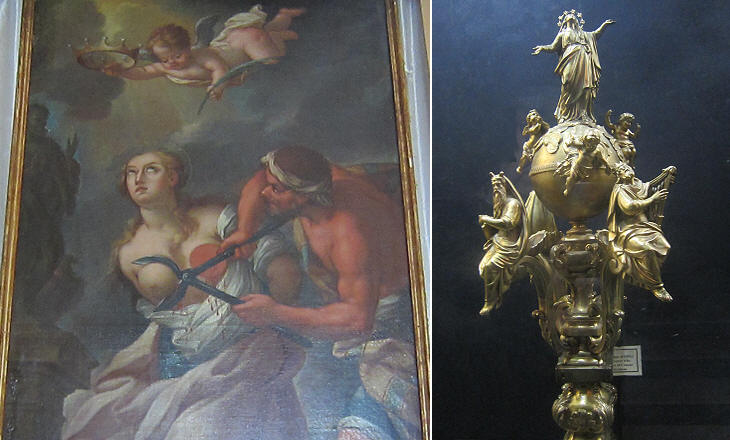 In the second half of the XVIth century the Roman Catholic Church issued guidelines for the representation of saints; painters and sculptors were recommended to emphasize the role of the ancient martyrs and their heroic sacrifices. Eventually this led to depicting torture scenes. On Malta this practice continued well into the XIXth century. The frightening painting showing the martyrdom of St. Agatha was moved to a museum only very recently.
In 1857 Pope Pius IX erected a column in Piazza di Spagna to celebrate the Immaculate Conception of the Virgin Mary dogma. A silver mace in the Treasury of the Cathedral of Victoria has the same structure and personages as the column. 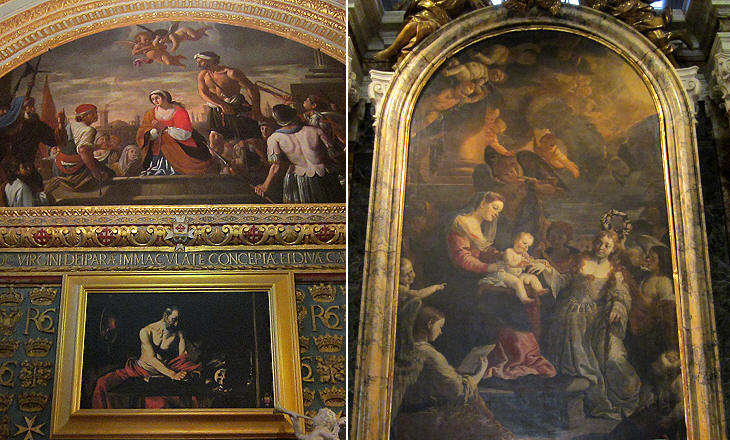 St. John's Co-Cathedral - Chapel of Italy: paintings by Caravaggio (St. Jerome - original now in the Oratory of the church) and by Mattia Preti (top left Martyrdom and right Mystic Marriage of St. Catherine of the Wheel)

From an artistic viewpoint a key link between Rome and Malta is represented by the works of two Italian painters, who although not being born in Rome, spent many years in the Eternal City before moving to Malta. 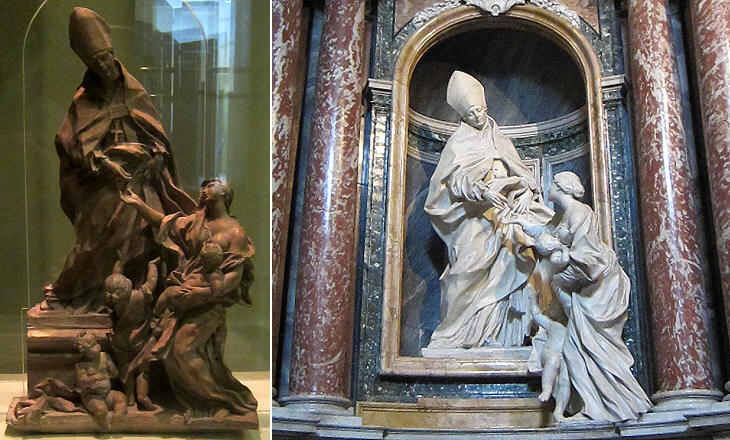 Melchiorre Caffà: The Charity of St. Thomas of Villanova: (left) clay model at the Museum of Fine Arts of Malta; (right) the statue at S. Agostino in Rome

Melchiorre Caffà (in Malta Gafà) is an artist who travelled the other way round from Malta to Rome where he was much appreciated by Gian Lorenzo Bernini. 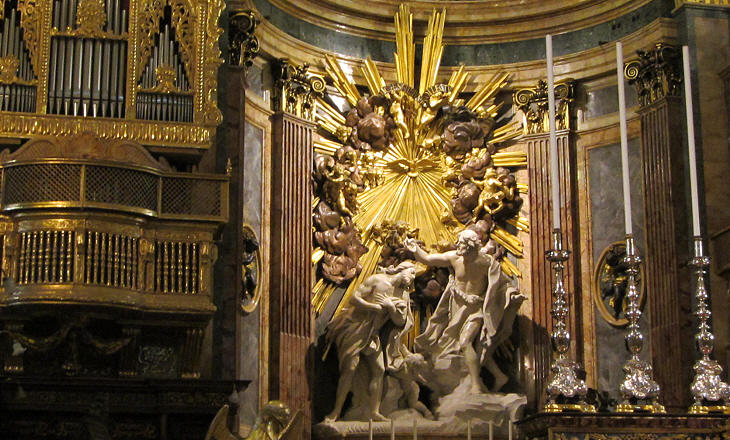 In 1667 Caffà died of injuries resulting from an accident which occurred while he was working at a foundry in Rome at the preparatory cast of a bronze group for the apse of St. John's. The statues were eventually made in marble by Giuseppe Mazzuoli, his assistant; they are very similar to those made at the same time by Antonio Raggi for Cappella Falconieri in S. Giovanni dei Fiorentini. 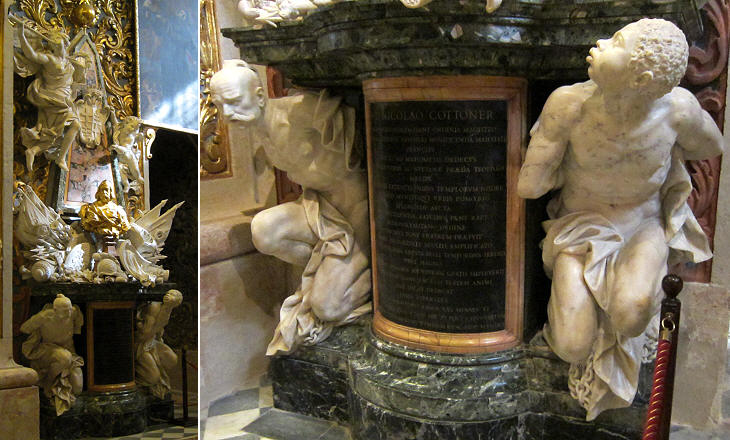 In the right aisle of the church are several splendid monuments to the memory of the Grand Masters, among which that of Cotonner displays the greatest merit.
Richard Colt Hoare - A classical tour through Italy in 1790
Guidi was a sculptor who was not part of Gian Lorenzo Bernini's inner circle. He had a very active workshop; his statues can be found in many churches of Rome. You may wish to see a page on the use of coloured marbles in Baroque Rome. 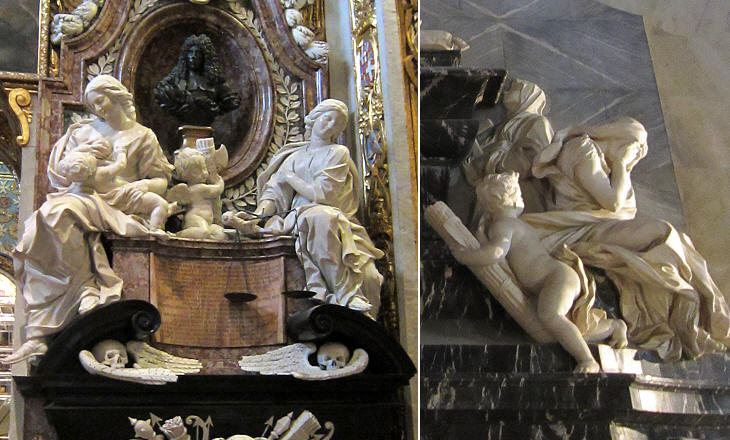 The monument to Grand Master Perellos, consistent with the Roman tradition, shows the dead between two Virtues (Charity and Justice). The putto bearing the fasces which are a symbol of Justice was devised by Bernini to portray this virtue (more on this topic). 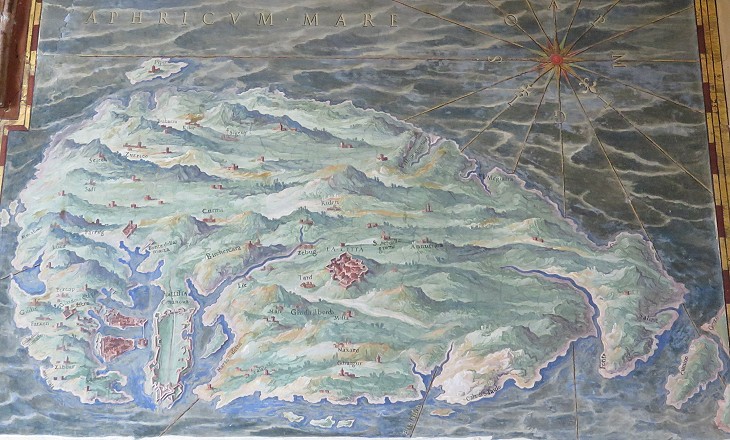 1582 fresco showing Malta at Galleria delle Mappe Geografiche in the corridors of Palazzo del Belvedere in Rome; it shows only the fortifications of Valletta because the construction of the town was yet to be completed

The image used as background for this page shows a large flag of the Holy See at Victoria.