- XVIth Century Grand Masters
(detail of a statue of St. Catherine of the Wheel in the parish church of Zejtun)

You may wish to see an introductory page with a map first. This page is illustrated with coats of arms of the Grand Masters. A brief outline of the history of Malta before 1530 is provided in a separate page. 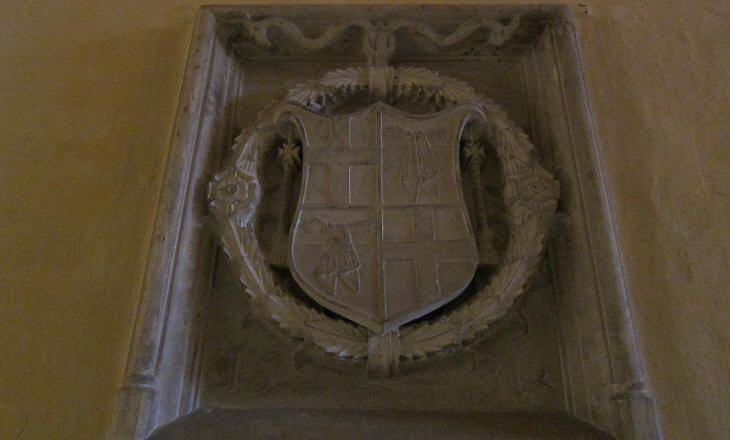 The description of Villiers' entrance into Città Notabile was written more than a century after the event. Villiers accepted the offer of Malta made to him by Emperor Charles V, only as a temporary mean to avoid the dissolution of the Order. From Malta he hoped to regain Rhodes and the other possessions the Knights surrendered to Sultan Suleyman the Magnificent in 1522.
Villiers, instead of placing his residence in Città Notabile, the capital of the island, chose to stay at Borgo, the main harbour. In the following years the Knights' small fleet joined the Spanish one in raids along the coast of the Peloponnese where the fortress of Coroni was seized for a short time.
The Spanish raids were retaliation for those of Ottoman corsairs on the coasts of Spain and Italy, rather than a realistic attempt to conquer territories in mainland Greece. 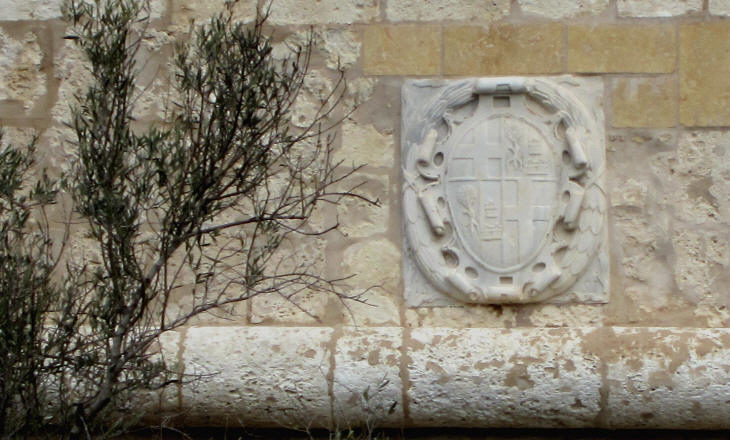 During the short governments of the two following Grand Masters (Pietrino del Ponte and Didier de Tholon Sainte-Jaille), the Knights continued to fight at the side of the Spaniards; their greatest achievement was having contributed to the capture of Tunis in 1535, which however had been prompted by a revolt of Christian prisoners inside the castle.
The appointment in 1536 of Grand Master Juan de Homedes y Coscon led to an even closer alliance with Spain. Maltese ships took part in the Battle of Preveza in 1538 which ended in disaster for the Christian fleet. Ottoman corsairs led by Hayruddin Barbarossa (Red Beard) and after him by Turgut Reis (aka Dragut) raided the coasts of Malta. In 1551 Dragut ousted the Knights from Tripoli which Charles V had given them together with Malta. In that same year Dragut landed on Gozo, seized the citadel and took the whole population of the island into slavery. Some historians charge Grand Master Homedes of having been too subservient to the Spaniards and of not having cared enough about protecting Malta. 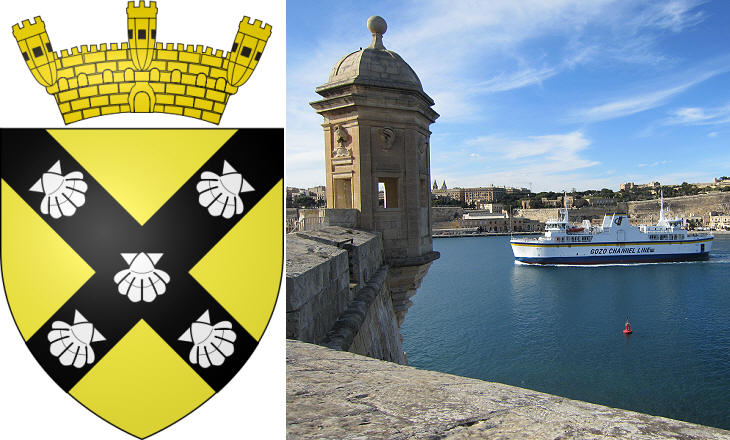 Claude de la Sengle (1553-1557); (left) coat of arms of the municipality of Senglea (Isla) which is identical to that of the Grand Master; (right) the "Guardiola" of Senglea

During their long history the Knights had to deal with the fact that the countries from which they came were at war. They were helped in remaining united by their common faith, but the long series of wars between France and Spain in the first half of the XVIth century caused frictions between the knights of the three French tongues (France, Provence and Auvergne) and those of the two Spanish tongues (Aragon and Castile).
Homedes was succeeded by French Grand Master Claude de la Sengle who concentrated his efforts on protecting Malta, an objective which all Knights shared. He built an imposing bastion and other fortifications at Isola (island), a long and narrow peninsula opposite Borgo which was renamed Senglea. 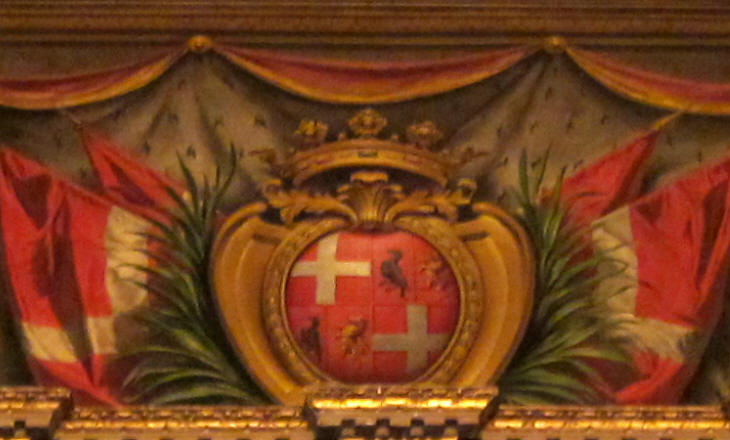 In February 1560 a large Christian fleet sailed from Malta towards Tripoli with the aim of reconquering that town; eventually the objective of the expedition changed and the ships landed more than 10,000 troops on Djerba, an island in Southern Tunisia which was easily occupied. While the Christians were fortifying their positions a large Ottoman fleet commanded by Piyale Pacha arrived at Djerba and attacked the invaders. The expedition ended with more than 5,000 men captured by the Ottomans.
The fact that the Christian fleet gathered on Malta to sail towards Tripoli, led Sultan Suleyman to set himself the objective of conquering the island. In early 1565 preparations for the invasion of Malta were made at Constantinople, but they did not go unnoticed by Venetian and Maltese spies. Grand Master Valette fortified the defences of Borgo, Senglea and Fort S. Elmo at the entrance of the great harbour and he alerted the Spanish Viceroy of Sicily on the forthcoming invasion. 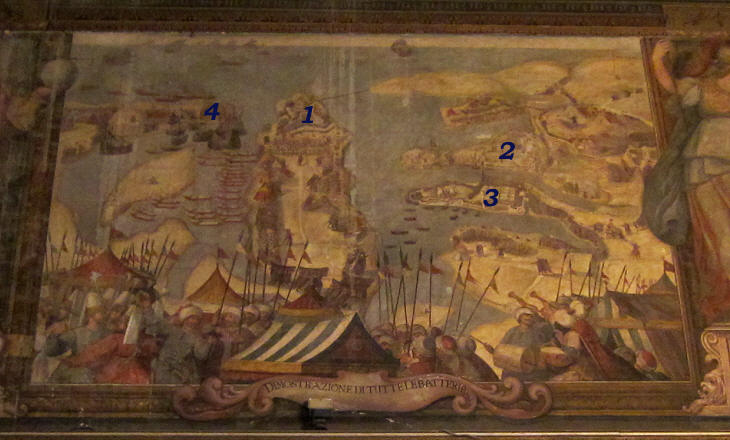 The Ottomans landed in May and they laid siege to Fort S. Elmo to acquire control of the entrance to the great harbour; they eventually succeeded in their objective, but only on June 23 their flag was raised on the fort; they suffered heavy losses and in the fight Dragut was killed.
At the end of June the Knights at Borgo received some reinforcement troops from Sicily (soccorso minore). The Ottomans laid siege to Borgo and Senglea, but their attacks were repelled. Lala Mustafa Pacha, the Ottoman commander, did not have a clear strategy. He tried to seize Città Notabile (Mdina), but the attempt failed and by doing this he lessened the pressure on Borgo and Senglea. Eventually on September 7 other Christian reinforcement troops landed on Malta (soccorso maggiore). Mustafa Pacha overestimated their number and hastily ordered his men to leave the island.
Valette decided that the Order needed a see appropriate to the status it had acquired by defeating the Ottomans (after a very long period of Ottoman victories). The Great Siege had shown that the main peninsula of the great harbour could not be protected only by Fort S. Elmo, which was located at its tip. Valette therefore decided to build a new town there. The design of its fortifications and urban layout was entrusted to Francesco Laparelli, a military engineer who had designed the new walls of Castel Sant'Angelo in Rome for Pope Pius IV. The first stone of La Valetta, the new town, was laid on March 28, 1566. 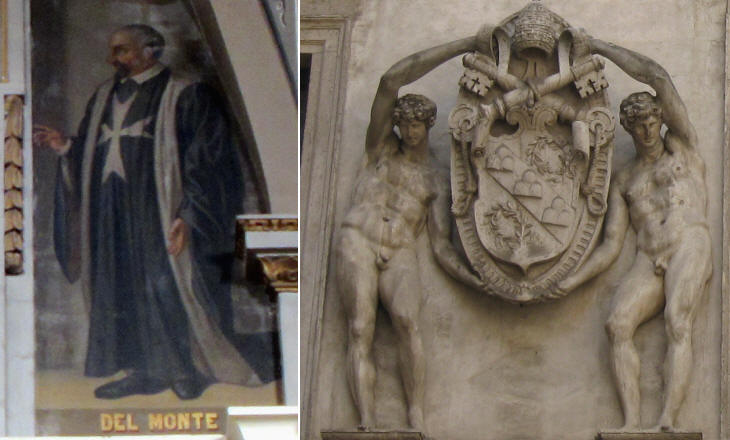 Relations between the Order and Rome became so strong that Pietro del Monte, Maltese Ambassador to the Papal State, was elected Grand Master after Valette. He was nephew of Pope Julius III (Giovanni Maria Ciocchi del Monte) and he had adopted his uncle's surname and coat of arms. He continued the construction of Valletta and when Francesco Laparelli expressed the desire to leave Malta, Del Monte replaced him with Girolamo Cassar. Cassar had learnt the ropes of military architecture from Laparelli, but the Grand Master wanted him to design also the auberges (hostels/meeting places) for the Knights, the palace for himself and the churches of the new town. Cassar was therefore sent to Rome to become familiar with Italian Renaissance architecture.
In 1570 the Ottomans landed on Cyprus, a Venetian possession. They were commanded by Lala Mustafa Pacha who was given the epithet of kara (black) because of his cruelty during this campaign and in particular after the surrender of Famagusta, the capital of the island, in August 1571. The reaction of the Christian nations was slow and only at the end of August all Christian vessels gathered at Messina in Sicily. Malta sent three ships out of a total of more than 200. On October 7, 1571 the Christian fleet engaged the Ottoman one near Lepanto and defeated it. The Battle of Lepanto marked a turning point in the balance of power at sea between the Ottomans and the Christian nations. 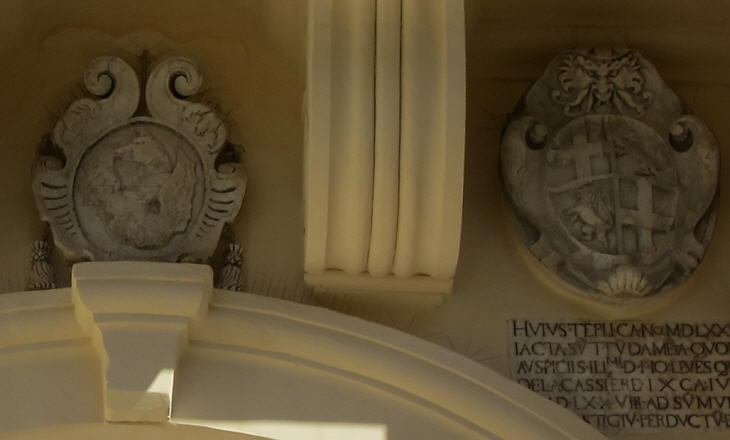 One of the factors which led Grand Master Villiers to set his quarters at Borgo, was that he preferred to keep his knights away from the scrutiny of the Bishop of Malta, who resided at Città Notabile (Mdina). At a time of deep religious divisions Villiers preferred to deal with such matters behind closed doors. The contrast between Grand Masters and Bishops of Malta reached a peak when Grand Master Cassière was forced to accept the presence of an Inquisitor at Malta.
A crisis arose in the relations with Venice because the Knights confiscated goods belonging to Jewish merchants on board Venetian ships. The Republic threatened to confiscate all properties of the Order in its territories and Grand Master Cassière had to formally apologize for the conduct of his knights.
Cassière's own position was challenged by some knights who tried to replace him with another Grand Master. The two rivals were summoned to Rome in October 1581. Pope Gregory XIII supported Cassière's position and treated him with great respect. Mathurin Romegas, the rival Grand Master, was coldly received at the Papal court and he died a few days later. Cassière was confirmed as legitimate Grand Master, but he fell ill and passed away before returning to Malta. 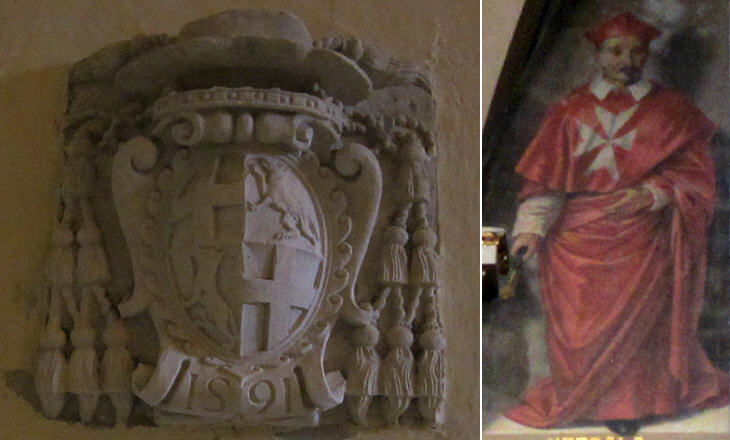 The new Grand Master was elected in Rome; the three candidates were selected by Pope Gregory XIII and they enjoyed his trust. The election of Grand Master Verdale did not please many knights at Malta and Verdale's authority was continuously challenged. In 1588 Pope Sixtus V gave him the cardinal's hat in the hope of strengthening his position. Verdale was the first Grand Master to become a cardinal after the appointment of Pierre d'Aubusson in 1498.
Verdale built a villa almost on the other side of the island in respect to Valletta, perhaps to forget the bitter disagreements he had with his knights. It is located in the only wooded area of the island (Maltese Buskett, Ital. Boschetto, small wood) and today it is the official summer residence of the President of Malta, after having been that of the British Governors. 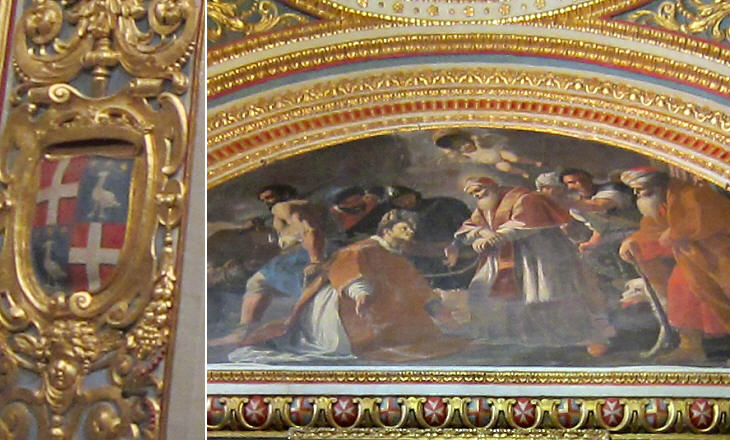 Martin Garzes (1595-1601): St. John's Co-Cathedral - Chapel of Aragon: (left) coat of arms of the Grand Master; (right) St. Lawrence meets Pope Sixtus II while he is being carried to his martyrdom by Mattia Preti

After Verdale the Knights chose a Grand Master who could restore cooperation and trust among themselves. Martin Garzes was almost seventy when he was elected and he valiantly endeavoured to heal the rifts of the past. He was helped in his task by the peace signed at Vervins in 1598 between representatives of King Philip II of Spain and of King Henry IV of France. It was a lasting peace which had a positive influence also on the Order, because Spain and France were the countries of origin of most of the knights.
Grand Master Garzes was buried in the crypt of St. John's Co-Cathedral, but when the interior of the church was refurbished in the following century, a small coat of arms of Garzes was placed in the Chapel of Aragon, the tongue he belonged to. The chapel is dedicated to St. Lawrence who, according to tradition, was born in that country.

The image used as background for this page shows a gerfalcon and a lion, the heraldic symbols of Grand Master Jean Parisot de Valette in the Grand Masters Palace.

Move to:
Introductory page
Brief outline of the history of Malta before 1530
The Grand Masters of the XVIIth century
The Grand Masters of the XVIIIth century
Valletta: the fortifications
Valletta: the churches
Valletta: other monuments
Borgo/Città Vittoriosa (Birgu)
Senglea (Isla)
Città Cospicua (Bormla)
Floriana
Other Fortifications
Città Vecchia (Mdina)
Gozo Island
Churches in the minor towns
Other monuments in the minor towns
Rome and Malta