- The Palaces of Valletta
(detail of a statue of St. Catherine of the Wheel in the parish church of Zejtun)

The first stone of Valletta was laid on March 28, 1566. Precedence was given to the construction of imposing fortifications which were designed by Francesco Laparelli, an Italian military architect. The construction of the first churches and palaces of the town was entrusted to Gerolamo Cassar, a Maltese assistant to Laparelli after the latter left the island in 1569. 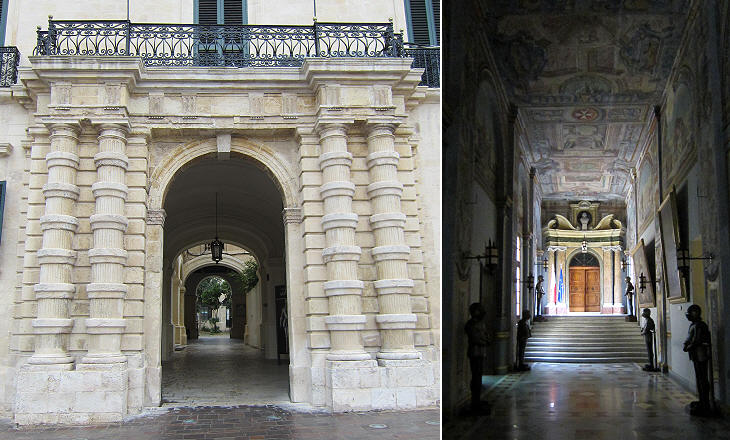 The principal buildings of Valletta, are the palace of the grand master, the infirmary, the arsenal, the inns or hotels of the Seven Tongues, and the great church of St. John. The palace is a very noble though a plain structure, and the grand master (..) is more comfortably and commodiously lodged than any prince in Europe.
Patrick Brydone - A Tour to Sicily and Malta in 1770
The background of Laparelli and Cassar was military architecture and the portal of the Grand Masters Palace was designed in order to convey a feeling of strength and might. It was located near the right end of the façade; an identical portal was built by Grand Master Pinto in the XVIIIth century at the other end of the façade to provide the building with symmetry.
The old portal is utilized by visitors to access the State Rooms open to the public and the Armoury of the palace; the new portal is reserved for the President of Malta and his guests. After 1800 the Grand Masters Palace became the residence of the British Governors of Malta. They made some changes to the building, such as the addition of symbols of the United Kingdom, but overall they maintained its character as they regarded themselves as the inheritors of the Grand Masters. Grand Masters Palace: 1220 Conquest of Damietta during the Fifth Crusade, fresco by Lionello Spada, a painter from Bologna, in the Pages Room

The Sala del Gran Consiglio was used for the official gatherings of the Order and in 1575-1581 it was decorated with frescoes depicting the key events of the 1565 Great Siege of Malta; some of these frescoes (The Great Siege of Malta, The Assault on Senglea, The Siege of Borgo, The Fight at the Castile Bastion and The Construction of Valletta) can be seen in other pages of this section.
In 1609 Grand Master Alof de Wignacourt commissioned Lionello Spada the decoration of other rooms with frescoes depicting glorious achievements of the Order which occurred when the Knights supported the Crusaders in the Levant. 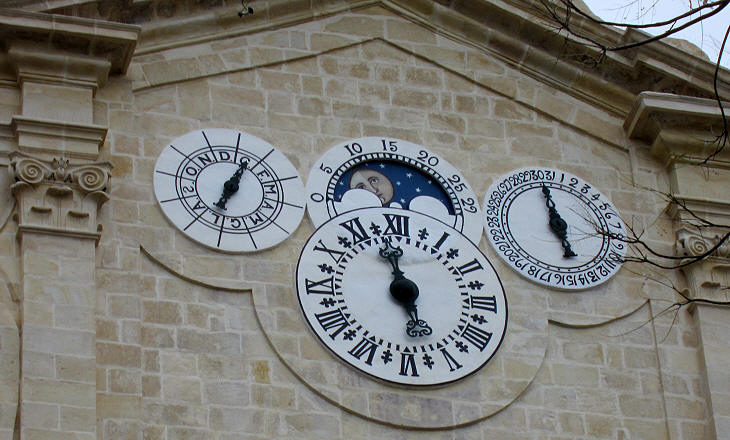 In 1745 Grand Master Pinto commissioned a very elaborate clock having four dials showing the hour, the lunar phase, month and day. The hour dial suggests that the Knights used the European hour counting system, rather than the Italian one (see an old Italian clock at Sutri). 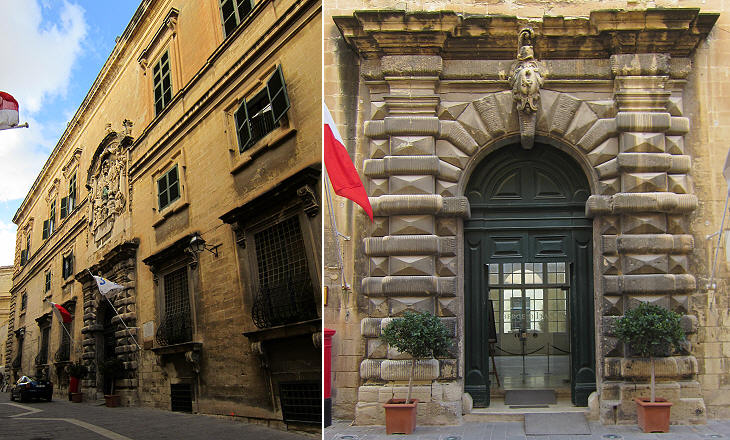 Heer is an Alberg for the English Nation, or rather a piece of ground enclosed, with the foundation of an Alberg, the walls being scarcely reared up. This ground we were told some of the Citizens would have bought and built upon, but the Grand Master and Council refused to sell it, not despairing it seems that one day our Nation may be reduced again to the obedience of the Romish Church.
John Ray - Observations (..) made in a journey through part of (..) Italy in 1663
On getting to land, we found ourselves in a new world indeed. The streets crowded with well-dressed people, who have all the appearance of health and affluence. Brydone
The Order still consists of eight lodges, or languages, one having been recently added to supply that of England. These are France, Auvergne, Provence, Italy, Spain, Portugal, Germany, and the newly-formed language called Anglo-Bavaria. For the establishment of this last, the Elector has appropriated the possessions of the Jesuits. (..) The different lodges are fine buildings, and add much to the beauty of the city.
Richard Colt Hoare - A classical tour through Italy in 1790
At Rhodes and Borgo the Knights had reserved a section of the town, known as Collachio, to themselves; at Valletta this section was not clearly identified, however five of the auberges, the palaces where the knights of each tongue met, were built in the south-western corner of the town between St. James' Cavalier and the Grand Masters Palace. Auberge of Italy was designed in 1574 by Cassar. 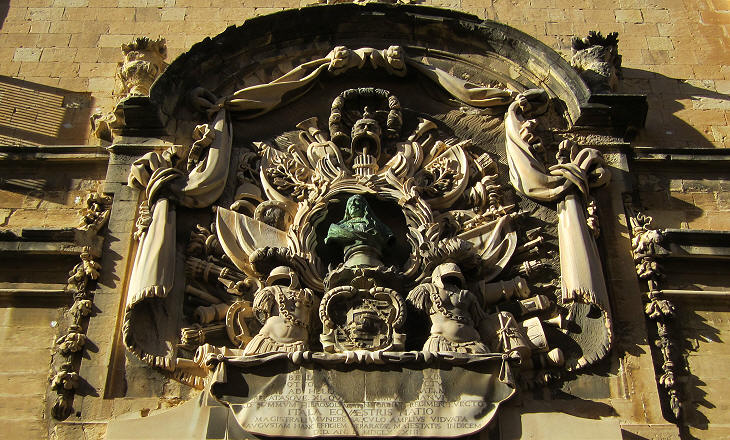 In 1683 the Auberge of Italy was enlarged by one additional storey; the event was celebrated by placing a gigantic relief housing a bronze bust of Grand Master Carafa. A few years earlier in 1675 Carlo Fontana, a renowned Roman architect, had designed a similar composition to celebrate the completion of Cottonera Lines, a large curtain of new walls built by Grand Master Nicolas Cottoner at Bormla. 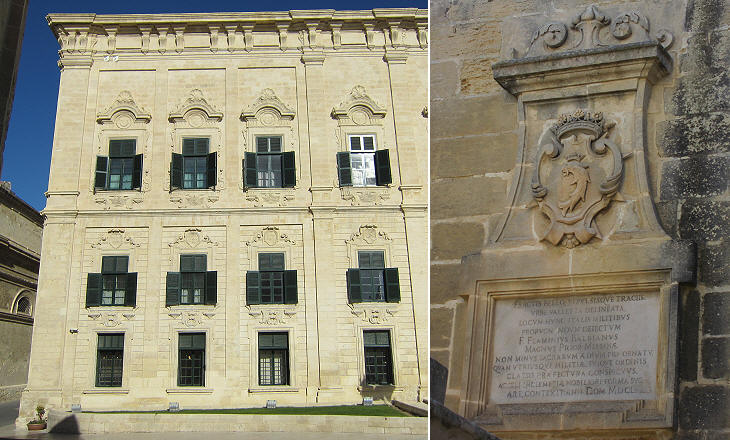 At Rhodes the auberges were rather austere buildings where the knights lived in compliance with their vows of celibacy, obedience and poverty and their aim of assisting the pilgrims and the sick. At Valletta the military aspect of the Order became the most prominent one and the auberges were turned into elegant palaces as occurred to Auberge of Castile after it was rebuilt by Grand Master Pinto in 1744.
By tradition the chief of the Italian tongue was the Admiral of the Maltese fleet; this explains why a fish was the symbol of the tongue. 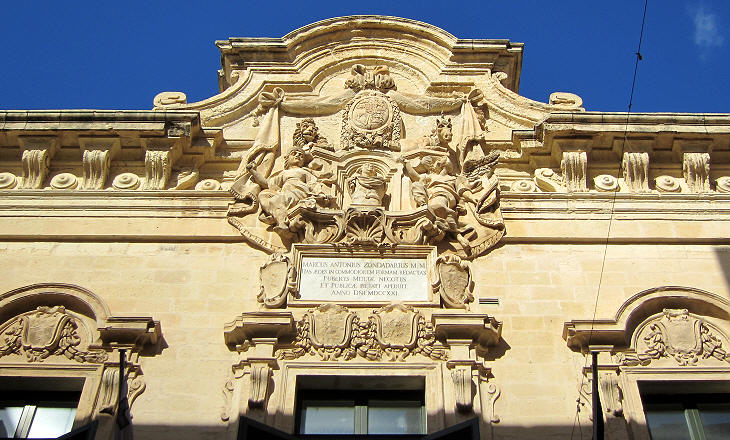 Banca Giuratale (see those at Mdina and Gozo): detail of the 1721 façade with the bust of Grand Master Zondadari and behind him the heraldic symbols and the coat of arms of the United Kingdom

The city of Valette, or the new city, is well built; the stones, which serve for the construction of the edifices, and for the pavement of the principal streets, are very soft when extracted from the quarry, hut they harden in the air; they are, at the same time, so uncommonly white that they dazzle the eyes, especially when they reflect the rays of a burning sun.
Charles Sigisbert Sonnini - Travels in Egypt in 1777.
When in 1530 the Knights were given Malta, the administration of the island was entrusted to a governor appointed by the Viceroy of Sicily who was assisted by four giurati, locally elected magistrates who took an oath (Ital. giuramento) at their appointment. The Grand Masters reduced the authorities of these elected magistrates, but they did not abolish them. The inscription says that the building served Publicis Melitae Negotiis et Publicae Pietati, so it was something between a Town Hall and a Monte di Pietà (Mount of Pity), a charitable institution from which people could borrow sums of money by pledging their valuables. 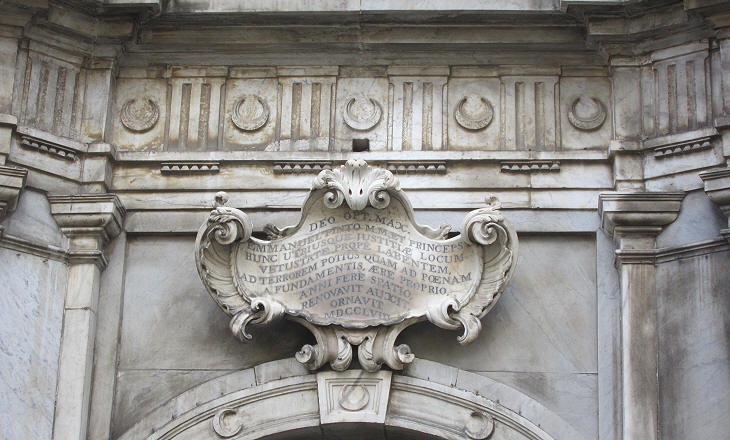 Castellania: detail of the 1768 entrance built by Grand Master Pinto

The Knights designated some of the buildings of Valletta with the names they had at Rhodes. The penal and civil court was housed at Castellania, because this was the name of the building having the same function at Rhodes. The jurisdiction of the Grand Master was often challenged by the Bishop of Malta or by the local Inquisitor. In some instances the popes themselves had to intervene to settle these disputes; an inscription at Our Lady of Victories celebrated a papal decision which favoured the Grand Master. 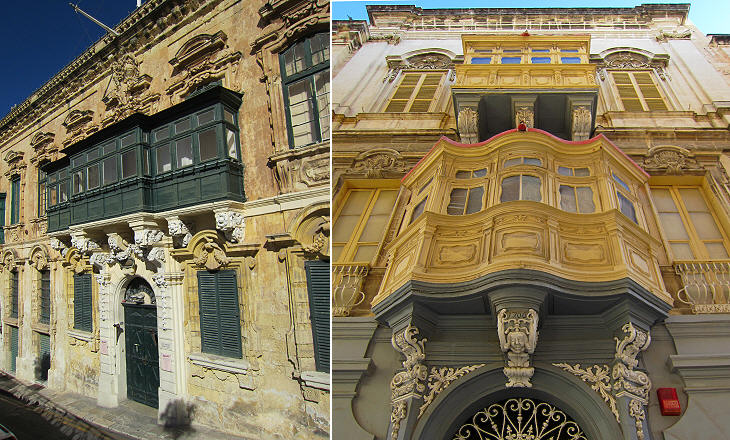 The houses are built, and the streets paved, with a white stone; the roofs are flat, and on each side is a footway. But the architecture and symmetry of the several houses are destroyed by heavy wooden balconies, projecting like excrescencies, and painted of a dingy hue, which ill accords with the colour of the stone. Colt Hoare
Gallarijas is the Maltese word which indicates the covered balconies which one can see on many residential buildings. They are the equivalent of Ottoman çikmas, windowed projecting parts of palaces (see those at Topkapi Sarayi).
Gallarijas are mainly XVIIIth/XIXth century additions to existing buildings as in the case of Verdelin Palace (or of Palazzo d'Aste in Rome). During the XIXth century new buildings were designed to include gallarijas. 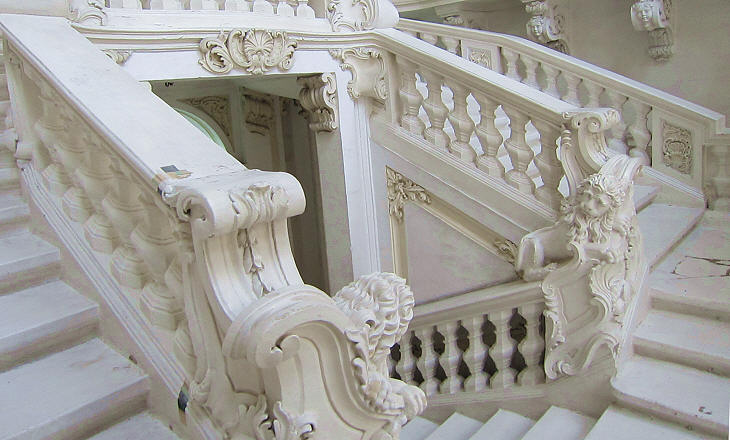 Detail of Sousa y Silva Palace, then Admiralty House and now housing The National Museum of Fine Arts (you may wish to see the grand staircase of the Palace of Caserta which was built in the same period)

The palace built by Fra Ramon de Sousa y Silva, a wealthy Portuguese knight in ca 1760 shows how much the Knights forgot their poverty vows during the XVIIIth century. Many of them built palaces in Valletta and villas in the countryside; their number decreased and the defence of the island was more and more entrusted to mercenary troops. 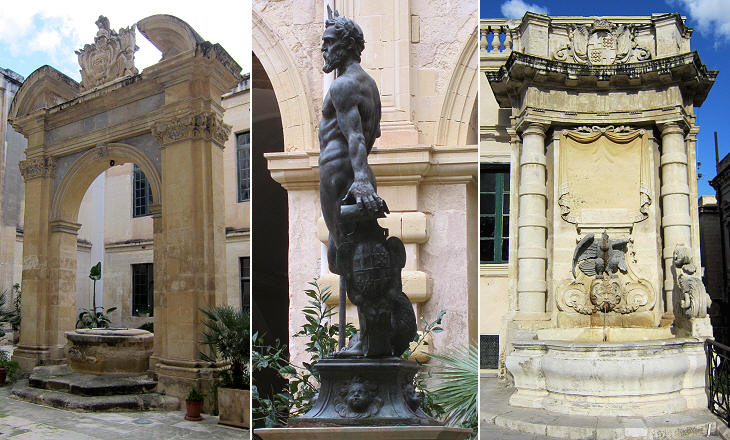 When Grand Master Valette decided to build a new town, his engineers verified that groundwater was available in the chosen location. Availability of water was critical in case of a long siege. Deep wells were excavated to reach the groundwater. In 1615 Grand Master Alof de Wignacourt ordered the construction of an aqueduct to provide the inhabitants of Valletta with an easier and wider access to water, but the wells were not dismantled.
A large fountain was built near Porta Marina, the (lost) sea gate of Valletta. A bronze statue of Neptune stood at its centre. Some sources attribute it to Giambologna, but it is more likely the work of one of his assistants, maybe Pietro Tacca who almost entirely devoted himself to bronze sculpture (see his works at Piazza della SS. Annunziata in Florence). In 1861 the fountain was disassembled; the basin was relocated to Floriana and the statue was placed in the Lower Courtyard of the Grand Masters Palace.

The image used as background for this page shows a coat of arms of Grand Master Carafa della Spina at Auberge of Italy.