- Other Monuments of Roman Capua
(Amphitheatre of Capua)

You may wish to see an introductory page to this section or a page on the Amphitheatre of Capua first. 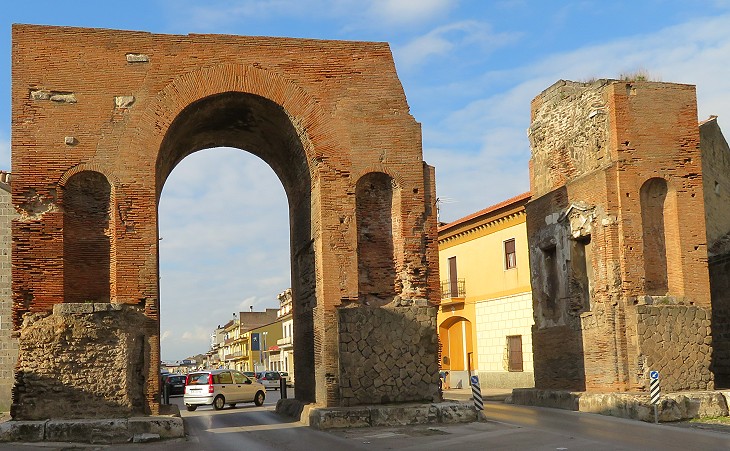 Arch of Hadrian across Via Appia at S. Maria Capua Vetere (Old)

At some distance from Aversa I turned to the right to view the remains of the ancient city of Capua; it was situated in the heart of the plain, two miles and a half from Modern Capua, and the river Volturno. A double arcade, supposed to be a gate, was the first piece of antiquity I observed; it is in a lighter taste than most ancient arches destined for such purposes, being higher in proportion to its breadth.
Henry Swinburne - Travels in the Two Sicilies. 1777-1780
At the distance of about three miles from modern Capua we recognize the splendid remains of the original city so renowned for its riches, luxuries and magnificence that it gained the title of Altera Roma or second Rome; the great fertility of its soil has doubtless contributed to the dilapidation of its ancient structures, but many noble buildings, both public and private, have escaped the injuries of time and exist as testimonies of its former prosperity. The first that occurs is a triumphal arch built with brick through which the traveller still passes.
Sir Richard Colt Hoare - A Classical Tour through Italy and Sicily - Journey from Rome to Beneventum on the Appian Way in 1789 - 1819 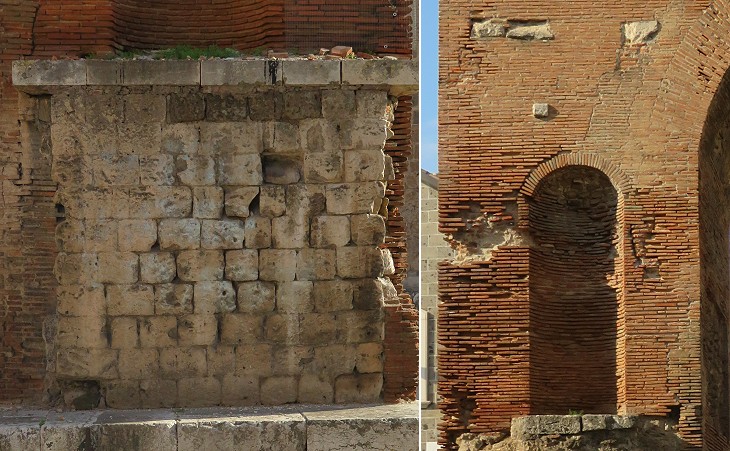 Details of the arch

The arch was also known as Arco Felice because Colonia Iulia Felix Augusta Capua was the official name of Roman Capua. The reference to Emperor Hadrian is based on an inscription found in the XVIIIth century, but today its being original is challenged and the arch is thought to have been built by an emperor of the Flavian dynasty. It had a third passage to the north of the existing ones and we can assume it was faced with marble and decorated with reliefs and statues, all lost together with the dedicatory inscription. The arch most likely marked the western limit of the ancient town. 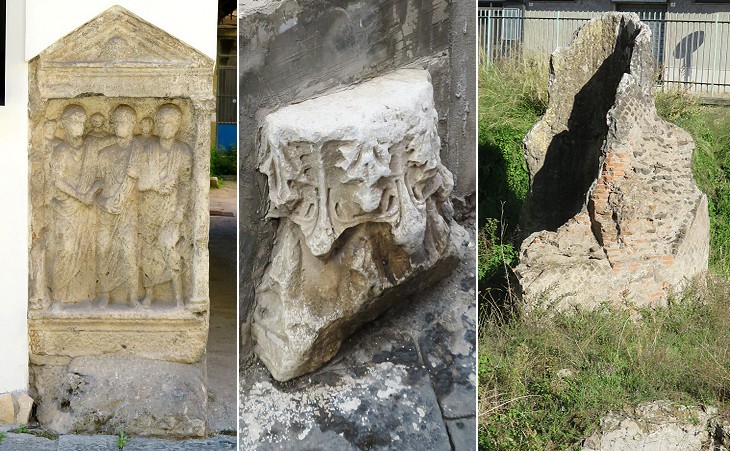 Genseric the Vandal massacred the inhabitants, and burnt the town to the ground. (..) In 841 it was totally destroyed by an army of Saracens, and the inhabitants driven into the mountains. Some time after the retreat of these savage invaders, the Lombards of Benevento ventured down again into the plain, but not deeming their force adequate to the defence of so large a circuit as the old city, they built themselves a smaller one on the river, and called it Capua. They chose the site of Casilinum, famous in the Second Punic war for the resistance made by its garrison against Hannibal. Since the foundation of the new city old Capua has remained in ruins. Santa Maria di Capua (..) now occupies part of the spacious enclosure of the city, which was the centre from whence the Viae Appia, Latina, Domitia, and others branched off towards different provinces of Italy. Swinburne 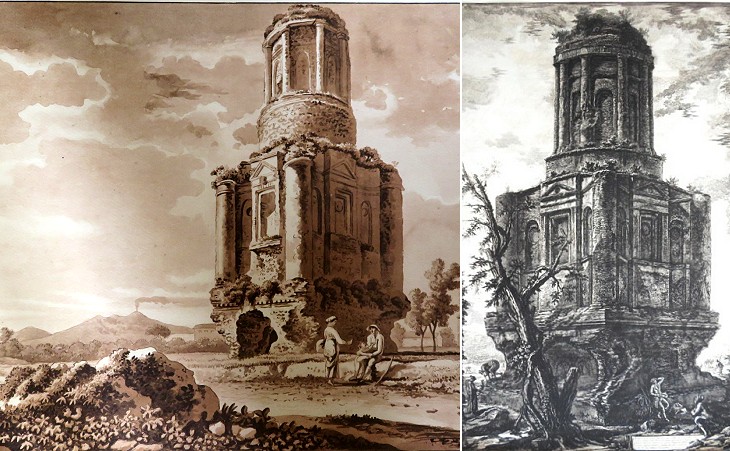 (left) The Conocchia in an engraving by Carlo Labruzzi, a Roman painter who accompanied Sir Richard Colt Hoare in his 1789 journey to Benevento. He showed Mt. Vesuvius in the background; (right) 1776 engraving by Giovanni Battista Piranesi which was included in his "Views of Rome"

Along the edges of these roads the ancients buried their dead in magnificent mausolea, a few of which yet standing point out the direction of the highways. The Conocchia, a vulgar name given to one of these monuments from a supposed resemblance with a distaff, is the handsomest, and consists of a cupola, surrounded with columns placed upon a square tower. Swinburne 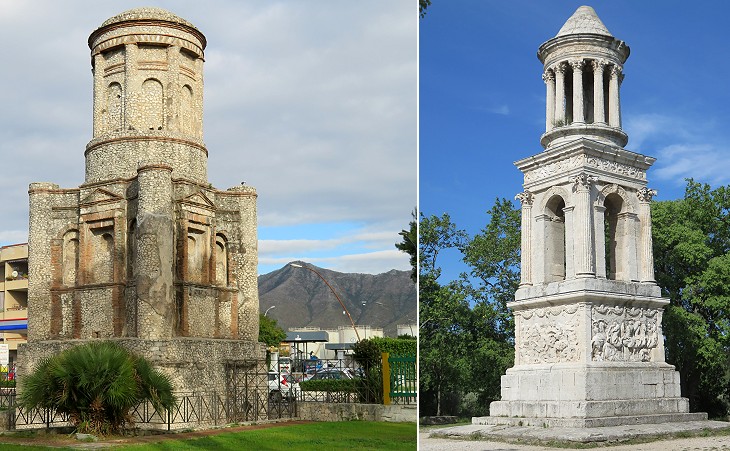 (left) The Conocchia and Mount Tifata in the distance; (right) Roman mausoleum at Glanum, near St. Rémy de Provence in France

Of late years S. Maria has had a revival, chiefly owing to its having a small trade in leather.
Augustus J. C. Hare - Cities of Southern Italy and Sicily - 1891
A small village in the XVIIIth century, today S. Maria Capua Vetere is a town larger than Capua. It houses the tribunals having jurisdiction on the whole province of Caserta, a nearby town where in 1752 King Charles of Bourbon decided to build a gigantic royal palace. The Conocchia stands on the section of Via Appia between S. Maria and Caserta, which today is a very busy road and spoils the ancient monument of the evocative surroundings shown in XVIIIth century views.
The mausoleum is usually dated late Ist century BC. In 1792 it was repaired and some minor changes were made to its external appearance. We can assume it was decorated with reliefs and columns, similar to what can be seen in other Roman mausoleums having approximately the same design. 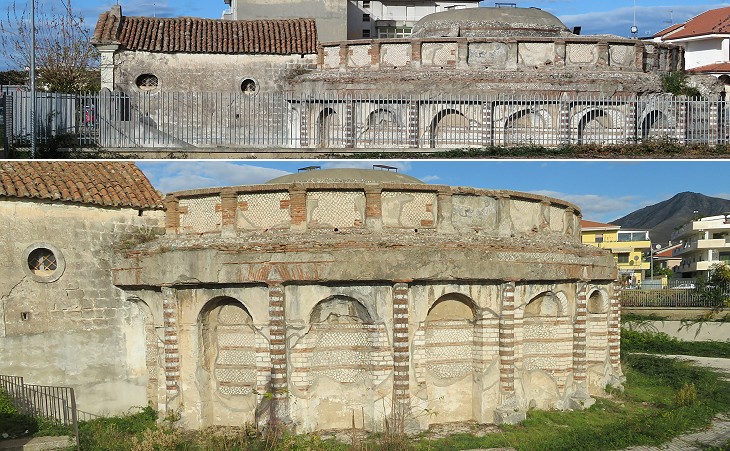 Carceri Vecchie (Old Prisons); the image used as background for this page shows the building in a 1475 drawing by Giuliano da Sangallo

Another ancient monument which attracted the attention of travellers is located very near the Conocchia. It owes its name to the wrong assumption that it was used as a jail for gladiators. It is dated Ist century AD and it was the mausoleum of a very important family of Capua, although the lack of inscriptions does not allow a more precise identification of its owners. It was accessed from Via Appia, but the entrance was destroyed in the early XIXth century by the construction of a small chapel. Cinerary urns were placed in an underground room and the hall above it housed the periodical ceremonies which were held in remembrance of the dead (see a page on Roman funerary rites). Circular mausoleums were common in many ancient civilizations from the Mycenaean to the Etruscan one and Emperor Augustus arranged for his cinerary urn to be placed in an imposing circular mausoleum. Monte Orlando near Gaeta houses the Mausoleum of L. Munatius Plancus, a very fine example of such monuments. 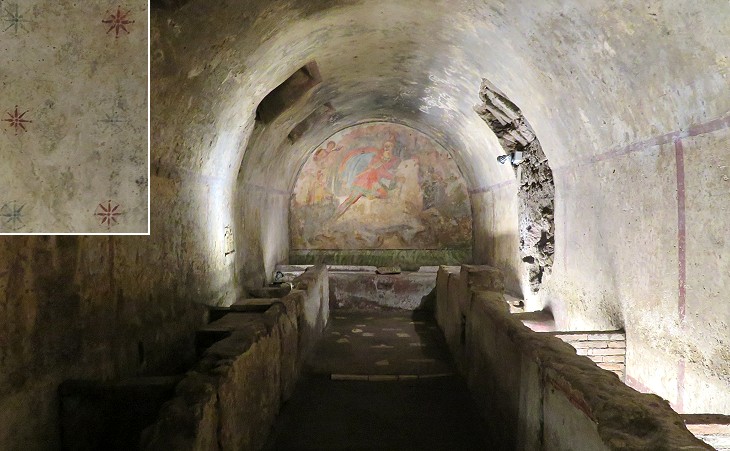 Mithraeum; (inset) detail of the decoration of the ceiling

In 1922, when laying the foundations of a new building, workmen discovered another monument of ancient Capua. It was an underground hall where worshippers of Mithra gathered for their ceremonies. This religion was not a clandestine one, but it was reserved to initiates who preferred to meet in small groups, something which brings to mind a Masonic lodge. The hall had to resemble a cavern, because it was in a cavern that Mithra killed the Bull, the key event of this belief. Notwithstanding its secrecy the cult of Mithra spread to many parts of the Roman Empire in the IInd and IIIrd centuries AD. It was very popular among soldiers (see a relief found at Nida, today's Frankfurt, a mainly military Roman settlement on the Germanic frontier), but the presence of nine mithraea at Ostia shows that it appealed also to other sections of the Roman society. 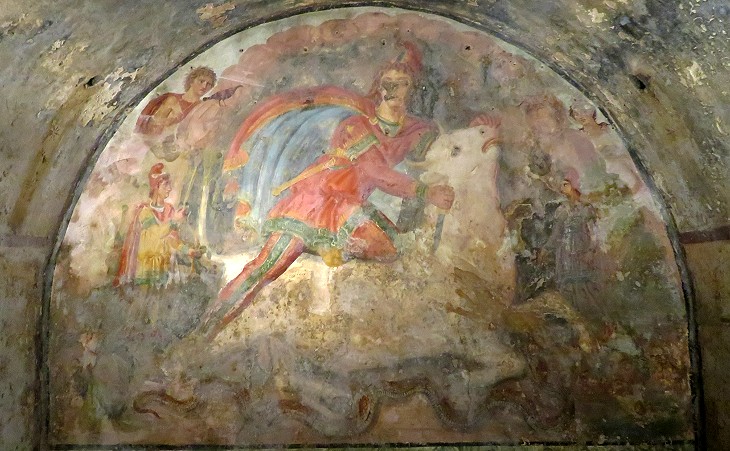 The mithraeum of Capua, similar to Mitreo Barberini in Rome, was decorated with a fresco depicting the killing of the Bull (or most likely the Taurus constellation). In most other mithraea the episode was depicted in a relief (as at S. Prisca) or less frequently by statues (as at Mitreo del Mitra at Ostia). All these depictions are very consistent and they include references to the Sun and the Moon, to a number of other animals (or constellations) and to the initiation grades (e.g. a raven) of the worshippers. The side walls of this mithraeum were decorated with other (very worn out) frescoes which illustrated ceremonies of initiation. 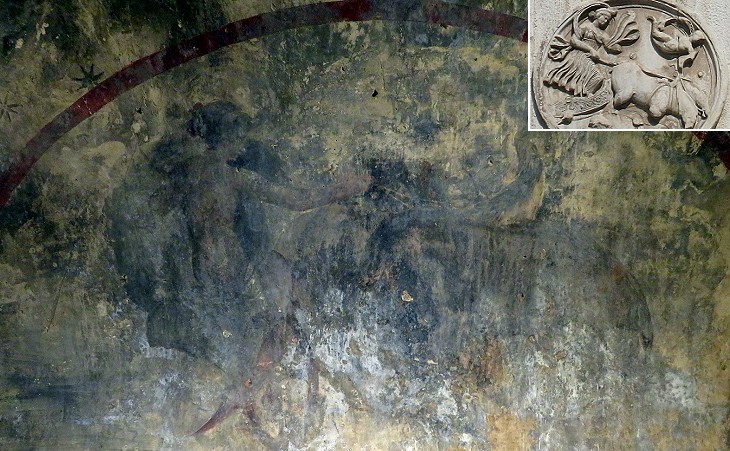 Mithraeum: Moon riding a chariot; (inset) the same subject in a relief of Arco di Costantino in Rome

The wall at the other end of the mithraeum was decorated with a fresco depicting the Moon riding a chariot driven by a black and a white horse. The Moon turns her back to the viewer so she is probably about to disappear, similar to what can be seen in a relief in Rome where she enters the ocean. 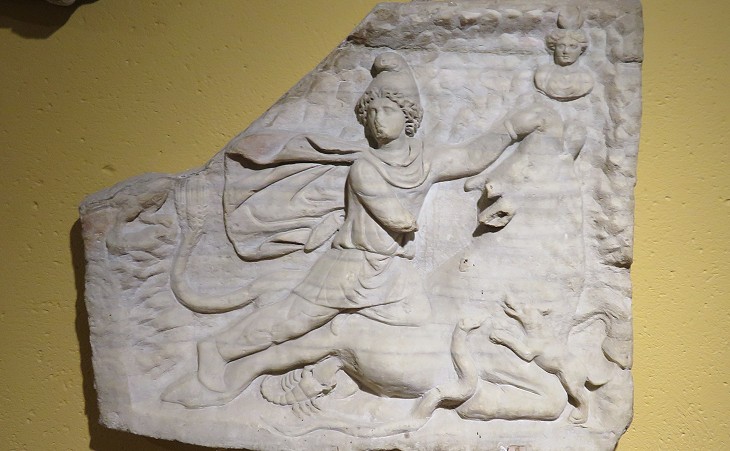 Brussels Art & History Museum: relief depicting Mithra and the Moon in the upper right corner; it was found in the environs of Naples

The Moon was not given such a relevance in the other mithraea, although she was often depicted in the main fresco or relief. 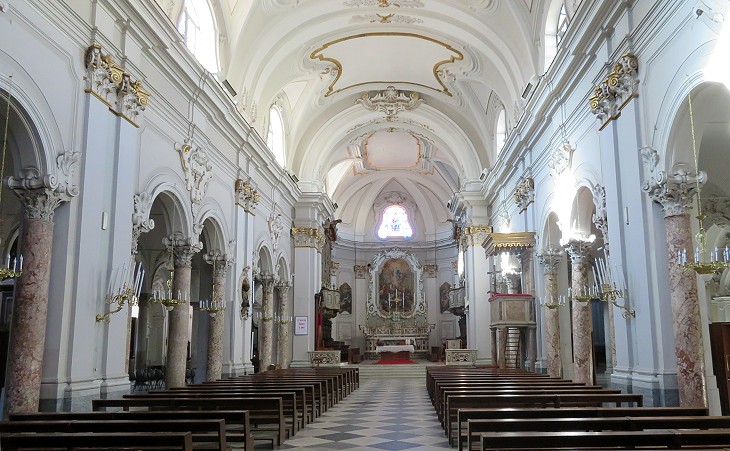 Capua was an important bishopric see and its first (lost) cathedral was built at the time of Emperor Constantine. After the destructions caused by the Vandals and by the Greek-Gothic War, the church of S. Maria Maggiore became the new cathedral. It was built making use of columns taken from the amphitheatre and other ancient monuments. Its current aspect is due to series of modifications, the last of which occurred in the XVIIIth century. Originally the building was preceded by an atrium which was eventually incorporated into the main nave. 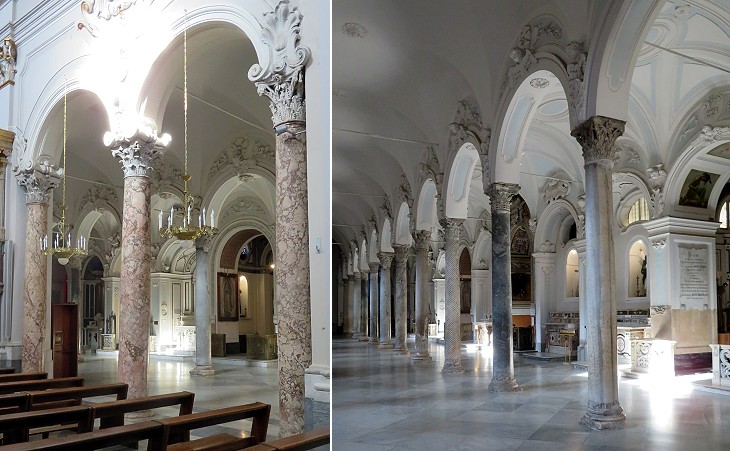 Ancient columns: (left) in the main nave; (right) in the side naves

At the time when the church was built many ancient columns were available and the finest ones were utilized for the main nave; they most likely came from the same building because of their identical size and stone. Other columns had different origin; overall they provide the viewer with a good catalogue of the stones which decorated Capua (and Rome). 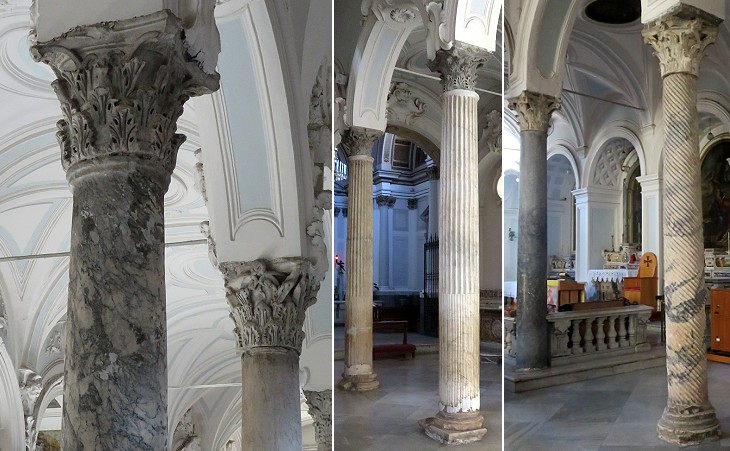 Details of ancient columns and capitals in the Cathedral

In the IXth century the cathedral was moved to New Capua, however the bishops maintained a summer residence in their old palace adjoining S. Maria Maggiore and the church with its precious contents of ancient columns and capitals was not abandoned. The old town was called Villa S. Maria Maggiore until 1862 when a reference to Capua Vetere was introduced, hence S. Maria Capua Vetere. 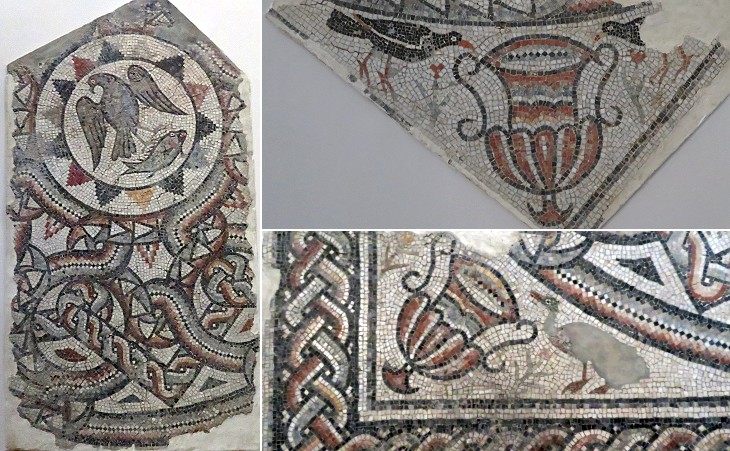 Early Christian mosaics from the first baptistery of the church

Baptism had a great importance for the early Christians. Very often it was administered in separate buildings, rather than in a chapel of a church. S. Maria Maggiore retains some mosaics of its lost baptistery; their subjects are similar to those found in Aquileia, another important Roman town of Italy which was eventually abandoned. 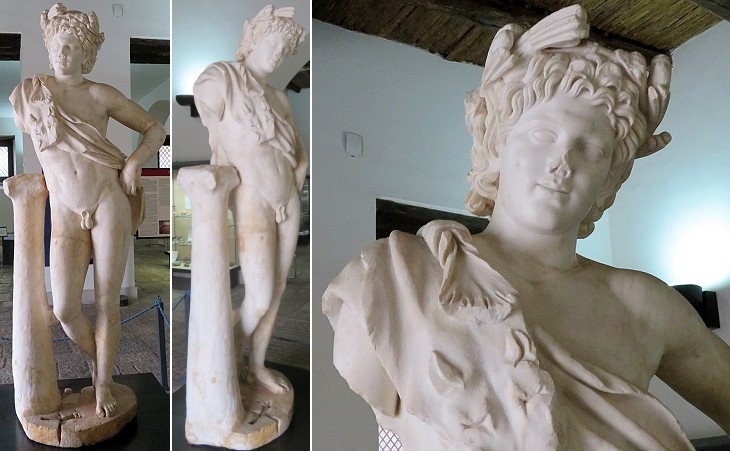 The finest works of art which were found in the ruins of ancient Capua were moved to the Museum of Campania at (New) Capua or to the Archaeological Museum of Naples or sold abroad. In 2002 a very fine statue was found during chance excavations and it was decided to keep it in the small museum of S. Maria Capua Vetere. It is one of many Roman copies of a bronze statue attributed to Praxiteles, a IVth century BC Greek sculptor. A bronze statue of a resting satyr, but in a different pose, was found in Herculaneum.