S. Prisca
(Vasi at work in the Grand View of Rome) 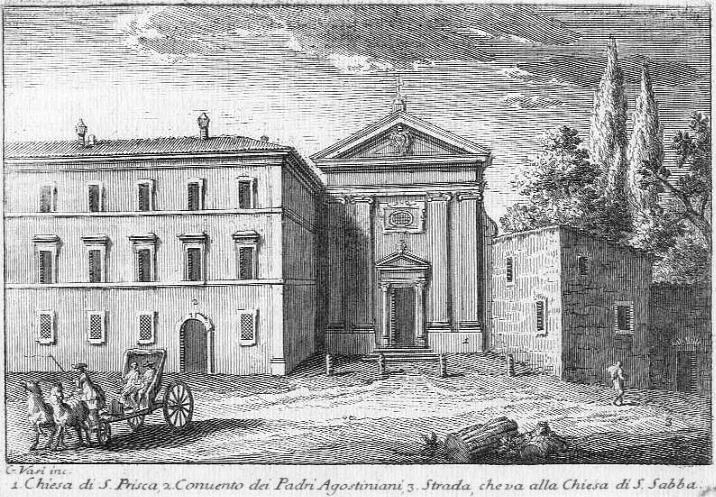 In the XVIIIth century the Aventine Hill had a rather rural appearance and this is evident in this 1753 etching by Giuseppe Vasi; two ancient Roman aqueducts which provided the hill with an ample supply of water were not rebuilt by the popes and so the Aventine was very scarcely populated; apart from medieval monasteries (S. Saba, S. Sabina and S. Alessio in addition to S. Prisca) there were only farms and Ortaccio degli Ebrei, the Jewish cemetery.
The view is taken from the green dot in the small 1748 map here below. In the description below the plate Vasi made reference to: 1) S. Prisca; 2) Augustinian monastery adjoining the church; 3) Street leading to S. Saba. The small map shows also 4) Ortaccio degli Ebrei and 5) Vigna Maccarani Torlonia. 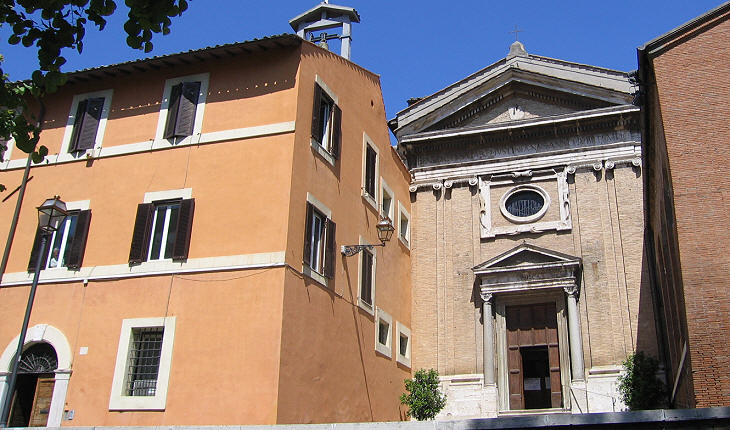 The farms have been replaced by a residential development, but the almost total absence of shops and the limited impact of traffic keep this neighbourhood away from the congestion of other parts of today's Rome.
S. Prisca has lost the coat of arms of Pope Clement VIII on the tympanum; the frames of the monastery windows have been simplified. Apart from these minor modifications the view has not changed. 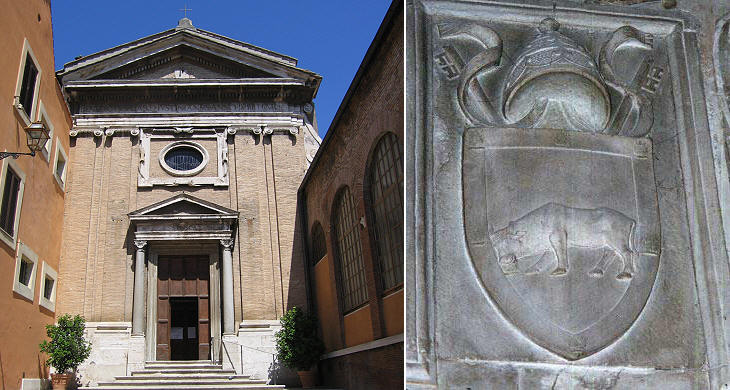 According to tradition Prisca was a young girl who was baptized by St. Peter; she was sentenced to death in the circus by Emperor Claudius, but the lions refused to touch her and she was eventually beheaded.
A IIIrd century small oratory, probably dedicated to Prisca, was unearthed in 1776 in the proximity of the current church which was built in the Vth century.
In the XVth century a fire destroyed the first three bays of the church. A lengthy inscription and a coat of arms celebrate the repairs made by Pope Calixtus III in 1456, but the building remained shortened, an indication of the reduced importance of the area. 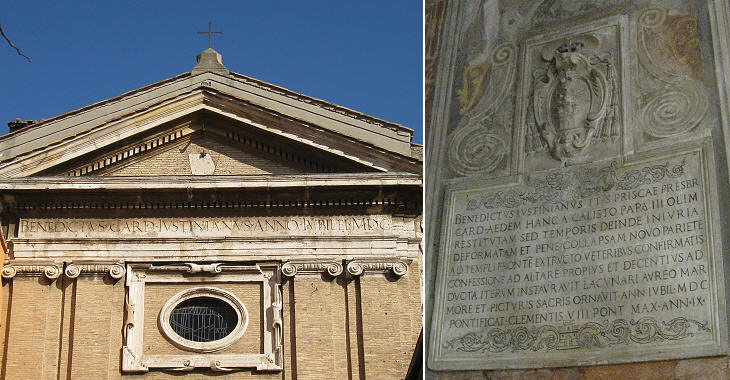 (left) Detail of the façade showing a 1600 inscription celebrating a restoration by Cardinal Benedetto Giustiniani; (right) inscription and coat of arms of the said cardinal

Cardinal Benedetto Giustiniani belonged to a family of Genoese origin, but he was born in Scio (today Chios), an island of the Aegean Sea which was ruled by his family. When the Ottomans occupied the island in 1566 the Giustiniani came to live in Rome and owing to their wealth they soon became one of the most important families of the city. Cardinal Benedetto Giustiniani commissioned Carlo Lambardi a new façade for S. Prisca and he restored the whole building. He and his brother Vincenzo assembled in their Roman palace an important art collection. You may wish to see the church as it appeared in a 1588 Guide to Rome. 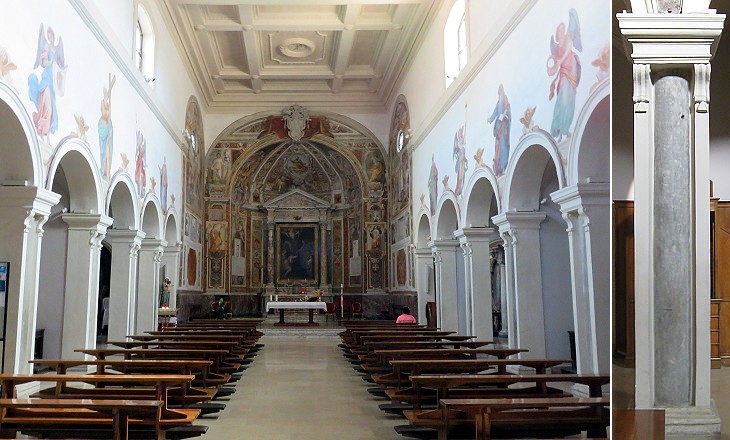 In the XVIIIth century Pope Clement XII promoted a new restoration of the church; notwithstanding the many changes that occurred throughout the centuries S. Prisca retains its original design: it has the shape of an ancient Roman basilica i.e. a large rectangular hall with two rows of columns dividing it into three naves with an apse at its end. 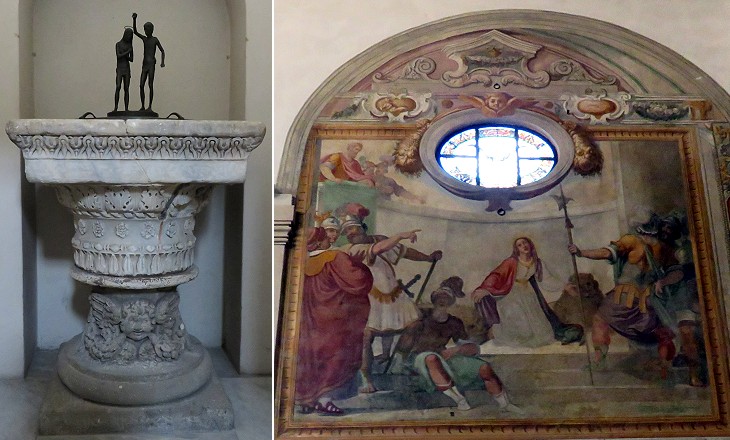 (left) IInd century AD capital which according to tradition was used as a baptismal font by St. Peter; (right) Martyrdom of S. Prisca by Anastasio Fontebuoni (early XVIIth century) on a side wall 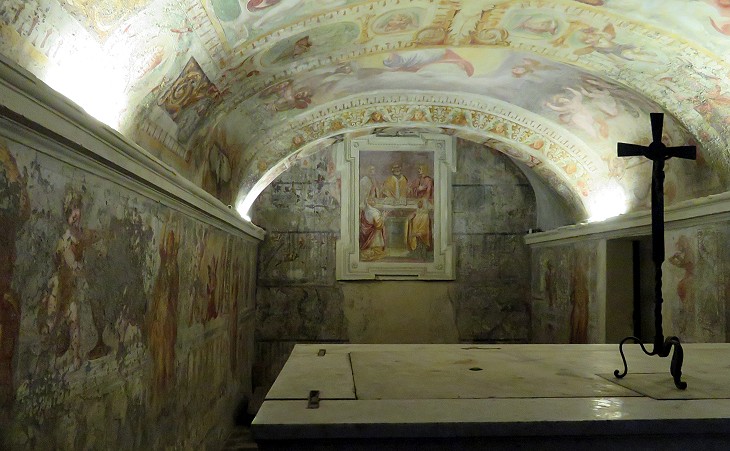 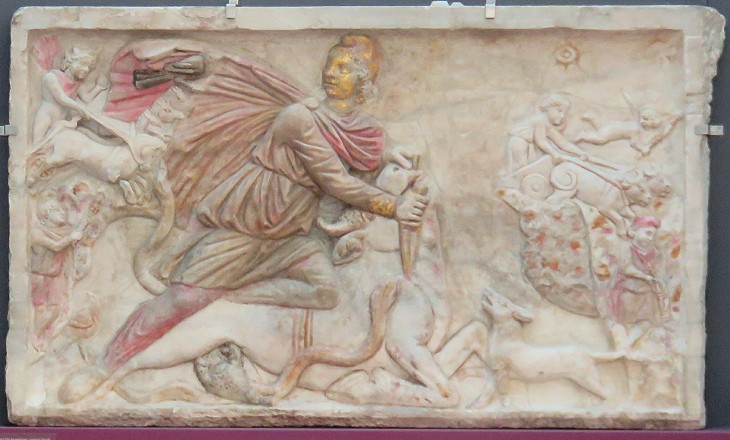 Relief portraying Mithra killing the Bull which was found in a mithraeum underneath S. Stefano Rotondo

In 1933 excavations were made to strengthen the foundations of S. Prisca, but they were increased in scope when parts of an ancient Roman house were discovered; they included a mithraeum, an underground hall for the worship of Mithra. Archaeologists found evidence that it was built before 202 AD (during the reign of Emperor Septimius Severus), an indication of when this oriental belief spread into the Roman upper classes (at that time the Aventine was the residence of wealthy families).

Detail of another relief from a "mithraeum" showing a scorpion and a snake biting the bull while a dog licks its blood (at Museo di Villa Giulia); the image used as background for this page shows another detail of this relief; for yet another detail see a page on S. Clemente

In most mithraea archaeologists have found a relief (or a statue as at Ostia) on a small altar at the end of a narrow hall resembling a grotto; almost all of them portray Mithra in the act of killing a bull and surrounded by other animals and human beings. It is generally thought that the animals represent constellations: the bull indicates that of Taurus, the dog Canis Minor, the snake Hydra and the scorpion Scorpio. These constellations, together with that of Corvus (raven, shown in another section of this relief), were all aligned with the celestial equator during the spring equinox in that period. The spring equinox was a major festivity in ancient Persia, the country where the worship of Mithra originated.
In the late IInd century AD the Greco-Roman world began to move from the worship of the twelve gods sitting on Mount Olympus to that of a supreme deity (Mithra or Sol Invictus or even Hercules). 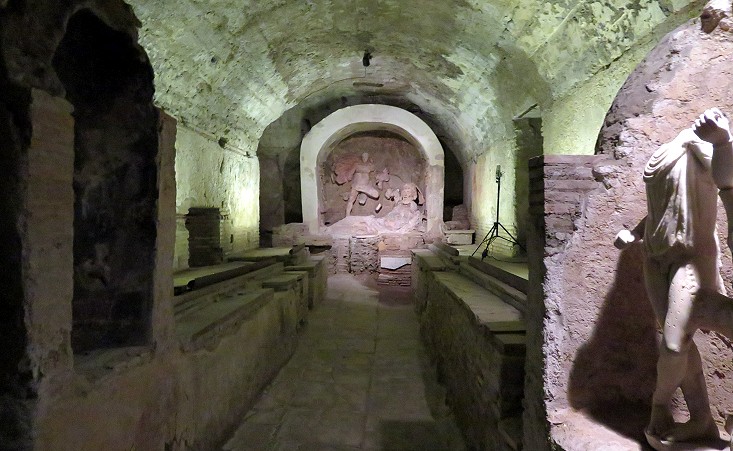 Cautes and Cautopates are not two minor deities, but assistants of Mithra. Cautes holds a torch upwards and Cautopates downwards. The latter could be a symbol of death as depicted in many sarcophagi, e.g. at Burdur, but the two torchbearers are thought to be symbols of: a) the rising and the falling sun; b) the constellation of Gemini and thus the summer solstice; c) the spring and autumn equinoxes. 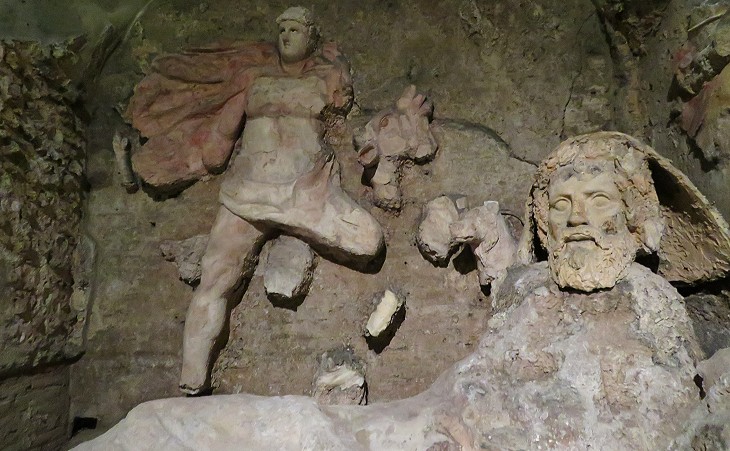 The relief at S. Prisca is very different from those found elsewhere. Mithra is not represented as a fully dressed Persian or Phrygian man, but as a naked Greek hero. The general opinion is that an available statue of Apollo was used to minimize costs, but it is also possible that the members of that Mithraic community were still linked to the traditional way of portraying gods. In the foreground a large recumbent statue partially hides the scene behind. The body is roughly made up of pieces of jars, while the stucco head is carefully worked out. It may represent Saturn, the farthest known planet from Earth and a symbol of Pater, the seventh and highest grade of the Mithraic initiation ladder. 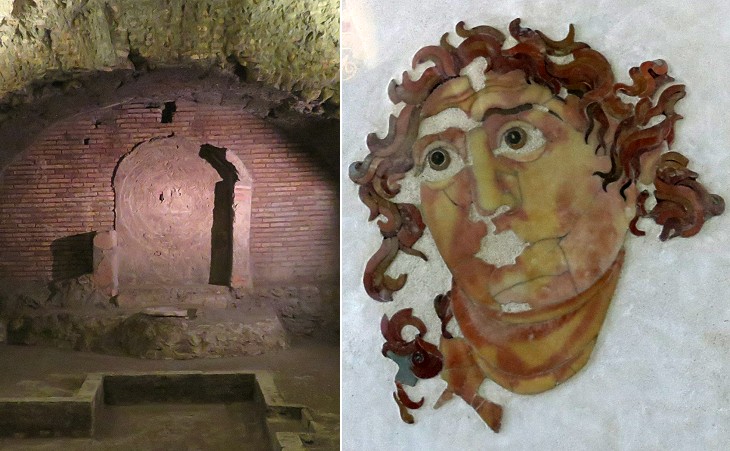 Archaeologists discovered some rooms adjoining the main one; most likely they were used for ceremonies such as the acceptance of new initiates and their promotion to higher grades. A fresco found at Mitreo Barberini shows scenes of these ceremonies, which seem to have included a sort of baptism.
In one of the rooms a niche housed a fine and dramatic representation of Sol Invictus, the object of a cult which had points in common with that of Mithra, the chariot of the Sun being depicted in many reliefs. 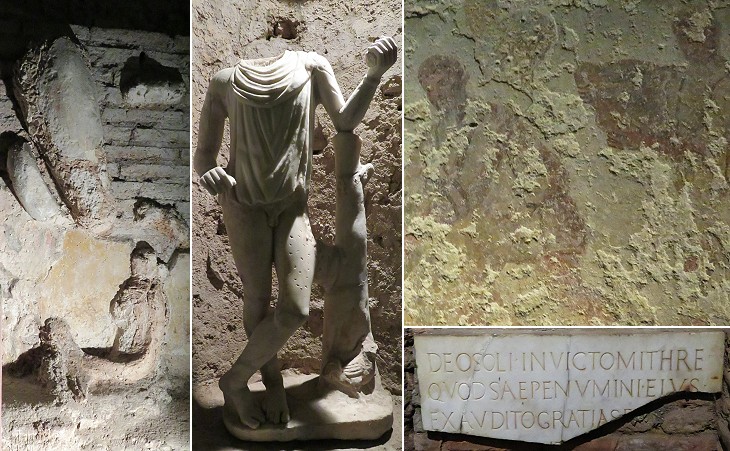 (left) Fragments of a statue of a Leontocephalus; (centre) Cautopates, possibly a modified small copy of a statue of Hermes by Praxiteles; (right-above) fresco depicting the procession leading the bull to the sacrifice; (right-below) votive inscription to Mithra/Sol Invictus

Did not Gracchus, whose name betokens his patrician origin, when a few years back he held the prefecture of the City, overthrow, break in pieces, and shake to pieces the grotto of Mithra and all the dreadful images therein? Those I mean by which the worshippers were initiated as Raven, Bridegroom, Soldier, Lion, Perseus, Sun, and Father.
Letters of St. Jerome - Letter 107 - Translated by W.H. Fremantle, G. Lewis and W.G. Martley.
The quotation shows the hostility of the Christians towards the cult of Mithra; it describes an event which occurred in 376 AD, when the cult of Mithra was still officially tolerated. It is not likely St. Jerome actually referred to Mitreo di S. Prisca, but the frescoes which covered the walls of the main hall were clearly damaged on purpose by Christians. A few small sections are still visible and with them very minute words indicating the rank of some believers who were portrayed in different postures. 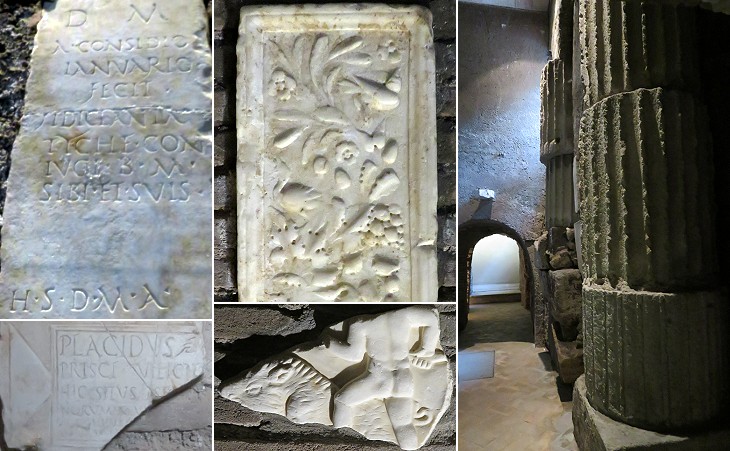 Funerary inscriptions, reliefs and parts of columns which were found in the Roman house

The Roman house where the mithraeum was established was built at the end of the Ist century AD by using parts of columns taken from other buildings, most likely small abandoned temples. A number of fragments of reliefs and of gravestones were found during the excavation campaign. A funerary inscription shows the wide use of acronyms by the Romans: H(uic) S(epulcro) D(olus) M(alus) A(besto), i.e. "This tomb should be free of deliberate damage" (see another acronym on a funerary inscription). 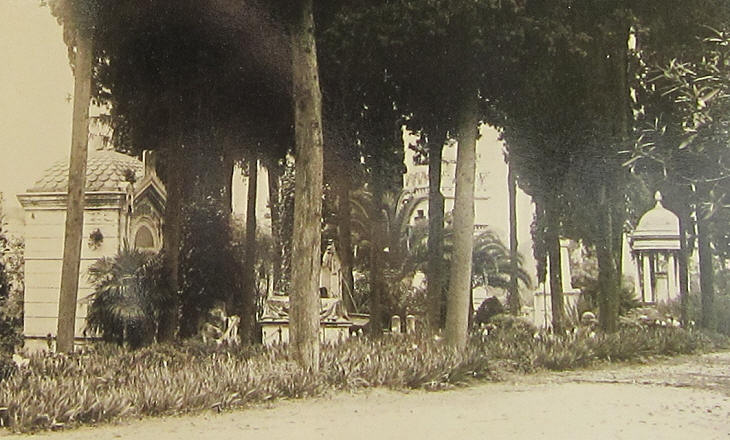 The Jewish Cemetery in ca 1930

The Jews of Rome had their cemetery near Porta Portese; when Pope Urban VIII built the new walls of Trastevere the cemetery was expropriated because it stood on the path of the new fortifications; in 1645 the Jews were allowed to bury their dead in a piece of land on the northern slope of the Aventine, not far from the Ghetto, where in 1556 they had been forced to live. 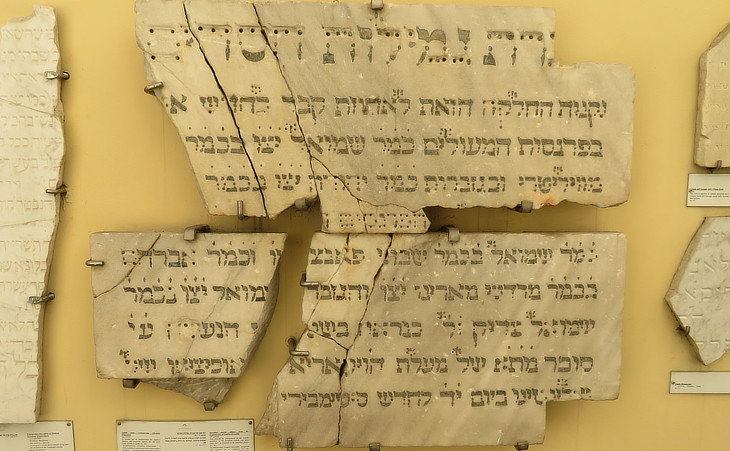 Charitable activities were performed by brotherhoods within the Jewish community. One of them, similar to Congregazione di S. Maria dell'Orazione e Morte was in charge of the management of the cemetery and of assisting the sick and the poor in their last days and providing them with a proper burial. 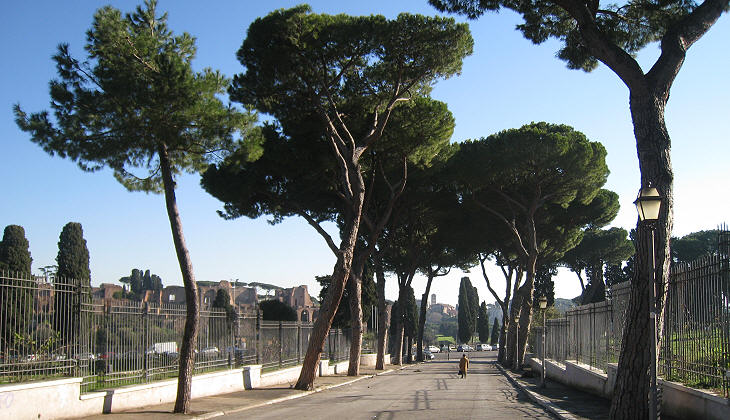 View of the street between the two sections of the Rose Garden of Rome (in the background: the ruins of the imperial palaces, the cypresses of Circus Maximus and the bell tower of SS. Giovanni e Paolo)

In 1895 the Jewish Community was assigned a space inside Cimitero del Verano and eventually in 1934 the remains of those buried in Ortaccio degli Ebrei were relocated there. The whole area around Circus Maximus was redesigned and the old cemetery became a public rose garden. 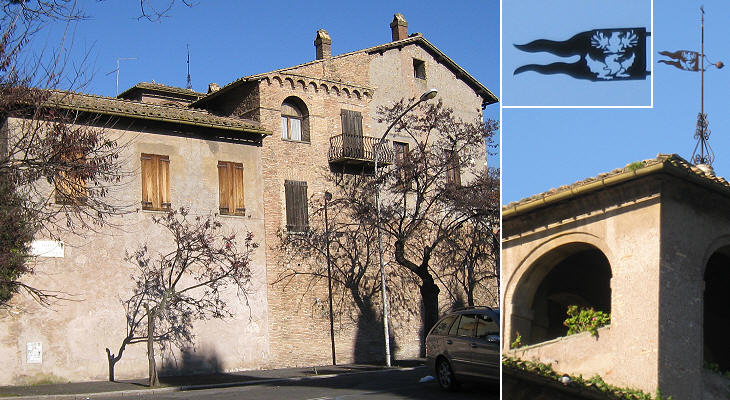 (left) Casino Maccarani Torlonia; (right) loggia and weathervane with the heraldic symbols of the Borghese, the family of Pope Paul V

Apart from the monasteries and the churches, very few other buildings of the Aventine are old; the farmhouse of Vigna Maccarani Torlonia has not been replaced by a modern development, because its garden and the building itself retain some ruins of the baths built by Emperor Decius in the middle of the IIIrd century AD. 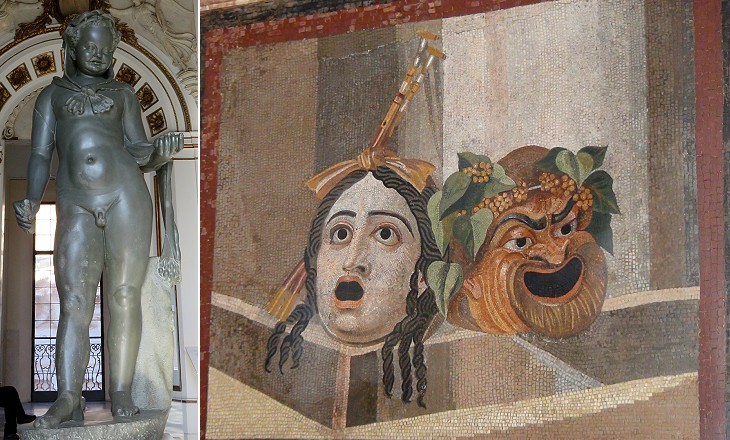 Hercules Aventinus standing, with Apples in his Left-hand, and his Right holds something which is broke; by what remains it may be the end of a Club, or part of a Bow. He is cloathed with a Lyon's Skin; very Young, Short, and Fat; but a very Noble Style.
Jonathan and Jonathan Richardson - Account of Some of the Statues, etc. in Italy - 1722
The baths were built on the site of a previous luxury private residence, perhaps that of Emperor Trajan. This explains why some very fine mosaics of the IInd century AD were found in the presumable area of the baths, which we know were still used in the Vth century. You may wish to see similar mosaics at Pompeii. 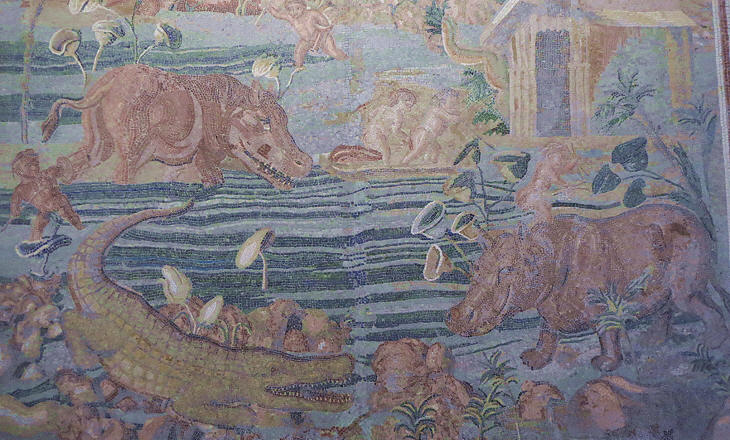