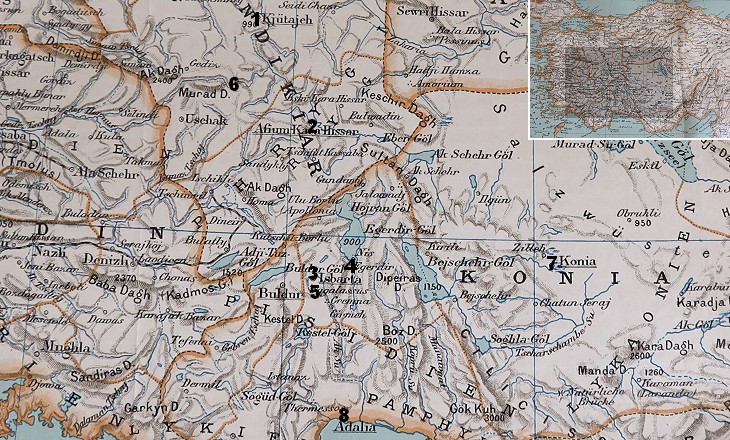 Phrygia Parorius from the mountains of that name, which run across it from east to west: On the north side of them was Philomelium, which I take to have been at Sparta; on the south was Antioch of Pisidia, which probably was at Bourdour, where there are great ruins; it is twelve miles from Sparta in the way to Satalia.
Richard Pococke - A Description of the East and Some Other Countries - 1745
The sites covered in this section are situated in a region which today is known as the Turkish Lake District because of its many endorheic lakes, bodies of water that do not flow into the sea because they are surrounded by mountain ranges. With reference to ancient geography the region was divided into Phrygia (northern section) and Pisidia (southern section). Lake Acigol in the district of Afyonkarahisar (you may wish to see Tuzla Golu, a large salt lake near Kayseri or a "chott" in Algeria)

The lake of Chardak, sometimes called Hadji Tous Ghieul (Acigol), appeared about ten miles off to the SW. (..) A nearer approach showed that only a small portion of its bed was really under water, the rest being soft mud covered with a thick saline incrustation. (..) A steep and partly wooded range of hills rose to a considerable height on the other side of the lake forming the southern boundary of the province of Phrygia and extending from the Taurus to Mount Cadmus. (..) After passing a hill we halted near the extremity of the lake to observe the process of collecting the salt at which the inhabitants of the neighbouring village were busily employed. The lake being nearly dry, the water in the centre is so thoroughly saturated that, owing to the great evaporation constantly going on, the salt crystallizes on the surface and is scraped off with large wooden spades.
William Hamilton - Researches in Asia Minor, Pontus and Armenia - 1842
Today the lake is exploited for its sodium sulphate; the process for collecting it is no longer that described by Hamilton, but, excluding the area where it is carried out, the view is not very different from that of the past. 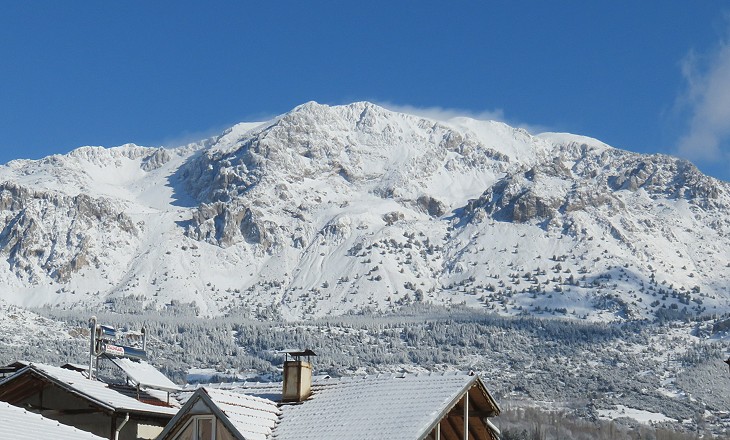 Mount Akdag (White Mountain - not the only mountain of the region by this name) seen from the small town of Aglasun near Sagalassos (January 6, 2015)

The recollection of my snow adventures in 1826 were so lively, that we determined on the present occasion (November 1833) to be more prudent, and not to run the risk of being buried in the snows of Mount Taurus, for the sake of saving an hour or two of distance; and accordingly set out to take the longer but safer road (to Aglasun), of eight hours, by the plain.
Francis Vyvyan Jago Arundell - Discoveries in Asia Minor - 1834
A picturesque ride of two miles (from Sagalassos) brought me to Allahsun where I was most hospitably entertained in the konak (residence) of the absent Agha (governor) and received a message from the mistress of the harem to say that I was welcome to remain there all night. Hamilton
Mt. Akdag is regarded as the westernmost peak of the Taurus Mountains, a long range which separates the Anatolian tableland from the Mediterranean Sea coastal plains. Sagalassos was an important town of Pisidia and it was situated at an altitude of 1,500m/5,000ft (and more) on the southern side of this mountain. 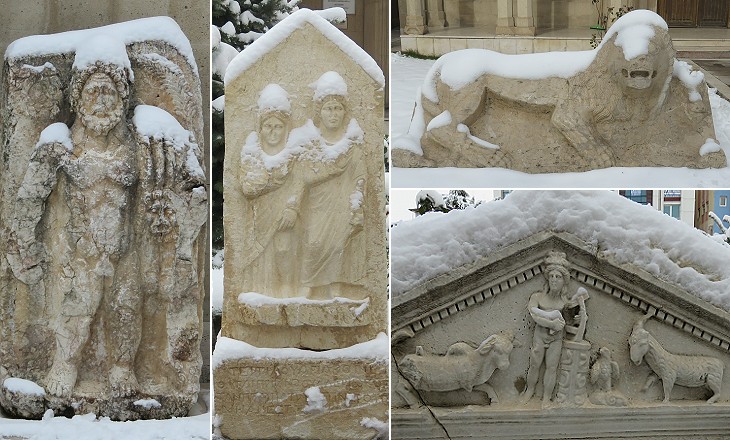 Burdur is the capital of a vilayet (one of 81 provinces of Turkey) which includes many towns of ancient Pisidia and its archaeological museum houses the works of art found there. It was recently renovated to properly display some fine statues found at Sagalassos. Because of lack of space many reliefs and gravestones were moved to a small garden near the entrance. I could not avoid shivering for Hercules and Apollo standing naked in the snow. 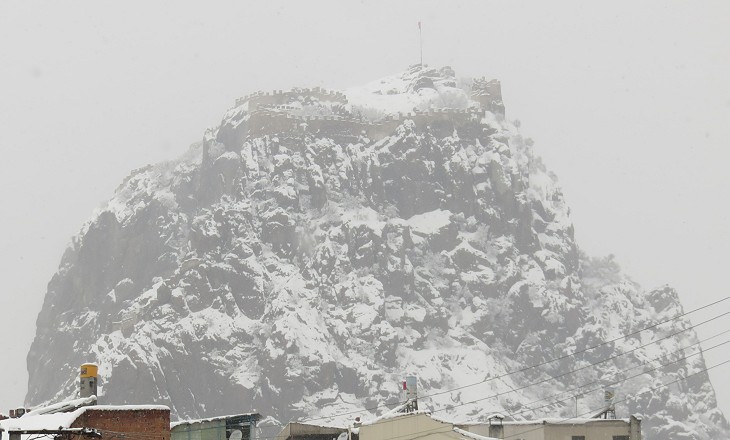 (March 31st - on his way to Aglasun) I have never experienced such cutting cold, nor so strong a wind, as in this pass of the Taurus range; neither I nor any of my men could ride, and we were obliged occasionally to lie down until the gusts had ceased: the very rocks of marble seemed cut by it, for they stood in shivered points, through which the wind hissed fiercely.
Charles Fellows - Journal Written during an Excursion in Asia Minor in 1838
The snow season in Pisidia and Phrygia is not limited to a few weeks in January and February. Snowstorms can occur well into April and not just on the mountains, but on the tableland too. 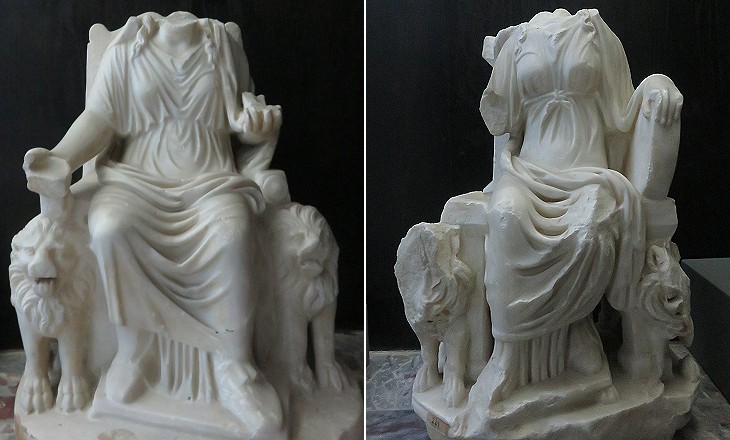 Two only of the gigantic Ionic columns of the temple of Cybele are still in their place to mark, with the huge fragments which lie about them, the grand proportions of the edifice. Hamilton.
Hamilton made reference to a temple in Sardis, which today is best known as the Artemision. Cybele was not one of the twelve Greek bickering gods and goddesses who lived on Mount Olympus. She was the principal deity in most of Asia Minor prior to its Hellenization and she continued to be worshipped as Artemis (Diana) at Ephesus and as Magna Mother (Great Mother) in Rome. At Aizani the main temple was dedicated to Zeus and Cybele. All archaeological museums of Pisidia and Phrygia have a collection of small statues of Cybele. 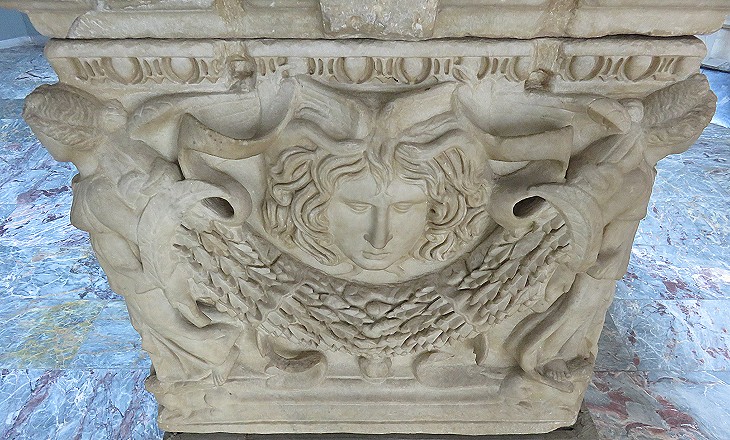 Archaeological Museum of Afyonkarahisar: sarcophagus portraying victories, Medusa and festoons (ca 180 AD) found at Dinar and made with marble from Docimeium (both sites are in the Afyonkarahisar province)

The place is near the celebrated quarries of Synnadic or Docimitic marble and it contains numerous blocks of marble and columns, some in the rough and others beautifully worked. Hamilton
Archaeologists have found plenty of marble works of art in Pisidia and Phrygia because of the availability of the raw material. The quarries of Docimeium were known for pavonazzetto, a marble with veins of as many colours as those in the tail of a peacock (Lat. pavo, pavonis). In addition to pavonazzetto, Docimeium had quarries of fine-grained white marble, where the blocks were roughly shaped into architectural elements and sculptures before being shipped to workshops for the finishing touch. 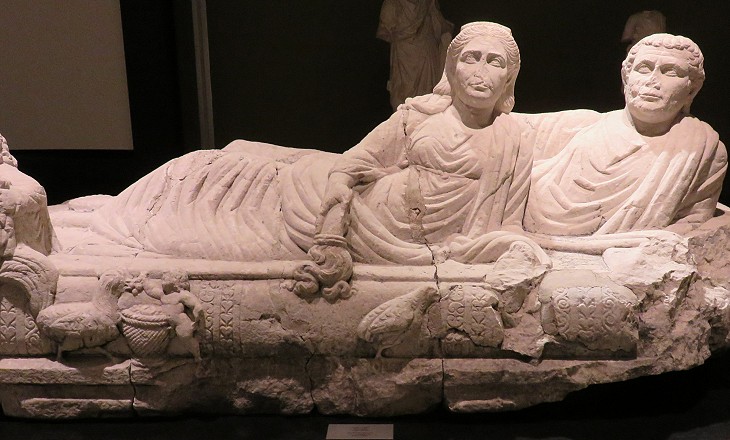 Archaeological Museum of Burdur: sarcophagus found in the district of Burdur. The upside-down torch is a symbol of death (see a page on Roman funerary rites and a list of sarcophagi found in Turkey and other countries which are shown in this website)

During the IInd century AD the making of statues, architectural elements (e.g. lintels, capitals, friezes, etc.) and sarcophagi became a major economic activity in Asia Minor. The workshops of Afrodisias had a reputation for the quality of their sculptures, whereas other workshops specialized in the making of sarcophagi. They developed new patterns which are known after the location where they were first found (e.g. the Sidamara type sarcophagi).
Sarcophagi portraying a couple on the couch they used for dining made the dead "attend" the banquets held every year at their tomb by relatives and friends.
Inscriptions often record the sum which the deceased has bequeathed for an annual celebration at his tomb, commonly on his birthday. This was variously performed; sometimes by libations of wine and milk (profusiones), or by the scattering of roses on the tomb (rosalia), accompanied by a feast.
John Kenrick - Roman Sepulchral Inscriptions - 1858 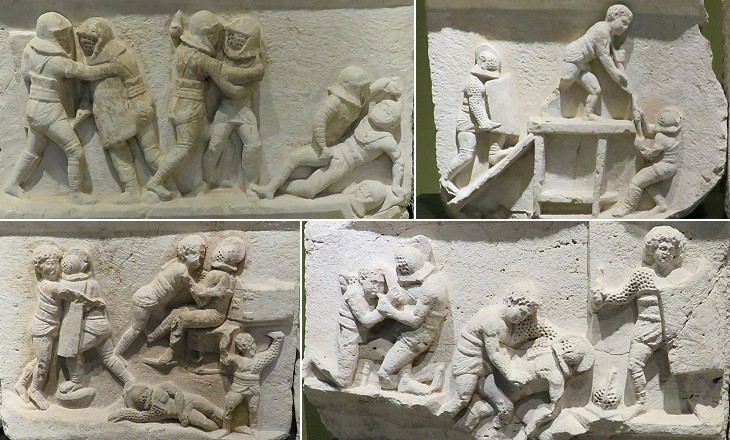 Archaeological Museum of Burdur: frieze with gladiators found in 2002 at Kibyra, a town in Pisidia

Gladiatorial fights were very frequently depicted in reliefs and mosaics throughout the whole Roman Empire. A relief now in a museum of Trieste is almost identical to those found at Kibyra. It came from Cos where many mosaics depicted gladiatorial fights.
Based on the evidence of the monuments and works of art found in Pisidia and Phrygia, it appears that, even though these regions were less favoured by nature than those on the coast (see a section on Caria, Lycia and Pamphylia), their inhabitants could enjoy watching gladiatorial fights. 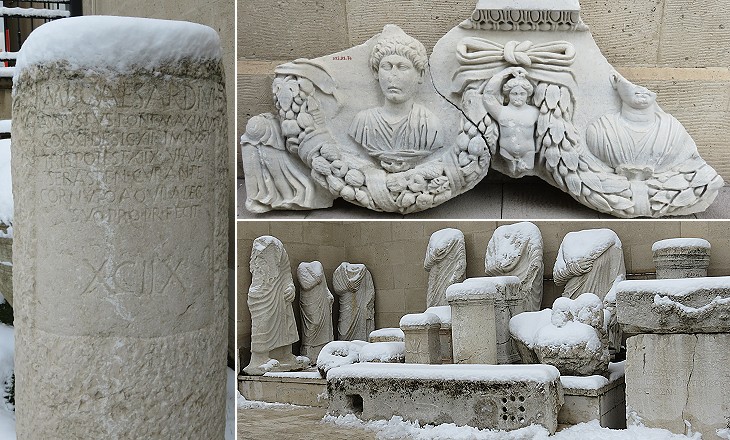 Archaeological Museum of Burdur: (left) milestone from Via Sebaste, a road opened by the Romans in the late Ist century BC to link Pisidia with Perge in Pamphylia; (right-above) fragment of a sarcophagus with festoons framing the portraits of the dead; (right-below) third-choice exhibits at the rear of the building

The image used as background for this page shows an altar with theatrical masks in the Archaeological Museum of Burdur. 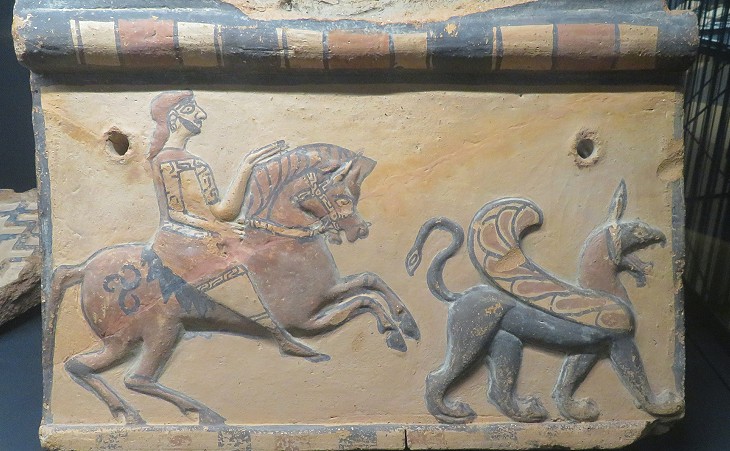