The IInd century AD is regarded by many historians as the Golden Century of the Roman Empire. It was marked by an extended period of peace which favoured economy and trade.
In particular Asia, the Roman province which included today's western Turkey, experienced a great development. Its ports, which were placed along key routes to Syria and Egypt, greatly benefited from the increase of trade.
Most of the towns covered in this section were founded well before the Roman conquest, but in the IInd century they enlarged or embellished their main buildings and added to them aqueducts and baths. They were situated in the historical regions of Caria, Lycia and Pamphylia.
They almost competed in having the largest and most decorated theatres, which were regarded as a symbol of the town's prosperity.

Clickable map of the archaeological sites (blue dots) covered in this section. The green dots indicate locations covered in other sections of this web site.

The map shows the coast line as it was in the IInd century; major changes have occurred since then; rivers and in particular the Maeander River have filled the shallow waters of some bays and today many ancient ports are miles away from the sea.

Caria: view of the countryside near Miletus; in the distance Mt. Latmus

The whole gulf of Miletus is today a coastal plain; in the past the sea reached Mt. Latmus.
Although Caria was not part of Classical Greece, Mt. Latmus is quoted in the Greek myth:
Endymion was lying asleep in a cave on Mt. Latmus when Selene (the Moon) first saw him. It was a still night and the goddess lay down by his side and kissed his closed eyes. But the shepherd did not awake as he had obtained eternal youth from Zeus, but at the price of a never-ending sleep. So every night Selene had to content herself with gently kissing him. From Robert Graves - The Greek Myths. 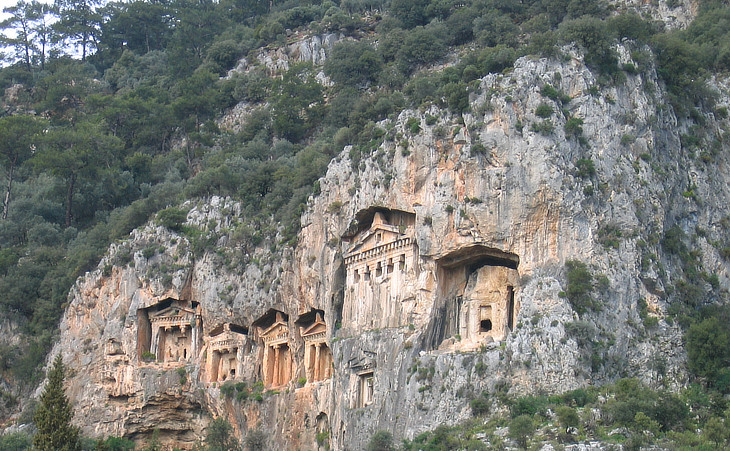 Here we frequently found massy tombs crowning the pinnacles of rocks, and innumerable chambers for tombs hollowed out of their hard sides, many having beautiful architectural designs cut in the rock, and others with the entrances most ingeniously concealed.
Charles Fellows - Journal Written during an Excursion in Asia Minor in 1838
Charles Fellows was one of the first western travellers to describe the inner parts of Lycia. This section has many excerpts from his books and from other travel accounts of the XVIIIth and early XIXth centuries. 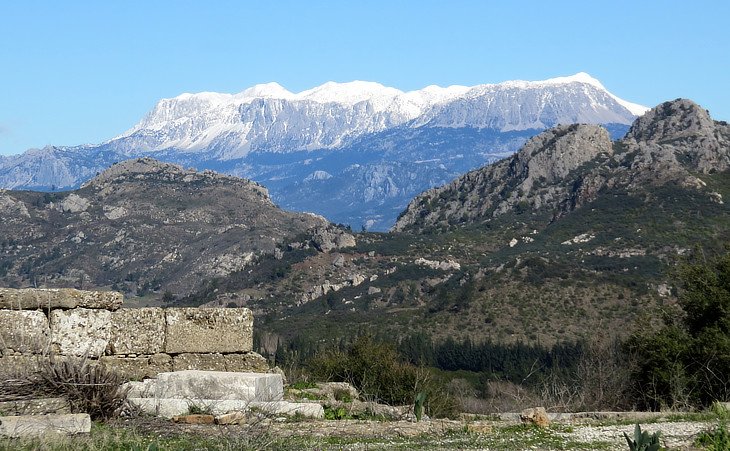 Pamphylia: view of the Taurus Mountains from the Upper Town of Aspendos

About half an hour before I reached the plain at the foot of this mountain, a view burst upon me through the cliffs, so far exceeding the usual beauty of nature as to seem like the work of magic. I looked down from the rocky steps of the throne of winter upon the rich and verdant plain of summer, with the blue sea in the distance, and on either side, like outstretched arms, ranges of mountains bounding the bay of Pamphylia. Fellows, who was the first to describe the large theatre of Aspendos.

Large flocks of goats, with their bells and the herdsman's pipe, give life to the scene, and climbing to the most craggy parts add to the picturesque effect. Fellows
In the IIIrd century epidemic disease, the fall in security due to the first Gothic raids and the military anarchy of the empire contributed to the decline of these provinces; in the following centuries almost all the towns were abandoned. Usually their monuments are inside archaeological areas, yet they are often surrounded by rural villages. These folks promote the sites where they live:

(left) White Arrow: "Spring brings plenty of flowers to Priene."; (centre) Milky: "The ancient buildings of Miletus give the grass a special flavour."; (right) Snoopy: "I enjoy taking a nap at Apollo's temple in Didyma."

(left) Sheepy: "Iasos is such a peaceful site for picnics."; (right) Hennie: "At Milas food is wrapped in history"

(left) Star of the Flock: "Kaunos is really an upmarket site"; (right) Dark Lady: " The ruins of Tlos are for connoisseurs" 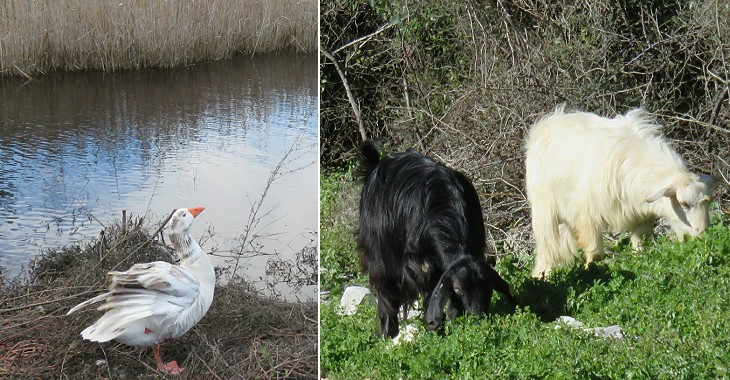 (left) Mother Goose: "The silted harbour of Phaselis is the best place to swim"; (right) Black and White: "Plenty to eat at Aspendos"

(left) Aries and its harem: "Xanthos does welcome families"; (centre) Turkish Simmenthal: "I never get bored in Letoon"; (right) Long Horns: "The grass of Patara is the greenest of Turkey"

Old Faithful: let me spell it out: "Myra has the best rock-cut tombs of Lycia"

The image used as background for this page shows the theatre of Miletus.