I was detained at Alaya by illness; and while General Koehler, with his two remaining companions pursued their journey overland to Constantinople, I proceeded thither by sea. (..) I shall now subjoin a brief itinerary of the route of General Koehler and his party. "The two great ranges on the west and north of the plains of Adalia now approach each other, and at length are only divided by the passes."
William Martin Leake - Journal of a Tour in Asia Minor (in 1800) - 1824

(left) An open sarcophagus; (right) view towards the valley

"The road, however, leaves this gorge to the right, and ascends the mountain by a paved winding causeway, a work of great labour and ingenuity. Sarcophagi, with their covers beside them, are seen in great numbers, as well in the plain as for a considerable distance up the side of the hill. Some of them were of large size, many with inscriptions. (..) The usual spring weather of these climates has now prevailed for some days; showers, often accompanied with thunder, occur in the afternoon and in the early part of the night, and during the remainder of the day the sky is perfectly clear and serene." (..) The great ruins which General Koehler passed through at the ascent of the mountains, on the second day of his departure from Adalia, seem to be those of Termessus, which next to Selge was the largest of the Pisidian cities, and was situated at the passes of mount Solyma. Leake
Today it is difficult to understand how Termessos could flourish, because the site looks so isolated: not the crow of a cock, nor the bark of a dog break the peace and quiet of the ancient town. Not even goats seem willing to venture through its ruins.

"At the top of this formidable pass, which was anciently commanded by the city, standing at the foot of it, the road enters an elevated level surrounded with mountains, and proceeds along a winding valley amidst rocks and precipices, some of which being quite detached and perpendicular, appear at a distance like castles and towers." Leake
Although close to the Mediterranean Sea on the map, Termessos did not benefit from its warm climate, because it was built at an altitude of more than 3,500 feet on the western slope of a mountain (Gulluk Dag) reaching 5,000 feet. The town was part of Pisidia, an ancient region which was located north of Lycia and west of Pamphylia. Due to its remoteness and its strong defensive position, Termessos avoided being sacked and burnt by the many armies which crossed the region. It eventually became part of the Kingdom of Pergamum, but as an allied town rather than a possession. The Romans too permitted a certain degree of autonomy to Termessos. Although the immediate whereabouts of the town did not lend themselves to farming, the nearby tableland was fertile and suitable for husbandry. 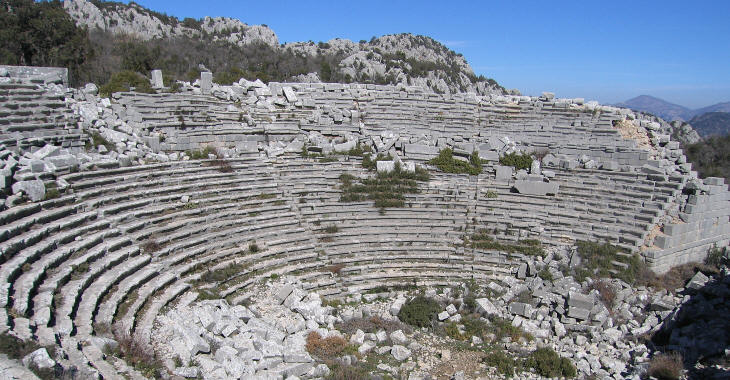 Usually ancient theatres were located at the foot of a hill or mountain; that of Termessos is somewhat extraordinary because it was built on the edge of a rock at one of the highest point of the town. The site was chosen because the rock could be cut in order to obtain rows of seats, but during the Roman rule the theatre was enlarged by adding more seats which were supported by imposing walls. Termessos had a quarry of grey stone very near the town.

It is uncertain when Termessos was abandoned, but this probably occurred even before the Arab raids brought misery to the whole region in the VIIth century AD. No other town was founded in the vicinity and so the stones of Termessos were not used to build fortresses and churches elsewhere. The visitor has the impression of seeing a town suddenly abandoned because of an earthquake or a pestilence; these actually occurred in many other towns of the region as well, but they did not lead to such dramatic consequences.

The theory which attributes the abandonment of Termessos to a devastating earthquake is somewhat contradicted by the state of many buildings including the theatre; their walls did not collapse and have withstood the centuries of total neglect which followed.

An aqueduct provided Termessos with water; this was stored in five underground cisterns which were cut into the rock; one can see the hydraulic devices used to convey the water into the cisterns and control its pressure.
Because the archaeological site is not subject to strict control, authorities have relocated to the Museum of Antalya most of the reliefs and inscriptions found at Termessos.

Gymnasium (also in the image used as background for this page)

Although gymnasia were present in all towns of the ancient world and testified to the importance given to education (of both soul and body) by the Greeks and the Romans, they rarely have withstood the ravages of time. These facilities mainly consisted of porticoes surrounding open spaces where the young had physical training; in Termessos, due to the climate, large vaulted rooms surrounded a relatively small courtyard. Their design is both imposing and elegant.

"At the foot of it, in the plain, are the ruins of a castle, and of many towers and gateways of elegant architecture, with cornices, capitals, and fluted columns lying upon the ground." Leake
At some point Termessos was enlarged with the development of a lower town located half a mile down in the valley; most of the ruins belong to buildings erected during the Roman rule; they appear in worse condition than those of the upper town, perhaps because they were exploited as a quarry as they were more accessible.
Similar to many other towns of Asia Minor, e.g. Ephesus, Termessos also had a monument associated with Emperor Hadrian, during whose rule a temple was built in the lower town.

Hadrian's temple: lintel with an egg-and-dart frieze which can be noticed also in the Hadrianeum in Rome