Miletus was once exceedingly powerful and illustrious. Its early navigators extended its commerce to remote regions. The whole Euxine Sea, the Propontis, Egypt, and other countries, were frequented by its ships, and settled by its colonies, (..) It withstood Darius, and refused to admit Alexander. It has been stiled the metropolis and head of Ionia; the bullwark of Asia; chief in war and peace; mighty by sea; the fertile mother, which had poured forth her sons to eyery quarter, counting not fewer than seventy-five cities descended from her (e.g. Sesamos/Amastri).
Richard Chandler - An account of a tour made at the expense of the Society of dilettanti - 1775

View of Miletus; the mountain behind the theatre (far left) housed the acropolis of Priene

At a quarter before eleven we turned slanting over the plain toward Palat or Miletus, which was in view. (..) We went on across the plain, with the theatre of Miletus in view before us. At ten minutes after one we were ferried over the Maeander, now called Mendres, in a triangular float, with a rope. (..) The water was smooth, but muddy. Miletus is a very mean place, but still called Palat or Palatia, The Palaces. (..) The whole site of the town, to a great extent, is spread with rubbish, and overrun with thickets. Chandler
Today Miletus is surrounded by a fertile coastal plain and its imposing theatre is no longer a reference point for seafarers.

The theatre seen from the stadium

The principal relic of its former magnificence is a ruined theatre, which is visible afar off, and was a most capacious edifice, measuring four hundred and fifty seven feet long. The external face of this vast fabric is marble, and the stones have a projection near the upper edge, which, we surmised, might contribute to the raising them with facility. The proscenium or front has been removed. The seats ranged, as usual, on the slope of the hill, and a few of them remain. The vaults, which supported the extremities, with the arches or avenues in the two wings, are constructed with such solidity, as not easily to be demolished. The entrance of the vault or substruction, on the left side, was filled up with soil; but we examined that next the river. Chandler

The theatre seen from above; see also the image used as background for this page

The original theatre exploited the slope of the hill to obtain a series of benches; the current building is the result of a major enlargement which occurred in the IInd century AD. The new benches were supported by walls and terraces and the audience could easily enter or leave the theatre via large vomitoria, passages situated behind the cavea, the seating section. The theatre could house an audience of 15,000; the representatives of the emperor or the highest magistrates of Miletus sat in a central loggia. The audience had an outstanding view over the western harbour and on the bay. You may wish to see the theatres of Aspendos and Orange which have retained the wall behind the stage.

(left) A capital near the theatre; (right) decoration of a pillar

The elaborate decoration of the theatre is typical of the IInd century; the capitals combine elements of the Ionic and Corinthian orders and in addition have an egg-and-dart ornamentation between the volutes (see an egg-and-dart frieze in the cornice of the Hadrianeum in Rome). Some pillars were decorated with mermaids, a recognition of the importance of the sea to Miletus.

Miletus was probably once on a headland or island in a bay or lake, for its hills rise out of the perfectly dead flat of the valley of the Maeander, which at this point is about ten miles across. (..) The land here is almost wholly pasture or swamp; and the river, which is deep but not broad, by its winding course shows the origin of our term for that peculiarity. (..) Its waters bring down a large quantity of mud and sand, and this deposit going on for ages doubtless accounts for the nature of the soil of the immense plain, which has not a rock or stone larger than a rounded pebble, except the fragments of some columns or ancient buildings.
Charles Fellows - Journal Written during an Excursion in Asia Minor in 1838
Miletus was located at the head of a promontory which protected several small bays. It is said that the town had four harbours. The eastern harbour was known as the Lion Harbour because it was guarded by two statues of lions (similar to Piraeus). Its shape is still noticeable. 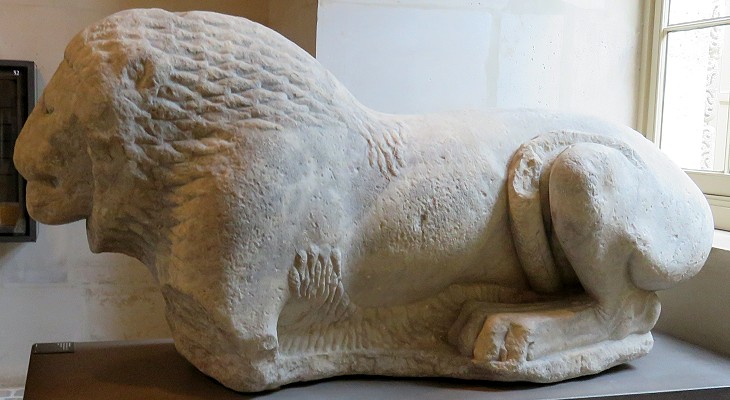 Near the ferry is a large lion in a couchant posture, much injured; and in a Turkish burying-ground another. These were placed on graves, or perhaps before a building for ornament. Chandler
This lion was found in a necropolis, but it might give an idea of those who guarded the harbour.

The security of the sea routes to Syria and Egypt was a key factor for the prosperity of Miletus; this explains why its citizens built a monument (near Lion Harbour) to celebrate the 67 BC victory of Pompey against the pirates who assaulted convoys of ships and even raided coastal towns.
A few years later the monument was rededicated to Emperor Augustus for his 31 BC victory at Actium. That victory led to the conquest of Egypt by the Romans: that in turn meant for Miletus an increased volume of trade with that new Roman province.

Temple to Apollo Delphinion (of Delphi); the image shows also at the top of the hill the ruins of a Byzantine fortress built behind the theatre

Some traces remain of an old fortress erected upon the theatre (you may wish to see how the Roman theatre of Bosra was turned into a Muslim fortress), beneath which is a square inclosure designed, it seems, as a station for an armed party to dispute or defend the passage of the river. Chandler
During some periods of the year (the photo above was taken in early March 2008) parts of the town are covered by shallow water: yet it is possible to see under its reflecting surface the foundations of a tholos (circular temple) dedicated to Apollo. The temple was surrounded by a square portico and it was the starting point of processions going to Didyma, where a major shrine was dedicated to this god.

Miletus was destroyed by Emperor Darius for having led a rebellion against the Persians, but it was soon rebuilt following the design of his architect Hippodamus. The initial part of the holy road leading to Didyma crossed the centre of the town. It was flanked by porticoes and behind them there were temples, baths, gymnasiums and a market.

Roman Nymphaeum; (left) remaining niches; (right - above) sketch showing the building as it was; (right - below) detail of its decoration

The holy road was interrupted by the southern market of Miletus: its entrance was particularly imposing, but one needs to go to Berlin to see it (it opens in another window). At a straight angle with the market the Romans built a large fountain decorated with many statues.

Roman inscriptions: (left - upside down) (P)ROCOS ASIA ET HISPANIAE a reference to Marcus Ulpius Traianus who after having been proconsul in Spain was appointed proconsul of Asia. He was the father of Emperor Trajan; (right - above - upside down) (DI)VI VESP(ASIANI) a dedication to Emperor Vespasian who awarded Marcus Ulpius Traianus the governorship of Asia; (right - below) Greek inscription celebrating Emperor Trajan

The vestiges of the heathen city are pieces of wall, broken arches, and a few scattered pedestals and inscriptions, a square marble urn, and many wells. One of the pedestals has belonged to a statue of the emperor Hadrian, who was a friend to the Milesians, as appears from the titles of saviour and benefactor bestowed on him. Another has supported the emperor Severus. Chandler
The construction of the Nymphaeum and the pavement of the Holy Road were promoted by Marcus Ulpius Traianus and by his son who had the same name, but added to it that of Nerva, the emperor who adopted him. The Market Gate was built by Emperor Hadrian a few years later.