You may wish to see pages on Roman and Christian Bosra first.
The economic decline of Byzantine Syria which started in the second half of the VIth century is attributed to the wars with the Sassanids (Persians) who occupied the country for a few years, to the effects of a bubonic plague which halved its population and to rifts among followers of different Christian churches. Minarets of the Omar (left) and Al-Khider (right) mosques

In 635 when the Arabs came to the gates of Bosra, they were welcomed by the Monophysite inhabitants of the town who felt oppressed by the Byzantines who considered them heretical; after the Arab conquest the population of Bosra fell because the town was abandoned by the Orthodox Christians, who were more Hellenized and who escaped to the territories still controlled by the Byzantines. The Monophysites soon converted to Islam, but the town did not have a major mosque until the year 720; its construction was ordered by Caliph Omar II, a successor of Caliph Al-Walid I who built the Great Mosque of Damascus. This mosque as well as the other mosques which were built in the following centuries made use to a large extent of existing buildings and materials.

In the Xth century Bosra was conquered by the Fatimides, a dynasty of Caliphs who challenged those of Baghdad and claimed to descend from Fatima, daughter of Prophet Muhammad; Bosra was detached from the rest of Syria and it became a border town, especially so after the Crusaders conquered Jerusalem in 1099. Bosra was reattached to Syria when the Ayyubids replaced the Fatimides; in 1135 during their rule the Mabrak Mosque was rebuilt on the site where the tent of Prophet Muhammad was placed when he was in Bosra and met the monk Bahira (learn more about this meeting in page two). 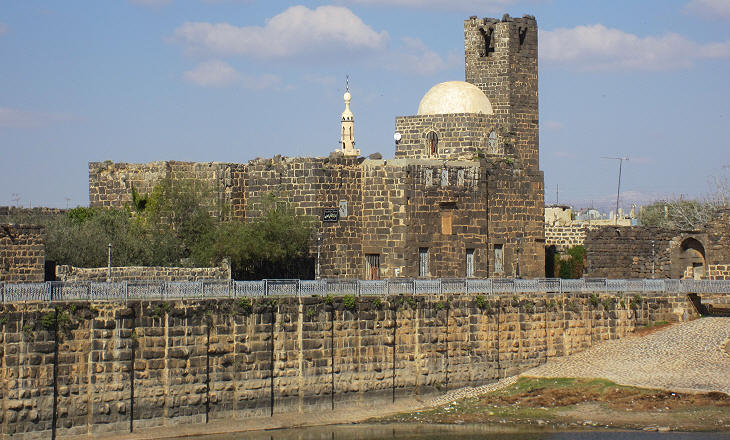 The construction in 1225 of Abou al Feda Mosque is an indication that Bosra had still a certain importance at that time; the invasion of Syria by the Mongols and their Christian allies in 1260 caused the final decline of the town; the Mongols then moved towards Egypt, but the Mamelukes checked their advance and eventually invaded Syria from the south; they did not hesitate to burn fields and pasturelands to deprive the Mongols of supplies; the whole Hauran region was abandoned and only in the XIXth century it was repopulated by tribes of Druzes from Lebanon. Bosra never returned to be a proper town, although some of the newcomers settled in its ancient ruins, similar to what occurred in nearby Ezra. 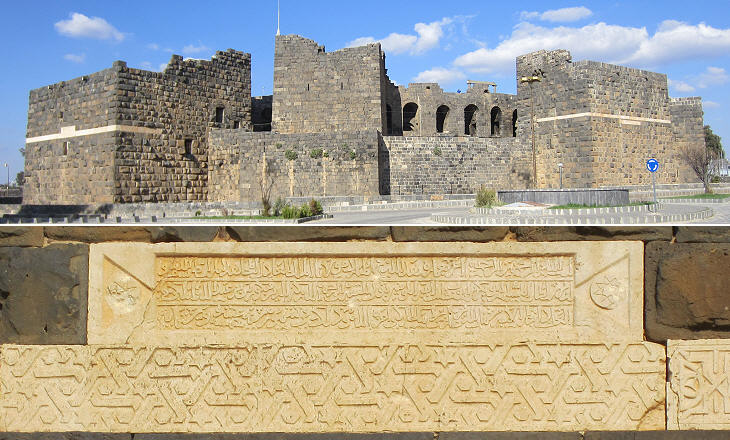 Theatre/citadel: (above) bastions surrounding the Roman theatre; (below) inscription celebrating the construction of a bastion, which made use of a former Roman inscription (the image used as background for this page shows another Arab inscription in a Roman frame)

I now quitted the precincts of the town, and just beyond the walls, on the S. side came to a large castle of Saracen origin, probably of the time of the Crusades: it is one of the best built castles in Syria, and is surrounded by a deep ditch. Its walls are very thick, and in the interior are alleys, dark vaults, subterraneous passages, etc. of the most solid construction. What distinguishes it from other Syrian castles, is that on the top of it there is a gallery of short pillars, on three sides, and on the fourth side are several niches in the wall, without any decorations; many of the pillars are still standing.
John Lewis Burckhardt - Journal of a Tour into the Haouran in the Months of April and May, 1812.
The main Muslim monument of Bosra is the citadel which was built around the ancient theatre and which almost entirely preserved it; in particular eight imposing bastions were built between 1196 and 1218; they were decorated with stripes of white marble and ancient inscriptions, both taken from ancient buildings.