Bosra is a Syrian town which is located south of Damascus and which enjoyed a period of great prosperity after being annexed to the Roman Empire by Emperor Trajan in 106 AD; see a page on Roman Bosra. An oblong square building is called by the natives Deir Boheiry, or the Monastery of the priest Boheiry. On the top of the walls is a row of windows; on the north side is a high vaulted niche; the roof has fallen in; I observed no ornaments about it. On the side of its low gate is an inscription in bad characters. (..) The natives have given to this house the name of Dar Boheiry, or the house of Boheiry. This Boheiry is a personage well known to the biographers of Mohammed, and many strange stories are related of him, by the Mohammedans, in honour of their Prophet, or by the eastern Christians, in derision of the Impostor. He is said to have been a rich Greek priest, settled at Boszra, and to have predicted the prophetic vocation of Mohammed, whom he saw when a boy passing with a caravan from Mekka to Damascus. Abou el Feradj, one of the earliest Arabic historians, relates this anecdote. According to the traditions of the Christians, he was a confidential counsellor of Mohammed, in the compilation of the Koran.
John Lewis Burckhardt - Journal of a Tour into the Haouran in the Months of April and May, 1812.
Bosra, notwithstanding having been seized and sacked in 269 by Queen Zenobia of Palmyra, continued to be a rich town until the middle of the VIth century. A Christian community is recorded from the IInd century, but the town does not retain any early church. After the 392 decree by Emperor Theodosius, which banished non-Christian beliefs, a large pagan building was turned into a church.
According to early Muslim historians, Bahira, a monk living near the church, met Prophet Muhammad when he was a boy; Muhammad was travelling with his uncle, a merchant; the monk told the uncle that Muhammad was the prophet mentioned in the original gospels. 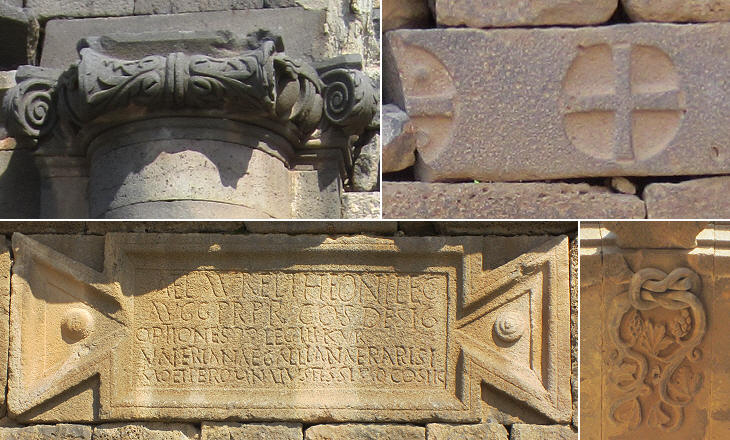 The façade of the basilica retains a Roman inscription which was first reported in 1812 by J. L. Burckhardt, a Swiss traveller and orientalist; he discovered the ancient city of Petra, which before Bosra was the capital of Nabatene, a small independent kingdom, which eventually became the Roman Province of Arabia.
Legio III Cyrenaica was a legion established by Marc Antony; it was stationed in Egypt until Emperor Hadrian relocated it to Bosra. 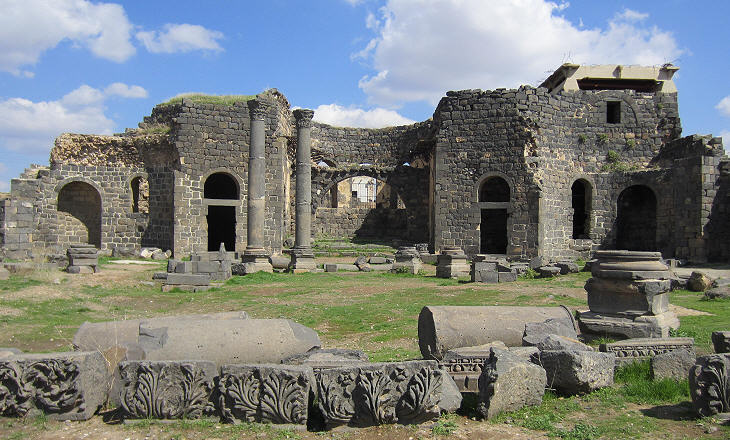 Among the principal ruins of Boszra is a square building, which within is circular, and has many arches and niches in the wall: on either side of the door within are two larger niches, and opposite to the door on the east side of the circle is the sanctuary, formed of low arches supported by Corinthian pillars, without pedestals. Several beautiful sculptured friezes are inserted in the wall, but I was unable to discover from whence they had been taken; in front of the door stand four columns. The diameter of the rotunda is four paces; its roof has fallen in, but the walls are entire, without any ornaments. It appears to have been a Greek church. Over the gate is a long inscription, but it was illegible to my sight. Burckhardt
In 512-513 a large cathedral was dedicated to Sts. Sergius, Bacchus and Leontius, three Roman soldiers who suffered martyrdom to profess their faith; the cult of military saints was promoted by the Byzantine emperors as a way of strengthening the morale of the population at a time when the empire was threatened by the Sassanids (Persians); churches dedicated to these saints can be seen at Qara and Maaloula, two other towns in southern Syria and one of the largest churches of Constantinople was dedicated to them.
The design of the cathedral was similar to that of Hagia Sophia in Constantinople, but the dome collapsed very soon thereafter. Ezra, a small town near Bosra retains a church dedicated to St. George which was built with the same design, but on a much smaller scale. (left) Another view of the cathedral and in the background the minaret of Fatima Mosque (see page three); (right) IXth century fresco portraying the Annunciation

In the IXth century, after the Arab conquest of Bosra in 635, a small church was nested into one of the arms of the cathedral. The reduced size of this church indicates that only a few Christians lived in Bosra. 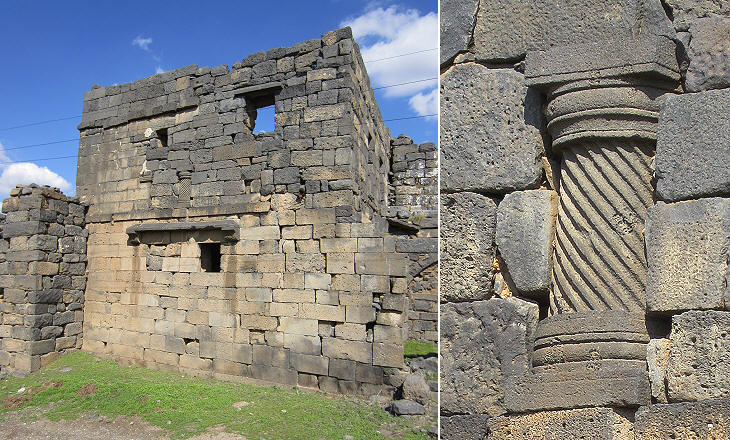 (left) Bishop's Palace; (right) a column walled on its façade

A large building behind the cathedral is known as the Bishop's Palace, but this being the actual residence of the bishop is no longer regarded as likely. The palace is a clear example of spolia, i.e. the re-use of decorative material on new buildings. 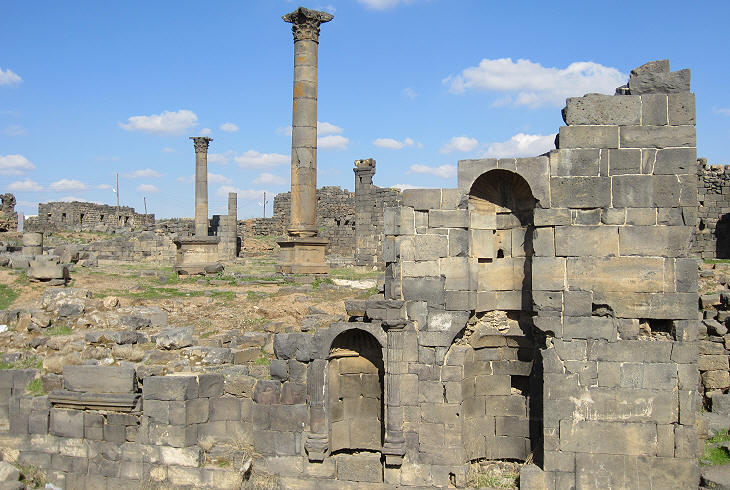 A complex of buildings known as the Central Plan Church has puzzled archaeologists for a long time: it is located outside the walls of the Roman town near the Nabatean Gate, so in origin it was probably a sanctuary of the Nabateans; most of the materials are spolia of Roman buildings of the IInd century, including the niches which decorate the façade. 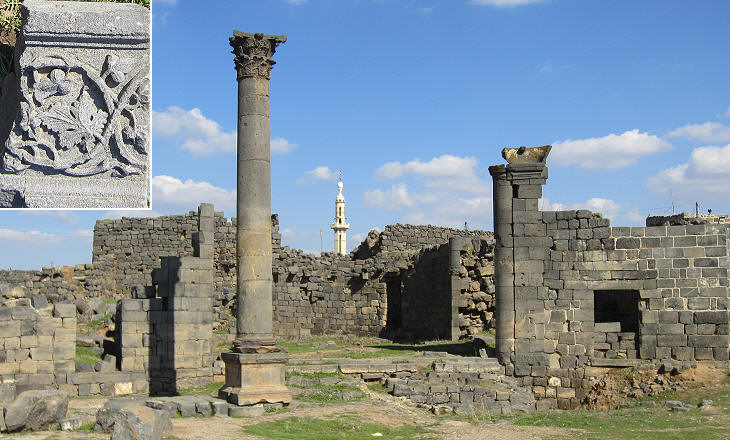 Central Plan Church: one of the apses; (inset) detail of the decoration

The central area was not covered by a dome, but by a wooden roof; the size of the complex and the unearthing of a synthronon in one of the apses have led archaeologists to believe this complex was the cathedral of Bosra, instead of the church dedicated to the military saints. A synthronon is a semicircular step in the apse of an eastern church at the centre of which the bishop's seat was placed. 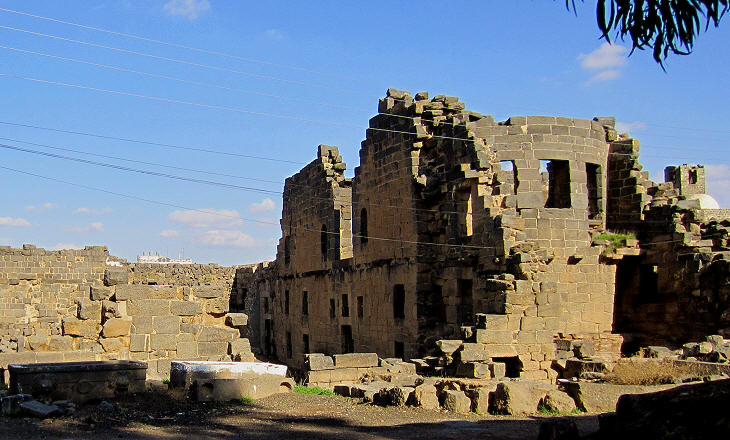 An imposing palace located at a short distance from the Central Plan Church is now thought to have been the residence of the bishop. It was known as Trajan's Palace, on the assumption it was built by Emperor Trajan on the site of the former palace of the Nabatean kings. 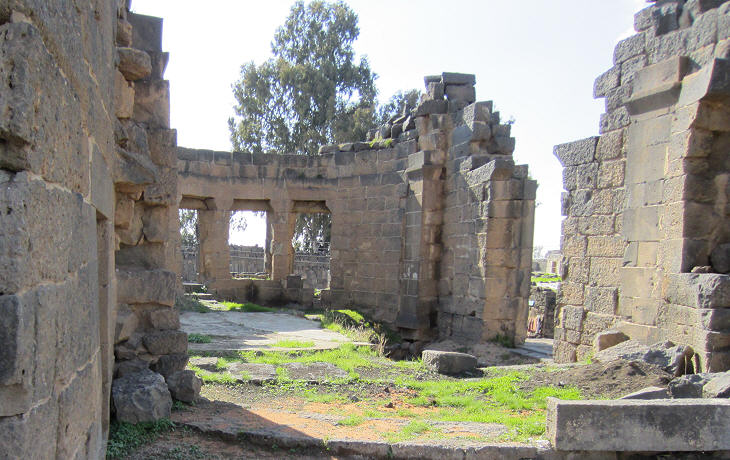 Based on the assumption that the palace had been built by Trajan, a hall with two apses was named triclinium, the dining room of the Romans, but it now appears to be the reception hall of the bishops.

The image in the background of this page shows a detail of a detached mosaic on display at the Theatre of Bosra.