Boszra is situated in the open plain and is at present the last inhabited place in the south-east extremity of the Haouran; it was formerly the capital of Arabia Provincia, and is now, including its ruins, the largest town in the Haouran.
John Lewis Burckhardt - Journal of a Tour into the Haouran in the Months of April and May, 1812. Burckhardt's accurate descriptions of the sites he visited help today's travellers in understanding which ancient monuments were unearthed and/or reconstructed by archaeologists.
Hauran is a region of Syria which is located south of Damascus and which enjoyed a period of great prosperity after being annexed to the Roman Empire by Emperor Trajan in 106 AD. 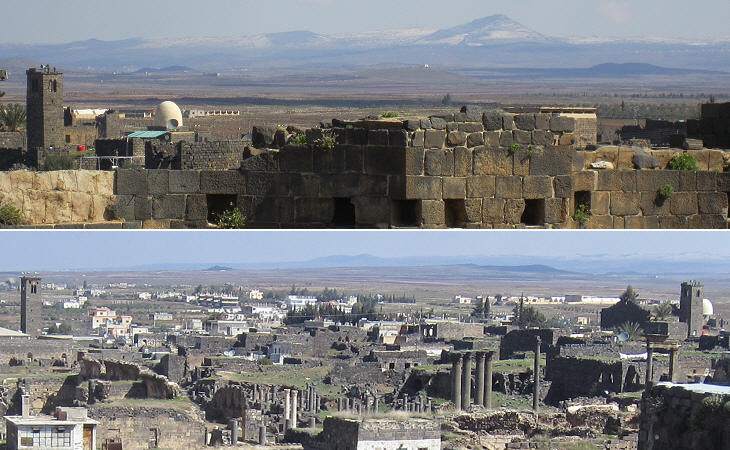 Views from the theatre (early March 2011); (above) towards Jebel al-Druze; (below) towards the ancient town

Hauran is a low tableland which is limited to the west by the Golan Heights and to the east by Jebel al-Druze, a range of low mountains which today are named after the Druzes who migrated to this region from Lebanon and repopulated it in the XVIIth and XIXth centuries; these mountains separate Hauran from the Syro-Arabian desert, a combination of steppe and true desert which from Syria and Iraq reaches Jordan, Saudi Arabia and Yemen. 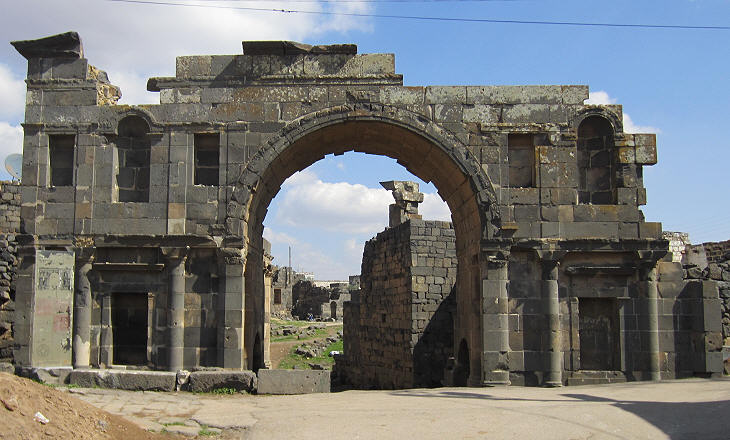 Before being annexed to the Roman Empire, Hauran was part of a small kingdom which included most of today's Jordan; according to Titus Flavius Josephus, a Romano-Jewish historian of the late Ist century AD, the kingdom was called Nabatene and its inhabitants Nabateans.
Nabatene was a buffer-state between the Roman Empire and the Bedouin tribes who lived in the desert; due to its position it controlled major trade routes between the Persian Gulf and the Mediterranean and Red Seas; Petra, its capital in the south of the country, was a rich and cosmopolitan town. 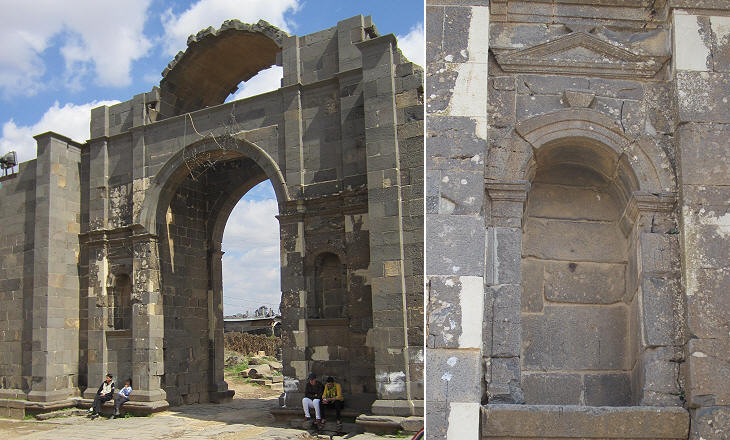 In proceeding from the castle westwards, I arrived, in a quarter of an hour, at the western gate of the town, where the long street terminates. The gate is a fine arch, with niches on each side, in perfect preservation: the people of Boszra call it Bab el Haoua or the Wind gate, probably because the prevailing or summer breezes blow from that point. A broad paved causeway, of which some traces yet remain, led into the town. Burckhardt
During the Ist century AD trade routes through Petra lost their importance and towards the end of that century King Rabel II moved his residence to Bosra (aka Bostra), a small town in Hauran, very near today's border between Syria and Jordan; Rabel II was the last king of Nabatene, because at his death Emperor Trajan preferred to impose direct Roman rule on the region; this occurred without opposition and Bosra became the capital of the province of Arabia Petraea, or simply Arabia, which broadly corresponded to today's Jordan. 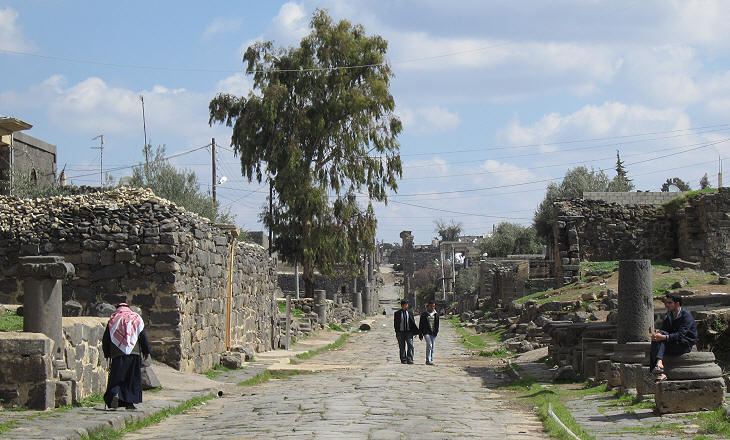 Vestiges of the ancient pavement are also seen in many of the streets, with a paved footway on each side. Burckhardt
The integration into the Roman Empire and the advanced irrigation technology introduced by the Romans turned Hauran into one of the granaries of the empire; Bosra was enlarged to the east of the Nabatean town and it was redesigned in line with Roman practices; Decumanus Maximus, a long colonnaded street crossed it from west (where a new gate was built) to east (where the gate of the Nabatean town was located). 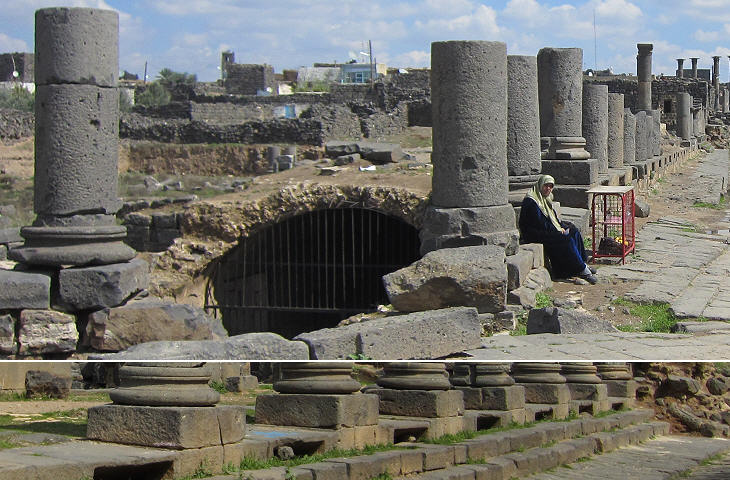 (above) Cryptoporticus (hidden portico, but it is actually a hidden warehouse); (below) openings along Decumanus Maximus

The market of Bosra was located along the northern side of Decumanus Maximus; it was a large square at a level which was lower than that of the street; commodities were stored in a very long warehouse (more than 300 ft) on the Decumanus; it had three entrances from the market and 34 small openings in the vault on the street side for light and ventilation. 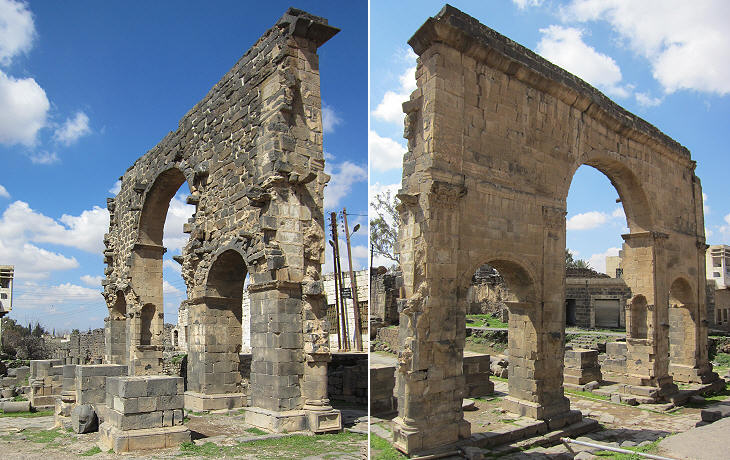 In descending the principal street, is a triumphal arch, almost entire, but presenting nothing very striking in its appearance, from the circumstance of the approach to it being choked with private houses, as is the case with all the public buildings in Boszra. The arch consists of a high central arch, with two lower side arches; between these are Corinthian pilasters, with projecting bases for statues. Burckhardt
A triumphal arch along Decumanus Maximus was dedicated to Cornelius Palma, the Roman governor of Syria who managed the annexation of Bosra and was its first governor; the southern side of the arch is lost. 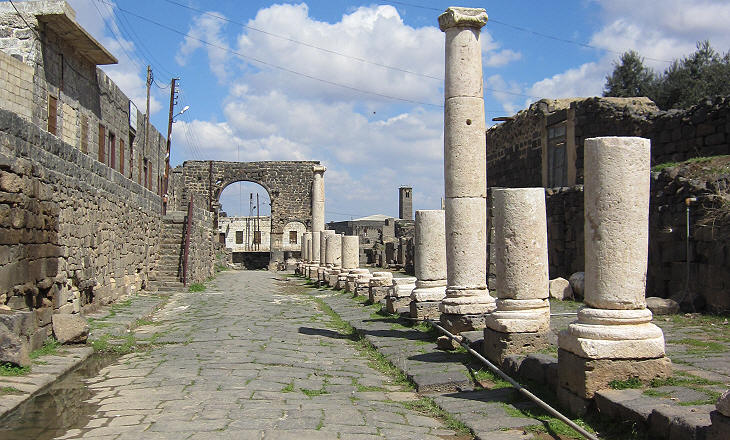 Bosra was the capital of a very minor province and its economy was based on farming, yet Roman governors and local authorities did not spare any expense to embellish it. Basalt, a black volcanic stone, was readily available and most of the houses and monuments were built with it; however the dark tones of basalt induced monotony; for this reason white marble columns were imported from other parts of the Empire. 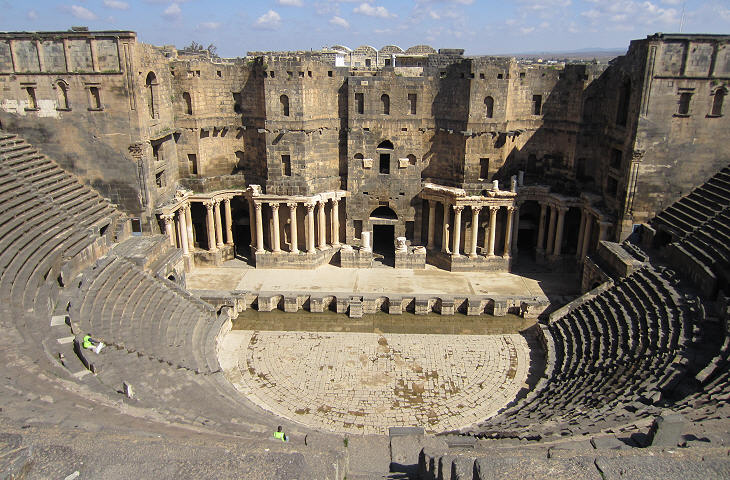 A generous assessment of the population of Bosra estimates that it reached 80,000 inhabitants, yet its theatre could accommodate some 17,000 spectators according to some archaeologists; other estimates indicate an audience of 10,000, but even in this case the size of the theatre appears to have exceeded the needs of the town, considering that Bosra did not house a sanctuary or hosted games. The theatre was built shortly after the Roman annexation of the town and its construction was not favoured by the slope of a hill or other natural advantage. 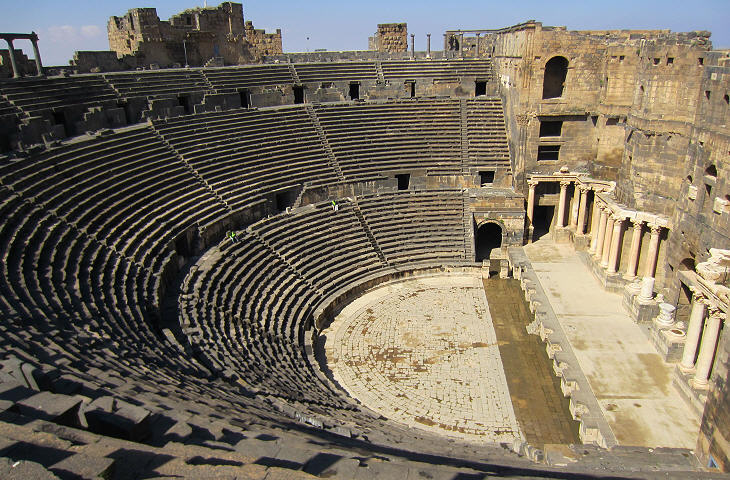 The theatre of Bosra is very well preserved because in the XIIth and XIIIth century it was turned into a fortress by surrounding it with a series of imposing bastions (read Burckhardt's comments)) the complex acquired a solidity which defied earthquakes and the ravages of time. The type of basalt which was used contributed to the preservation of the theatre because it is a compact and not porous stone. 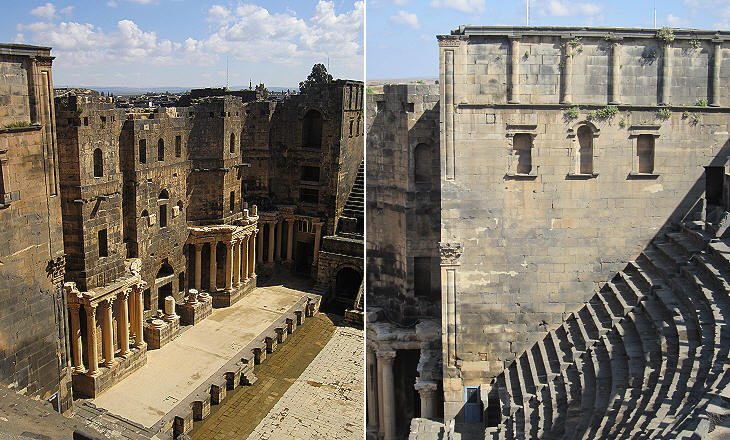 The view of the stage was excellent from all seats which were accessed through large internal passages (vomitoria), which eventually turned out to be very useful when the building became a fortress because the defenders could easily move about. The decoration of the theatre lacks the reliefs which can be seen in other Roman theatres (e.g. Sabratha), but not mouldings and decorative pillars and capitals. The image used as background for this page shows a detail of the stage decoration. 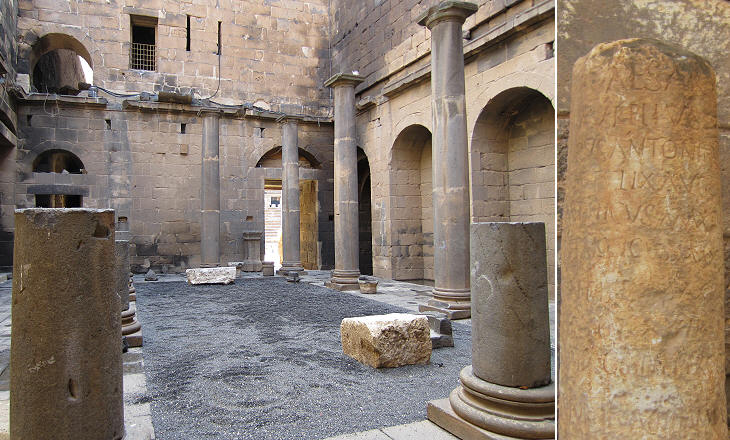 The theatre of Bosra offers an almost unique opportunity to see the backstage of a Roman theatre, where the actors rehearsed the play, changed costumes and prepared for their entrance onto the stage.
You may wish to see the theatres of Orange and Aspendos which both retain the wall behind the stage. 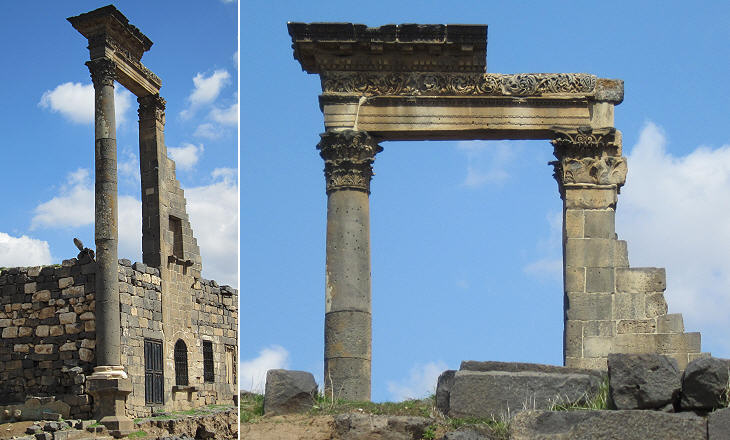 We came to the principal ruin of Boszra, the remains of a temple, situated on the side of a long street, which runs across the whole town, and terminates at the western gate. Of this temple nothing remains but the back wall, with two pilasters, and a column, joined by its entablature to the main wall; they are all of the Corinthian order, and both capitals and architraves are richly adorned with sculpture. Burckhardt
Kalybe was a kind of temple typical of the Hauran region (see that at Philippopolis); the statue of the god was not housed in a cell, but was placed in the front of the temple; it was most likely a local, although Hellenized, deity (you may wish to see a page dealing with the integration between eastern and western gods in Syria).
At Bosra the kalybe was located at the intersection between Decumanus and Cardo Maximus, the two main streets of the town. Only two columns of the original building remain because the rest was incorporated into a house. 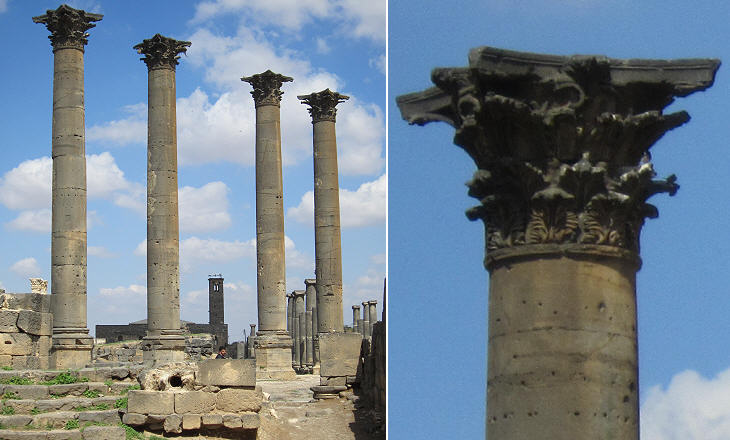 Nymphaeum and detail of a capital

In front of the temple, but standing in an oblique direction towards it, are four large Corinthian columns, equalling in beauty of execution the finest of those at Baalbec or Palmyra (those in the temple of the Sun at the latter place excepted): they are quite perfect, are six spans in diameter, and somewhat more than forty-five feet in height; they are composed of many pieces of different sizes, the smallest being towards the top, and they do not appear to have been united by an entablature. They are not at equal distances, the space between the two middle ones being greater than the two other intervals. These four large columns, and those of Kanouat, are the finest remains of antiquity in the Haouran. Burckhardt
The intersection between the two main streets was embellished by an imposing fountain which stood opposite the kalybe; the fountain is almost entirely lost, but not so the four Corinthian columns which framed it. 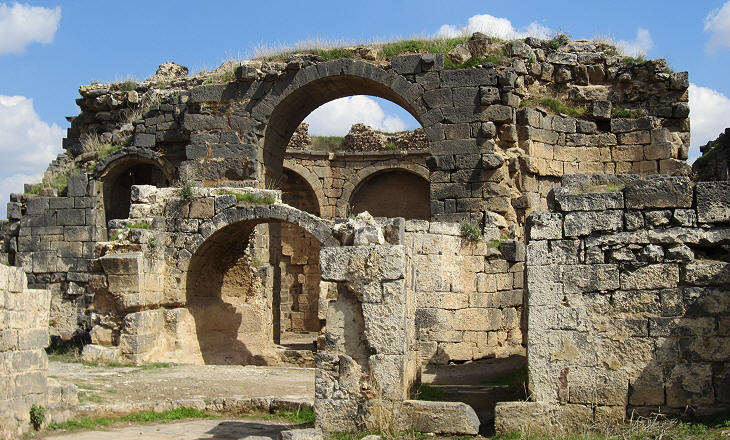 The southern section of the intersection was occupied by baths; their walls were built with basalt stones, but the domes were made of a sort of concrete composed of volcanic ashes; this construction technique was developed by the Romans by using pozzolana, a special sand they found at Puteoli (today's Pozzuoli), a town in a volcanic area near Naples. 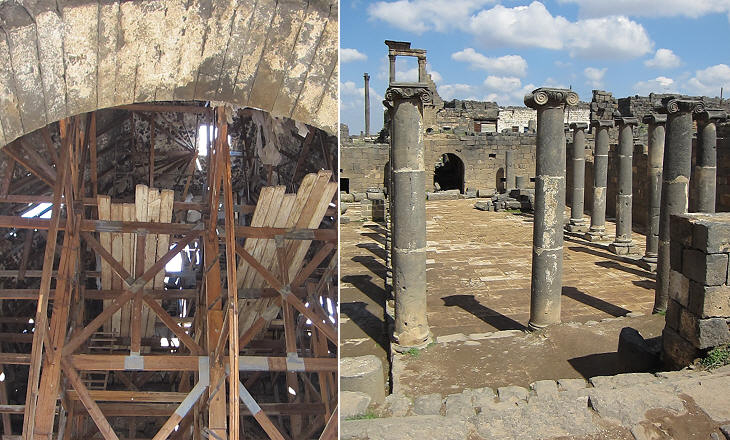 Southern Baths: (left) dome of the apodyterium (changing rooms); (right) one of the two courtyards adjoining the baths

All the domes but one have collapsed; owing to its frailty it is supported by scaffoldings. The complex had additional facilities for exercising or just walking under a portico while chatting with friends (the preferred pastime of the Greco-Roman world; you may wish to learn what went on in a Roman bath according to Seneca). 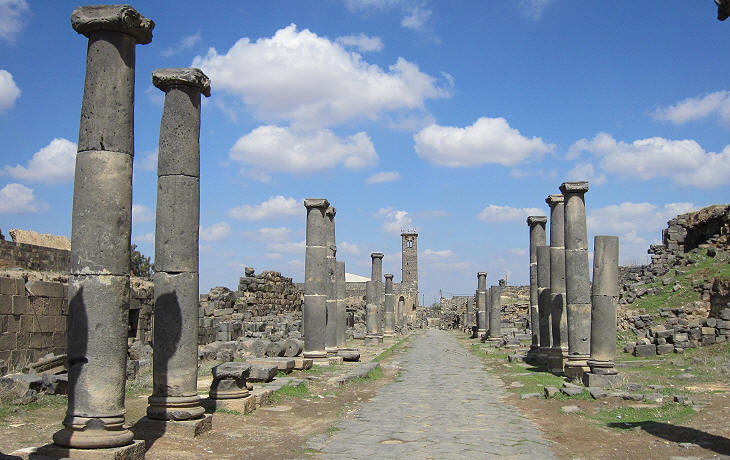 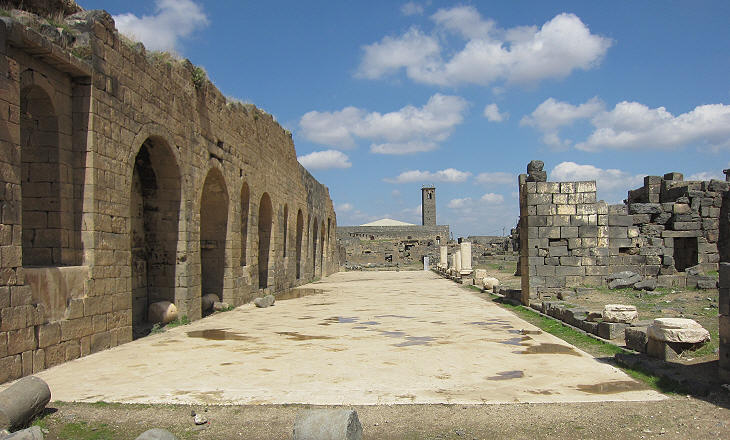 For a long time and still in most tourist guides, a series of buildings and courtyards located to the west of Cardo Maximus, have been thought to be part of the market facilities, in general terms. Archaeologists now believe they were a second bath establishment, probably built before the Southern Baths. 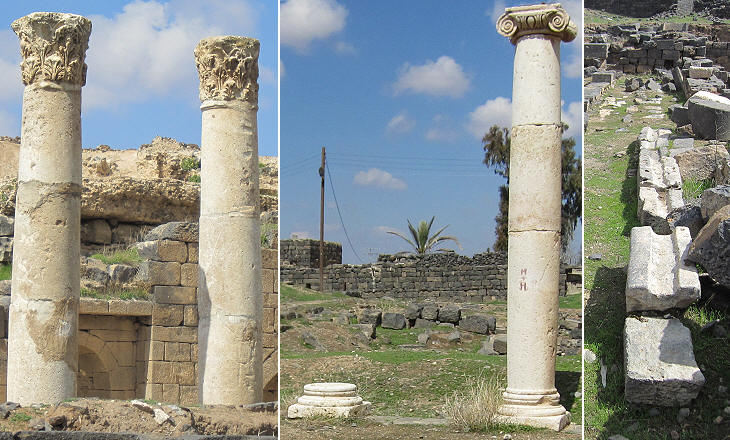 The materials and the decoration of these baths are richer than those of the Southern Baths; it is likely that they were built at the time of Emperor Hadrian or Emperor Antoninus Pius, two emperors who promoted the embellishment of many provincial cities. 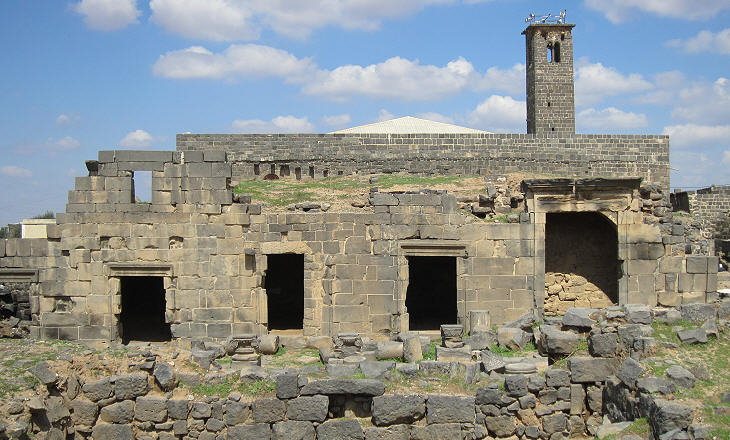 Baths, temples, porticoes and arches can be found in many ancient Roman cities; it is more rare to find palaces or ordinary houses; Bosra instead retains the whole array of buildings which made up a Roman town, although for many of them archaeologists have not found specific information about their use or to whom they belonged. 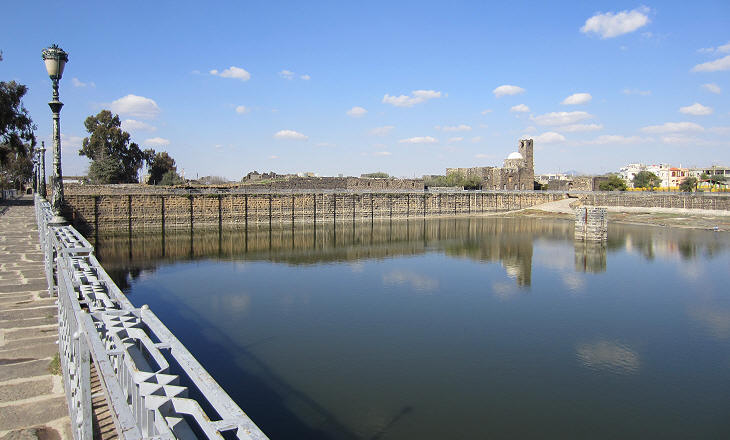 In the eastern quarter of the town is a large Birket or reservoir, almost perfect, one hundred and ninety paces in length, one hundred and fifty three in breadth, and enclosed by a wall seven feet in thickness, built of large square stones; its depth maybe about twenty feet. A staircase leads down to the water, as the basin is never completely filled. Burckhardt
It is generally thought that the region of Hauran enjoyed larger rainfalls in the past than it does today; in winter snow was very common and its melting provided a source of water for many months; yet summers were very hot and dry and so the Romans provided Bosra with a large cistern to ensure fountains and baths were supplied in the dry season. You may wish to see a fine Roman cistern in Turkey.