Lada is said to be the Lycian word for 'woman'; this may explain why the Lycians (among the many gods of the Greek myth) chose to dedicate to Leto the shrine where they once worshipped Mother Earth or a similar female deity. This change occurred in most of the cities on the Asian shore of the Aegean Sea and on some of the nearby islands as a consequence of the spread of Greek civilization.

(left) The three temples of Letoon: in the foreground that dedicated to Apollo and Artemis, then a second temple of uncertain purpose and finally the temple dedicated to Leto; (right) Temple to Leto

Then occurs the river Xanthus. In may be ascended in small boats to the temple of Latona, which is situated ten stades above its mouth. (..) Beyond the Xanthus is Patara.
William Martin Leake - Journal of a Tour in Asia Minor (in 1800) - 1824
Leake did not visit the site, he just quoted Strabo. In 1838 Charles Fellows who extensively travelled in the Xanthus valley, where he discovered the towns of Xanthos and Tlos, was unable to identify the site of the shrine to Leto. George Niemann and Otto Berndorf conducted the first excavations in 1881/1882.

Temple to Apollo and Artemis: mosaic, a detail is shown also in the image used as background for this page

Leto with Apollo, her womanish son, and Artemis, her mannish daughter, formed a triad which reminded the Lycians of their archaic religious system, where female deities prevailed. Archaeologists attributed one of the temples to Apollo and Artemis when they discovered an elegant mosaic with their symbols: Artemis' bow and Apollo's lyre. However because archaeologists often disagree, some say that the bow is another symbol of Apollo and believe that the temple was dedicated to Apollo only; they suggest the temple between this one and that to Leto was dedicated to Artemis.

Letoon was located near the sea, at only three miles from Xanthos. Its population was most likely limited to the priests who performed religious ceremonies at the temples and their servants, yet Letoon had a large theatre. This is explained by the fact that periodical festivals were held in honour of Leto and her children and crowds came not only from nearby Xanthos and Patara, but from the whole region.

Initially the theatre was carved from natural bedrock, but it was enlarged in IInd century AD; two very fine archways facilitated the access of the audience. 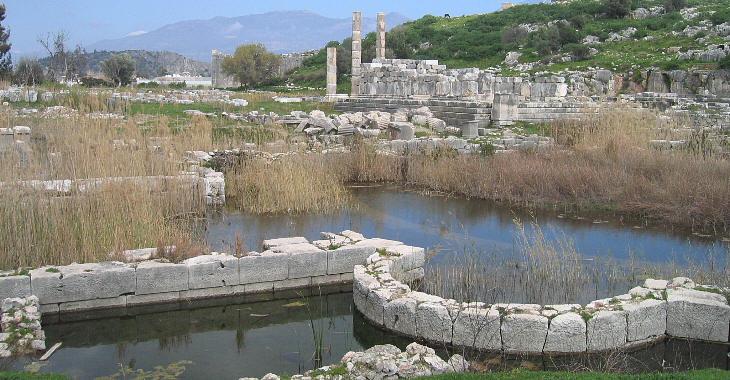 Nymphaeum, monumental fountain, probably on the site of a sacred spring

Ovid (Metamorphoses - Book VI) wrote that Lato with her twins left Delos immediately after the delivery and she came to Lycia; the goddess parched by the radiant heat, felt her thirst and drank from this spring.
Letoon, similar to many other ancient Lycian towns by the sea, is now partially covered by marshes. This is because when the region declined there were no longer enough human and financial resources to carry on the necessary maintenance of the rivers. The decline of Lycia lasted many centuries, but three events had a special relevance to it: the first one was a plague which occurred during the reign of Emperor Marcus Aurelius. A second major pestilence occurred during the reign of Emperor Justinian; the third and final blow to the prosperity of the region occurred in the VIIth century when Arab raids forced the inhabitants to abandon most of the coastal towns. This led to the development of marshes and very unhealthy living conditions.