(left) A stretch of the walls and the acropolis; (right) the former harbour of Priene

We set out to survey the ruins of Priene, with the Greek, at whose house we lodged, for our guide. He led us first to the acropolis or citadel, to which we ascended through the village; the track is bad, by breaks in the mountain and small cascades. (..) A steep, high, naked rock rises behind; and the area terminates before in a most abrupt and formidable precipice, from which we looked down with wonder on the diminutive objects beneath us. The massive heap of a temple below appeared to the naked eye, but as chippings of marble. (..) The whole circuit of the wall of the city is standing, besides several portions within it worthy of admiration for their solidity and beauty.
Richard Chandler - An account of a tour made at the expense of the Society of dilettanti - 1775
Priene was most likely the name given to a very ancient port at the mouth of the Maeander River; during the IVth century BC the sediments carried by the river silted the port and the inhabitants decided to move their town to its current location close to a (now silted) deep sea bay. New Priene was built on the lower part of a mountain; the upper part was very steep and in case of need the inhabitants could seek refuge on its top.

The modern history of Priene, as well as of Miletus, is very imperfect. It is now called Samsun and Samsun-kalesi, which names seem not very recent. Chandler
Priene was located in Ionia and it was close to the northern border of Caria, a province of the Persian Empire having as its capital Halicarnassus (Bodrum); the region was conquered by Alexander the Great; Priene eventually became part of the kingdom of Pergamum and when the last king bequeathed his possessions to Rome, Priene was included in the province of Asia which had Ephesus as capital.
During the Roman rule Priene retained some form of self-government; its magistrates (pritanes, a sort of Roman senators) performed their duties in a hall (Prytaneion) which contained a holy fire.
The town was designed according to schemes developed by Hippodamus of Miletus, a Vth century architect who is regarded as the father of urban planning. The main streets of Priene were parallel on an east-west direction. Shorter streets intersected them at right angles, thus composing an orthogonal grid.

The council of citizens (boule) met in the bouleuterion: that of Priene could contain an audience of 640. Unlike many other buildings having the same purpose, e.g. that of Iassos, it does not have a semicircular shape. At its centre stood a small altar. 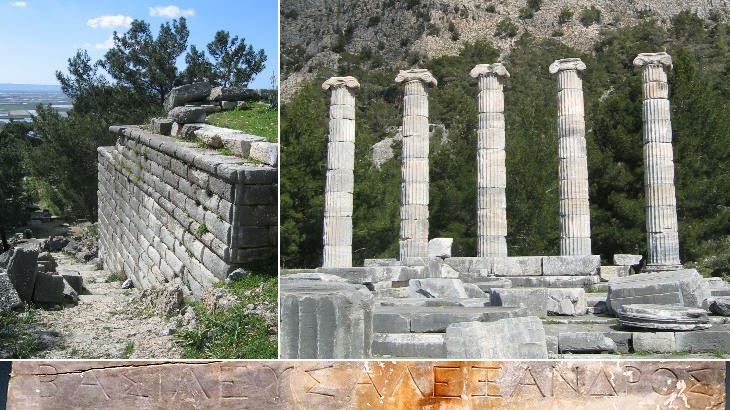 Temple of Athena: (above-left) walls supporting the temple; (above-right) reconstructed columns; (below) British Museum: part of the dedicatory inscription by Alexander the Great (Basileus Alexandros); the image used as background for this page shows one of the capitals

The temple of Minerva Polias, though prostrate was a remain of Ionian elegance and grandeur too curious to be hastily or slightly examined. (..) When entire, it overlooked the city, which was seated on the side of the mountain, flat beneath flat, in gradation, to the edge of the plain. The areas are levelled, and the communication preserved by steps cut in the slopes. Below the temple are broken columns, and pieces of marble, the remnants of edifices of the Ionic and Doric, orders. Chandler
The most important temple of Priene was built by Alexander the Great and it was dedicated to Athena; it is thought that the statue of the goddess was a copy of that in the Parthenon of Athens. It was a gift from Orophernes, king of Cappadocia in ca 160 BC as a reward for the help he received from Priene.

Temple of Athena: sections of the columns and detail of a capital

We rode on to Sansun Kalesi (Priene), which I was very glad to see. It is an exceedingly fine site. Unfortunately it rained and blew so violently that I could not do much; but if one could stay and dig in the temple, I dare say one might find a treasure of statues, for it remains exactly as it fell.
Travels in southern Europe and the Levant, 1810-1817. The journal of Charles Robert Cockerell
Priene was part of Ionia and the temple was built in perfect Ionic order with very elegant capitals; the columns were made up of several sections. The five standing columns were reconstructed in the 1960s. 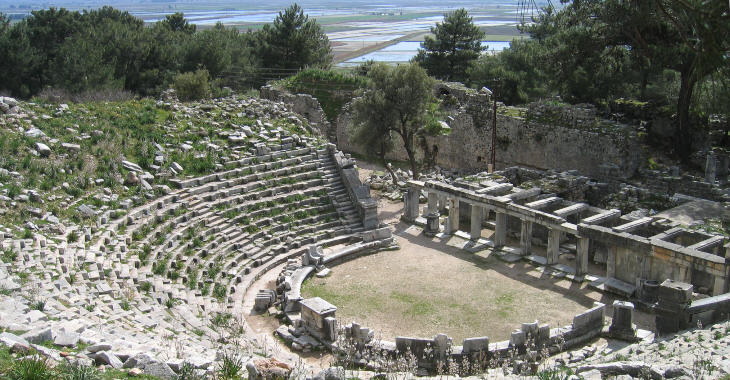 In the mountain, on the left hand, going from the temple, is the recess, with some vestiges, of the theatre. Chandler
It is difficult to assess the population of Priene: the main street which crossed the town is no longer than half a mile, so one does not expect to find a theatre with more than 5,000 seats. It was enlarged during the Roman rule and the back wall supported by pillars belongs to that period.

The magistrates of Priene had the privilege of attending performances from specially designed seats.
The theatre was not modified in order to be used as an arena for gladiatorial fights.

Farther down is the ground-plat of the stadium, by the city-wall. The area was narrow, and the seats ranged only on the side facing the plain. Chandler
At the southern edge of the town there is evidence of a stadium, which once had a commanding view over the sea (and beyond it over Miletus). Archaeologists have identified the blocks which marked the starting line (you may wish to see that of the stadium of Olympia).

Gymnasium: (left) wash-basins; (right-above) lion head and graffiti in the "ephebeion", the section for the exercises of youths of from sixteen to eighteen years of age; (right-below) section of a lintel

What is left of the gymnasium is not impressive, but it is very interesting: archaeologists have found the wash-basins almost intact; the water came out from lion heads placed along a conduit; here and there the walls of the ephebeion show rough inscriptions.

Byzantine church and detail of the ambo (pulpit)

Among the rubbish and scattered marbles is an inscription, with a fragment or two, and ruins of churches, but no wells or mosques as at Miletus. Chandler
The decline of the Roman Empire and the move to the Christian faith led to the abandonment of many traditions of the Ancient World; theatre performances were too much linked to the gods of the past and the same can be said for the athletic comtests.
In particular Emperor Justinian made many decisions aimed at eradicating the ancient beliefs (and way of life). A church was built making use of existing walls near the theatre. Its limited size indicates that the population of Priene had greatly shrunk from its heyday.
The silting of the harbour reduced the importance of Priene; in the 1920s the last remaining villagers were moved to another location (the village of Gelebec).