Patara is one of the best known Turkish summer resorts. Luckily it has been incorporated into a national park and no hotels or other tourist facilities have been built near its long and sandy beach. Bathers can reach it via a road which crosses the archaeological area of ancient Patara. 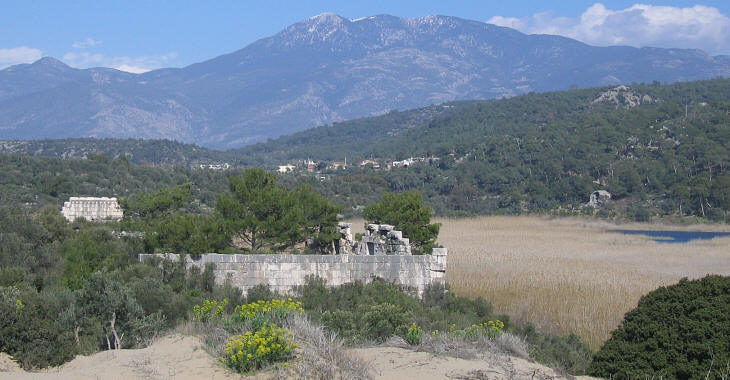 Our operations began at Yedy-Booroon, which means the Seven-Capes; a knot of high and rugged mountains, that appear to have been the antient Mount Cragus of Lycia, the abode of the fabulous Chimaera. At the foot of these mountains the river Xanthus winds through an extensive valley; and a little farther to the eastward, the ruins of the city of Patara stand near the sea-shore. (..) It is evident, from both Strabo and Livy, that Patara had formeriy a harbour; the situation is still apparent, but at present it is a swamp, choked up with sand and bushes, and all communication with the sea is cut off by a straight beach through which there is no opening.
Francis Beaufort, Captain of HMS Frederikssteen, a frigate of 32 guns: Karamania; or a brief description of the South Coast of Asia Minor, and of the Remains of Antiquity collected during a survey of that coast, under the orders of the Lords Commissioners of the Admiralty, in the years 1811 & 1812 - Published in 1817
The sand which is today's resource of Patara, in the past was its main worry. The well repaired harbour was always threatened by silting. Although in antiquity engineers did not have powerful engines they managed for centuries to keep free from obstructions the mouth of the river where the harbour was located. Patara was so important that a large granary was built during the reign of Emperor Hadrian (he also built a granary at Andriake). It consisted of eight aligned storage rooms, each with its own door facing the harbour.

This place, once a celebrated oracle of Apollo, still preserves its former name, and many traces of its former grandeur; (..) At its northern extreme, one of the gates is still erect; (..) with an inscription, which occupies the same member of the cornice on both fronts. There have also been inscriptions on six projecting scrolls between the arches, but few of them are now legible. Beaufort
The triumphal arch was at first thought to have been built to celebrate a visit by Emperor Hadrian. Archaeologists now believe it was celebrating the completion of an aqueduct built by Trebonius Proculus Mettius Modestus, Roman governor of Lycia and Pamphylia. This occurred around 100 AD; Modestus is recorded as having been appointed consul in 103. The arch was decorated with statues of Modestus and his relatives. 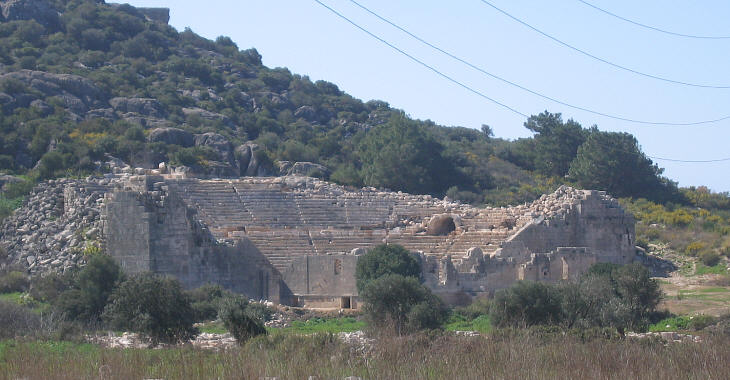 The theatre at Patara is excavated in the northern side of a small hill. (..) it contains thirty-four rows of marble seats, few of which have been disturbed. The superior preservation distinguishes thiis theatre from most of those which are extant, and would render it well worthy of minute architectural detail. At the eastern entrance there is a long and very perfect inscription recording the building of the theatre by Q. Velius Titianus and its dedication by his daughter Velia Procla, in the fourth consulate of the Emperor Antoninus Pius. Beaufort

The theatre is, as usual, excavated from the hill sheltering it from the sea; but the quantity of sand brought down by the river Xanthus, and by the almost continual eddies of wind occasioned by the high mountains of the Cragus range, have formed banks of sand along the coast, which is drifted over the walls of the theatre, so that the area of it is more than half filled up, and the whole, with many other ruins, will soon be entirely buried and left for future ages to disinter.
Charles Fellows - Journal Written during an Excursion in Asia Minor in 1838
The theatre dates back to Hellenistic times, but it was enlarged and modified during the Roman rule. In particular after the earthquake which struck the region in 141 a major restoration was carried out during the reign of Emperor Antoninus Pius. Part of the decoration is based on military symbols, an indication that the theatre was used also for gladiatorial fights.

Scene and General View of Patara; the building behind the scene was a bouleuterion; in the distance the agora and the arch of Mettius Modestus

The town walls surrounded an area of considerable extent. Beaufort
From the highest seats of the theatre one enjoys an impressive view of Patara; archaeologists have uncovered a bouleuterion, a small theatre used also as an assembly hall, and the site of the agora, the city's market place/forum. Excavations had to deal with two different environments, sand dunes and marshland, both very tricky because they tend to cover again what has been brought to light.

The harbour is now rich with the vegetation of shrubs, and many fine clusters of palm-trees. Fellows
Patara had four baths: those near the harbour are also known as the Date Palm baths owing to a nearby group of such trees. The rooms of the baths were placed one next to the other. They were most likely decorated with marbles, but these were calcined during the Byzantine period in order to obtain lime.

Colonnaded street of the Agorà

An impressive street flanked by columns (with shafts of Egyptian granite and marble capitals) linked the harbour with the agora. It was uncovered and partially reconstructed in 2007. Although further archaeological work will bring to light the part of the street which is still under water and ground, it is unlikely the site will be more evocative than it was in March 2008 when the photo shown above was taken.

(left) A small temple; (right) a temple-tomb (both Roman period)

We traced the remains of many small temples in the masses of ruins, though little more than the foundations, or at most the cellas, are standing. Fellows
Apparently Patara did not have large temples, but it had many small temples. This should not come as a surprise: Patara was a commercial city and it had a cosmopolitan population; merchants and seamen came from many different countries. Before sailing again they needed to make offers to those specific deities they felt were more able than others to grant them a safe journey. This can be observed also at Ripa, the commercial district of Rome.

On the outside of the walls there is a multitude of stone sarcophagi most of them bearing inscriptions, but all open, and empty. Beaufort
Archaeological excavations have not yet identified Lycian rock-cut tombs such as those of Kaunos or Tlos. There are however many free-standing sarcophagi, some of which have the typical Lycian "Gothic" lid, which is thought to represent a capsized boat.

(above) Round building, thought to be a Roman lighthouse; (below) one of the many inscriptions found near the building

A yield of recent excavation campaigns is a round building on a mound which most likely was located at the northern entrance of the harbour. Due to its shape and position the building is thought to have been a lighthouse. From the number of stones found near its foundations it is likely it had at least five storeys. The most curious thing about this building is the high number of inscriptions, all of a very large dimension, which were found by the archaeologists. They have holes which suggest bronze letters were placed to make the inscription more readable (see a page on Roman inscriptions).

Friends you can meet in Patara

The river Xanthus lies to the north of the city, (..) and its valley has not been explored by Europeans. I have determined to seek a route to Macry up this valley, instead of by sea or across the range of Cragus. (..) We started to see the ruins of the city of Xanthus, which lay at about two miles' distance, upon or overhanging the river of that name. Fellows
The image used as background for this page shows a detail of a relief which decorates the baths.