- Side: 1. The Walls
(theatrical masks at Myra)

Side was founded by Greek settlers from Cyme, near Phocaea in the VIIIth century BC. In 188 BC Antiochus III King of Syria was forced to reach a peace agreement with the Romans and their allies in the Levant: the city-state of Rhodes and Attalus I, King of Pergamum: to the latter he ceded his possessions in Pamphylia, including Side, its most important port which was located at the eastern end of the region.
Attalus felt that he needed a port closer to his kingdom and he founded Attalia (Antalya) in the western part of Pamphylia. As a consequence Side became less important for its new rulers and as a matter of fact it eventually gained an almost independent status. Because of this the many pirates who attacked the ships en route between the Aegean Sea and Syria thought it safe to sell their loot (in particular slaves) at Side. The coast to the east of the town became known as the Coast of the Pirates.
In 67 BC Gneus Pompeus (Pompey) defeated the pirates and brought Side under Roman control. The town retained its importance as a slave-market and in addition it developed trading of olive oil. Most of the monuments for which it is renowned were built or redesigned in the IInd century AD. 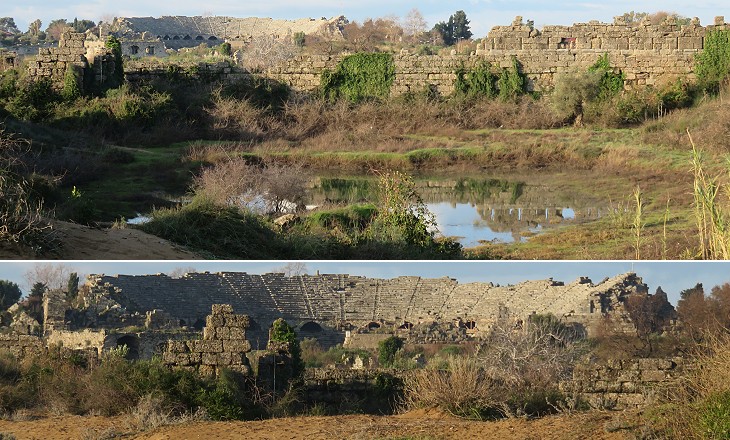 Side stands on a low peninsula (..) The theatre is the most striking feature of Side: at the distance of a few miles from the shore, we had mistaken it for a lofty Acropolis, rising from the centre of the town.
Francis Beaufort, Captain of HMS Frederikssteen, a frigate of 32 guns: Karamania; or a brief description of the South Coast of Asia Minor, and of the Remains of Antiquity collected during a survey of that coast, under the orders of the Lords Commissioners of the Admiralty, in the years 1811 & 1812 - Published in 1817
There being no village near, nor any cultivation of the ground in the neighbourhood, the hidden relics and coins (of Side) will remain for future times to discover.
Charles Fellows - Journal Written during an Excursion in Asia Minor in 1838
In 1895 Side was repopulated with Muslim refugees from Crete; they built their homes on the area between the theatre and the ancient harbour, but by approaching the town from the east one can still relive the experience of the first XIXth century travellers who visited it. 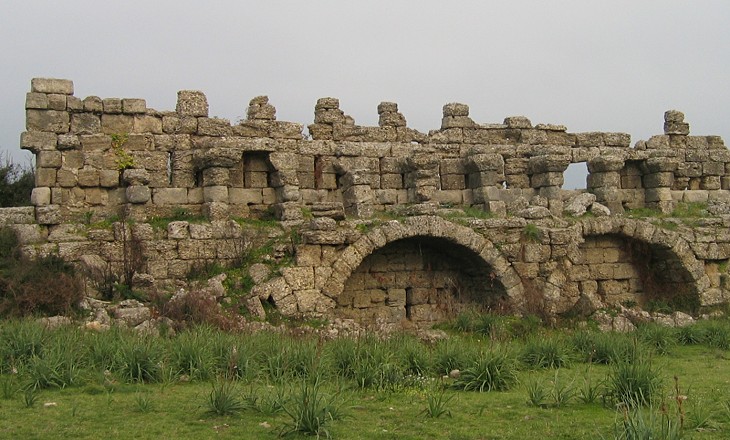 Walls near the site of the land gate (IInd century BC)

(The wall) which faces the land was of excellent workmanship, and much of it is still perfect. It is about thirty-eight feet high, and provided with two galleries or platforms, for the purpose of throwing missile weapons; the lower platform is supported on arches, and is furnished with a tier of loop-holes; the upper one is adapted to the battlements.(..) The land gate was near the obtuse angle of the external walls, but it has been entirely destroyed, together with the tower by which it was covered. Beaufort 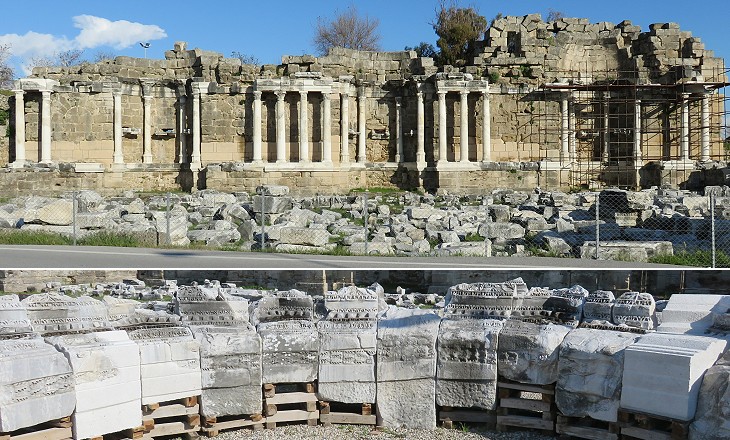 (above) Great Nymphaeum (IInd century AD); (below) the decoration of a niche in the process of being reconstructed. A low relief depicting a wreath on one of its stones can be seen in the image used as background for this page

The last building that we had time to examine, is on the outside of, and facing the land gate. One long wall, yet standing, is divided into three recesses of a concave form; and in the centre of each recess, a few feet from the ground, there is a hole through the wall, with a projecting lip or spout on the inside. The interior of the building had been profusely ornamented. Beaufort
The building described by Beaufort turned out to be a monumental fountain which recalls those at Aspendos and Sagalassos. It is in the process of being reconstructed. In 2008 it did not have as many columns (it opens in another window) as it had in 2015. 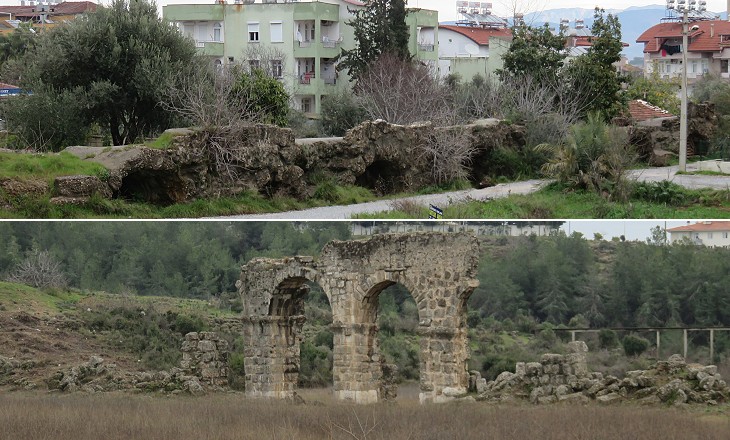 Views of the aqueduct supplying Side at Manavgat

The Great Nymphaeum and other fountains near the theatre were supplied with water by an aqueduct which carried it from a spring some eighteen miles away. It had to cross some low hills so that it often disappeared into long tunnels, similar to the Roman aqueduct at Kemerhisar. The internal conduit was mainly built by using opus caementicium, a mix of mortar and stones. 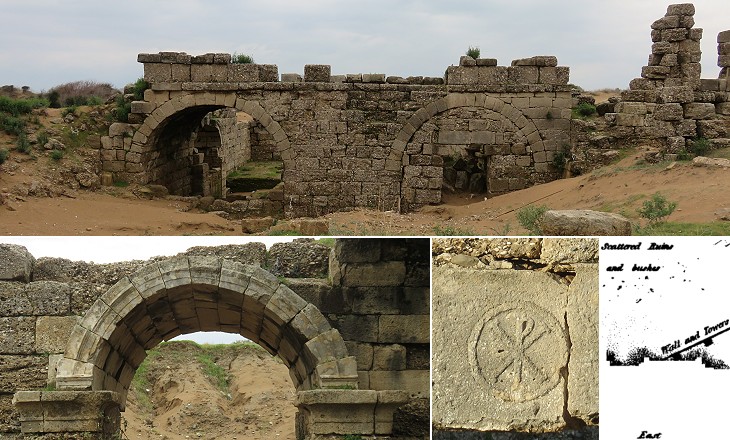 (above) Eastern Gate (Byzantine period); (below-left) arch inside the gate; (below-centre) Christ monogram on a lintel; (below-right) detail of Beaufort's map of Side

In the map drawn by Beaufort the eastern walls of the town disappear under a sand hill, so he did not see the Eastern Gate. This section of the walls was strengthened in the VIth century. The Eastern Gate, perhaps built at an earlier time as a grand entrance to the town, was protected by new towers. It was decorated with reliefs of military subjects which are now at the Archaeological Museum. 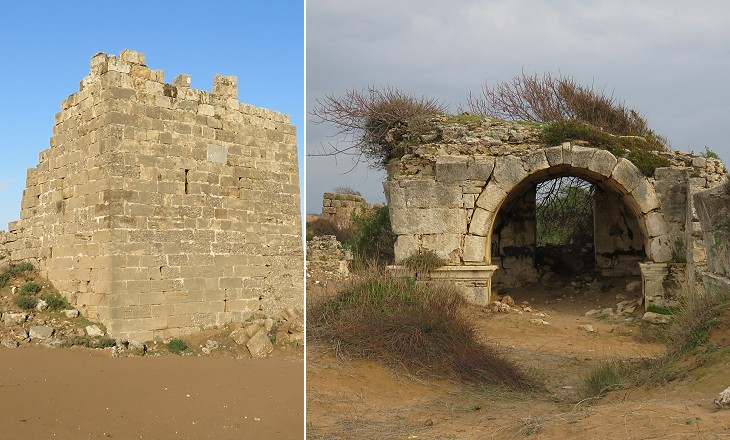 A vast area to the east of the ancient town is still covered by high sand dunes. New excavations might unearth the presence of ancient buildings and tombs, because there must have been a road departing from the gate and leading to a neighbourhood or to some tombs. Church of the Bishop's Palace near the Eastern Gate - image taken in 2008, when the building was not overgrown with vegetation. An image taken in 2015 shows the entrance to the building - it opens in another window. The church had a very small "synthronon" i.e. seats for the bishop and the clergy (you may wish to see that at Hagia Irene in Constantinople)

Side was a bishopric see and the residence of its bishop has been identified in a series of buildings near the Eastern Gate. They form a sort of Christian/Byzantine quarter inside the ancient town. A large Christian basilica was built near the harbour and the theatre was turned into an open air church. 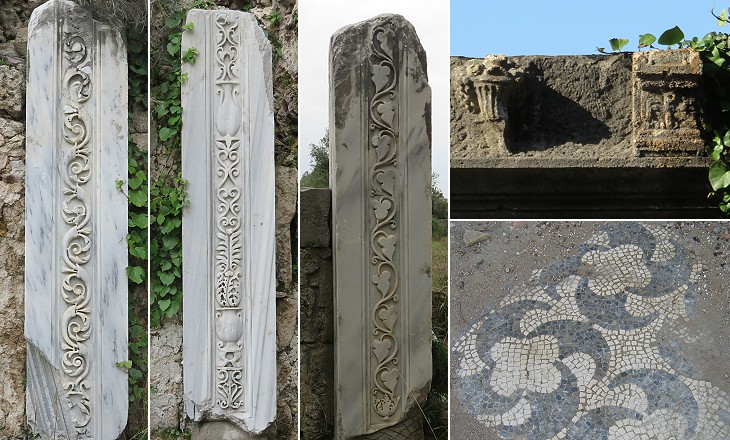 Church of the Bishop's Palace near the walls: details

The presence of columns and capitals indicate that the whole complex was embellished making use of materials taken from prior buildings. The lintels however, because of the style of their decoration, were probably made specifically for the Bishop's Palace. 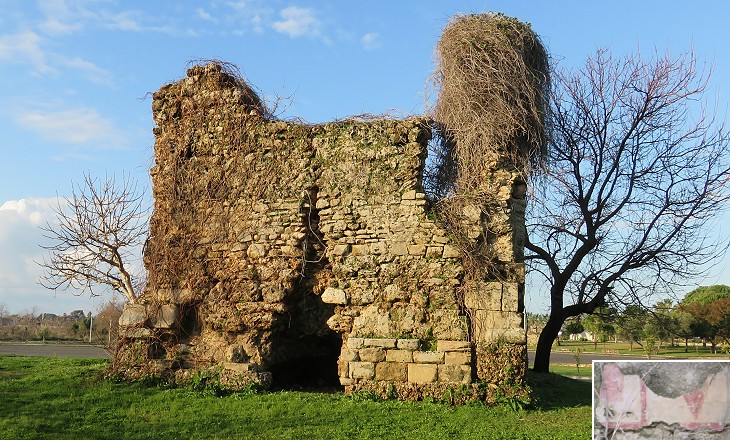 Tomb near the Great Nymphaeum; (inset) fragment of a Seljuk red and white fresco on another side of the tomb

A number of large tombs outside the walls and along the road going inland were reutilized in different ways through the centuries.