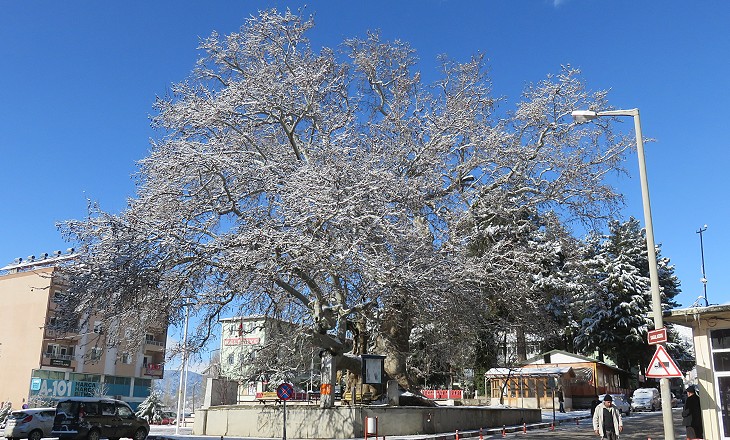 Plane tree at Aglasun (the name of the small town is a corruption of Sagalassos) on January 6, 2015

No other vegetation is yet bursting (in late March), but the walnuts and magnificent planes must be beautiful in their season. I have never seen such stupendous arms to any trees. (..) Here (in a small town) I had to wait two hours for horses; and after piling my baggage under a wide-spreading plane-tree in the open space in the town, my servant accompanied me in search of antiquities. On my suggesting the possibility of the unguarded luggage being stolen during our absence, he replied that the Turks might not steal, their religion forbade it; that the things were quite safe, and the more so from their being left exposed.
Charles Fellows - Journal Written during an Excursion in Asia Minor in 1838
According to tradition Hippocrates practiced medicine under the shade of a plane tree (Am. sycamore) at Kos. Similarly the Janissaries used to rest and have their meals under the shade of a plane tree at Topkapi Sarayi in Constantinople. Most small towns and villages throughout Greece and Turkey had a plane tree in their central square.
Aglasun, similar to Rumeli Feneri, retains a large plane tree which is the meeting point of the town. In winter the four mile road to Sagalassos very often is not passable because of snow and no taxis wait for ruin-addicts at the plane tree. 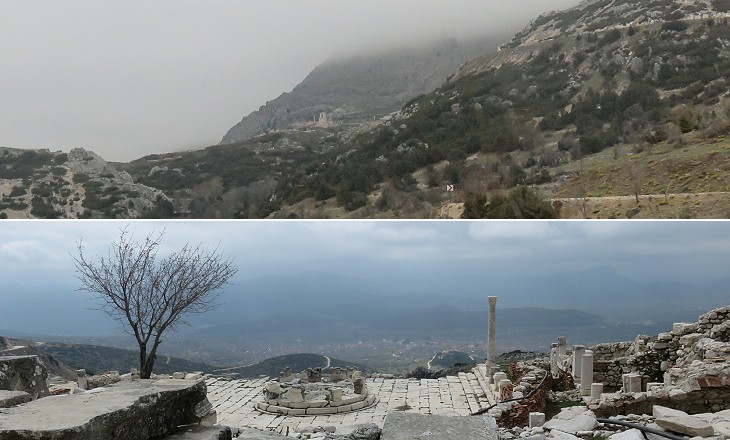 Views on April 8, 2015: (above) the Heroon of Sagalassos seen from the road from Aglasun; (below) Aglasun seen from Sagalassos; in the foreground the Macellum, a food market with a circular basin built at the time of Emperor Commodus

We soon began to ascend the mountain; and seeing it now, naked, without snow, I was astonished that we could ever have reached the summit; so full of rocks and enormous chasms, deep enough to cover twenty horses, but in 1826 presenting one smooth, uniform surface. Great cause, indeed, had we for gratitude to the preserving mercy of God, for no hand but his could have guided us safely to the summit. It was extremely difficult to ascend even to day (November 1833), and a work of considerable time; - how much more fearful when covered with snow!
Francis Vyvyan Jago Arundell - Discoveries in Asia Minor - 1834
We passed much snow, and were visited by a storm of small pieces of ice, of broken forms and transparent; this was succeeded by beating rain and snow as we descended towards the valley of Alaysoon, where in two hours we arrived thoroughly drenched. However, hearing of some ruins within a few miles, I risked the repetition of the storm, and walked about three miles again up the mountain, through a craggy wilderness, into which I feared the peasant took me only to see some tombs cut in the rocks, as the situation appeared too high and dreary for the living of any age. (..) April 1st. We left the valley of Alaysoon in a snowstorm, which had covered the ground nearly a foot deep. C. Fellows
Aglasun is situated at an altitude of 1,140m/3740ft and Sagalassos at 1500/1700m (4920/5570ft). It is difficult to imagine that a sizeable ancient town could prosper at such an altitude, unless the climate of the region was warmer than it is today. 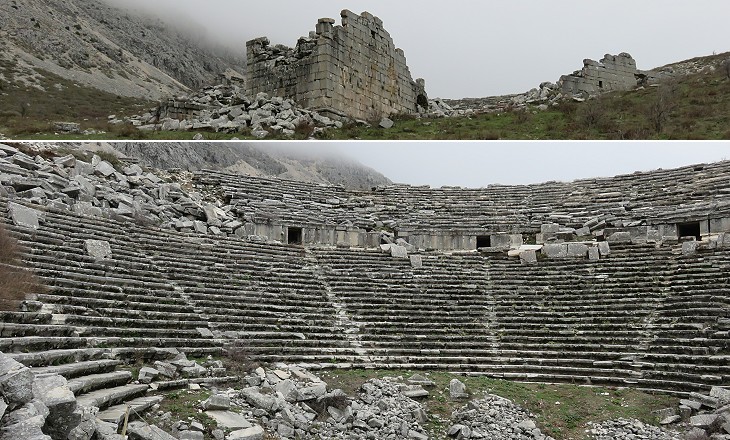 Theatre: (above) front; (below) cavea. Its eastern (right in the photo) part was built against the natural hillside and it has less suffered from earthquake damage

On the side of a higher hill is one of the most beautiful and perfect theatres I ever saw or heard of; the seats, and the greater part of the proscenium remain; the walls of the front have partly fallen, but the splendid cornices and statuary are but little broken. I walked almost round, in the arched lobby, entering as the people did about two thousand years ago. Eight or nine venerable walnut-trees have done some damage, by heaving up the seats. From its peculiar situation I judge that this theatre was entered only on one side, where appeared three or four vomitories (passages through which big crowds can enter/exit rapidly) together. C. Fellows. A few days later Fellows visited the theatre of Aspendos. Theatre: proscenium. This part of the theatre was most likely rebuilt at the time of Emperor Marcus Aurelius

The theatre most strongly attracted our attention, being in a state of preservation superior even to those of Hierapolis and Laodicea (a town near Hierapolis). I could almost fancy the crowds of ancient days rushing in at the different portals, and impatiently taking their places. The seats, forty in number, were almost as perfect as if still in use; and a considerable portion of the proscenium and entrance was nearly as perfect. The orchestra was covered with snow, as well as a large heap of stones close to the proscenium. (..) My apprehensions, while in the dark, vaulted passage of the corridor, were not altogether fanciful. Mr. Dethier heard a rustling in a thicket near him, and had the agreeable sight instantly after of a wild boar within six feet of him; the long, curved, ivory tusks, displayed with full effect upon the black bristly coat. Fortunately, the wild boar, unless attacked, does not alter his line of march; and therefore, though Mr. Dethier was so near him, he only gave a horrible grunt, and then moved on. F. V. J. Arundell 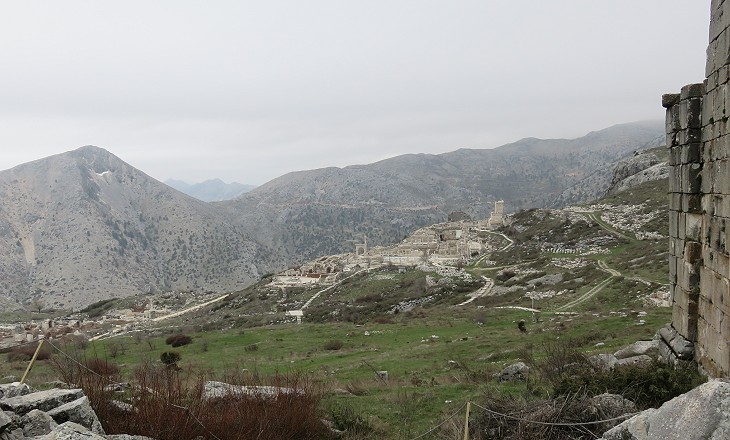 The siege by Alexander is thus described by Arrian: "He went and encamped before Sagalassus, which is a strong place, and was well provided with the flower of their forces for its defence; for though all the Pisidians are warlike and brave, yet the Sagalassenses are esteemed the stoutest of them all. (..) Having more confidence in their own courage than in their walls, had drawn up their army on a neighbouring hill - a hill in advance of their town; and by reason of the advantage they had of the ground, they repulsed the light-armed forces Alexander had sent against them. However, the Agrians (the light-armed forces) made an obstinate resistance, and seemed to be encouraged by the approach of the Macedonian phalanx and the king's presence, whom they beheld before the colours. The soldiers laboured under great difficulties while they forced their way up the hill; but as soon as they had got a little firmer footing, they easily dispersed the multitude of mountaineers that were but half armed." F. V. J. Arundell 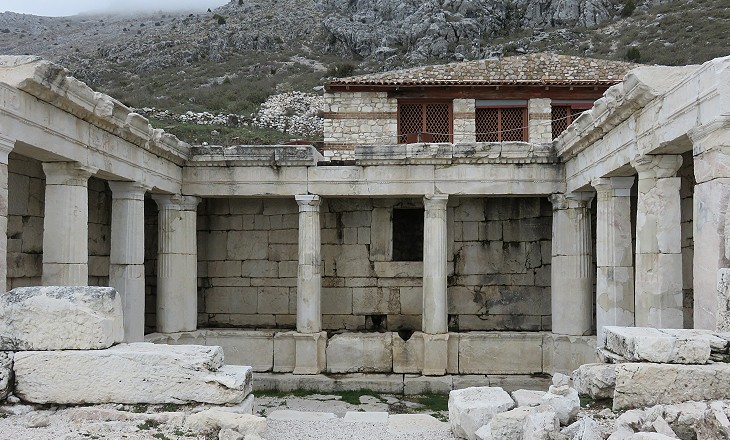 Reconstructed Hellenistic fountain near the theatre. It is dated 50-25 BC and its location indicates that a new neighbourhood was developed between the oldest part of the town and the theatre

Not sufficiently acquainted with ancient architecture, it was impossible for me to make out the original appropriation of half the ruins, of which the foundations and immense heaps of materials remain. F. V. J. Arundell
I know not what these buildings may have been, but from their forming long avenues I imagine they were agoras. The whole of the city (..) is ancient Greek, without a vestige of Roman or Christian character. C. Fellows
There is I believe no other ruined city in Asia Minor the situation and extensive remains of which are so striking or so interesting or which give so perfect an idea of the magnificent combination of temples, palaces, porticoes, theatres and gymnasia, fountains and tombs which adorned the cities of the ancient world.
William Hamilton - Researches in Asia Minor, Pontus and Armenia - 1842
Notwithstanding the accounts of so many travellers, systematic excavations at Sagalassos were not carried out until the 1990s. They revealed that, contrary to Fellows' opinion, most of the monuments were built after the Romans had acquired full control over Pisidia in the Ist century BC. Reconstructed Heroon, a shrine dedicated to a local hero. It was built at the time of Emperor Augustus. In the early Vth century it was turned into a tower of the walls. The image used as background for this page shows a relief on its side wall

The whole town was a pile of superb public buildings, arranged in excellent taste, both for seeing and being seen; the ruins are, for so elevated a spot, extensive, and in their mountainous situation are wildly grand. C. Fellows.
Notwithstanding the long period during which the archaeological site was neglected, its remoteness protected it from widespread looting and vandalism. The Belgian team of archaeologists in charge of the excavations, supported by Turkish authorities and experts, have rebuilt many of the ancient monuments of the town. The Heroon, because of its position at the top of the Upper Town, has become the landmark of Sagalassos. 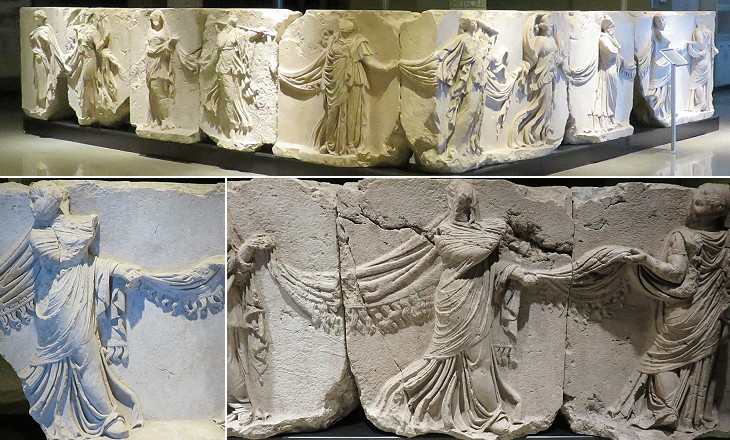 Archaeological Museum of Burdur: frieze of dancing girls from the Heroon of Sagalassos

From the island of Samothrace comes a frieze of young maidens dancing (dated 340 BC). (..) On the best known fragment, the maidens are arranged in facing pairs, all dancers holding the right-hand wrist of the dancer in front of her forming a continuous line. (..) Every second dancer, the ones turning backwards to face their immediate dancing companion, wears a shawl-like garment draped over the shoulders.
Matthew Dillon - Girls and Women in Classical Greek Religion - London/New York 2002
There is a great continuity between the subjects of statues and reliefs of Classical Greece and those of Imperial Rome. Most masterpieces of the former are known only after copies of the latter.
Dancing girls were often depicted in reliefs decorating theatres as at Philippi or in a more enticing way as maenads (followers of Dionysus) as at Pompeii. 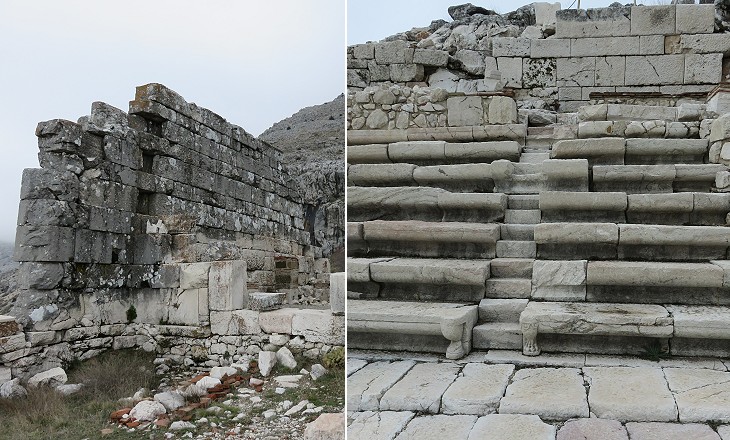 (left) Temple to Zeus (built between 50 and 25 BC and turned into a tower of the walls in the early Vth century); (right) Bouleuterion, hall where the city council met, which eventually housed a church

A major earthquake struck Sagalassos in 518 and prior to that event the population of the town had already shrunk and adopted Christianity. Churches replaced temples, new walls reflected the loss of security throughout the Empire and reduced resources did not allow for the reconstruction of fountains and other facilities damaged by earthquakes.
Archaeologists are always confronted with difficult choices when they deal with an ancient town with a long history. By and large the monuments of Sagalassos have been brought back to the appearance/purpose they had in the IInd century AD, when Emperor Hadrian visited Sagalassos and gave the town the title of "First City of Pisidia". You may wish to see a page on Troy where archaeologists have followed a different approach. During my solitary visit to the archaeological site Sagalassos conveyed to me a feeling of remoteness from the entire world, yet its inhabitants of olden times were informed in a timely manner about political developments in Rome. They had dedicated an arch which gave access to the Bouleuterion to Emperor Caligula, but in 42 AD, one year after the killing of the emperor, they changed the dedication to Emperor Claudius, his successor. They did so because of Caligula's damnatio memoriae, literally "damnation of memory", which entailed the removal of all references to him. 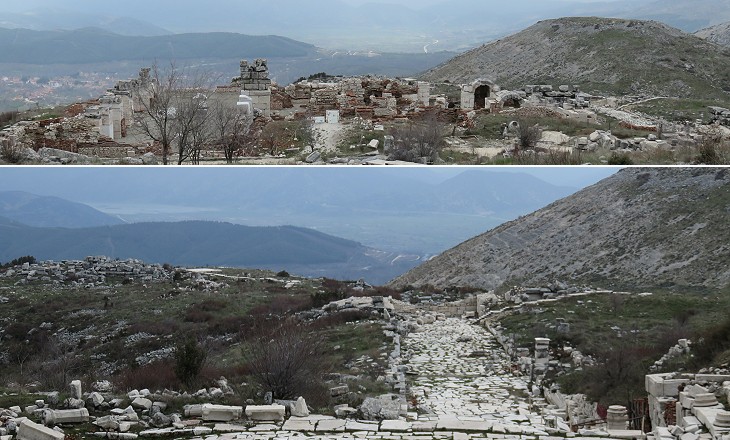 (above) Overall view of the Lower Town; (below) street which led from the Lower Town to a Temple to Emperors Hadrian and Antoninus Pius (ruins on the far left)

Maybe in five or ten years from 2015 visitors to Sagalassos will first notice the ancient town because of a very large reconstructed temple to Emperors Hadrian and Antoninus Pius. It was built on a terrace at the end of the Lower Town in a position which made it visible from afar, similar to the Temple to Trajan at Pergamum. The last inhabitants of Sagalassos lived in dwellings nested inside this temple until the XIth century when they moved down to a new settlement in the valley which they continued to call Sagalassos, i.e. today's Aglasun.

Move to page two and see some other monuments of the "golden age" of Sagalassos or move to:
Introductory page
Isparta
Egirdir
Afyonkarahisar
Kutahya