High barrows, without marble, or a name,
A vast, untilld, and mountain-skirted plain,
And Ida

(a mountain) in the distance, still the same,
And old Scamander (a river), (if tis he) remain;
The situation seems still formd for fame
A hundred thousand men might fight again
With ease; but where I sought for Ilions walls,
The quiet sheep feeds, and the tortoise crawls; Lord Byron shared the common opinion that Homer's poems contained a foundation of truth: that there had been a city called Troy or Ilion, not Greek, but inhabited by a civilized tribe, of a certain wealth and importance, and that it had been the object of an attack which had ended in its destruction.
Historians regarded the War of Troy as a symbolic account of the Greek expansion into the Asian shore of the Aegean Sea. 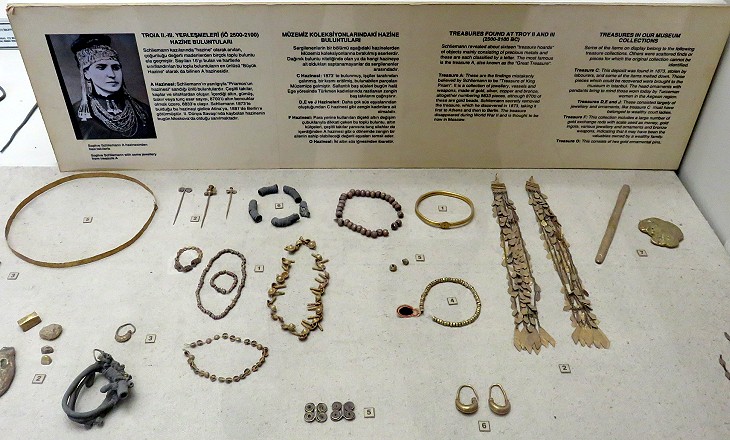 Archaeological Museum of Istanbul: jewels found at Hisarlik and photo of Heinrich Schliemann's wife wearing some of those which were part of "Priam's Treasure"

I travelled by the Scamander, some miles before it joins with the Simois. I crossed from it to the south west over that high ground which is between the two rivers; descending a little above the confluence of the waters: I thought it would be in vain to search on this height for the ruins of old Troy, where it is supposed to have been; all this part being now covered with wood; and the site of it was not known seventeen hundred years ago.
Richard Pococke - A Description of the East and Some Other Countries - 1745
The search for the actual site of Troy ended in May 1873, when German pioneer archaeologist Heinrich Schliemann found "Priam's Treasure" during excavations at Hisarlik (hisar means castle in Turkish), a low hill in north-western Anatolia.
Schliemann assumed that the jewels he found had been hidden by Priam, the last king of Troy, when his city was about to be seized by the Greeks. He donated most of "Priam's Treasure" to Germany. The jewels became one of the main exhibits of the Pergamon Museum in Berlin which was built in 1910-1930 to house the country's archaeological collections. "Priam's Treasure" disappeared at the end of WWII. In 1993 it turned up at the Pushkin Museum in Moscow where it still is. 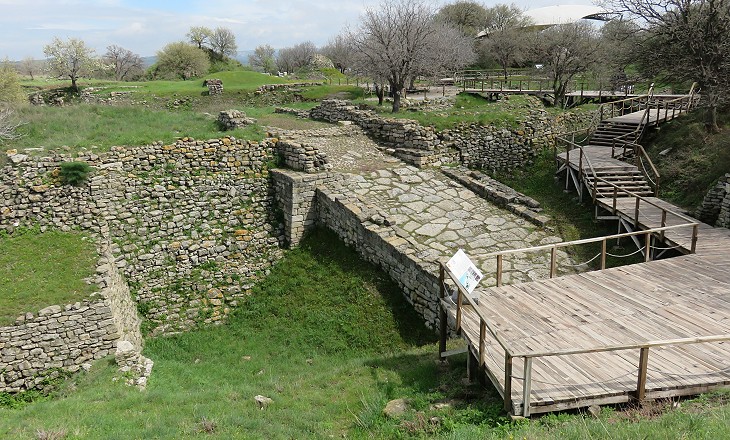 Close to the walls, advancing o'er the fields
Beneath one roof of well-compacted shields,
March, bending on, the Greeks' embodied powers,
Far stretching in the shade of Trojan towers.
Great Hector singly stay'd: chain'd down by fate
There fix'd he stood before the Scaean gate;
Still his bold arms determined to employ,
The guardian still of long-defended Troy.

Homer - Iliad - Book XXII - Translation by Alexander Pope
Schliemann dug a large trench on the western side of the hill, where according to tradition the Scaean Gate stood. He found a thick layer of ashes and evidence of walls beneath them. The ashes were assumed by Schliemann to have been caused by the fire the Greeks set to the city after having seized it. A well-constructed ramp was believed to be a ceremonial entrance to the city. 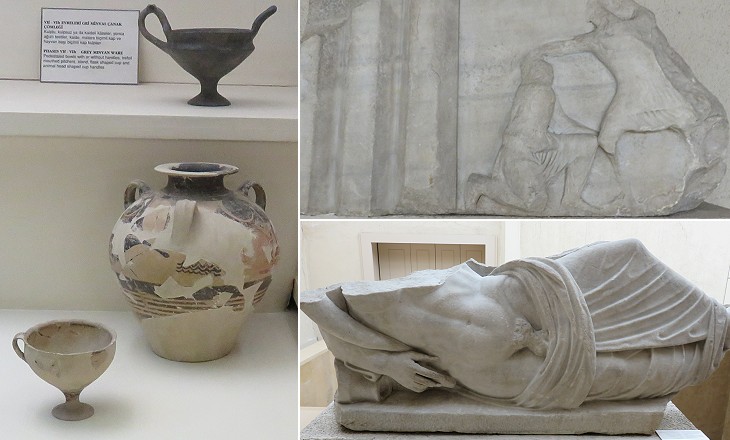 In 1876 Schliemann undertook an excavation campaign at Mycenae where he found a series of tombs and other jewellery. He afterwards conducted three other excavation campaigns at Hisarlik (today's Truva). The findings of these campaigns clearly indicated that the site had been inhabited several times over a period of 2,500 years. Schliemann maintained that the walls on the western side of the hill and "Priam's Treasure" were related to the city chanted by Homer. 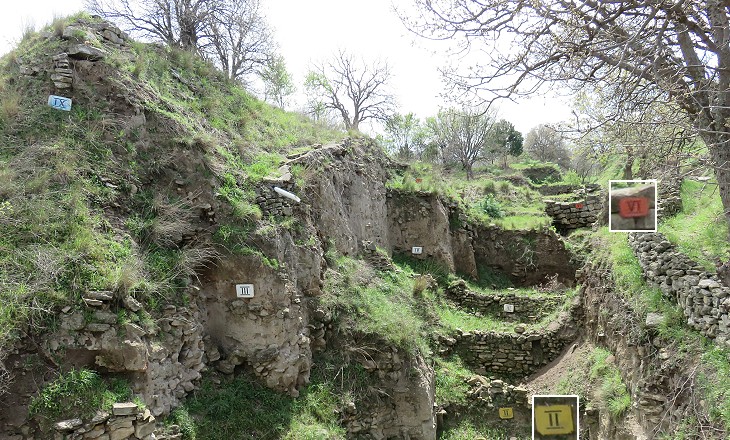 Today archaeologists concur in saying that Hisarlik contains evidence of nine settlements. (I) is the oldest and deepest one and (IX) is related to a Roman town and stands on the surface of the hill. The most important ones are (II - yellow label) and (VI - red label). Troy II is that found by Schliemann and is dated before 2,000 BC. It is therefore not consistent with the general dating of the War of Troy (ca 1,200 BC). Recent archaeological research indicates that Troy II could have been Wilusa, a town mentioned in records of the Hittite Empire. Troy VI was protected by huge walls and its dating is consistent with that of the War of Troy. 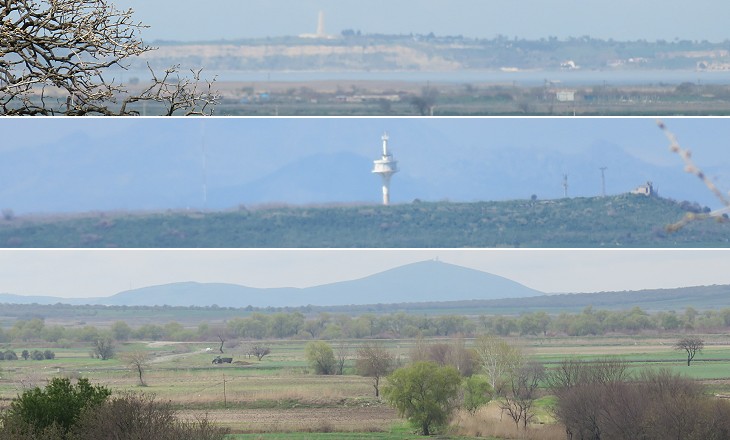 Views towards: (above) the Dardanelles at Seddulbahir; (middle) the mast of a passing ship and behind it Imbro (Gokceada) and Samothrace; (below) Tenedo (Bozcaada)

In sight of Troy lies Tenedos, an isle
Renown'd for wealth; but, since, a faithless bay,
Where ships expos'd to wind and weather lay.
There was their fleet conceal'd. We thought, for Greece
Their sails were hoisted, and our fears release.

Virgil - Aeneid - Book II. Translated by John Dryden
Hisarlik is not as close to the sea as the Iliad suggests, or rather some later Roman accounts indicate (e.g. the episode of the sea serpents which choked Laocoon - see page two). The Iliad does not mention Trojan warships or a Trojan harbour, but undoubtedly the site of Hisarlik allowed control over the ships passing through the Dardanelles, especially assuming that the ancient coastline was slightly closer to it. 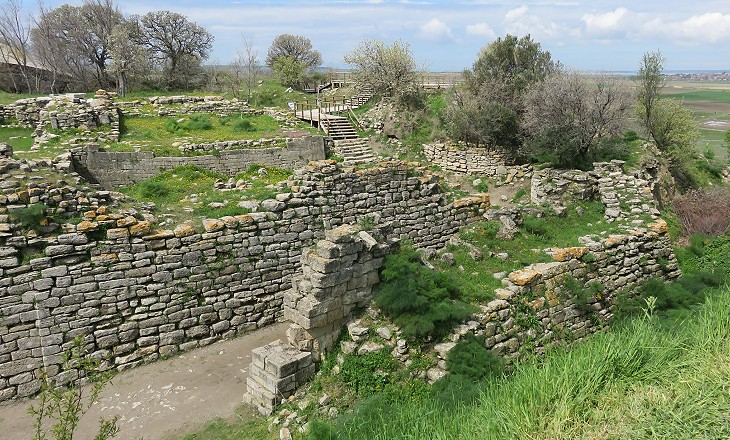 Excavations on the eastern side of the hill have unearthed thick walls which are consistent with the idea we have of those of Homer's Troy. They had projecting towers that protected gates. 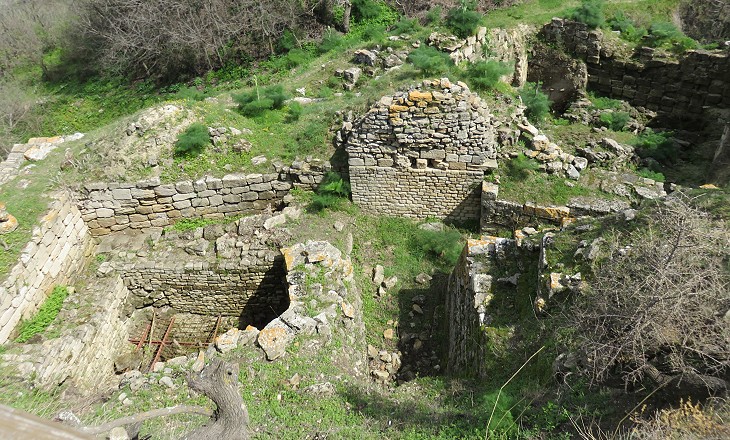 Archaeological excavations continue to be carried out. The focus is on Troy VI, the only settlement which can be associated with mythical Troy.
The hill however lacks the proper size to favour visitors' identification with the heroes of the War of Troy. A javelin thrown by Ajax, the strongest of all the Acheans (Greeks), at the western side of the hill could have hit another Achean warrior fighting at the eastern side. Schliemann explained in a book about his findings at Hisarlik that the hill was just the citadel of a larger settlement, of which however he did not find the walls. It contained only the megaron (palace) of the king and temples. One of them was dedicated to Athena and housed the Palladion, a wooden statue donated by the goddess which ensured the safety of the city. Megarons have been unearthed in other ancient towns roughly contemporary to Troy VI (e.g. Mycenaeand Phaistos). Trojan Horses: (left) at Canakkale (it was made for the movie "Troy"); (right) at the archaeological site

Ulysses said to Demodocus, "Demodocus, there is no one in the world whom I admire more than I do you. You must have studied under the Muse, Jove's daughter, and under Apollo, so accurately do you sing the return of the Achaeans with all their sufferings and adventures. If you were not there yourself, you must have heard it all from some one who was. Now, however, change your song and tell us of the wooden horse which Epeus made with the assistance of Minerva, and which Ulysses got by stratagem into the fort of Troy after freighting it with the men who afterwards sacked the city. If you will sing this tale aright I will tell all the world how magnificently heaven has endowed you." The bard inspired of heaven took up the story at the point where some of the Argives set fire to their tents and sailed away while others, hidden within the horse, were waiting with Ulysses in the Trojan place of assembly. For the Trojans themselves had drawn the horse into their fortress, and it stood there while they sat in council round it, and were in three minds as to what they should do. Some were for breaking it up then and there; others would have it dragged to the top of the rock on which the fortress stood, and then thrown down the precipice; while yet others were for letting it remain as an offering and propitiation for the gods. And this was how they settled it in the end, for the city was doomed when it took in that horse, within which were all the bravest of the Argives waiting to bring death and destruction on the Trojans. Anon he sang how the sons of the Achaeans issued from the horse, and sacked the town, breaking out from their ambuscade. He sang how they overran the city hither and thither and ravaged it.
Homer - Odyssey - Book VIII - Prose translation by Samuel Butler. Florence - Galleria Palatina: Alexander the Great places Homer's Iliad and his dagger under his pillow (as reported by Plutarch), fresco by Ciro Ferri (1659-1661)

The image used as background for this page shows a bust portraying Homer at Palazzo Nuovo del Campidoglio in Rome.
Move to page two - Roman Troy.