- Phaistos
(Painting showing a bull-leaping exercise found at Knossos, now at the Archaeological Museum of Iraklion)

Crete is a very mountainous island with peaks reaching over 8,000 ft. Mount Ida, its highest mountain which stands at the centre of the island, was chosen by Rhea to hide the infant Zeus to protect him from his father Cronus. Mesara, the only plain of the island, is located south of Mt. Ida and it stretches some thirty miles in an east-west direction whereas its width does not exceed five miles. 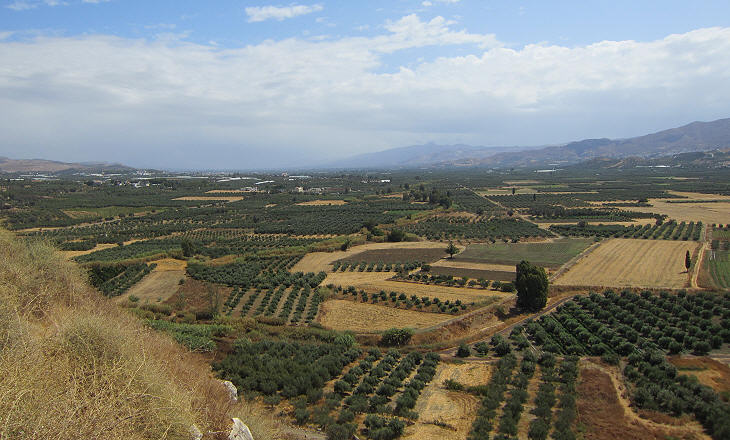 View over the Mesara plain from Phaistos

The Mesara plain was the site of very early settlements; its first inhabitants utilized clay deposits from the hills to its south for developing elaborate pottery. The town/palace of Phaistos was located on a hill at the western end of the Mesara plain; it was closer to the coastline than it is today because alluvial deposits have enlarged the valley. Phaistos was therefore the terminal of trading routes between Crete and Egypt, whereas Knossos, near the northern coast of the island had the same function towards the rest of Greece. 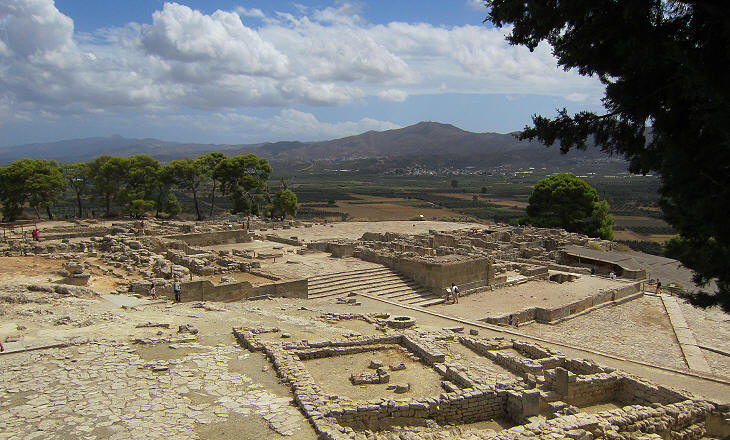 Overall view of the archaeological site

Archaeologists have identified two different phases for the construction of the palace/town; the first phase is dated 2000-1650 BC while the main courtyard was utilized again for a smaller complex in ca 1400 BC. The hill was surrounded by walls at a later period, when Phaistos was threatened by Gortyn, another town in the Mesara plain.
Unlike what occurred at Knossos, reconstruction of the ancient buildings has been kept to a minimum; the ruins are much less imposing than those at Knossos, but the site has a more evocative power. Excavations were mainly carried out by Italian archaeologists in the first half of the XXth century. 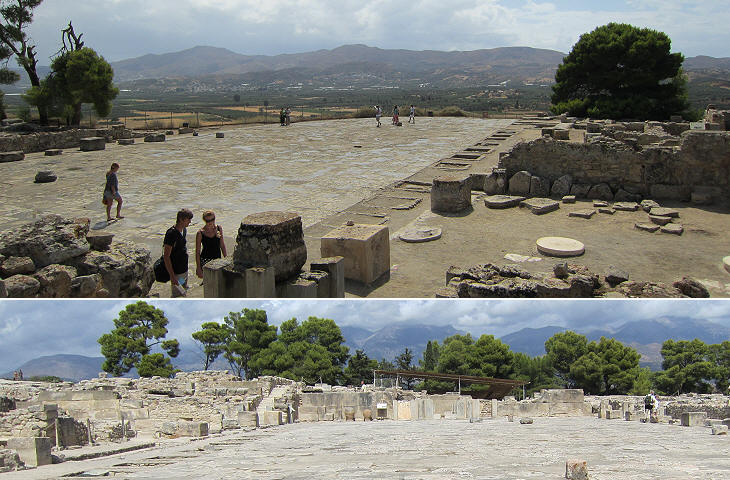 Views of the central courtyard

Similar to Knossos the complex of buildings was arranged around a very wide central courtyard. It is actually the only large space of the palace and it is likely it was used for religious ceremonies as archaeologists have not identified buildings which could be labelled as temples. 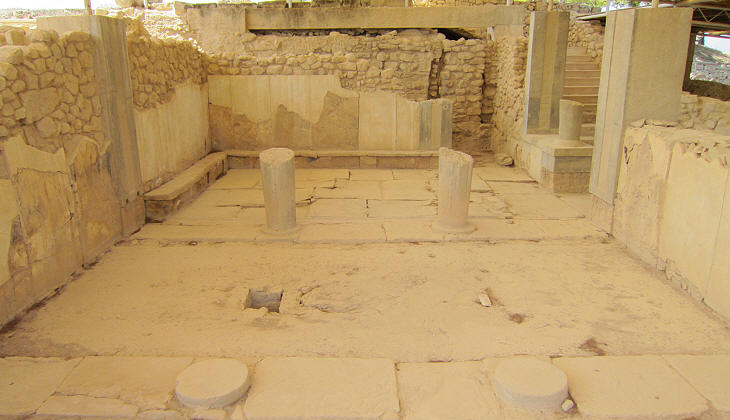 The northern part of the town housed two large rooms which were decorated with Egyptian alabastrine gypsum panels; they have been named as residences of the King and of the Queen; the half columns are modern concrete reconstructions; in general the site of the ancient wooden columns is indicated by a circular stone. Archaeologists at Phaistos did not find evidence of the columns being noticeably tapered as at Knossos. 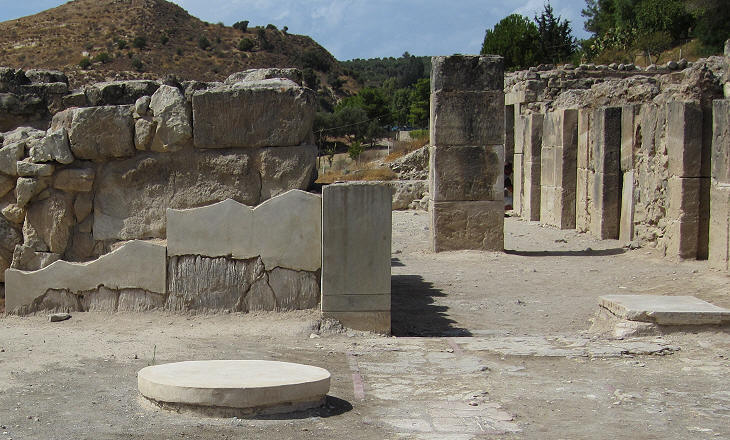 Hall of the Columns and passage flanked by warehouses

Alabastrine gypsum panels were employed also for the decoration of a small hall near the central courtyard; because of its location it was probably utilized for some public purpose. 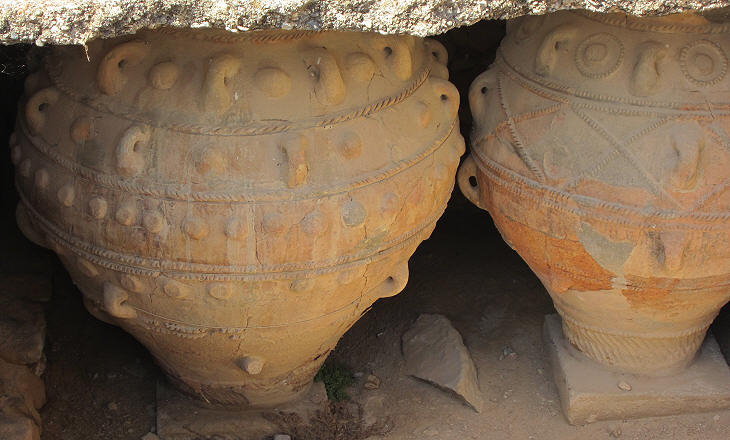 Olive oil, wine and cereals were stored in very large jars and in considerable quantities in specially built warehouses near the central courtyard. The presence of these storage facilities has led archaeologists to believe they were part of a centrally regulated distribution system of key commodities which involved the levying of taxation on them. The lugs on the jars were not merely decorative, but they allowed the passage of ropes for handling. 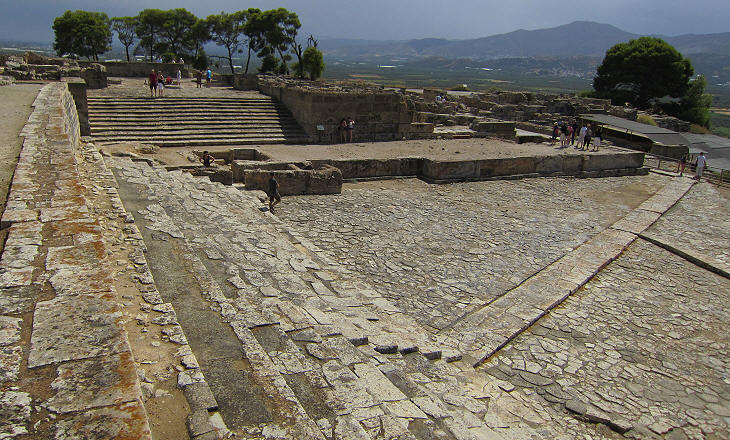 The earliest form of theatre is most likely that found at Phaistos; the height of the steps clearly indicates that the purpose of the facility was to allow a clear vision of an event to a large number of people; archaeologists have made several hypotheses, including bull fighting, about the performances which took place in the theatre; because of its location along the road leading to the central courtyard it is likely people gathered there to see religious processions or the arrival of the king with his army. 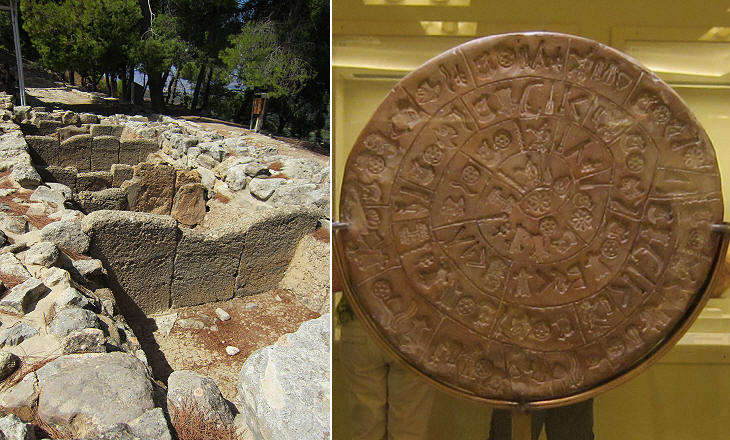 The Disk of Phaistos was found in 1908 in one of a series of very small rooms which were accessible only from the roof; these rooms contained ashes, bovine bones and funerary related objects. The disk has puzzled archaeologists since its discovery; a number of theories have been developed to explain the significance of the symbols on its two sides, but without reaching a generally accepted conclusion. Some have noted that symbols of male activities prevail on one side and symbols of female activities on the other one; other theories have pointed out that the symbols are placed in a spiral and that the disk has the overall shape of a marine shell so that it should represent something linked to seafaring; an astronomical interpretation upholds that the disk represents the sun and the moon. The technique utilized for carving the symbols is unique and it is seen as a forerunner of movable type printing; this led some to believe the disk has an extra-terrestrial origin or that it is a forgery. 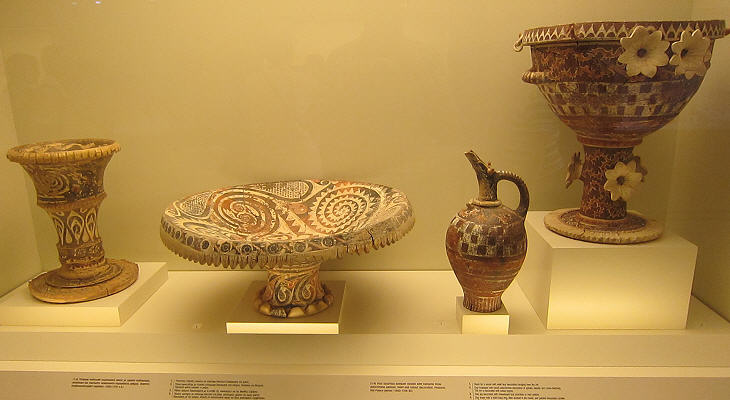 Archaeological Museum of Iraklion: pottery found at Phaistos (ca 1800 BC)

The disk is not the only very elaborate ceramic artefact found at Phaistos; a series of vases of the so called Kamares style (after a cave on Mt. Ida) show the impressive level of skill achieved by Cretan pottery makers. 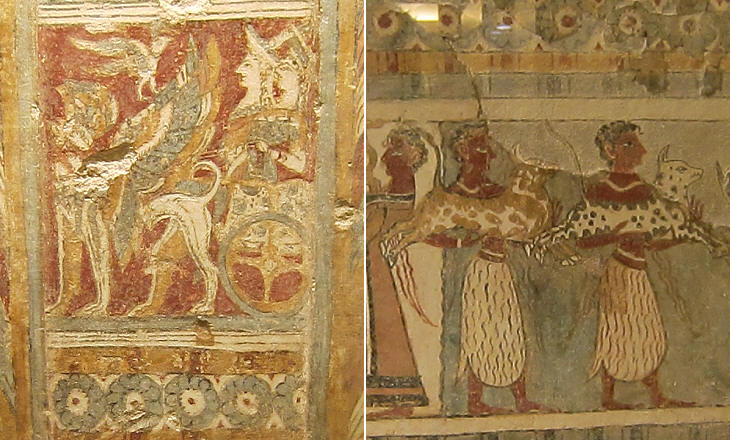 Archaeological Museum of Iraklion: details of the sarcophagus found in 1903 at Agia Triada, near Phaistos

The sarcophagus found at Agia Triada is the output of three different civilizations; it has been dated XIVth century BC, a period when Crete was no longer in a hegemonic position in the Aegean Sea; its power had diminished in favour of Mycenae, Argos and Tiryns, towns in the eastern part of Peloponnese. The Cretans did not have major funerary rites, so the use of a limestone sarcophagus coated with plaster and the subjects painted on it are evidence of Mycenaean influence (see the tombs of Mycenae); however the iconographic convention in portraying human beings indicates strong links with contemporary Egyptian paintings.

The image in the background of this page shows a clay bull (ca 1000 BC) found at Phaistos, now at the Archaeological Museum of Iraklion.

Move to Knossos or Gortyn.