Sultan Mehmet II conquered Constantinople in 1453 and soon after developed plans to defend the new capital of his empire. There was little to worry about a possible attack from the Bosporus. Genoa, notwithstanding its neutrality during the siege of Constantinople, had to agree to dismantle its fortifications in Galata. Apart from a few Genoese colonies at Amastri and Sinope and the small Byzantine Empire of Trebizond, the Black Sea did not house any naval threat to the Ottoman territories.

Kale Sultanieh (left) and Kilitbahir (right) in a view of the Dardanelles (the long strait between the Aegean Sea and the Sea of Marmara) in 1915. The man watching the events is Kemal Ataturk, the founder of modern Turkey. The image used as background for this page shows a detail of this pottery relief

The Hellespont was so called by the antients, because Helle attempting to swim over here on the ram with the golden fleece, was drowned: The Europeans call it the Dardanels, as well as the castles about the middle of it. (..) The whole length is about twenty-six miles, the broadest part is not computed to be above four miles over. (..) The land on each side the Hellespont is mostly hilly, especially to the west.
Richard Pococke - A Description of the East and Some Other Countries - 1745
Mehmet II was worried about an attack similar to that which occurred during the 1204 Fourth Crusade. On that occasion a powerful Venetian fleet had supported the crusaders who laid siege and eventually conquered Constantinople.
Venice directly controlled the largest islands of the Aegean Sea (Crete and Negroponte) and (through Venetian families) the Duchy of Nasso, which included most of the small islands.
In 1454 the Sultan, in order to gain time and to avoid an immediate confrontation, signed a trade agreement with Venice which granted very favourable terms to the Republic. He profited from the peace with the Venetians to consolidate his power by seizing Mistrà, the last Byzantine possession, as well as the Genoese colonies in the Black Sea and the Empire of Trebizond.

The fortress seen from the Dardanelles

At the south end of it are the Dardanel castles. (..) The castles are sometimes called by the Turks Bogas Hissar (The castles of the entrance); but that to the east is called Natoli Eskihissar (The old Asia castle); it is a high square building, encompassed with an outer wall and turrets. Pococke
The expansion of the Ottomans in Europe led Pope Pius II to put pressure on the Christian nations to join forces to free Constantinople. The Venetians feared that the Ottomans might reach the Adriatic Sea by conquering Albania and in 1462 they indirectly supported the rebellion of Scanderbeg, an Albanian warlord. Both sides knew that war was inevitable and Mehmet decided to build two fortresses at the entrance to the Dardanelles to prevent the Venetians from attacking Constantinople. 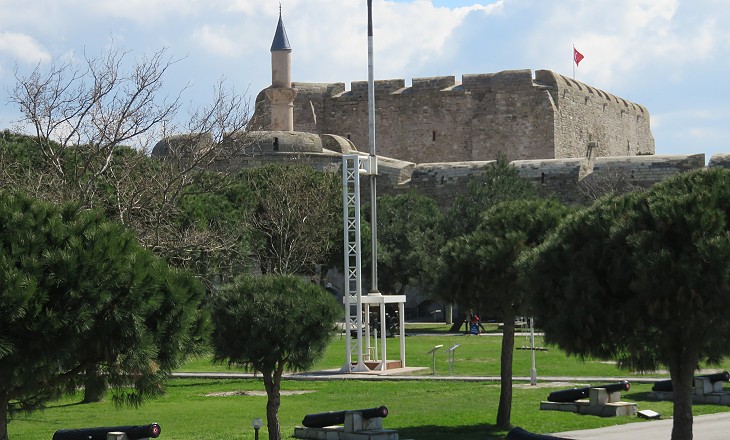 There are fourteen large brass cannon without carriages on the sea shoar; they are always loaded with stoneball, ready to sink any ship that would offer to pass without coming to anchor, in order to be searched: They fire likewise with ball, in answer to any ship that salutes the castles: As this does much damage where they fall, so the lands directly opposite commonly pay no rent; there are eight other cannon towards the south. Pococke
The fortress on the Asian coast was also known as Kale Sultanieh (Sultan's Castle). Today it is formally called Çimenlik Kalesi (Lawn Castle), a reference to the park on its sea side. 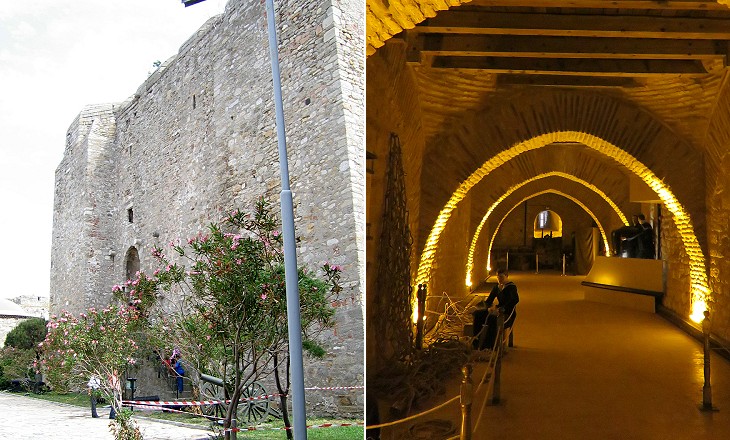 (left) The keep; (right) interior housing reconstructions of events which occurred in 1915

The fortress is still a possession of the Turkish Navy and access to some of its sections is not allowed. Its walls had a square shape: a large round tower protected the main entrance. A keep served as residence for the officers and provided an opportunity for a last resistance. 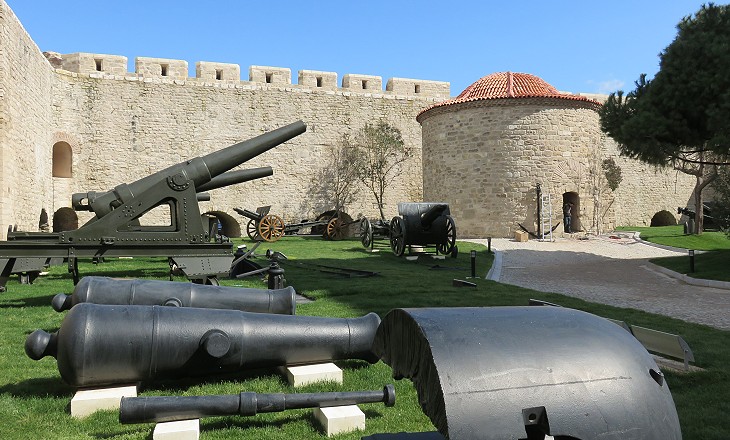 A section of Kale Sultanieh is open to the public. Visitors receive detailed lectures on the events of 1915 which the Turks regard as a founding moment of their modern nation. 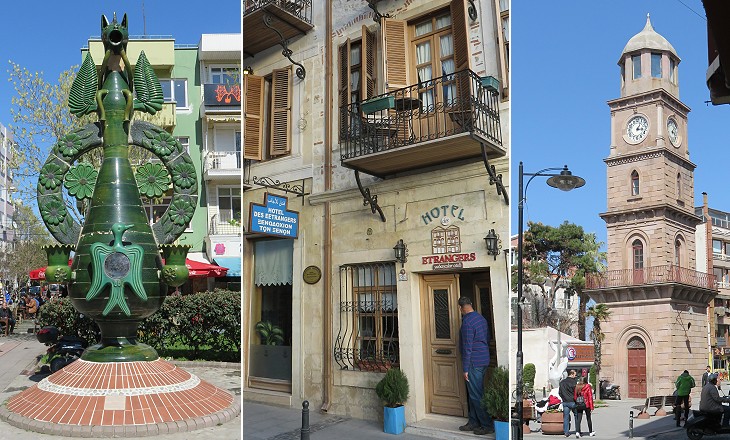 (left) Monument to the typical jars of the town; (centre) Hotel des Etrangers, the oldest hotel in Çanakkale; (right) clock tower built by the Italian consul in 1897

The town on the north side of the castle is a mile and a half in circumference, and has in it twelve hundred houses, two hundred of which are Greeks, a hundred Armenian, and fifty of Jews. They have a great manufacture both here and on the other side, of cotton and sail-cloth and they make here a sort of ware like that of Delft, which is exported to the value of fifteen thousand dollars a year: They also send out some wax, oil, wool, cotton, and cotton yarn; and build small ships. Pococke
On November 3, 1915 British and French warships shelled the fortresses at the entrance to the Dardanelles and two days later Britain and France formally declared war on the Ottoman Empire. At the outbreak of the war Çanakkale (Castle of the pottery) was a small, but busy and cosmopolitan port of call on the shipping lane to Constantinople. The quarter by the harbour was rebuilt after an 1836 fire and it had a modern aspect with hotels and restaurants.
Today a model of the Trojan horse is the best known monument of the town.

View of the Gallipoli peninsula opposite Çanakkale

A plan to seize the Dardanelles was developed by Winston Churchill, First Lord of the Admiralty. It was approved in January 1915 by the British and French cabinets and in February of that same year an Anglo-French task force bombarded the Ottoman forts. It was the beginning of the Gallipoli campaign, named after the long peninsula which constitutes the European side of the Dardanelles. That campaign is regarded by Turkish historians as the very beginning of their country's redemption after the long decline of the Ottoman Empire. The hill opposite Çanakkale is decorated with a gigantic image of a Turkish soldier and with the first words of a poem by Necmettin Halil Onan dedicated to those who fell:
Traveller stop!
The soil you tread
witnessed the end of an era. Fort Anadolu Mecidiye (north of Kale Sultanieh) seen from the Eceabat-Çanakkale ferry. The fort is still a military zone

We had water batteries and forts on both sides of the Hellespont, flying the crimson flag of Turkey, with its white crescent.
Mark Twain - The Pilgrims Abroad - 1869

You may wish to visit the Archaeological Museum of Çanakkale.