- Mistrà (Mystras)
(detail of a 1651 engraving by Marco Boschini)

In 1439 Byzantine Emperor John VIII Palaeologus and his advisers attended the Council of Florence at which they agreed on terms for the reunion of the Catholic and Orthodox churches. It was a desperate attempt by the Emperor to gain western support to counter-balance the Ottoman threat. All the Florentines were highly impressed by the rich costumes of the Emperor and his retinue and a few years later Benozzo Gozzoli painted in Palazzo Medici a Journey of the Magi in which he portrayed John VIII Palaeologus, the Patriarch of Constantinople and another Byzantine prince followed by their retinue (image in the background of this page). The silk dress of the Emperor was most likely designed and manufactured in Mistrà, at the time a very flourishing town in Laconia, the region of Peloponnese (aka Morea) which once was ruled by the Spartans. 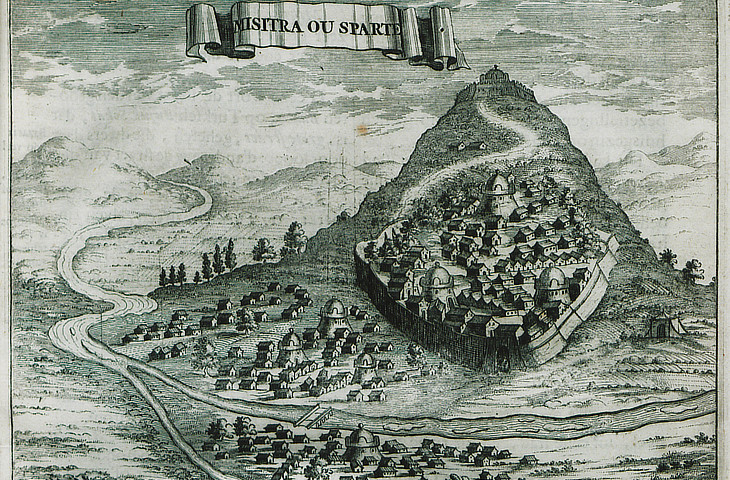 A view of Mistrà in 1688 from a book by Olfert Dapper, a Dutch physician and writer

Mystras, the "wonder of the Morea", was built as an amphitheatre around the fortress erected in 1249 by the prince of Achaia, William of Villehardouin. Reconquered by the Byzantines, then occupied by the Turks and the Venetians, the city was abandoned in 1832, leaving only the breathtaking medieval ruins, standing in a beautiful landscape. (..) The city was a major piece on the political chessboard of the time and was developed and beautified as befitted its role as a centre of power and culture. The city's complex history is clearly evident in its fortifications, palaces, churches, convents, houses, streets and public squares.
From the UNESCO synthesis of the universal value of Mystras which in 1989 was added to the World Heritage List. 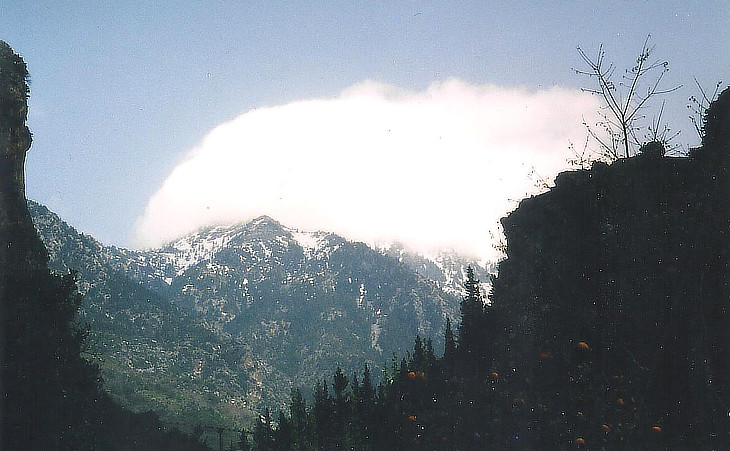 March 17, 1805. We proceed over the same kind of mountains till 5, when, (..) the magnificent range of Taygetum presents itself to view, and Mistra is seen on a steep height, under the middle of it. (..) We continue descending the long slope of the Malevo range, enjoying occasionally a view of Mistra, of Mount Taygetum, and of the continuation of that range to the northward of Mistra. (..) A lofty summit of Taygetum, immediately behind the castle, three or four miles distant, is clothed with a forest of firs, and now deeply covered with snow. I cannot learn at Mistra any modern name for it, except the very common one of Ai Elia, or Saint Elias, who, like Apollo of old, seems to delight in the protection of lofty summits.
William Martin Leake - Travels in the Morea - 1830
(ca 1801) Taygetes, whose summits are covered with snow, rising in a pyramid to the south, bounds one of the most charming views in the world. (..) Taygetes is the natural bulwark of Laconia on the side of Messenia. (..) Sparta, the capital of this country, flourished under the government of Lycurgus: a government respecting which there is a great diversity of opinions among all writers, ancient as well as modern. We see the Spartans, always jealous and ambitious, render themselves masters of Laconia by violence, and reduce its natural inhabitants to the most abject slavery. To maintain themselves in such a state, we see these victors adopt in common life the manners of a camp, eat together in community, and never lay aside their arms. We see them educating their children in habits of fraud and ferocity, inspiring them with a taste for theft, for rapine, and plunder.
François Charles Hugues Laurent Pouqueville - Travels in the Morea, Albania, and other parts of the Ottoman empire - 1817 edition
According to Plutarch, a Ist century AD historian, newborn Spartan babies unfit to live were left at the foot of the mountain, but this account is not supported by evidence. 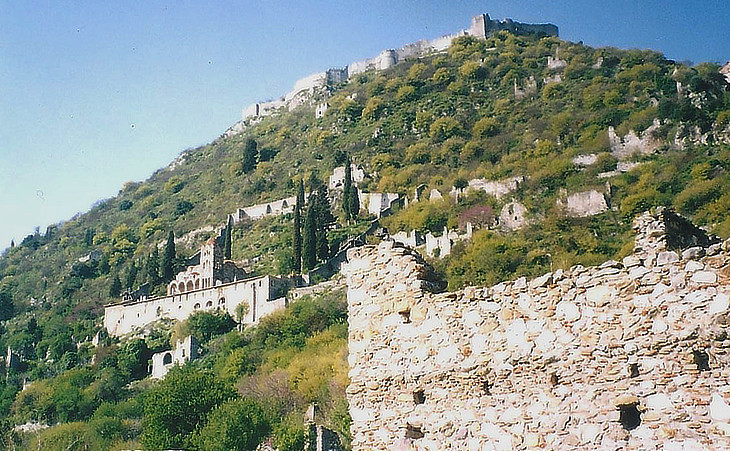 (1805/1806) Mistra presents itself in all its magnificence, so well displayed on the sides of its lofty rock, that every house is visible, rising in gradation one above the other, to the grey towers of the citadel on its summit. (..) The mosques, with the dwellings of the rich Turks, beautifully interspersed with trees, add much by the contrast of their white slender minarets with the dark cypresses, to the picturesque effect. I know of nothing to exceed the first sight of Mistra, though a nearer approach destroys the illusion of magnificence which it has excited.
William Gell - Narrative of a journey in the Morea - 1823
The streets of Mistra, from which I have wandered to indicate some monuments I thought worthy of notice, but of which an accurate idea can only be given by the pencil, - these streets are narrow, dirty, and built upon very uneven ground. The houses, surrounded with cypresses, plane-trees, and tufts of orange-trees, have a pleasing and picturesque appearance to the eye. Pouqueville
The part of the town occupied by the cathedral and bishop's house, is Katokhori: the houses are so much dispersed, that the town occupies a mile and a half along the foot of the hill, though there are not altogether more than 1000 houses, of which about a fourth are Turkish. Katokhori alone, together with another quarter now deserted, called Kastro, on the north-eastern side of the castle above Katokhori, once contained an equal number, but they were destroyed during the insurrection of 1770, or after that event, and their ruins only are now left, occupying a space equal to that of the present inhabited town. Leake
At the time of its largest development in the XVth century Mistrà included the Castle on the top of the hill, an upper town immediately below the castle and a lower town reaching the foot of the hill. In 1770 an insurrection of the Greeks which was supported by Russia caused the invasion of Morea by Muslim Albanians sent by the Sultan. In particular Mistrà was pillaged and many of its Greek inhabitants were killed or forced to flee the town.

Laconia was first a prefecture, then a principality under the Lower Empire, and afterwards became a despotat under those absurd princes who came to fix their court at Mistra. (..) Mistra, which replaced Sparta as the principal town of Laconia, after ages of troubles and anarchy, yielded at last to the powerful genius of the great conqueror of Byzantium (Sultan Mehmet II), and received him into its walls in 1460, three thousand two hundred years from the foundation of Sparta. It is well known that this inexorable tyrant ordered the governor of the castle of Mistra to be sawn in two. Pouqueville
Constantine XI was crowned in 1449 in Mistrà and he was killed while defending the walls of Constantinople in 1453. Because in the last moments of his life he discarded his purple cloak, the Ottomans were not able to identify his body; many devout Greeks believed he had been saved by an angel and for centuries awaited his return.
In 1834 Otto of Bavaria, the first King of Greece, founded the town of Sparta (on the assumed site of the ancient town) and moved the remaining population of Mistrà there. 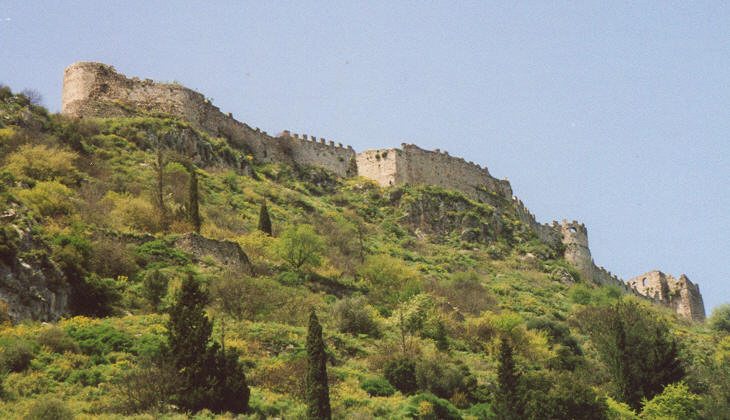 March 18. I ride up to the Castle of Mistra, and pass the rest of the morning at that important geographical station. The castle seems never to have been very formidably fortified, though it is strong by its position and great height; it is about five hundred feet above the level of the plain; the hill on three sides is extremely steep; on the fourth, or southern side, it is perpendicular, and separated from another similar rock by the torrent Pandeleimona, so called from a monastery towards its sources. Leake
The fortress lost its relevance after Mistrà was seized by the Ottomans. The Venetians relied only on fortresses on the coast, e.g. Modon, which could be reached by their fleet and because the Venetians were the only threat to their domination, the Ottomans too paid attention to the coastal fortresses, e.g. Neokastro. 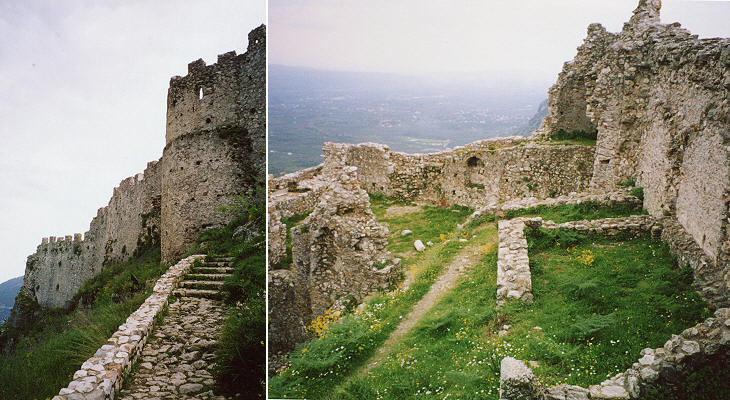 The walls and the interior of the fortress

There are still the remains of some fine cisterns in the castle. The view from thence is of the utmost beauty and interest; the mountains to the north, east, and south, are spread before the spectator from Artemisium, on the confines of Argolis and Arcadia to the island of Cythera inclusive, together with a small part of the Laconic gulf. Leake
Unfortunately the interior of the fortress is almost entirely lost and it is difficult to imagine from these ruins the life of the first French rulers (their fortress at Castel Tornese is in better shape). The Byzantine Despots lived in a palace in the upper town.

Fortifications of the lower town

March 19. I visit some of the chief Greeks, in company with the English agent. There are still some men of property both landed and commercial, and the place is at length recovering from the effects of the Russian insurrection; new buildings are rising in many parts of the town. Leake
On quitting the walled enclosure properly called Mistra, we arrive at Mesochorion. Pouqueville
With the expansion of Mistrà in the XIVth century both the upper town and the lower town were protected by walls and towers (there was only one gate between the two towns).

Mystras, as the centre of Byzantine power, quickly attracted inhabitants and institutions; the bishopric was transferred there from Sparta, with its cathedral, the Metropolis or church of Hagios Demetrios, built after 1264. Many monasteries were founded there, including those of the Brontochion and the monastery of Christos Zoodotes (Christ the Giver of Life). Under the Despots, Mystras reached its zenith with the building of churches, outstanding examples of Late Byzantine church architecture, such as Hagioi Theodoroi (1290-1295), the Hodegetria (c. 1310), the Hagia Sophia (1350-1365), the Peribleptos (3rd quarter of the 14th century), the Evangelistria (late 14th - early 15th century) and the Pantanassa (c. 1430). UNESCO
Mistrà retains several churches and monasteries which make the town one of the most important sites for the study of late Byzantine art. Close links with Constantinople are evident in several aspects of these buildings, many of which were turned into mosques (their minarets were pulled down after the establishment of the Kingdom of Greece).

Thirty years ago this suburb contained three thousand houses; and though this number is much diminished, it still occupies a considerable space: but the houses are scattered about, and mingled with trees and gardens. (..) But we no longer visit this spot to admire the churches of Perileptos and Agia-Paraskevi. They would ill repay the curiosity of the traveller, since they were plundered by the Albanians.
Pouqueville
According to a recent firmahn (decree), the Greeks of Mistra are allowed to repair their churches on condition of paying 300 piastres for each to a mosque at Constantinople. Leake
An explanation for the large number of small churches of Mistrà can be found in the fact that the wealthiest families used them as funerary chapels, e.g. Agioi Georgios. 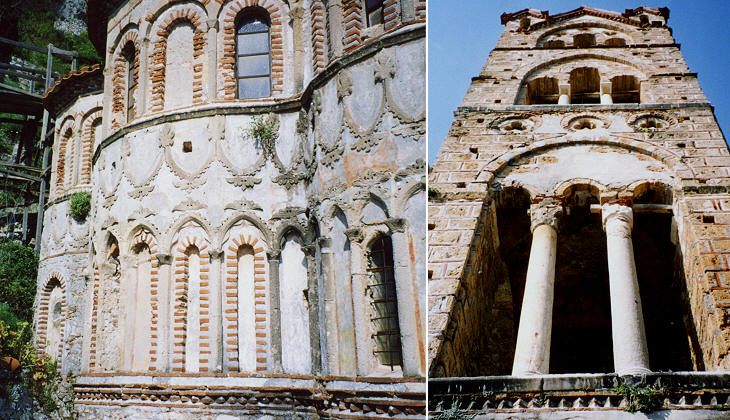 Details of the Monastery of Pantanassa

To the south is the Pandanesi, no less devastated by the horrors of the last war. The nuns, who had a convent there, were massacred by the Albanians; and those who have resumed this institution having remained in a great degree wanderers, the Pandanesi is now only a Greek church. Pouqueville
The most significant remaining Christian monument of Mistrà is the nunnery of Pantanassa. It is one of the last additions to the town as it was completed in 1428 and more than the other churches it shows a mixture of Byzantine and western styles, in particular in its bell tower.

You may refresh your knowledge of the history of Venice in the Levant by reading an abstract from the History of Venice by Thomas Salmon, published in 1754 (the Italian text is accompanied by an English summary) or you may wish to read excerpts (in Italian) from Memorie Istoriografiche del Regno della Morea Riacquistato dall'armi della Sereniss. Repubblica di Venezia printed in Venice in 1692 and related to Mistra.