Towards evening the breeze freshened, and bore us northward with great speed, so that shortly after midnight we landed on the eastern shore of Antiparos, where it is separated from Paros by a narrow channel.
Henry Fanshawe Tozer - The islands of the Aegean Sea. Publ. 1890, but Tozer began his travels in 1874.
Antiparis (opposed to Paris) is located opposite the southern part of Paris: there is only a very narrow passage between the two islands.

Many tourists try to escape the crowded beaches of Paris by taking the ferry which links the two islands: when they land on Antiparis they hardly notice the difference because the harbour looks crowded and cosmopolitan.
Kastro means castle but apparently there is no castle in sight although a cafè at the end of the main street is named in a mixture of Spanish and Italian El (Span.) Castello (Ital.). An inscription in the pavement (you can see it in the image used as background for this page) is another indication of the existence of a castle.

Entrance to the "castle" and the main church

The one village of Antiparos is just one of the usual fortified Kastros of the islands, with the backs of the houses fitting close together, so as to form a circular wall. It has gates which are now never closed, and its streets are filthily dirty; and, as it lies low, in summer time it is a hotbed of fever.
James Theodore Bent - The Cyclades - 1885
After a relatively long walk along a series of adjacent buildings one reaches a low passage which gives access to a square where a large 1645 church is located. This part of the town is called Xopyrgo (outside the tower) and is an addition to the original "castle" which turns out to be a fortified village similar to those at Argentiera and Folegandro.

Gate and structure of the castle

Antiparos may in one sense be said to be a lucky island - it is a place without a history. In classical times it was ignored, in mediaeval times it was deemed of no account; all we can say for certain about it is that, until lately, it was the hotbed of piracy - and its inhabitants are still anything but creditable members of society. Bent
The older part of the castle was built in the XVth century when Antiparos was ruled by Giovanni Loredan and his wife Maria Sommaripa; they both belonged to important Venetian families: the Loredan had a grand palace in Venice and the Sommaripa were the lords of Andro. 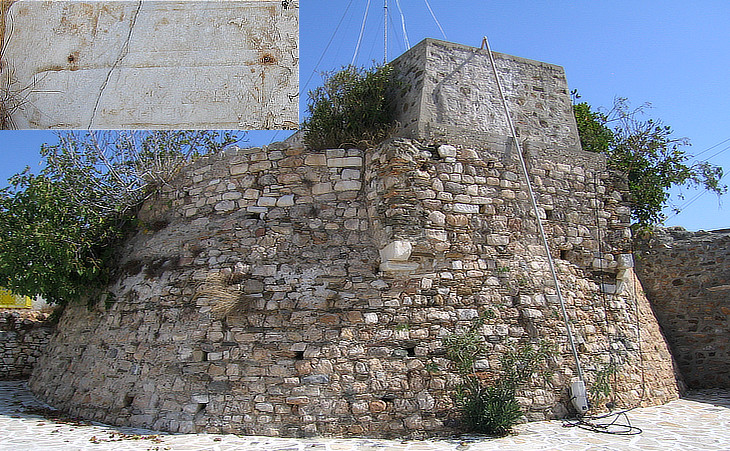 The inhabitants of the island lived in one location which offered some protection, if not from the attack of a proper army, at least from the raids of pirates. The materials employed in the construction of the keep included stones from ancient buildings.

Inside the castle: the keep and the church

The keep at the centre of the village was most likely the residence of the lords of Antiparos: it was damaged by being used as a base for building a water tank.

Details of the houses

All the houses were built on three levels according to a similar pattern: the lower level was most likely used for stables and sheltering farming equipment.

Lintel of the main church and a relief showing the winged lion of St. Mark, symbol of Venice

After sleeping at a village near the coast, we started on foot to explore the Grotto. Tozer
In the XIXth century the main attraction of the island was a vertical cave with a depth of approximately 85 meters. Visitors who carved their names on its stalactites and stalagmites include Lord Byron and the first king of Greece, Otto. During the German occupation, part of the cave was destroyed.