- Negroponte (Chalcis)
(detail of a 1651 engraving by Marco Boschini)

Negropont is called by the Grecians Egripos, as well the City as the Island: which is very probably a corruption of the word Evripus: which the Greeks would pronounce Evripos. (..) But the barbarous name, by which the Italians, and we from them, call it, hath no foundation for it, but the ignorance of the Language. For there is no such thing as a Black Bridge over the Euripus, for them to call it Negropont from it. Perhaps they might hear the Greeks say (..) Ston Egripon; from which sound they might accommodate Negripon, or Negroponte, or the like, to their own Language, as is ordinary for both Francks and Turks to do of the Greek names, as I have often noted.
A journey into Greece by George Wheler, Esq., in company of Dr. Spon of Lyons - 1682 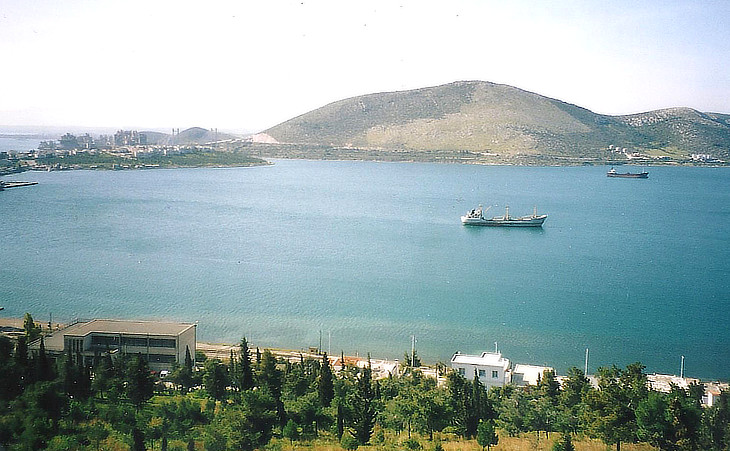 The Strait of Euripus between the mainland and Euboea, south of the town

The City Egripus then is upon or hard by the place where Chalcis stood formerly; that is, on a Peninsula of the Island anciently called Euboea: and is there separated from Boeotia by a narrow streight. (..) We should be extreamly to blame, if we had not endeavour'd to inform our selves, as much as possible, concerning the wonderful Ebbing and Flowing of the Euripus, so justly admired in all Ages, for one of the great wonders of the World. Our stay here was not long enough to observe all the various changings of its Tydes our selves: But I shall give you the best account of it I can, from the Informations we had from the Inhabitants and other ingenious men that have resided long there; and not content my self to tell you only, that it kept its Motion according to the Tydes of the Ocean, the two days I staid there, and observed it. The most exact account of it we had from the Jesuits, and that confirm'd by the Millers, who have Mills on it, and therefore by long experience and observation should know the truth best. They all agreed, that its Tydes were sometimes regular, and sometimes irregular, according to the different times of the Moon. Wheler
The island of Euboea is parallel to the coast of the mainland and approximately at the middle of the channel the distance between the island and the mainland is just of a few yards. The current is very strong and in addition it often changes direction, so that the phenomenon was regarded as a wonder of the world. 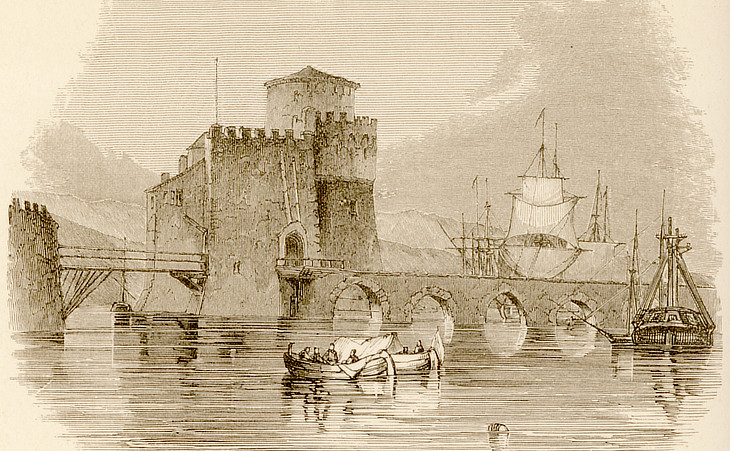 (ca 1807) The Euripus which strictly speaking is no more than the narrowest part of the strait between the foot of Mount Karababà and the western walls of the kastro is divided as to its breadth into two unequal parts by a small square castle, founded on a rock, and having a solid round tower at the north-western angle. A stone bridge, 60 or 70 feet in length, connects the Boetian shore with this castle, the entrance into which is by a drawbridge near the north-eastern angle. Another wooden bridge about 35 feet long, which may be raised at both ends for the purpose of admitting the passage of vessels, communicates from the small castle to the gate of the kastro. (..) It is believed by the people of Egripo, that the small castle on the rock in the Euripus did not exist in the time of the Venetians, but was built by the Turks soon after the conquest. Coronelli, however, whose work was published in 1686, the year before Athens was taken, and Negropont invested by the Venetians, states that the entrance from Boeotia first crossed a bridge of stone of five arches, about 30 paces long, that it then passed at the foot of a tower of Venetian structure, over the door of which the lion of St. Mark still remained (though the Turks had then possessed the place 200 years), and entered the town over a wooden drawbridge. These remarks seem sufficiently to explain that the round tower is Venetian, and the remaining part of the work Turkish, of which indeed there is every appearance.
William Martin Leake - Travels in northern Greece - 1835 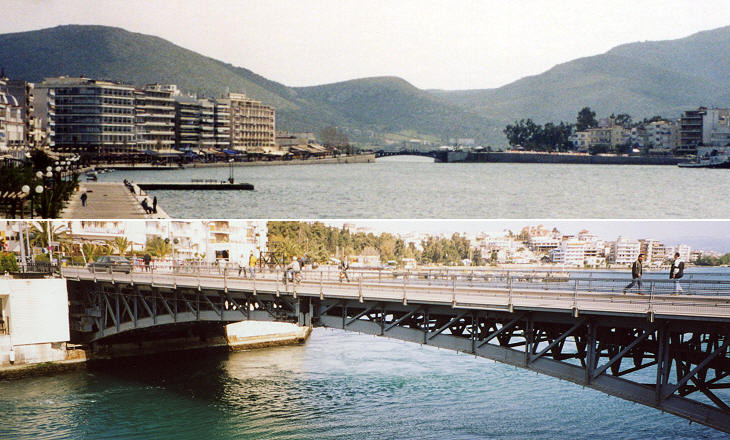 The Strait of Euripus today (above) and the new bridge (below)

Today a modern movable bridge has replaced the fortified bridge which controlled the access to the town.
Chalcis is a very modern town with a sea promenade full of cafès and restaurants. Only the quarter of Kastro (castle) retains some memories of the past. 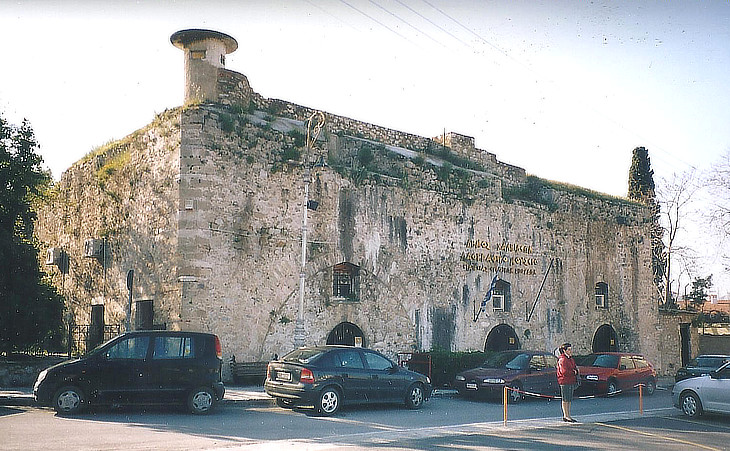 Diverse times the Turks threatned to take it, but in regard of the strength of its situation they desisted, till the year 1469. Mahomet the Great sent a Fleet of above 300 Ships, Gallys, and smaller Vessels; he in Person appeared at the Head of above a hundred thousand men, besieging the City by Sea and Land above a month, in which time above twenty assaults were given. The Garrison were above twenty four thousand, who Valiantly resisted the Enemy, despising the offers made them to surrender the place. The City was taken by General Storm; very few of the Besieged were spared alive. A Noble Venetian, of the Family of Erizzo, with a small Party of his, retir'd into the Island Castle, but could not resist so great a Power: And the Grand Signior having promised to spare his life, surrender'd himself. He was afterwards sawn asunder by the Grand Signiors command, and his Daughter cut in pieces for refusing to yield to the lustful will of that Tyrant. The Turks lost above forty thousand men in this Siege.
Bernard Randolph, b. 1643. The present state of the islands in the archipelago.
The loss of Negroponte in 1470 was a major setback for Venice. After the conquest of Constantinople by the Ottomans in 1453, Venice thought it might be able to control the new emerging power by its naval strength, but Sultan Mehmed II attacked Negroponte with such a large fleet that "the sea looked like a forest" according to a Venetian commander. 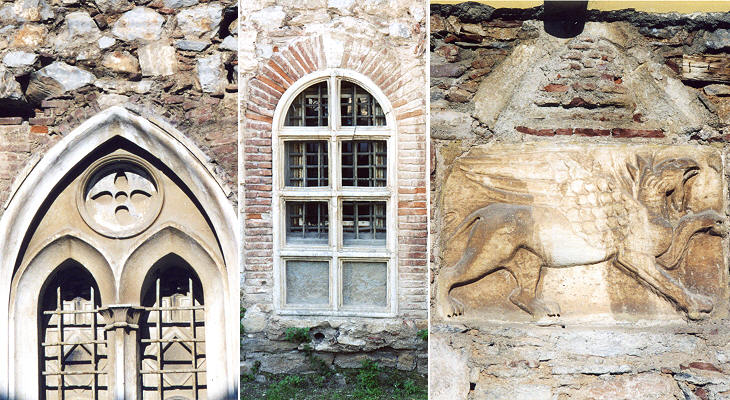 Walking in the old quarter of Kastro

The only remains of ancient Chalcis I can find are some fragments of white marble in the walls of the mosques and houses. (..) Many of the better houses are of Venetian construction, and there is a church with a high pointed roof, square tower, and Gothic windows, which was probably built by the same people, as they were in almost constant possession of this place for the three centuries preceding its capture by Mahomet II. in 1470. Leake 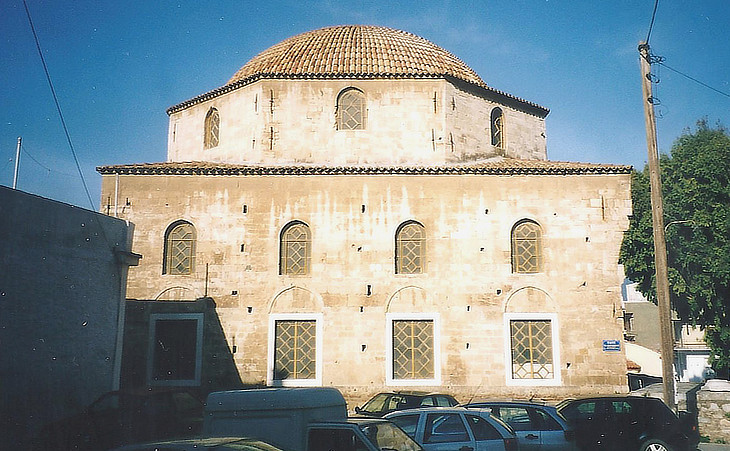 The Walls of the Town are not above two Miles about: But there are more Buildings and People in the Suburbs of the Christians beyond, than in the City, where only Turks and Jews inhabit. The Turks have two Mosques within, and two without: where the Christians have also their Churches. (..) There are six or seven Families of the Francks among them; and a Seminary of Jesuits: who pretend to be there only to teach their Children; but withal, to do as much service to the Romanists as they can. This is the chief residence of the Captain Basha, or General of the Turkish Fleet, who is Governour both of this City and Island, and the Adjacent parts of Greece. (..) A Fleet of Gallies still lie here, to be ready upon all occasions to go out against the Pyrates, and those of Malta. Wheler
The City is now well fortified with new fortifications, and the Ditches made deeper and wider than they formerly were. (..) The Jesuites have also a small Chappel in their house; Their care is to look after the Slaves, when the Gallys are there. Randolph
Chalcis retained its walls and ditches until the beginning of the XXth century when they were pulled down or filled to allow the expansion of the town. 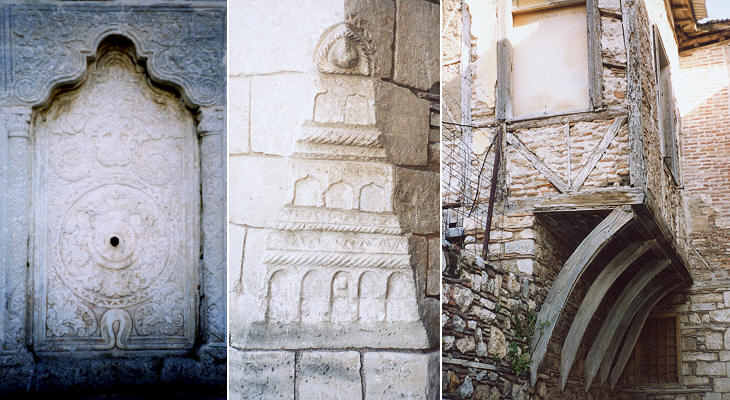 About a furlong from the Castle, is the New Town very well built (after the Turkish manner) with a large Bazare or Market-place. Here are two Mosques, and several Greek Churches. (..) They reckon to be upon the whole Island not above 60000 soules, of which not above 10000 Turks, who most live under the command of the Castles at Negro Ponte, and Castel Rosso. Randolph
The Christians in the town of Egripo do not form above a third of the inhabitants. Leake 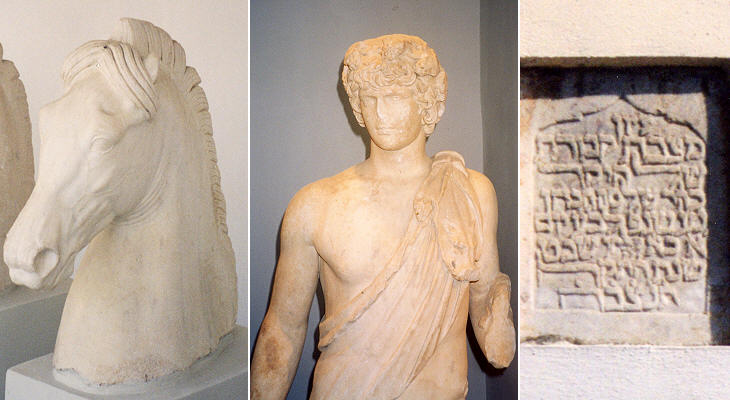 Archaeological Museum of Chalcis: (left) ancient head of a horse; (centre) statue of Antinous (see that at Delphi); (right) a Jewish inscription outside the museum

None but Turks and Jews live within the Castle. Randolph
The cultural heritage of the town includes also Greek and Roman statues and evidence of a Jewish community. The image used as a background for this page is based on a Greek relief depicting the killing of a ram. 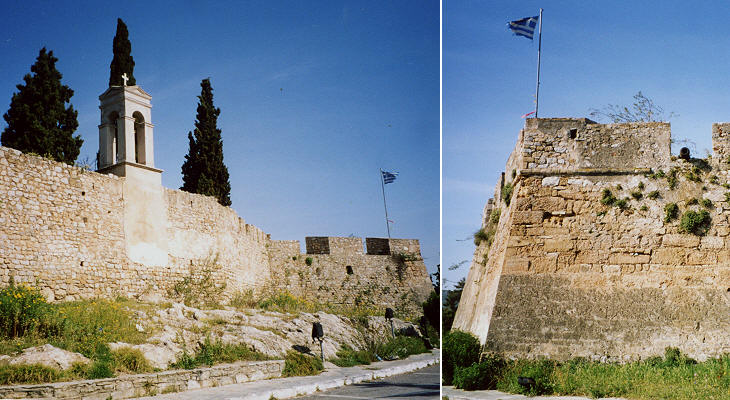 The fortress of Carà Babà - exterior

In addition to the walls and the castle on the bridge, Negroponte was protected by a fortress built on a hill on the mainland opposite the town. The fortress was greatly strengthened by the Ottomans and it played a major role in the defeat of the Venetian attempts to seize the town in 1688. During a major assault a strong current pushed the Venetian fleet close to the fortress and the Ottoman guns hit many ships. 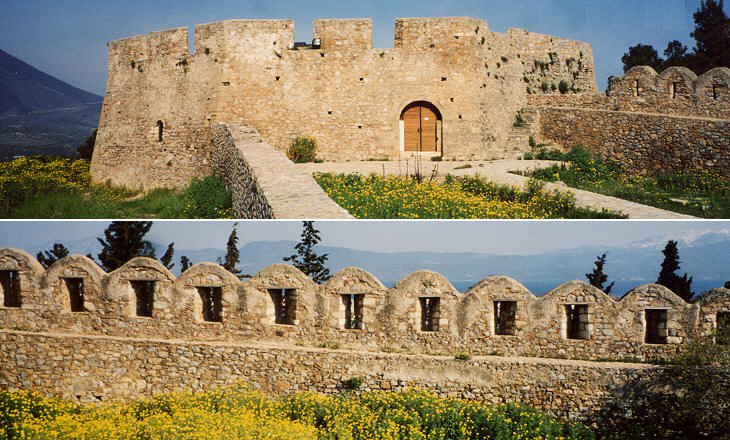 Some parts of the fortress have a Venetian appearance, while some details are typical of Ottoman fortresses. A citadel provided a last opportunity for defence. Towers and a castle near Vasilika

This bay near Egripo communicates by a narrow opening with a long winding strait which extends about four miles to a second narrow opening, where stands a tower upon a low point of the Euboean coast, in the plain of Vasiliko. No vessels except boats can approach Egripo on the southern side, nearer than the tower. Leake
In addition to the fortifications of Negroponte the security of the island was based on a series of watch towers and small castles near the coast. The fortress of Castelrosso (or Caristo) controlled the southern entrance of the Strait of Euripus and that of Oreo the northern one.