- Santa Maura (Lefkada)
(detail of a 1651 engraving by Marco Boschini)

The Castle of Saint Mauro is not above a dozen miles from the Gulph of Ambracia, now called the Gulph de L'arta; near which was the renowned City, Actium, famous for the Battle of Augustus Caesar against Mark-Antony; but at present there is no more talk of this City.
A journey into Greece by George Wheler, Esq., in company of Dr. Spon of Lyons - 1682 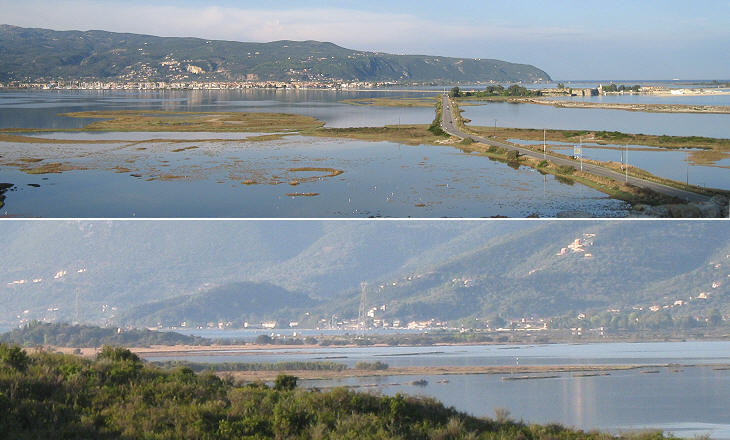 The usual gulf wind from Prevyza, carries us to the northern promontory of Lefkadha at nine in the forenoon of Sept. 11 (1806). At the northern cape the coast makes a sudden curve to the eastward, and a sandy beach begins, from which, midway towards Amaxikhi, branches the low promontory of Plaka. This spit of sand makes an angle to the north-west, and then retires in the opposite direction until at a short distance from the coast it assumes a direction parallel to that shore, forming the northern entrance of the lagoons, which separate the island of Leucas from the mainland.
William Martin Leake - Travels in northern Greece - 1835
Santa Maura may rather be called a peninsula than an island, being, in fact, connected with the continent by the sand-bank, which begins near the gulf of Arto, and extends for an hour and a half as far as the town of Santa Maura; about which the water, in its deepest parts, is but six feet.
Christian Muller - Journey through Greece and the Ionian Islands: in June, July, and August, 1821
The northern tip of the island is situated very close to the mainland to which it is linked by a long strip of sand which forms a large lagoon. 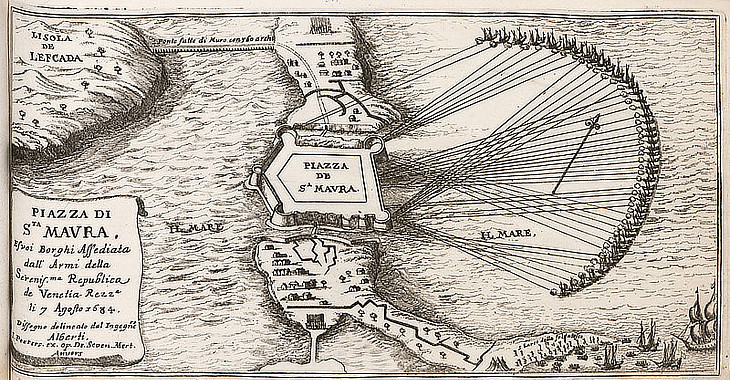 Engraving showing the Venetian siege of Santa Maura in 1684

The Fortress is good, and hath some round Bastions, situated upon a very low ground. But that, which renders it considerable is, that it neither can be approached to by Land, nor Sea, unless in those Monoxylo's, or little Barques, which draw not above a foot of water. It is separated by a ditch of thirty, or forty foot wide, from two little Islands, which are as the Suburbs to the Fortress, and are inhabited by Turks and Greeks. Their Houses are very low, and built of wood: But to make amends, they themselves go very well cloathed, and are great Pirats in those Seas. (..) We left our little Boat ashore, and went to Saint Mauro on an Aqueduct a mile long, which serveth as a Bridge for those that will go thither on foot, though it be not above a yard broad, and without any hold; which would make the stoutest man tremble in passing it, especially if he meet any other thereon. For it is as much as two can do to pass by one another. There is above Five or six thousand Inhabitants in the Cittadel and Suburbs. (..) There are about Thirty Villages in the Island, inhabited by poor Greeks, that manure the Land, and catch Fish; Being under the Jurisdiction of a Bishop, whose Revenues apparently are but mean. The Isle is fruitful enough in Corn, Oranges, Limons, Almonds, and Pasture for their Cattel; and is about Thirty, or Forty miles in compass. Wheler
Wheler visited the island in 1675 when it was part of the Ottoman Empire. His description of the fortress and of its suburbs matches the 1684 engraving, including the narrow bridge/aqueduct which linked the spit of sand with the island. 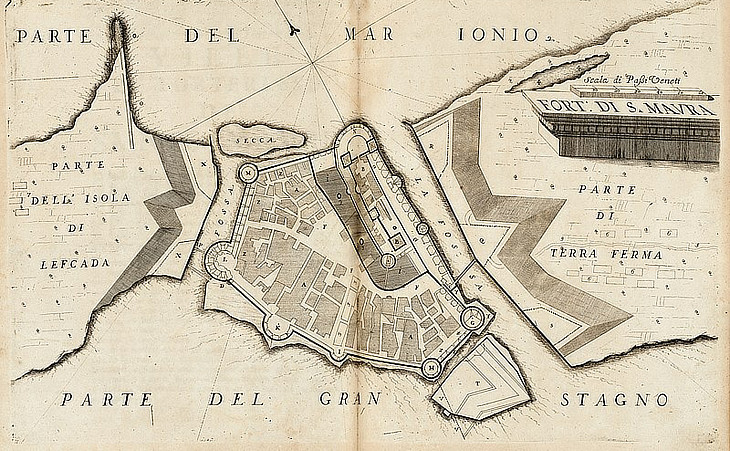 1687 Map of the fortress of Santa Maura (stagno=marsh/lagoon)

There is considerable confusion in common discourse as to the name of Santa Maura, which is given occasionally to the island, the town, or the fortress, but properly Agia Mavra, is the fortress, having received that name from a small church which stood on the site. (..) Formerly the fortress was the seat of government, and there were houses in it for the proveditori ordinario and straordinario. Leake
The fortress, built in the thirteenth century, by a prince of the family Tocchi, was almost entirely demolished in 1715; but afterwards restored by the Venetians, and lately improved by the English. Its situation is on the neck of land to the north of Santa Maura, near the lagoons or shallows which separate the island from the continent; it is almost entirely surrounded by water, and difficult of access. Muller
A medieval fortress was built on the strip of sand to protect a canal which allowed ships to enter the lagoon. The fortress was modified by the Ottomans and later on by the Venetians; the latter in particular provided it with a large number of cannon which were capable of greatly damaging a hostile fleet. 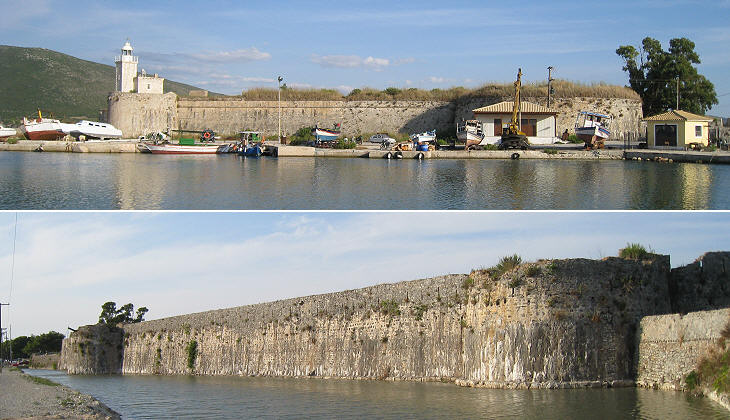 Fortress of Santa Maura: (above) western side; (below) southern side

The fortress of Agia Maura stands exactly at the re-entering angle of the promontory, where the strait is narrowest, and covers the whole breadth of the Plaka. (..) Cross the lagoon in company with Count Orio to the fortress, in a small flat-bottomed boat which is punted, and sails back without any danger under the lee of the aqueduct, though there is a strong south-wester without. The aqueduct is so narrow, that when the wind is very strong it sometimes happens that careless or drunken men, are blown over into the water and smothered in mud. Leake
Today a modern road links the fortress with the mainland and with the town which the Venetians built on the inner side of the lagoon. 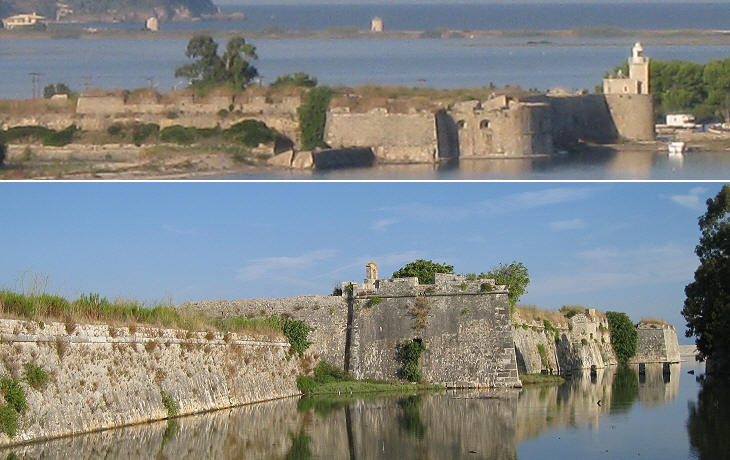 Fortress of Santa Maura: (above) northern side; (below) eastern side

The profile is low, and the wall is very weak, especially towards the lagoon. (..) It is now occupied by a Russian garrison. (..) The Russians in garrison, who have just received a year's arrear of pay and clothing, are commanded by a rough Russian colonel, who has learnt a few words of Italian at Naples and in these islands, and says that he should prefer the most miserable village in Russia to his present solitary and disagreeable station. Leake
The walls of the fortress are low, because the Venetians did not want them to be an easy target for the enemy's guns. They strengthened in a traditional way only the eastern side of the fortress which faced the mainland and controlled the passage between the lagoon and the open sea. 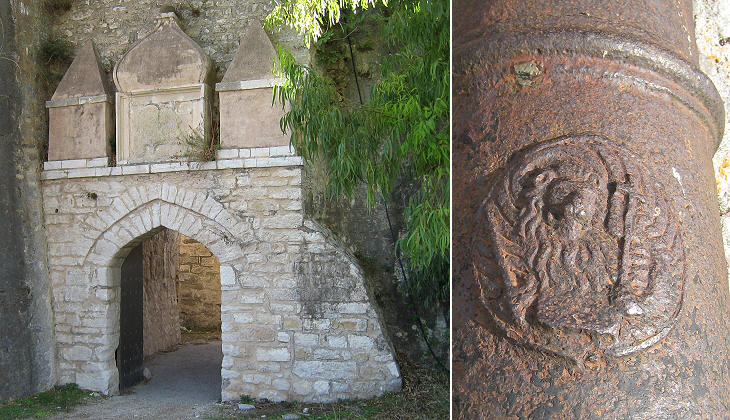 The main entrance to the fortress shows elements of an Ottoman design; the Venetians placed a winged lion above the gate, but now it is barely visible (the image used as background for this page shows a modern winged lion placed by Greek authorities on the external walls of the fortress). A winged lion can still be seen on a cannon. 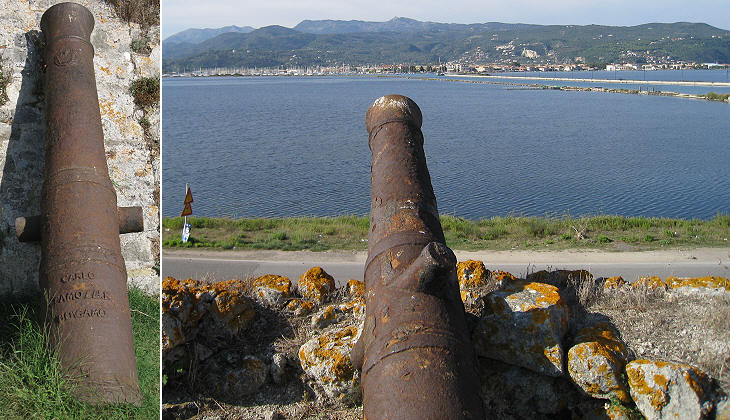 (left) Camozzi cannon; (right) a cannon on the southern wall of the fortress

Inside the fortress there is a cannon upon which the name of the manufacturer can still be read (Carlo Camozzi from Bergamo, a town near Milan which was a Venetian possession). The foundry was located in the village of Clanezzo. You may wish to see some elaborately decorated Venetian cannon at Nauplia. 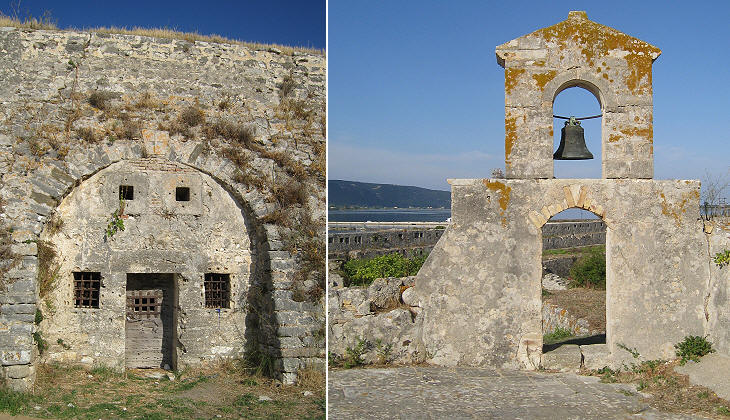 (left) Entrance to a former chapel; (right) bell tower of Agia Mavra, the only remaining consecrated chapel inside the fortress

The population of the island increased after the 1718 Peace of Passarowitz because Venice relocated people from some of its former possessions in the Aegean Sea, e.g. Suda to Santa Maura.
In 1888 most of the buildings inside the fortress were destroyed by a fire caused by the explosion of a gunpowder magazine. 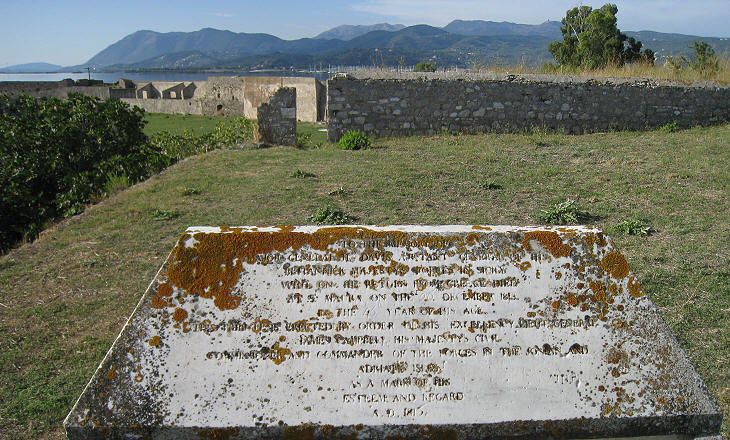 Grave of Major General Henry Davis
TO THE MEMORY OF
MAJOR GENERAL H(ENRY) DAVIS, A(D)JUTANT GENERAL OF HIS
BRITANNIC MAJESTYS FORCES IN SICILY
WHO ON HIS RETURN FROM GREECE DIED
AT S(AN)TA MAURA ON THE 26TH DECEMBER 1813
IN THE 45TH YEAR OF HIS AGE.
THIS TRIBUTE IS ERECTED BY ORDER OF HIS EXCELLENCY LIEUT. GENERAL
JAMES CAMPBELL HIS MAJESTYS CIVIL
COMMISSIONER AND COMMANDER OF THE FORCES IN THE JONIAN
AND ADRIATIC ISLES
AS A MARK OF HIS
ESTEEM AND REGARD
A(NNO) D(OMINI) 1815.

During my stay in Zante, it was visited by General Davies, adjutant general of the British forces in the Mediterranean, who had left his residence in Sicily in search of health. As he had projected a tour in Greece, on which I was also bent, we had agreed to travel together, and he consented to follow the route which I had chalked out. But my strength not being sufficiently re-established to admit of my setting out when he was ready, he crossed alone to the Morea in the middle of November. On my return to Zante in February, I was shocked to hear that he had fallen a victim to the fatigues and privations of the journey, and died in Santa Maura.
William Turner - Journal of a Tour in the Levant - 1820 Entrance to the older part of the town

The modern capital of Leucas, is named Amaxikhi; (..) its houses are very unlike those of Corfu, being built chiefly of wood on a substruction of stone or brick, with galleries supported by wooden pillars. The greater part of them are of one story only, which, as well as the wooden construction, is said to have been adopted in consequence of the frequency of earthquakes (a major one occurred in 1743). Some of the larger houses are fitted up with tapestry in the Venetian taste. The town is composed of a single street, from which branch some narrow lanes of small wooden tenements. Leake
Santa Maura contains about 6,500 inhabitants, almost all Greeks. The town lies on the north-east side of the island. It has been the capital of the island ever since the fortress was abandoned by government. But it is still small and insignificant, ill-built and dirty. (..) The town contains but one principal street, which was only paved in the latter times of the Venetian government. (..) Owing to the earthquakes the houses are but one story high, with the exception of a few, and among these, the houses built by the English have two stories. Many of the older ones are surrounded by galleries, which are covered with canvass, and are very pleasant during the heat of the summer. The town has fourteen Greek churches. Muller
Lefkada (the modern name of Amaxikhi) still retains a Venetian flavour, similar to the other historical towns of the Ionian islands. 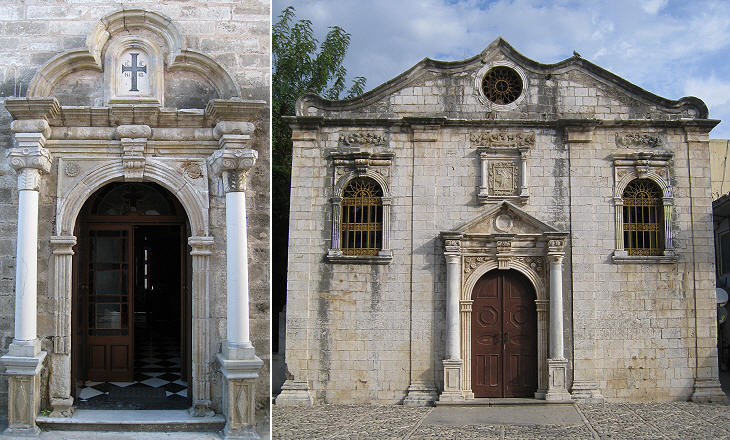 During the XVIIIth century the wealthiest family of Santa Maura built a series of small churches/chapels, the design of which recalls that of similar Venetian buildings.

Move to page two: other defences of the lagoon and Ottoman fortifications