Archaeological Museum of Florence: pottery from Syros (IIIrd millennium BC)

No one ever heard of Syra in classical times, except as a refuge for sailors. It was inhabited, it is true, and from time to time produces archaeological treasures, but it never had the name that ancient writers give to Andros, Naxos, or Melos. (..) The first pages of the history of Syra begin in mediaeval times, when it was chosen as a centre for Roman Catholic missions in the East Under the Dukes of Naxos rule in the archipelago.
James Theodore Bent - The Cyclades - 1885

Friday, Oct. 30. 1835 - After a stormy and tempestuous night we reached Syra. Situated in the centre of the Archipelago, half-way between Europe and Asia, Syra became the resort of trade and commerce during the troubled period of the war. (..) Before there existed only the old town, picturesquely situated on a steep and conical hill nearly two miles from the shore. It was entirely inhabited by Roman Catholics.
William Hamilton - Researches in Asia Minor, Pontus and Armenia - 1842
The flourishing commercial centre on the island of Syra is due to the spontaneous outburst of mercantile activity incident on the recovery of freedom. Thus in many ways Hermoupolis, on Syra, is one of the most interesting towns of the Levant. (..) The great massacre of Christians in Chios and Psara drove from their homes some of the bravest and most commerce-loving of the Greek-speaking world. (..) All that is certain is, that the refugees (..) took up their abode on Syra, under the protection of the banner of France. (..) Houses, one above another like the steps of a staircase, completely cover two hills and surround the bay in the form of an amphitheatre. One hill is crowned by the mediaeval town and its Latin church, the other by the modern Greek town and a Greek church. The background is formed by the rocky bleak mountains of the island. Bent
Siro is a small island which became important in the early XIXth century when refugees from Chios founded Ermoupolis which soon became the main port, not only of the Cyclades, but of the whole newly established Kingdom of Greece. Two hills, each with a large church on top, constitute the most remarkable landscape feature of Siro and they provide a clue to its history of the island: Ano Syros (Upper Syros) on a high hill rather distant from the harbour is the old Venetian town while the church with a blue dome on the other hill (Vrondado) is the Orthodox Cathedral of Ermoupolis.

"Syra" wrote Tournefort (a French botanist) in 1699, "is the most Catholic island of the archipelago" and singularly enough it is to Roman Catholicism that this spot owes its existence as a commercial centre. (..) Syra, doubtless owing to its good harbour and central position, recommended itself to the notice of the Capuchins, and on the top of the conical hill which is still covered by the old town they built a convent and a church. They were followed by the priests, and from this centre they sent out missions to all the neighbouring islands with such success that under the Turks, who treated the islanders always with consideration, there were in the Cyclades almost as many of the Western as of the Eastern Church. Naxos, Santorin, Tenos, Andros were almost subservient to the Papal See. Bent
Ano Syros is now part of Ermoupolis, but it still retains most of the appearance one figures out from old engravings (one of which can be seen in the image used as background for this page).

Gates and former residence of the lords of Siro

One afternoon I strolled up the hill, to inspect the town of "Upper Syra" as it is now called, where the mediaeval Roman Catholic settlement still exists; here everything is old world, and the inhabitants seem utterly unconcerned about the busy life in the lower town. The houses are like steps, one above the other; and the steep narrow streets (..) lead up spiral fashion to the convent and church of St. George, which crowns the hill. (..) Between the Eastern and Western Church there is no kindly feeling. Bent
Notwithstanding some modern modifications the top of the hill where the feudal lords of Siro had their residence can still be reached through very few points of access: the narrow street leading to the very top of Ano Syros has been most appropriately named after Thermopylae where in 480 BC the Greeks held the Persians off.

When corsairs and pirates disturbed them, the holy fathers of Syra made bitter complaints to the Roman Catholic powers in the West, and the end of it all was that Louis XIII. of France took Syra under his especial protection. From the convent on the hill the French flag was hung, and by this means the basis for the fortunes of Syra centuries later was laid. From that time until the present day the Roman Catholic bishops of Syra have been elected by the Church of Rome, and from this rock they have made a desperate attempt to convert the Eastern world to their way of thinking. Bent
Siro was called the Pope's island because its inhabitants during the Venetian rule were almost entirely Catholic and they remained so also during the Ottoman domination: Jesuits, Capuchins and many other orders had their monasteries in Ano Syros: their churches were built following Italian patterns.

In the Catholic Cathedral: an inscription celebrating a jubilee year, an Italian style Madonna and a portrait of Giovanni Battista Russin, bishop of Siro and Milo between 1800 and 1824

There is no other town or village upon the island excepting this, which so singularly covers the sugar-loaf hill above the quay. (..) There is not a Turk to be found upon the island: its inhabitants are all Greeks; and they profess the Catholic religion.
Edward Daniel Clarke - Travels in various countries of Europe, Asia and Africa in 1799-1804
Since the war of independence Roman Catholicism has been unpopular, and must soon disappear under the present order of things. Bent
Siro is still a diocese (with Milo) and approximately 20% of the population of the whole island is Catholic.

The rear side of Ano Syros and a windmill

Our friend Tournefort tells us of the prosperity of Syra even in his time, when only a few families lived in a cluster on the conical hill around the convent. He says he could not rest at night for the noise of the hand-mills for corn, or by day for the noise of the wheels which they used to thread cotton with; but it was refreshing, he adds, to see the French flag flying and to hear in churches, both Greek and Latin, this chant sung, "Domine salvum fac regem" to which they added "nostrum Ludovicum". Bent
While the side of the hill towards the sea has a workable slope and it was entirely built upon, the rear side of Ano Syros was too precipitous and was left in its natural state.

In the streets of Ano Syros

The refugees who founded the new town dedicated it to Hermes, the Olympian god who was regarded as patron of commerce. 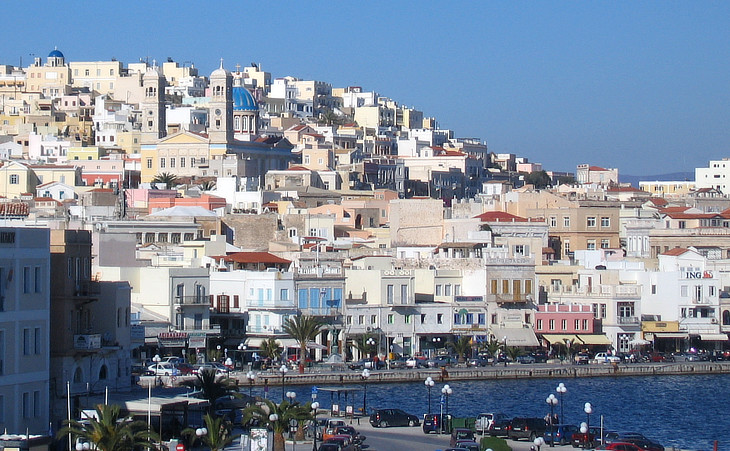 The waterfront of Ermoupolis

It was a brilliant November morning when I reached Syra, and everything was life and bustle around the egg-shaped harbour; all the boats were discharging cargoes, just now having run in with a favourable breeze. (..) The colouring of Syra harbour is especially pretty. Greek sailors love colour; their boats, their sails, and their dress are gaudy. The quay, too, was gay with small hucksters' shops. (..) Far along the quay was the fish market, with strange sights for unaccustomed eyes. Advent was soon to begin - that is, the month's fast before Christmas - so there was any amount of octopodia in the market ready to be dried and stewed for this period. (..) In short, Syra is the modern capital of the Cyclades, whereas in the middle ages Naxos was the seat of government and the residence of the Duke. Bent
The development of Piraeus led to a change of the trading routes and Ermoupolis lost its importance. It is still the administrative capital of the Cyclades and it has ferries linking it with the other islands.

Ermoupolis: (left) the street leading to the Town Hall; (centre/right) details of buildings in Vaporia

Before Greece was free, the town of Hermoupolis began to grow on the cliffs of Syra, holding, like Noah's ark, those that were saved from the cruelty of the Turks. (..) The town has adopted the Western style, and for all the world looks like a town of France or Italy. (..) An excellent street, the street of Hermes, branches away from the quay, and leads into a vast square, where in the evenings the inhabitants promenade to listen to the band. (..) Beyond it is the west end of Syra, where stately mansions are built on the top of a cliff, overlooking the sea. Bent
Ermoupolis was such a success story that the town was a candidate to becoming the capital of Greece: the shipowners who lived in Ermoupolis built their mansions on a cliff overlooking the sea and the area was named Vaporia (steamers). 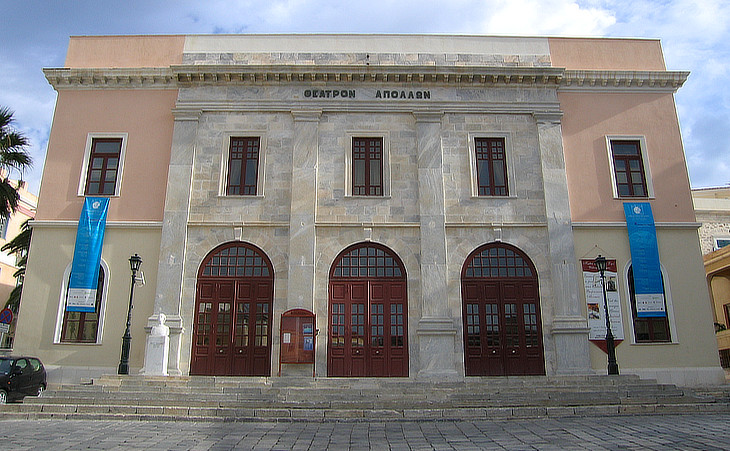 One side of this square is to be taken up by a large Hotel de Ville; but this edifice progresses only slowly; the town authorities are careful, and only do a little now and then to it, when they have a balance in hand. Steep tortuous streets lead up one of the hills which is covered by the new town; everything is white and clean, a great contrast to a town of corresponding size in France or Italy; the drainage is excellent, and not a smell affronts the nostrils. (..) We came across the theatre of Apollo, than which no better theatre exists in modern Greece. Even Athens cannot boast of such. Bent