- Asso (and Fiscardo)
(detail of a 1651 engraving by Marco Boschini)

In the early XVIth century the Ottoman Empire extended its influence over today's Algeria and Tunisia by supporting the local Muslim leaders in their fight against Spain. Khayr al-Din (aka Hayruddin) (known in Europe as Barbarossa, because of his red beard) was the ruler of Algiers and he led several raids on the coasts of Spain and Italy. The Ionian Islands were a target for these raids even during the periods of peace between the Ottoman Empire and Venice. The villages of the northern part of Cefalonia were far from the main fortress and in 1586 their inhabitants appealed to the Venetian Senate for a better defence. 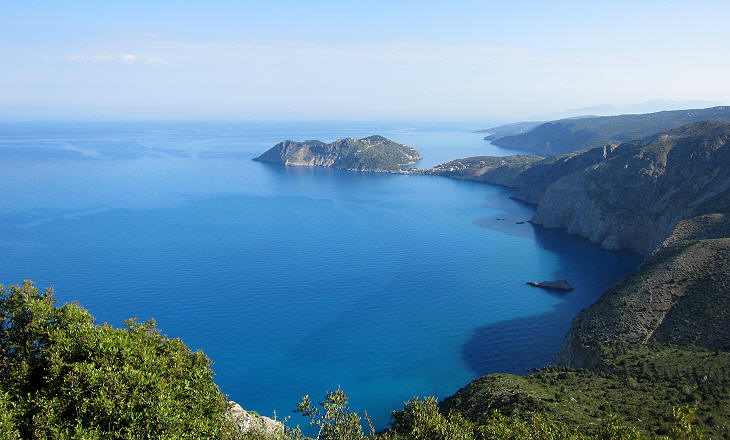 September 1809. The position of Asso, on a peninsula commanding two harbours, concurs with the evidence of a piece of Hellenic wall in the modern castle, to show that here stood a fortress named Assus.
William Martin Leake - Travels in northern Greece - 1835.
The Senate decided to build a brand new fortress on an islet linked to the north-western coast of the island by a tiny strip of land; the location was excellent from a military viewpoint, however it was rather remote from the villages it was meant to protect. The site had been fortified in antiquity. 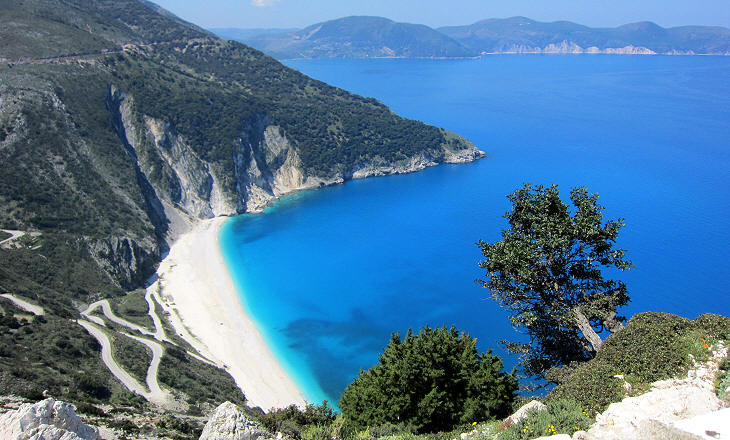 The modern road along the western coast of the island allows spectacular views of the sea and of many coves. Myrtos Beach, together with a view of the sea from a church of Oia (Santorini), appears on most posters of the Greek Tourist Board. As a matter of fact the beach is made up of very small white pebbles, rather than of sand and swimming in its blue waters can be pretty dangerous because of undercurrents. 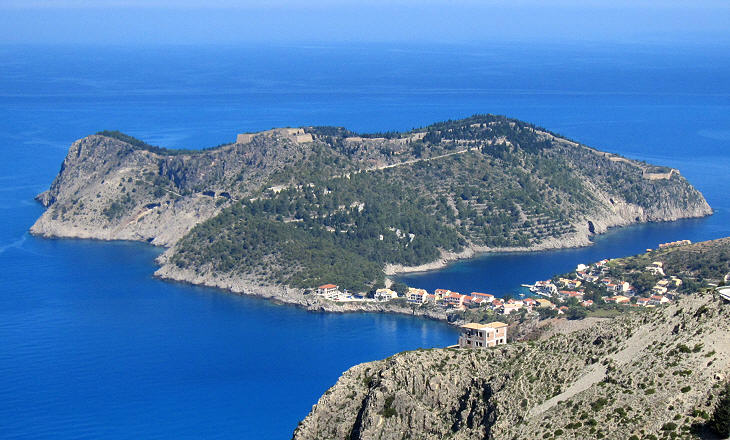 The Venetians built a very large fortress with the intent of attracting a sizeable population, but this objective was not achieved because the cove where ships were expected to moor was too small and the access to it was made dangerous by big boulders which had fallen from the cliffs into the sea. 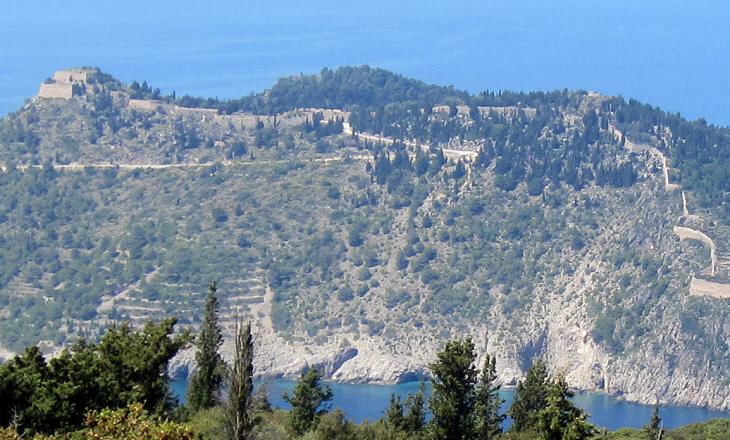 Venetian military architects, e.g. Michele Sammicheli at Candia, developed elaborate patterns for optimizing the design of fortresses, but at Asso these patterns could not be applied because of the nature of the ground, so the walls were built on the edge of the cliffs, rather than according to a geometrical model known as star fort. 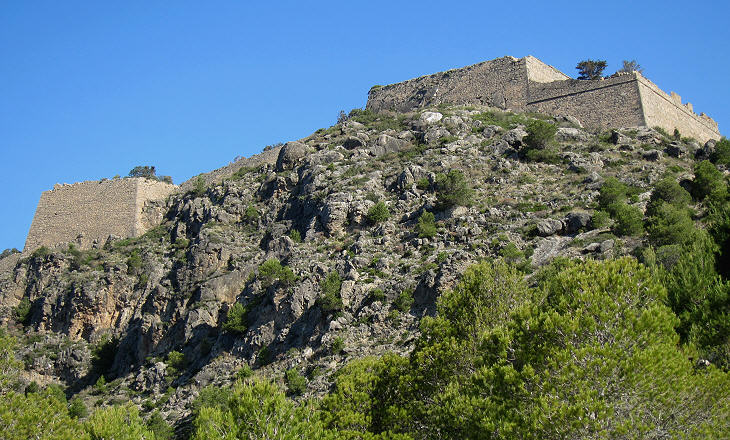 The southern bastion is actually a small fortress where the Venetians could retreat for a last defence in case the enemy managed to penetrate inside the long curtain of walls. The defenders could hope to receive help because Asso could be easily reached by the Venetian fleet which was stationed at Corfu. 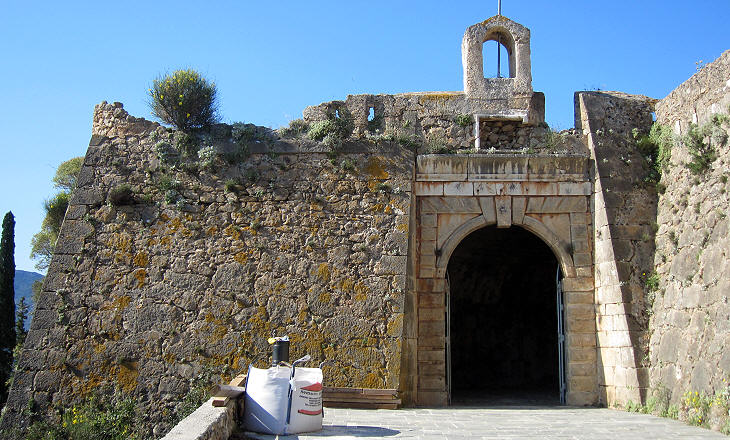 Entrance to the fortress

Cefalonia is located in a highly seismic area and the fortress of Asso has been struck by several earthquakes including the 1953 Great Ionian Earthquake. Records indicate that in 1658 many buildings inside the fortress collapsed because of an earthquake, but overall the external walls seem to have withstood that and other catastrophes (and a long period of abandonment too). 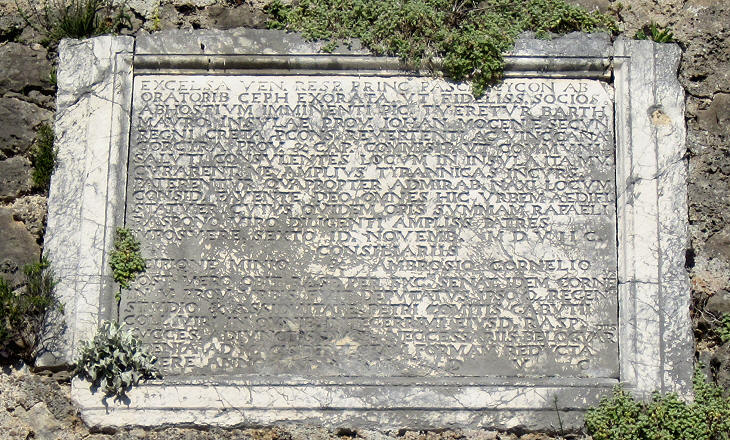 Long inscription celebrating the completion of the fortress in 1595

A very long inscription near the main gate provides details on the history of the fortress and makes clear reference to corsair raids: NE AMPLIUS TYRANNICAS INCURS(iones) PATERENTUR : so that (the inhabitants) would not suffer because of the tyrannical raids any longer. The inscription sheds light on the decisional process which led to the construction and completion of the fortress by mentioning the various officers who were involved in them. 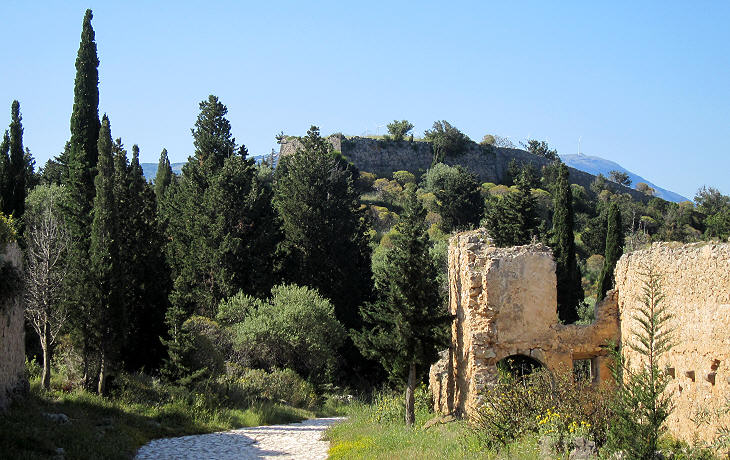 Ruins of buildings inside the fortress

The old buildings inside the fortress are falling apart and it is difficult to see them at close range to understand their purpose because of weeds (the access to the fortress instead is very well kept).
The image in the background of this page shows the ruin of a watchtower at the northern tip of the fortress. 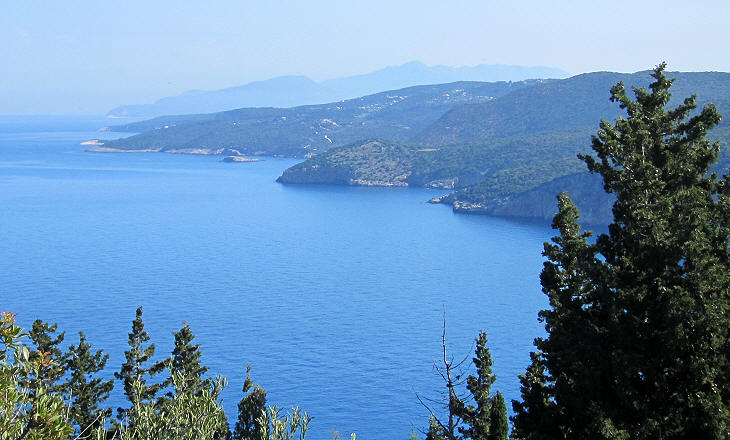 View from the northern tip of the fortress: at the far end in the distance Santa Maura (Lefkada)

The fortress enjoys impressive views towards the northern part of the island (the peninsula of Fiscardo) and beyond it towards the southern part of Santa Maura, an island which was in Ottoman hands when Asso was built. Santa Maura was conquered by the Venetians in 1684 and this fact reduced the importance of Asso. 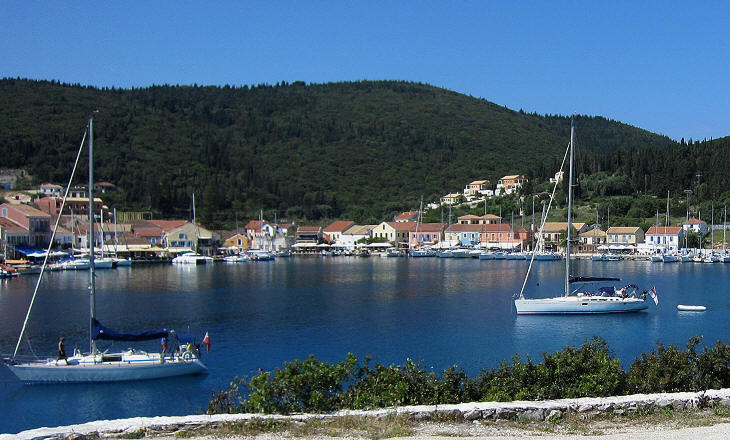 There is a Harbour on the East-side of the Island, where we cast Anchor upon our return from Zant to Venice. It is called Pescarda, proper only for little Vessels.
A journey into Greece by George Wheler, Esq., in company of Dr. Spon of Lyons - 1682
The master, not wishing to expose himself with his small vessel to its effects in this dangerous channel, (where with their short cables and small anchors they reached no ground,) quickly entered the bay Viscardo, situated near the cape of the same name. Thus we were sheltered against a very violent gale, by which, even in the bay, our vessel was very much tossed about. In the terrible currents of the channel it would have been inevitably lost, as it would have been thrown against the rocks of Ithaca. (..) The view of the bay, surrounded by its beautiful hills, is also very pleasing, On the south-west side lies a small church surrounded with cypress-trees; higher up is a small, village, delightfully picturesque; to the west a hill, covered by olives and myrtle-trees.
Christian Muller - Journey through Greece and the Ionian Islands: in June, July, and August, 1821
Fiscardo is the village where Robert Guiscard died in July 1085 of fever (probably malaria) and which is named after him. Robert was called Guiscard (the Cunning or the Resourceful) because of the ability he showed in becoming the ruler of Southern Italy. He then waged war on the Byzantine Empire and he occupied Corfu and Cefalonia. 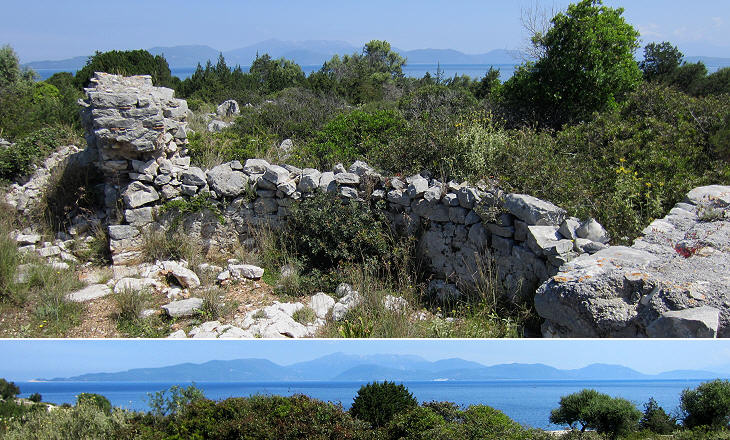 (above) Ruins of the apse of the church; (below) view of Santa Maura or Leukas

Taking advantage of this delay, I made an excursion on the beautiful hills, which in this spot were tolerably green. (..) On the north-side of the bay rises a hill, strewed over with large stones. On the top are the ruins of the castle Viscardo, destroyed by earthquakes. This is the famous Cape Viscardo, which in the wars on the Adriatic made so great a figure. The view from these ruins is one of the most interesting in the world. On the other side of the channel lies Ithaca; and the roaring of the sea, breaking against its rocky shores, sounds like distant thunder in the ear. Quite to the left is Leukas, or Santa Maura, and on its extremity the Leucadian rock. Muller
The hill which closes the bay on its northern side retains evidence of a large church, probably Byzantine, but it might have been restored and modified by the Normans when they conquered the island. Its size indicates that the village had a relatively large population. 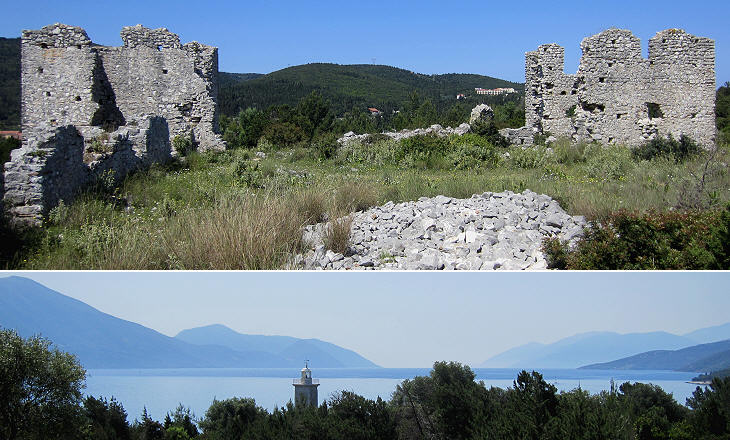 (above) Ruins of the bell towers; (below) view towards the channel between Ithaca (left) and Cefalonia (right)

There is to be seen here a little ruined Village, where nothing now remains, but a small Church, and some few Caloyers. Over against Pescarda is the Isle Thiaki, separated from it only by a Streight of three or four miles over; for which reason some call it Little Cephalonia. The likeness of its name hath made it be taken for Ithaca, one of the principal Isles of Ulysses his Kingdom. Wheler
At the back of the bay Viscardo I saw the sacred ruins of a Roman bath. Muller
The ruins of the church bell towers were thought to belong to a small castle, hence some travellers spoke of a Castel Viscardo at the northern tip of Cefalonia. The location of Fiscardo very near Santa Maura and Ithaca and relatively close to the Greek mainland favoured its development in antiquity. In recent years Greek archaeologists have unearthed traces of a Roman theatre and of several tombs.

Ithaca is witin easy reach from Fiscardo, but ...

As you set out for Ithaca
hope the voyage is a long one,
full of adventure, full of discovery.
Laistrygonians and Cyclops,
angry Poseidon - don't be afraid of them:
you'll never find things like that on your way
as long as you keep your thoughts raised high,
as long as a rare excitement
stirs your spirit and your body.
Laistrygonians and Cyclops,
wild Poseidon - you won't encounter them
unless you bring them along inside your soul
unless your soul sets them up in front of you.

Hope the voyage is a long one.
There may be many a summer morning when,
with what pleasure, with what joy,
you come into harbors seen for the first time;
may you stop at Phoenician trading stations
to buy fine things,
mother of pearl and coral, amber and ebony,
sensual perfume of every kind -
as many sensual perfumes as you can;
and may you visit many Egyptian cities
to gather stores of knowledge from their scholars.

Keep Ithaca always in your mind.
Arriving there is what you are destined for.
But do not hurry the journey at all.
Better if it lasts for years,
so you are old by the time you reach the island,
wealthy with all you have gained on the way,
not expecting Ithaca to make you rich.

Ithaca gave you the marvelous journey.
Without her you would not have set out.
She has nothing left to give you now.

And if you find her poor, Ithaca won't have fooled you.
Wise as you will have become, so full of experience,
you will have understood by then what these Ithacas mean.