View of the fortress from "Romeikos Gialos" the Greek cove

This island is called Lemnos by the Greeks, and by the Italian mariners Stalimene, from the Greek expression Eis te Lemno, when they speak of going to this island. Lemnos was first inhabited by a people of Thrace, then by the Pelasgians, and afterwards by the Athenians, until it became subject to the Romans. (..) The chief town Castro on the west of the island is about a mile in circumference, and probably the antient city Myrina was on this spot; to the west of it there is a high rocky cape, on which there is a castle very strongly situated; there are about eight hundred families in the town, and the number of Greeks and Turks is near equal.
Richard Pococke - A Description of the East and Some Other Countries - 1745
The town of Kastro, or rather the fortified enclosure from which it receives its name, occupies a striking position, which marks it out as the natural capital of the island. It is situated on a rocky peninsula, which projects westward into the sea from the recesses of a bay, and rises steeply in its centre to a height of 400 feet. On either side of the narrow isthmus which joins it to the mainland there is a rather exposed harbour, and that which lies towards the north is flanked by the Greek, that towards the south by the Turkish, quarter.
Henry Fanshawe Tozer - The islands of the Aegean Sea. Published 1890, but Tozer began his travels in 1874
A rock projecting into the sea protects two natural harbours: Romeikos Gialos and the smaller Tourkikos Gialos, thus named because they were close to the Greek and the Turkish quarters. The town is on the isthmus between the two harbours.

Views of the fortress from "Tourkikos Gialos", the Turkish cove

The approach to the fortifications is very striking, for the granite rocks of which the peninsula is composed rise steeply and stand out in the most fantastic forms, and in many places are stained bright yellow by patches of lichen. The mediaeval walls, of Genoese construction, enclose a wide area, running round the peninsula at about two-thirds of its height from the sea, and above this, at the summit, there is an upper castle or keep. (..) This peninsula was in ancient times the site of the city of Myrina, and is no doubt the place which is meant by Homer when he speaks of the 'well-built town of Lemnos'. Tozer
Kastro was renamed Myrina after the sea-goddess Myrine, who was worshipped in this gynocratic island: according to Robert Graves' The Greek Myths:
"The Lemnian men had quarreled with their wives, complaining that they stank, and made concubines of Thracian girls captured on raids. In revenge the Lemnian women murdered them all without pity, old and young alike, except King Thoas, whose life his daughter Hypsipyle secretly spared, setting him adrift in an oarless boat.
One year later Argo, the ship of Jason and his Argonauts, hove in sight of the island: the Lemnian women mistook her for an enemy ship from Thrace; they donned their dead husbands' armour and ran boldly shore ward, to repel the threatened attack. The eloquent Echion, Jason's herald, soon set their minds at rest; and Hypsipyle called a council at which she proposed to send a gift of food and wine to the Argonauts, but not to admit them into her city of Myrine, for fear of being charged with the massacre.
Polyxo, Hypsipyle's aged nurse, then rose to plead that, without men, the Lemnian race must presently become extinct. 'The wisest course', she said, 'would be to offer yourselves in love to those well-born adventurers, and thus not only place our island under strong protection, but breed a new and stalwart stock.'
This disinterested advice was loudly acclaimed, and the Argonauts were welcomed to Myrine. Each adventurer was surrounded by numerous young women, all itching to bed with him. Hypsipyle claimed Jason for herself, and royally entertained him; it was then that he begot Euneus, who eventually became King of Lemnos. Many children were begotten on this occasion by the other Argonauts too and, had it not been for Heracles, who was guarding the Argo and at last strode angrily into Myrine, beating upon the house doors with his club and summoning his comrades back to duty, it is unlikely that the golden fleece would ever have left Colchis."
Before the Greek conquest the worship of mother goddesses prevailed also in Anatolia, chiefly of Cybele and of the Ephesian Artemis. Smyrna most likely owes its name to Myrine.

The entrance to the fortress

The approach to the entrance, which is flanked by high walls, winds in such a manner as to impede an attacking force, and is defended at intervals by three gates, the two outermost of which are still covered with rusty plates of iron. On the face of the wall inside the first of these there is a short dedicatory inscription, bearing in its centre the monogram of the Palaeologi, which is similarly found in inscriptions in Samothrace. In both instances this is the emblem of the Genoese family of the Gatilusi of Lesbos, who intermarried with the imperial house, and whose principality during part of the fourteenth and fifteenth centuries included Lemnos, Samothrace and Imbros. Tozer
The walls of the fortress provide a good example of medieval defence techniques. The entrance is hidden between two towers and beyond the gate a double turn of the street made life difficult for the assailants.

The sun now descended in glory into a mass of filmy cloud, when suddenly from one side of this there arose a peak which had not appeared before, and the height and steepness of which caused me to exclaim with wonder. I knew it could be nothing else than Mount Athos, but for the moment this seemed impossible, for that mountain was fifty miles distant, and the object that I now beheld, being cut off by the surrounding mists both from land and sea, looked huge in its proportions. (..) Towards the north-west Athos towers above the sea, but at this time it was half shrouded in cloud. The sight of this peak recalls the statement which was widely circulated in antiquity, that its shadow reached as far as Myrina. Tozer
The fortress was built on the site of a very ancient acropolis: archaeologists have found here and in other sites of the island traces of very peculiar rites: the large number of oil lamps found during the excavations have led the archaeologists to believe religious ceremonies took place at night. Maybe it was in the period close to the summer solstice, when the gigantic shape of Mount Athos, invisible during the day, suddenly makes its appearance when the sun goes down behind it.

What's left of the main building and an intact gunpowder magazine

When we reached the entrance of the fortress, one of the sentries who were on guard undertook to convey to the commandant my request for admittance, and after a little time returned with a favourable reply. (..) Our perseverance after all was poorly rewarded, for the commandant, though he received us politely and entertained us with the inevitable coffee, allowed us only to go a certain distance round the enceinte within the outer walls, and declined to give us permission to ascend to the upper castle. The defences throughout are strong for a mediaeval building, and even as late as the year 1770 this fortress successfully resisted a three months siege by the Russians under Count Orloff; but it could not stand for a moment against modern artillery, and the precautions which are taken to prevent strangers from seeing it are ridiculous. Tozer
A few walls scattered in the vast area within the outer walls and openings in the ground leading to a net of tunnels give only a vague idea of how the interior of the fortress was structured. The only building which has retained its structure is a gunpowder magazine: to minimize the impact of explosions it was built below ground level and it was surrounded by thick walls (see that in the fortress of Zante).

In the part which I visited the only objects of interest were a large plain sarcophagus of white marble, and pieces of columns of the same material, apparently of the Byzantine period. I was rewarded, however, by a striking view which even the lower slopes of the peninsula command. Tozer
Here and there a broken marble column shows up on the walls of the fortress: nothing else seems to be left of the temples, the churches, the mosques built on the site nor of the residence of the governors of the island. The only reward following a careful search is a relief in a newly rebuilt wall. It has been carelessly walled upside down and only by flipping vertically the image one understands that it shows two XVIIth century Venetian coats of arms: the broken one belonged to the Querini, once the lords of Stampalia. 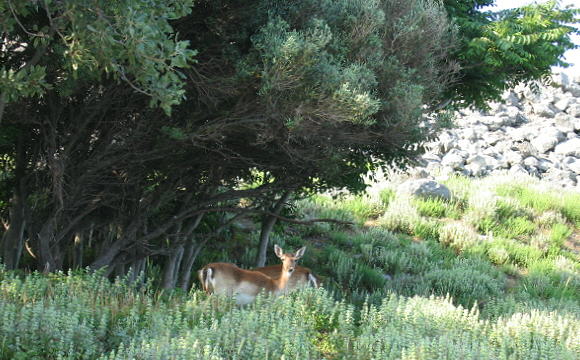 The shy custodians of the fortress

Usually one finds stray dogs or goats in these open historical sites, so it is a pleasant surprise to discover that a few shy deer are the only inhabitants of the fortress.