- Celebrated Augustus' Victory
(a section of the walls)

In 31 BC Octavian's General Agrippa defeated Antony and Cleopatra in an epic clash of some 800 vessels at the mouth of the Gulf of Arta (Amvrakikos Gulf) in north-western Greece, near today's Preveza. Octavian (Augustus) built a city near the site of the battle to celebrate this victory and named it Nikopolis (city of victory). The foundation of Nikopolis was not dictated solely by the desire to commemorate the victory, but it responded to military and trade needs. Nikopolis was founded at the narrowest point of the peninsula which closes the Gulf of Arta. 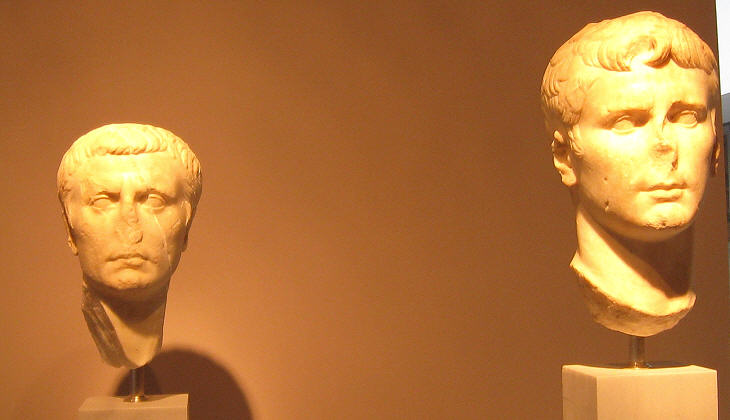 Marcus Vipsanius Agrippa is generally known as the son-in-law of Emperor Augustus, but the two were about the same age (in 31 BC they were in their early thirties); Agrippa married Julia, Octavian's elder daughter in 21 BC. Gaius and Lucius, the first two male children Julia bore to Agrippa, were adopted by Augustus who named them his heirs, but they both died before him (see the inscription celebrating Lucius in the Roman Forum). 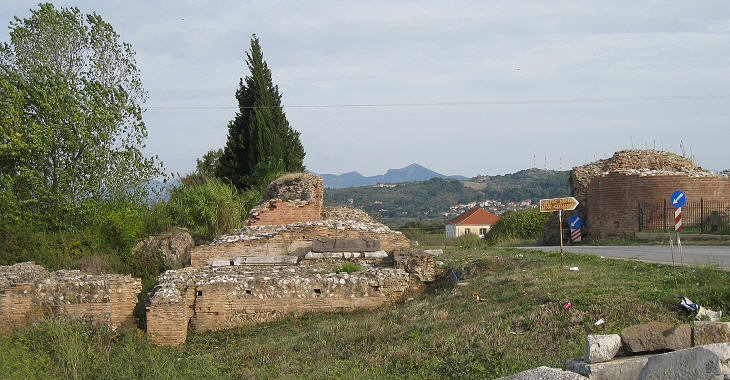 The Romans developed a standardized pattern for their military camps (castra) and for the fortified towns (coloniae) they founded to consolidate their rule in many countries (the suffix chester included in the name of many English towns is an indication of their Roman origin).
This pattern was used also in the design of Nikopolis. The town was divided into four quarters by two main roads and the quarters were divided into rectangular blocks.
Nikopolis flourished in the two centuries which followed its foundation and it had several large public buildings (baths, stadium, theatre, odeon), while an aqueduct provided it with fresh water. 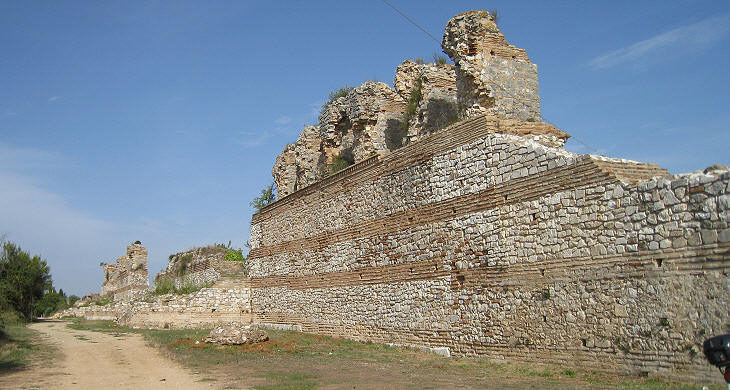 In the second half of the IIIrd century AD the pressure of the barbarian tribes could no longer be stopped at the Danubian border and Greece became exposed to raids. In 267 Athens was sacked by the Heruli.
The situation worsened in the IVth century: in 370 the Huns, a nomadic people of Central Asia invaded eastern Europe; the Germanic tribes who lived there were forced to move southwards and settled inside the northern border of the Roman Empire. These events coupled with earthquakes and pestilences led to a general decrease of the population which affected also Nikopolis. By the end of the Vth century its inhabitants realized they were too few to defend the whole city and they decided to fortify with new walls a section of the town which was approximately one sixth of its former size. 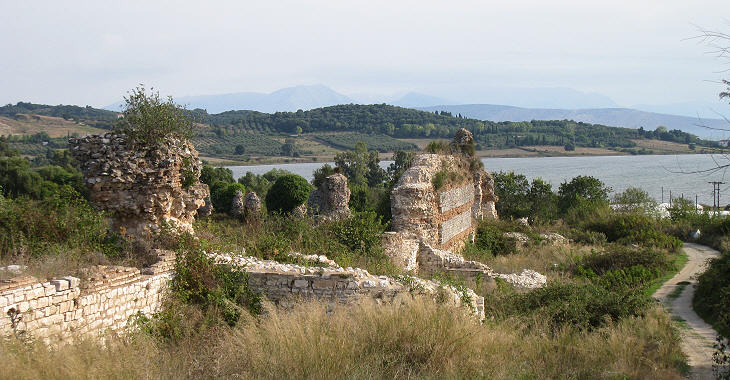 Byzantine walls towards the inner harbour

Nikopolis had two harbours: one on the Ionian Sea and another on a Gulf of Arta lagoon. The new town relied solely on the inner harbour which was mainly used by fishermen. 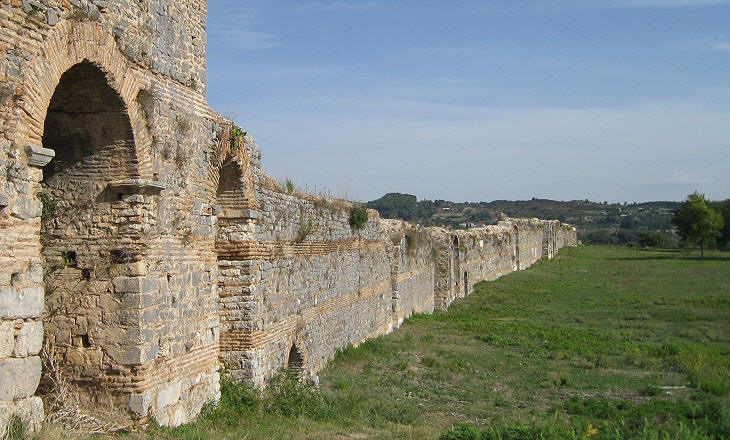 Views of the inner side of the walls

The new walls were built with the same technique used for the walls of Constantinople. Their horizontal white and red stripes are due to the use of alternate layers of stones and bricks. The buildings immediately outside the new boundaries of Nikopolis were pulled down and the resulting material was used for the walls: this explains why one can spot some reliefs or pieces of columns on them (the background of this page shows a Roman relief). 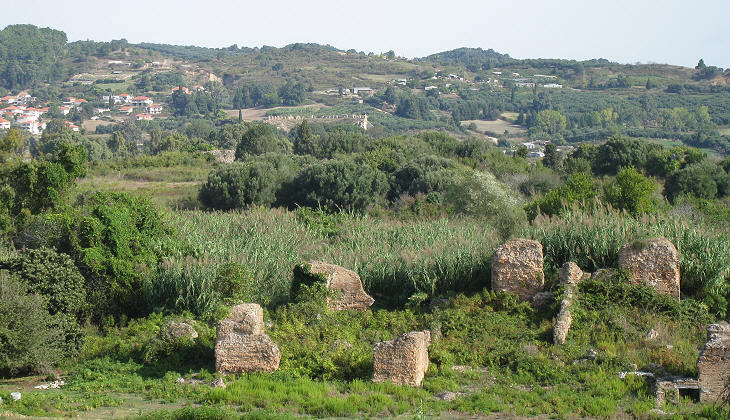 Ruins of Roman baths in the foreground, behind them the upper part of the theatre and to its left the hill from which Octavian watched the fight

The personal record of Octavian as military leader is rather poor; he chose to watch the fight from his tent on a hill north of Nikopolis; years later on that same spot he built a (lost) monument to celebrate the victory. 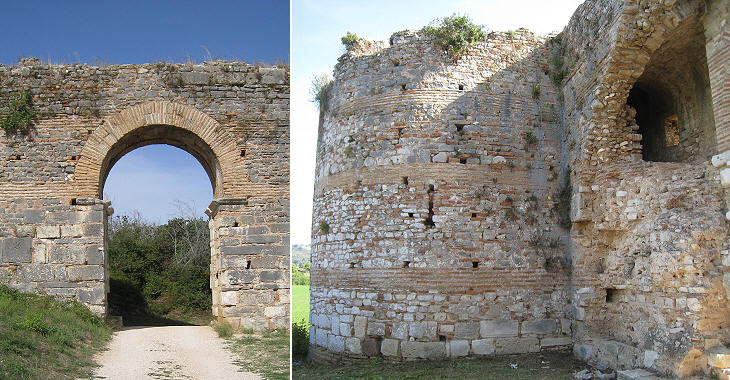 The main gate of Byzantine Nikopolis faced (at a certain distance) the Ionian Sea, which means the city retained a role in the trade between Italy and Greece; when the Byzantine Emperors established a new system of provincial divisions (thema) a large territory from the Gulf of Patras to southern Albania was named Nikopolis, although the actual administration was located in Nafpaktos. It is interesting to note that when the boundaries of Byzantine Nikopolis were drawn they did not include the Odeon, although this building stood very close to the new walls. This was probably due to the more severe way of life brought about by the Christian faith, which regarded entertainment with suspicion. 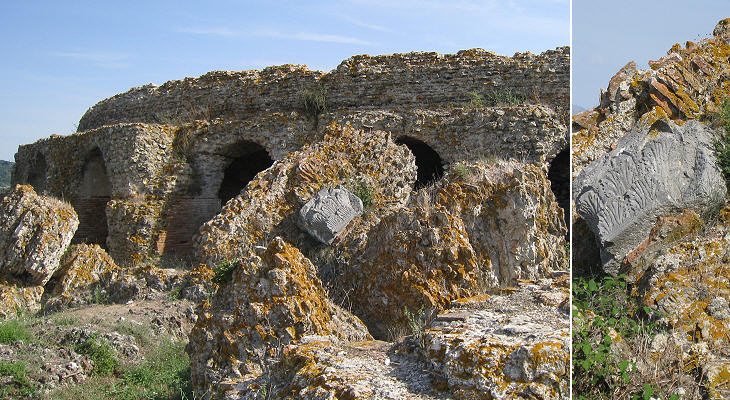 The mortar used for the construction was of such a good quality that it has kept together the bricks and parts of the decoration even after the upper part of the structure collapsed. 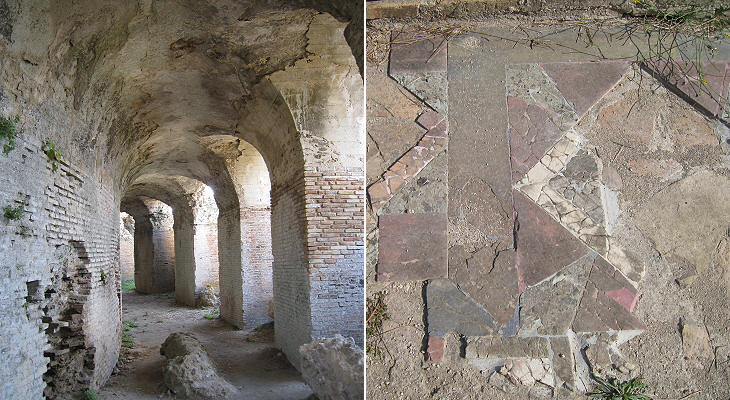 The steps where the audience sat were not cut into the rock of a hill, but they were supported by an elaborate system of vaults.

The first monument which travellers who arrived to Nikopolis from Italy saw was a double nymphaeum which was located near the western Roman gate; it was covered with marble and statues were placed in the niches. Unfortunately the first archaeological museum of Nikopolis was housed in a former mosque of Preveza which was destroyed by bombs during WWII with the consequent loss of all exhibits..

The use of mosaics for the decoration of floors and walls expanded greatly during the Late Roman Empire; this form of art, unlike for instance sculpture, continued to be highly regarded in Byzantine time; in Nikopolis a large VIth century basilica named after a bishop was decorated with a series of very high quality mosaics. The traditional portrayal of sea gods and goddesses was replaced by scenes of fishing and hunting. 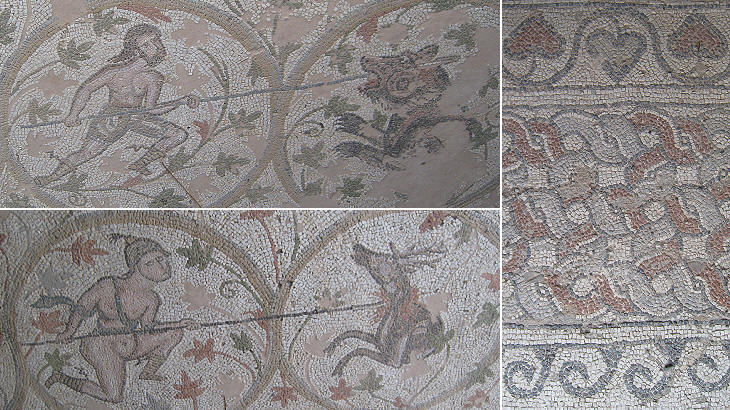 The decline of Byzantine Nikopolis was due to a series of raids by the Arabs in the IXth century and by the Bulgarians in the two following centuries. Eventually at the end of the XIth century the last inhabitants abandoned Nikopolis and founded Preveza, a new town at the southern tip of the peninsula. 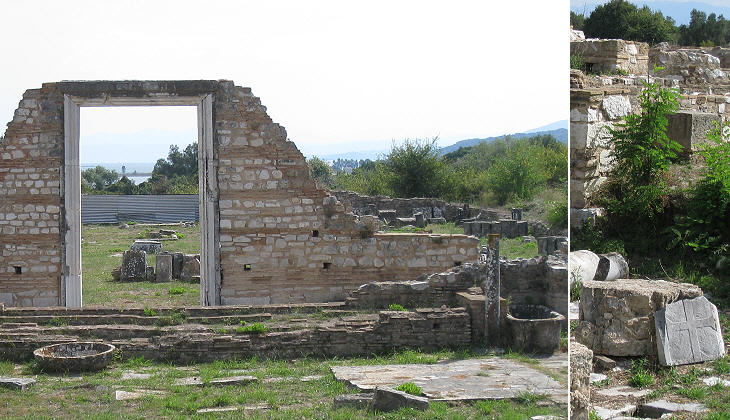 The archaeological site of Nikopolis covers many square miles and excavations are still going on. The area inside the Byzantine walls shows evidence of several basilicas, early Christian churches which have the shape of a Roman building used for law courts and assemblies. The walls of these basilicas had alternate layers of stone and bricks and the interior was split into naves by rows of columns.

The area between the northern Roman walls and the hill where Octavian watched the fight was called Proasteion and it was the temenos (sacred land reserved to gods) where every four years the Nea Actia games were held. These games were promoted by Augustus and they continued to be organised until the middle of the IIIrd century AD. This explains the presence of large baths in this area. 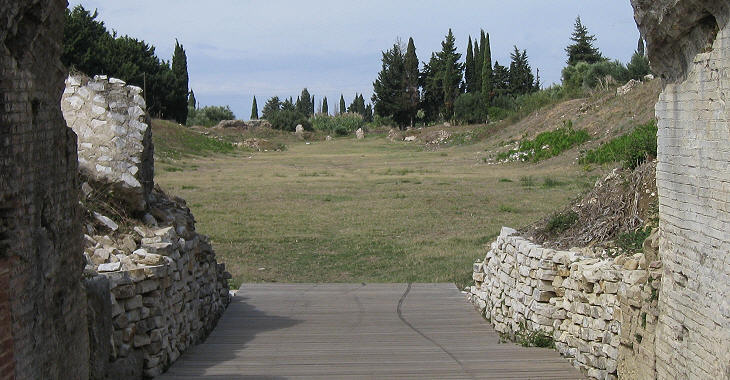 The design of the stadium is similar to that of Afrodisias, but unfortunately it retains only a pale shadow of its former grandeur.

The games included a variety of competitions including poetry, singing, cithara playing and mime which were held in a large theatre.

Arta was founded in the VIIth century BC by Corinthian settlers (its name was Amvrakia). The decline of Nikopolis favoured the development of Arta which was located inland and on a fortified hill.

Today Arta is mainly known for its Ottoman bridge on the river Arachthos, which is very similar to the bridge of Mostar, destroyed during the 1990s ethnic fights in Bosnia (you may wish to see Malabadi Koprusu, a similar bridge in eastern Turkey). 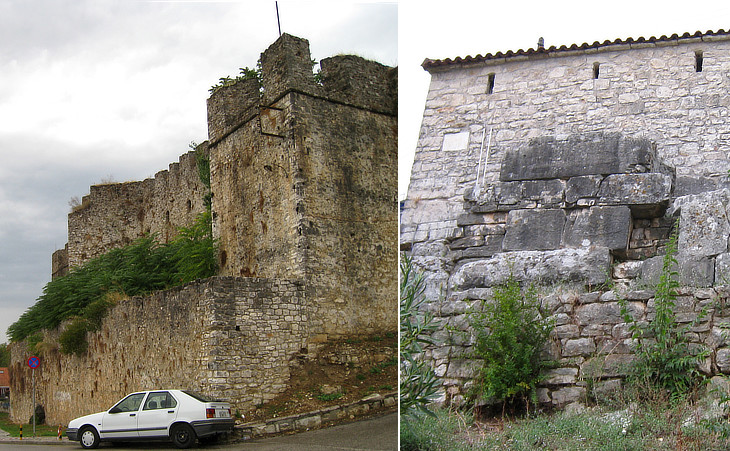 Arta has a well preserved XIIIth century Byzantine fortress which was strengthened by the Ottomans. At the fall of Constantinople in 1204 the Byzantine Empire collapsed, but the region of Arta remained in Byzantine hands because it became the capital of the Despotate of Epirus, a state founded by Michael Doukas, a cousin of the former emperor. It was a golden period for the town which was embellished with many fine churches and monasteries. 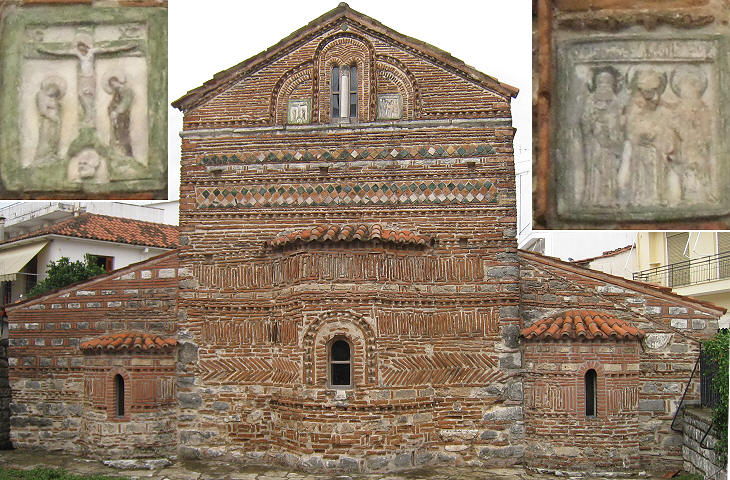